Blogger and the92.net co-founder pb1uk recalls a memorable day groundhopping moving 2 rungs up the 92 club ladder within an hour of one another.

My dad and I used to go on sporting holidays in my teens, we’d stay at relatives in the midlands (we live down south) and take in as many games as we could within 10 days at the start of the season. We had been to a fair few Reading games in the 2001/02 season, as a family friend was a season ticket holder. The Royals secured promotion and they started the new season in the second tier away to Derby. Seeing as we were in that neck of the woods that was set to be where we’d kick off our footballing holiday. Looking down the fixtures for the first day, the encounter between Walsall and Ipswich at the Bescott Stadium had been moved to a 5.35 kick off, we couldn’t make that too could we? Onto the AA route planner and a journey of just under 40 miles was the distance between the two stadiums- as we were heading back to the other side of Birmingham it was ‘en route’ so to speak and an opportunity not to be missed.

Pride Park was packed, it was the classic opening day encounter that the fixture computer tends to throw up – Derby, relegated from the Premier League against Reading, promoted from the then Division Two. The first half was a cagey encounter, the home side had the majority of the play, but found it difficult to break down a stubborn congested Reading midfield. The second half was a different story though as the Rams showed the class that areas of the squad had maintained from the Premiership. Quick fire goals from veteran Newcastle legend Rob Lee on 61 and extravagant Italian Fabrizio Ravanelli on 63 put the game far beyond doubt before promising young striker Malcolm Christie put the icing on the cake. 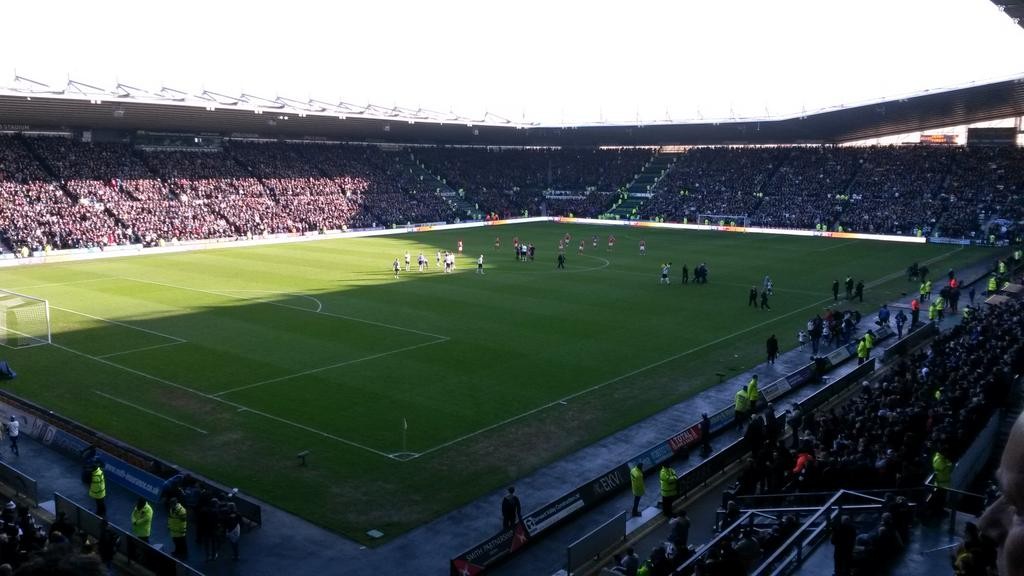 Pride Park, now the iPro packed for this seasons a52 derby

Now usually we aren’t ones to leave a game early, but with being neutrals and the result cut and dried as injury time began we ‘legged it’ to the car in the hope of a quick get away. Luckily the escape was just that and we shot down the A38 Bescott bound. With the ground easy to find, we found a place to park and proceeded to sprint to the turnstiles. Imagine our shock when our out of breath request for admission was met with the Brummie stewards response “sorry mate it’s all ticket”. Crest fallen, headed back to the car.

As we were 50 yards away from the stadium my old man turned to me and said “wait here” and ran off to the car. He returned, brief case in hand, and told me to follow him, he had a plan. Now I should let you know my Dad’s a freelance journalist and mainly covers horse racing and bowls – but we rushed up to the main entrance, Dad flashed his press pass, the door was opened and we were in!

If you haven’t been to the Bescott it’s not the biggest of stadium. We were let in the front double doors at the main entrance to the ground and pointed to another set – we burst through those and we were straight in to the tunnel! We gingerly walked out of the tunnel, past the Ipswich bench and hopped over the advertising hoardings and into the crowd. Before I get any pelters in our defence we did try and pay to get in and on the inside there was definitely space for two more! Ironically a couple of years later I got refused entry to the same ground, but that’s another story. The game too was decent and we hadn’t missed any of the crucial action. The Tractor Boys, relegated with Derby from the Premier League the previous season, ran out 2-0 winners. The impressive Darren Ambrose bagged the first on 37 with Marcus Bent also getting on the score sheet midway through the second half.

You can keep up with Peter’s 92 on his the92.net profile here. Have you been to the iPro or the Bescott before? Add the them to your 92 here www.the92.net/grounds or plan your trips using our away day planner here www.the92.net/plan-your-away-day/.