A visit to the Stadio Atleti Azzurri d’Italia

I am lucky that work had sent me out to our office in Northern Italy for a couple of days. With a choice of either Milan or Venice to fly into, I started scouring the fixtures, to see if I could fly a day earlier and get a quick ground in. One immediately popped up, just a short bus ride from Milan Bergamo Airport. Bergamo is a Ryanair hub, which plays on the fact it is about 40 minutes from the center of Milan. However, Serie A stalwarts Atalanta play in Bergamo. There is a wealth of clubs, ergo stadiums, in this Italian football corridor. There is plenty of choice of Serie A and B clubs just a short journey from Bergamo. I’d enjoyed pictures I’d seen of Stadio Atleti Azzurri d’Italia and so it was done. I’d chosen my destination for my third Serie A ground.

A panoramic of Stadio Atleti Azzurri d’Italia with the Curve Nord at the opposite end and foothils of the Alps behind the 10ft barrier.

The Hunt for a Ticket

Despite initial struggles to find somewhere to safely store my bags, I started my ticket hunt. The club website was as much use as a chocolate fireguard. The club shop in the center of Bergamo didn’t sell match tickets (and replica shirts were €92!!). The one suggested directly near the ground was shut. I asked some friendly stewards, who pointed at something that I’ve seen used as ‘toilets’ on my travels of the 92.

A masquerading disorganised queue streamed from the furthest side of this hut from me. I need a ticket mate, not a piss. I ambled over, dodging the odd scooter, and saw a handwritten sign slapped to the side of the windows on this hut. The stand, then price scribbled down. After queuing around a car for about 15 minutes, I ordered the only ticket I could afford. In the Main Stand, I’d be looking at a casual €240. The most expensive hitting the €300+ mark. I’d landed a ticket in the Curve Morosini for €20, the opposite end to the well-renowned Curve Nord, home to the impassioned Atalanta fan. The Morosini, I had read, was still impassioned, but more of a family stand. 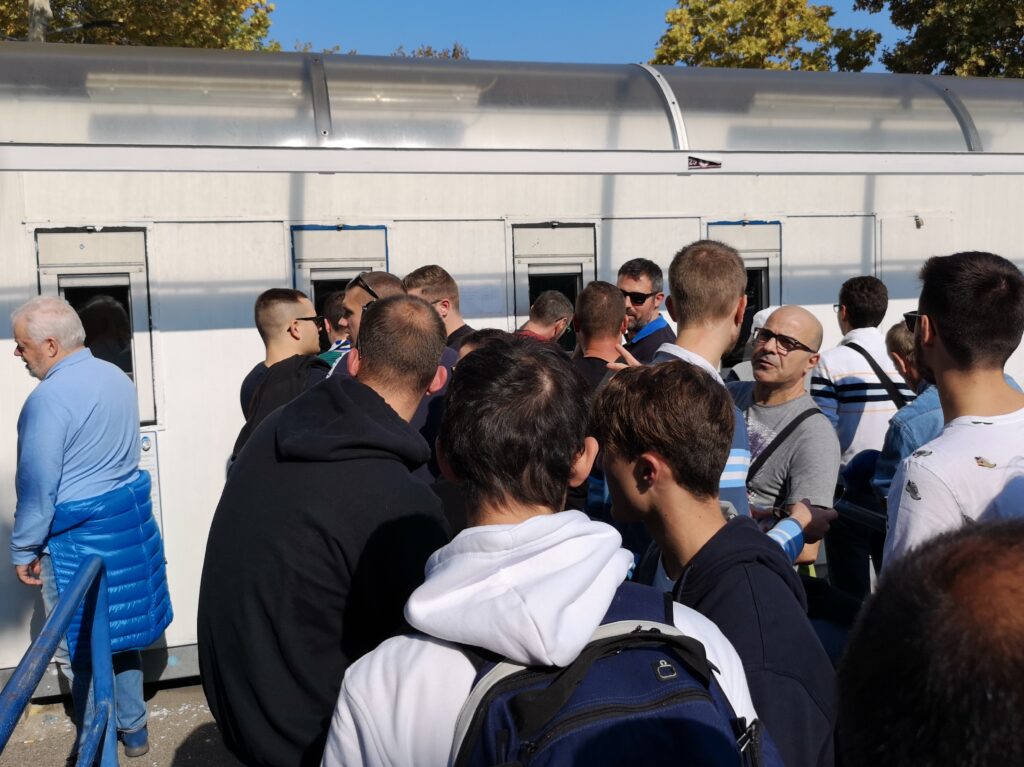 The tiny ticket office, that transpired wasn’t a toilet! The small handwritten note in the centre of the image.

Getting into the Ground

With 20 minutes to kick off, I swirled a quick ‘birra’ down and joined the hordes of fans entering the stand through the one entrance to the Stadium. Despite it being early October, it was a casual 24 degrees and the approach with several thousand Italian fans got a little sweaty. Once I’d got through the sweaty crush, it was just a case of the full ticket and passport check. Thereafter my lighter got taken as contraband. With Italian football suffering with waves of violence, racism, and fascism, the authorities have taken more of a hard-line approach on the fans than we’d ever expect in the UK.

The Curve Morosini was an odd stand. The Stadio Atleti Azzurri d’Italia had recently been purchased by Atalanta from the local authority. The decrepit running track I’d seen in older photos had been ripped up and temporary metal stands placed in front of the giant curving concrete stands. A 10-foot tall transparent barrier separated the fresh playing surface from the concrete and metal home vantage point for the fans. I tiptoed through the throngs of supporters to a part low on the upper concrete section, near the corner with a nice elevated view of the pitch. The Italian Alps appearing over the back of the Curve Nord, whilst also having the Sampdoria fans on the opposite section of the stand. The fierce segregation reminiscent of late 80’s football in the UK. 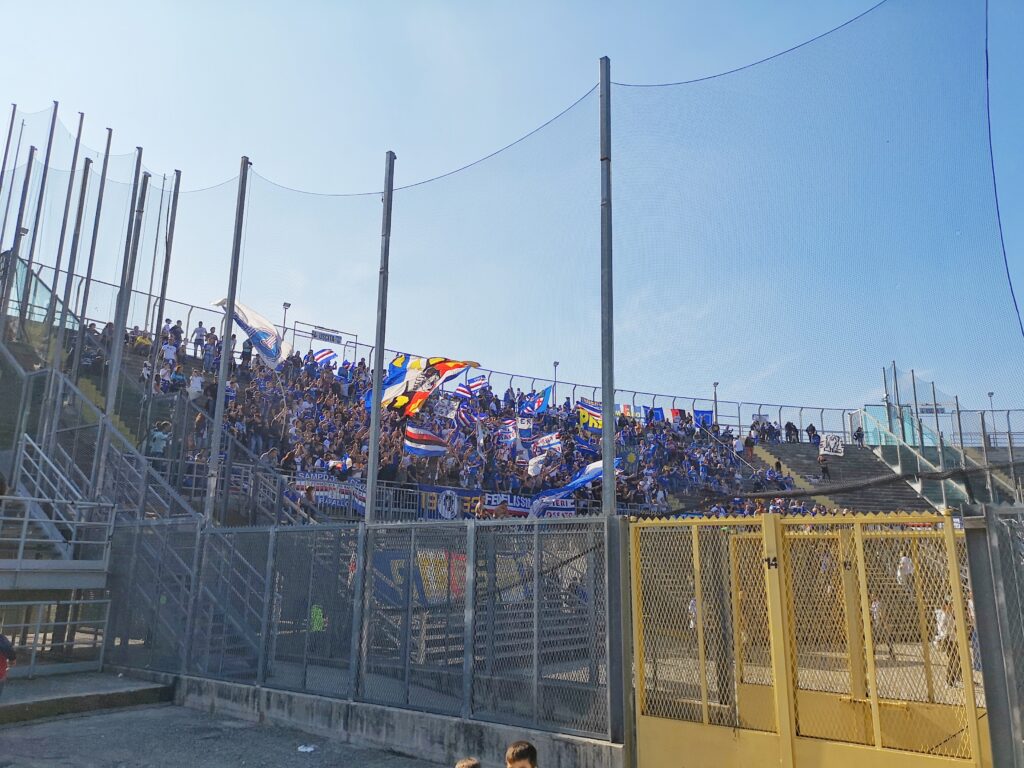 The segregation of fans with large netting and heavily barbed fences. 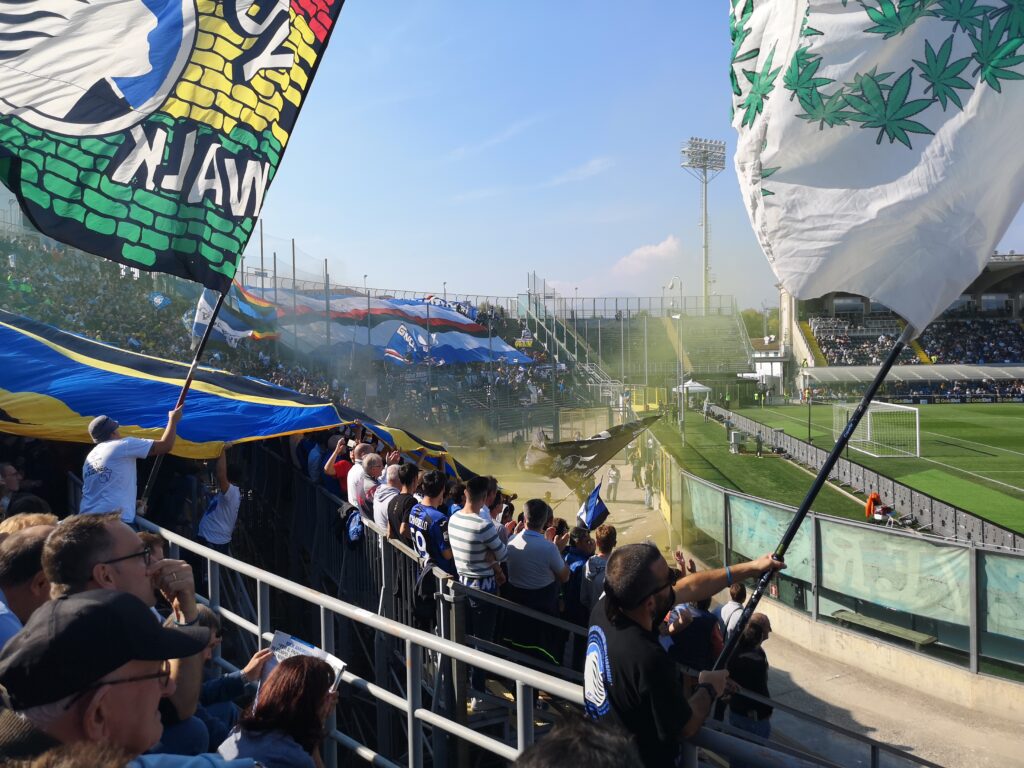 Meanwhile the fan display in Italian football is worth the entrance fee alone.

With the sun glistening, the game got underway with a rippling banner of an old club crest. Several flags and flares being waved about too. The rich smell of the nitrates passed across my nostrils as the football was passed tepidly. Atalanta looked the better of the teams, carving a chance out down the left. A well-worked move from a corner swinging the ball toward the back post, with the forward nodding the ball back across onto the abandoned post from 10 yards.

A little later, a quick interchange created space down the right-hand side, the pace of Alejandro Gomez got him between two defenders; his screaming shot testing the other side of the goal frame. The half time whistle went. The crowd subdued. Two fine chances to give Atalanta the lead, a team that hadn’t won in 8 games.

Floodlights in the Glaring Sun

The second half started at pace, Atalanta still playing the better football. Despite the strong sun, the floodlights were on. The clock was ticking down, and the apprehension in the crowd was clear. The pryo and flag waving had stopped, the chanting turned to murmurs. Despite the Sampdoria keeper being the busier, the inevitable happened. In the 77th minute, a corner from former Premier League flop Gaston Ramirez was powerfully headed in from unmarked on-loan Napoli defender Lorenzo Tonelli from the edge of the box. 1-0. The inevitability was accepted rather easily in the Stadio Atleti Azzurri d’Italia. But the fans stirred, getting behind their team. The Sampdoria fans also pumped up their pyro as they continued to celebrated a goal against the run of the game. 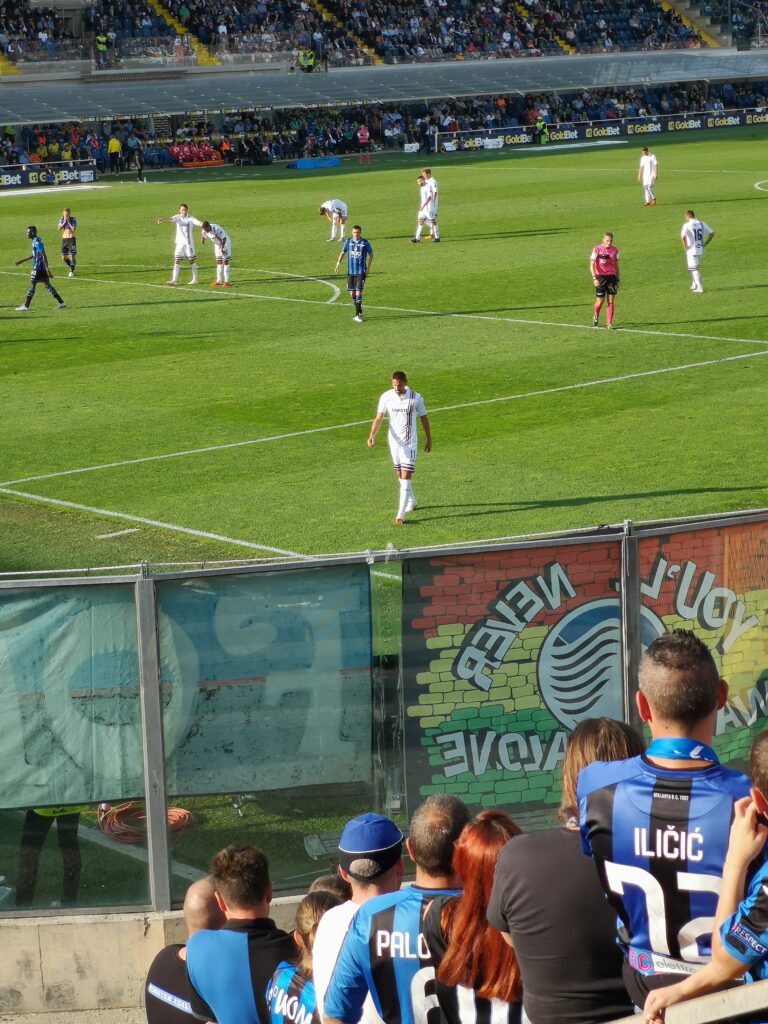 Ramirez moments before he assisted from the corner.

Atalanta pushed forward. Ex-Middlesbrough midfield Martin de Roon pulling the strings and driving the game forward. For the final 4 minutes, Atalanta had such the better of the game that the keeper went up several times for corners, staying up for a prolonged period at one point. But it wasn’t too be. The final whistle went and the still full Stadio Atleti Azzurri d’Italia appreciated the players’ efforts. It wasn’t for lack of trying, it just wasn’t to be their day. An inspired performance from Juventus loanee Emil Aduero in goal the difference between the teams.

Both teams stay to be saluted by their faithful fans. I took my time to let the crowd disperse because I wanted to soak up the setting of this stadium in the foothills of the Alps, therefore getting higher up the stand. I descended the steps sad to have seen such a valiant effort not rewarded with a win. A neutral before the game, sure, but having watched that, I now have another black and blue striped Italian to follow.

You can keep up with Michael’s 92 and other groundhopping on his the92.net profile and on Twitter @mossintheworld.