Blogger and the92.net co-founder Pete reports back on a trip to the North East. Taking full advantage of the Easter football bonanza Newcastle was the first stop of a 2in1 weekend doing the 92.

Last summer when I was planning the assault on my 92 over the 16/17 season, Easter was a weekend earmarked as a 2-in-1 opportunity. With games from the top 4 divisions of English football split over 4 days including a double round of EFL action, it was the perfect chance to get 2 ‘long haul’ grounds ticked off; providing the matches fell kindly. With pockets of grounds to tick off in Wales, London and the North-East I waited for the fixture release with baited breath.

The fixture computer must have been listening too, as it worked its magic with both Newcastle and Sunderland due to play at home on Easter Saturday. With no chance of both of them playing at home on the same day, closer to the date Newcastle’s home game with Leeds was moved to 7:45pm on the Good Friday. With permission from the wife granted, a Travelodge was booked and it was game on!

Not having been to Newcastle before and with an evening kick off, I was eager to get there and explore the city. There was the potential to do Hartlepool on the way up who were playing at 3, however this wouldn’t have left time to discover the city. With 4 places in particular I wanted to see I thought best to leave Victoria Park for another day.

1. The Angel of the North

With the start of a 4-day weekend naturally the roads were busy. However, with the trusty accompaniment of Google Maps offering regular diversions, when it found a quicker route in a shade over 3 and a half hours I was at my first stop; the Angel of the North. Often associated with Newcastle, the sculpture is in Gateshead and an eye-catching landmark it is too. With ‘the92.net on tour’ flag in tow it was the perfect opportunity for a photo; if only I had a similar wingspan you would have been able to see all the letters on it! 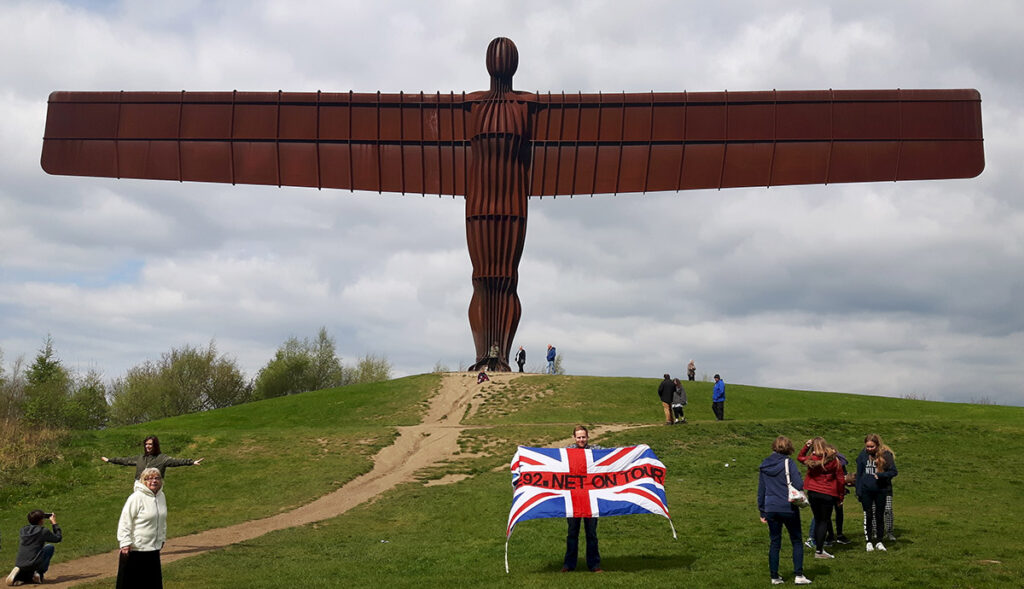 Looking at the route to the hotel, and given there was plenty of time, it would have been rude not to pay a quick trip to the Gateshead International Stadium, the home of Vanarama National side Gateshead. Had the Newcastle match been moved to the Sunday there would have been the chance to see Gateshead face Lincoln on Easter Monday. Four new grounds in four days would have been amazing, but a lot to ask the footballing Gods. Instead I had to make do with a walk around the perimeter with a few pictures over walls and through gaps. 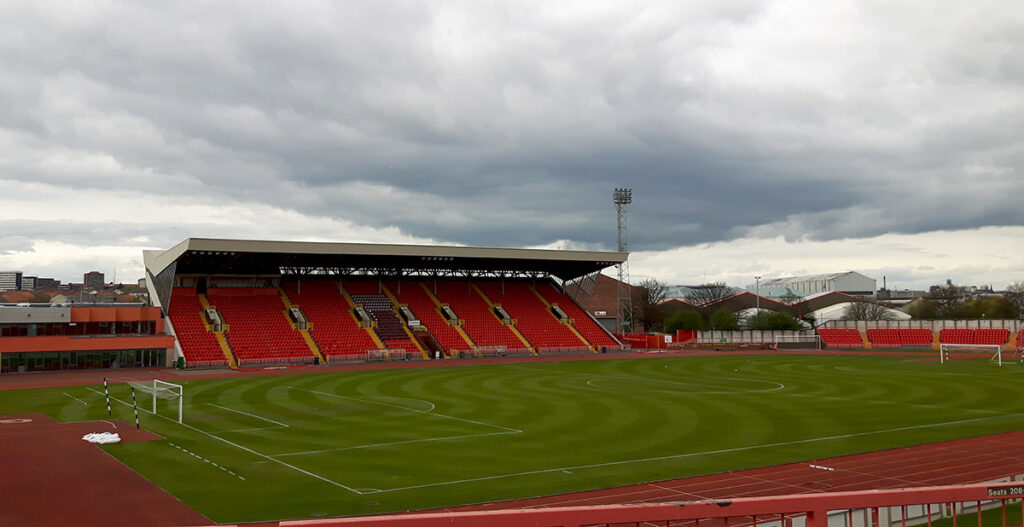 I’m yet to meet a supporter who is a fan of a ground with a running track. In Gateshead’s case along the touchlines the stands don’t look too far back from the pitch with the view looking ok. Behind the goals looks like a different story though!

3. ‘A Football Perverts’ Paradise’ (their words not mine!)

Aside from soaking up the pre-match atmosphere, the main reason behind getting to Newcastle early was to visit ‘The Back Page Shop’. Described as the heading above in their Twitter profile pic, they bill themselves as the world’s largest sports book shop with football programmes, signed memorabilia, match worn shirts and much more. If like me this list ticks a lot of boxes for you, make sure you leave a generous chunk of time for a look round. Wanting to get a ground-related souvenir, initially my eyes were drawn to a number of vintage replica stadium signs. Pre-empting the look on the wife’s face taking a 3-and-a-half-foot sign home I came away with a safer option; a coaster of St James’ Park. 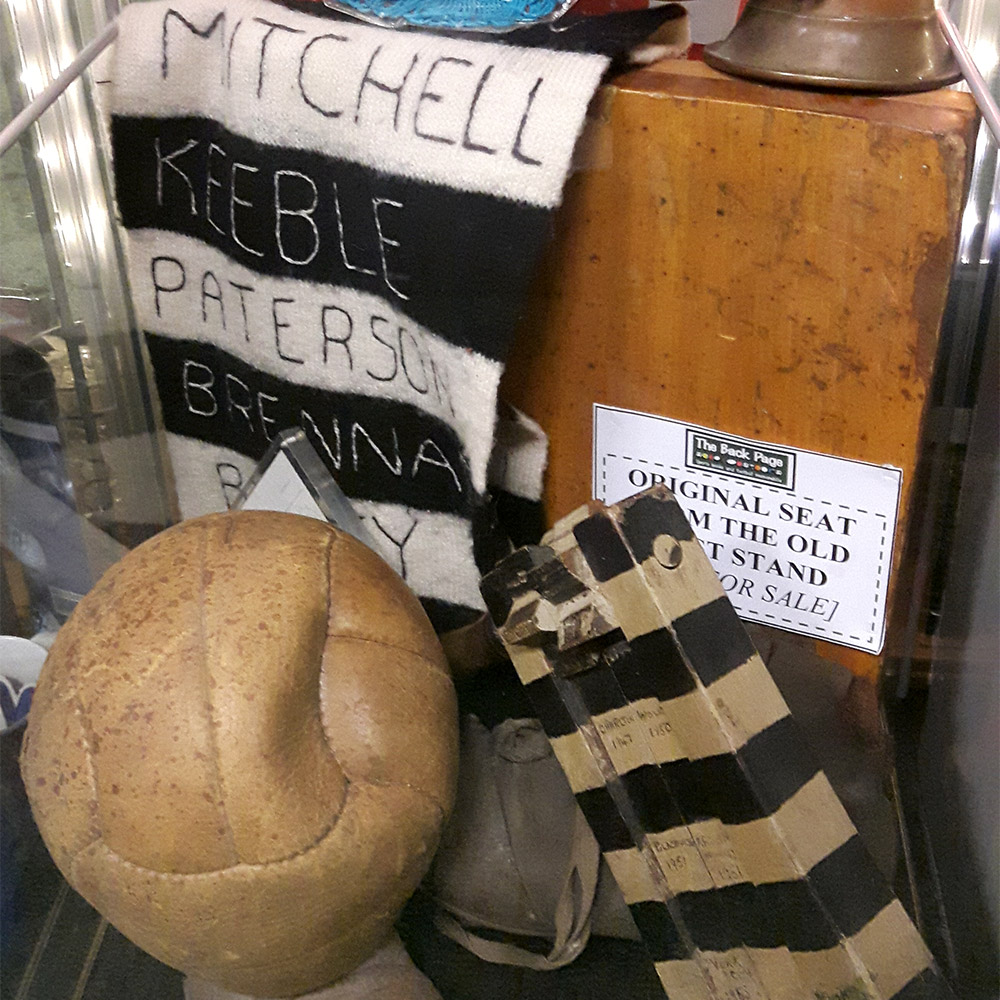 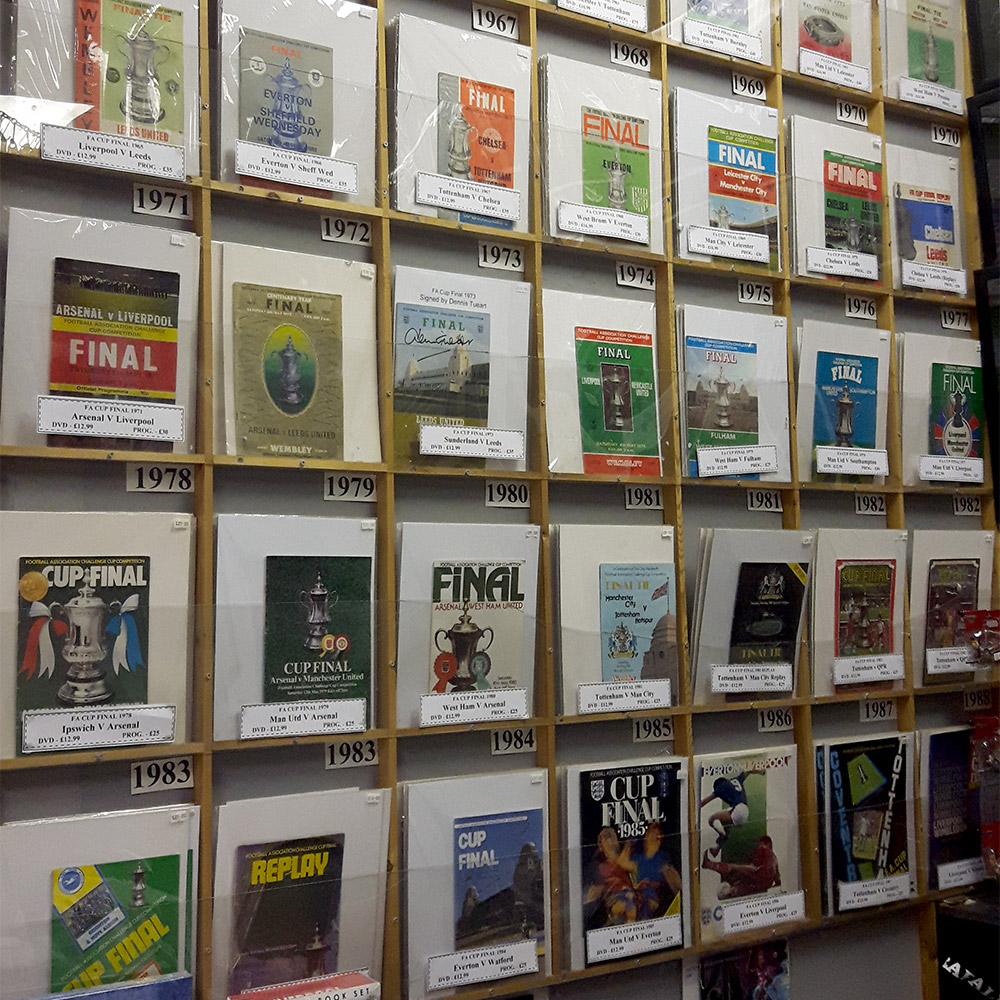 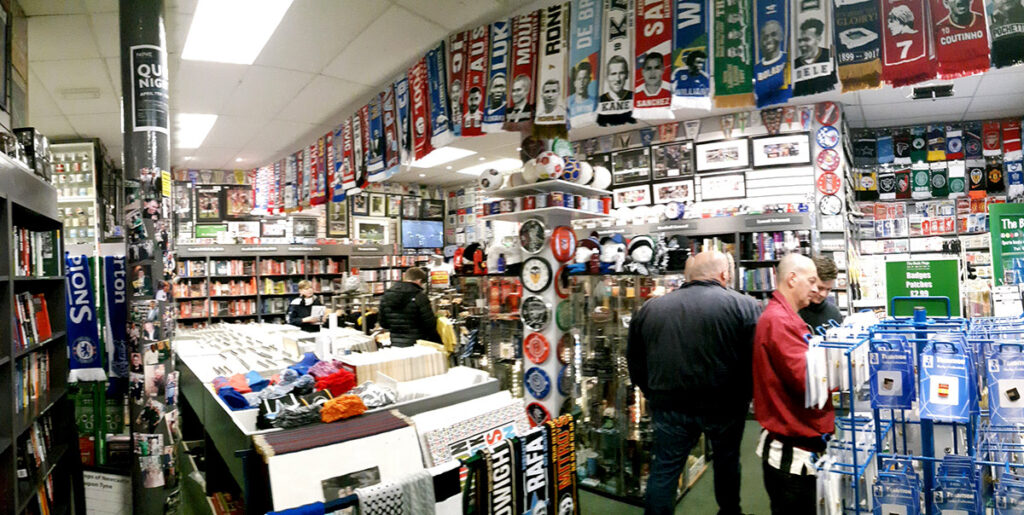 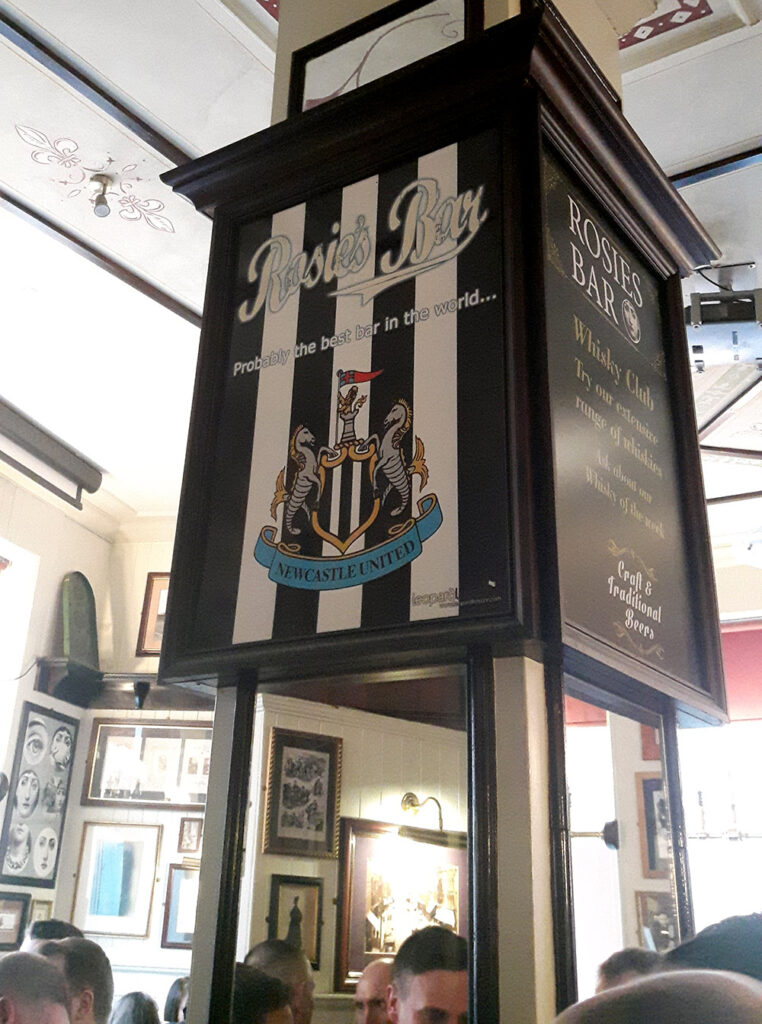 With title rivals Brighton kicking off at 5pm away to Wolves, the pubs around the ground were packed. The atmosphere was tense with 2 points separating the pair at the top of the table; if Brighton slipped up and Newcastle took advantage the Toon would be back in pole position for the league. Conveniently down the road from the Back Page Shop was a pub that had cropped up in a number of recommendations on Twitter; Rosie’s Bar. Sat on the edge of Chinatown next to the Arch, the match on Sky and in view of the Gallowgate the small traditional corner pub was the ideal pre-match location.

And it was here that I met my local tour guide, Colin (@colinpodge). Running the92.net it has been great to build up a groundhopping community on Twitter over the past few years and hear about fellow fans’ journeys. When sharing my plans for Easter, Colin got in touch. A season ticket holder for decades at St James’, he kindly offered to get me ticket for the Leeds game when they went on sale and through a contact source a free ticket to the Stadium of Light the following day.

Over to you Newcastle

With Championship Player of the Season Anthony Knockaert bagging a brace at Molineux, it was back over to Newcastle. Colin and I finished our pints and headed off to the match. After walking through the arch Colin gave me a whistle stop tour of the outside of the stadium taking in statues of Sir Bobby Robson, Alan Shearer and Jackie Milburn, the old St James’ Park gates and the Alder Sweeny Memorial Garden. The latter a lasting tribute to the 2 fans who were killed on board Malaysia Airlines flight MH17. 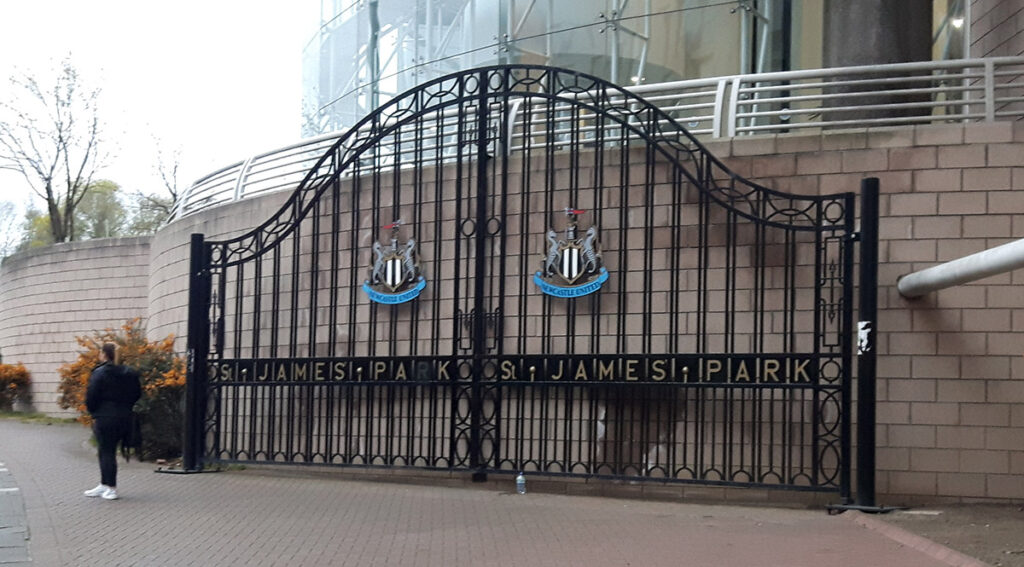 For the game I was in the East Stand. With season ticket priority for ticketing, Colin was able to secure me a ticket with a great vantage point in row G, midway between the halfway line and the Gallowgate. Coming out of the concourse for the first time and seeing the vast structures of the Milburn and Leazes Stand lit up under the lights was quite something. With closed corners and steep stands the stadium is a fantastic arena for football and soon to be packed with over 50,000 fans. 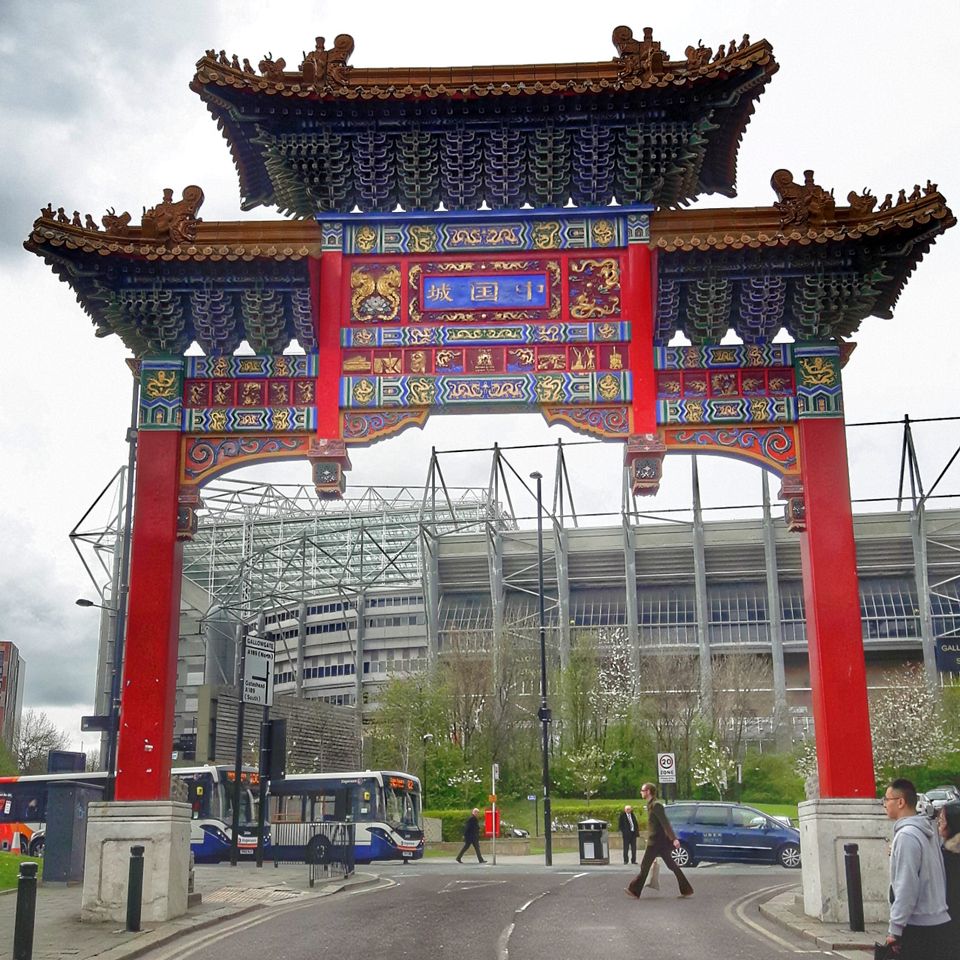 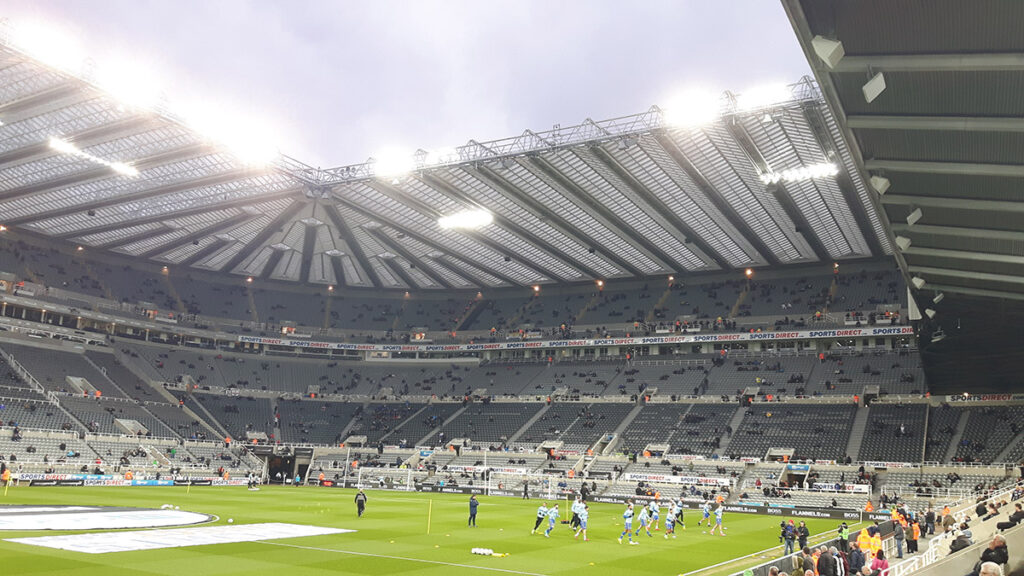 With a warm welcome from the block E regulars we discussed Newcastle, Southampton and grounds, sharing stories over a pre-match pint before taking our seats. The game started at quite a pace with both sides eager to get going, and it was the visitors who came closest to taking an early lead. Alfonso Pedraza’s curling strike from outside the area had Darlow beaten but cannoned down off the underside of the bar. The high bounce of the ball gave Darlow just enough time to recover and get a hand to Roofe’s follow-up header. 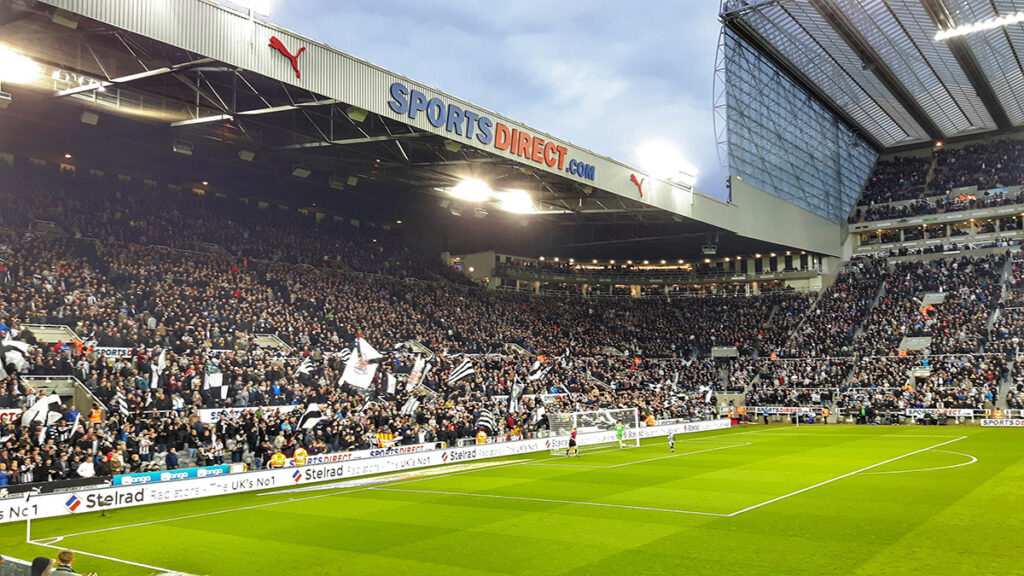 After surviving the early scare, the home side went on to take control of the game. After Shelvey almost scored direct from a corner, Gouffran then smashed the post from all of 20 yards. The ball shot back to Ritchie who took aim only for Pontus Jansson to heroically throw himself in the way to deflect the ball over. Still the pressure grew but Leeds defended well from set pieces. From corners Green saved a powerful header from Mbemba and Perez had a goal bound effort deflected wide.

The second half continued in the same vein with yet more pressure from the corner ball. Mbemba looked to be pulled down at the far post by Ayling whilst attempting to reach a flick on, but no penalty was given. Finally, though the Toon got the goal their pressure deserved. A corner wasn’t properly cleared and possession was recycled by Anita who found Gouffran. The Frenchman’s cross was headed back across the area and found captain Lascelles whose header Rob Green couldn’t keep out.

Put the Game to Bed?

From there Newcastle had chances to put the game to bed. The most notable chance fell to Perez, but he could only direct the ball straight at Green, flying in to meet a cross a few yards out. With the game ebbing away and the home side running the clock down, a fan from the corner of the Gallowgate ran on the pitch. Usually I wouldn’t mention this but it turned out it was a Leeds fan in the home end.

Clearly the worse for wear after a few Bank Holiday ales, the fan made his way over to Rob Green bowing before the keeper before shaking his hand. He proceeded to try and shake the hand of Jansson, but received a frosty reception from the Leeds centre half before being taken down by a steward. The man clearly had somewhat of a death wish too, with a group of stewards taking him across the front of the Gallowgate he was giving what he could to the home fans and getting a whole lot more back!

Anyway I digress; but for good reason, this interruption led to 5 minutes of added-on time where there was to be a sting in the tail. Sub Jack Colback committed a classic yellow card foul on half way as Leeds tried to break. Granted this stopped the attack but suddenly meant the Magpies were now camped on their 18-yard line.

From this position, Newcastle couldn’t get out as Leeds kept hold of the ball; Hernandez finding Roofe in space. The forward’s in-swinging cross from the left found the onrushing Chris Wood in acres of space, and the Championship’s top-scored clinically finished. After a very quiet game for the New Zealand front man he made his mark with the clock on 94:40. 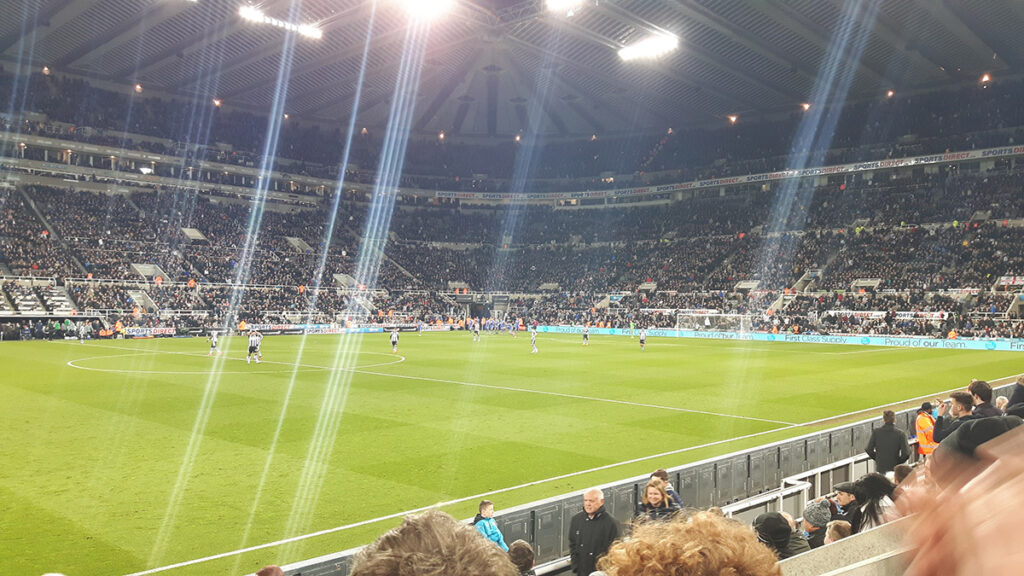 The Leeds players celebrate in the far corner

As a neutral it was an enthralling game of football to watch. Even the most hardened Leeds fan must have to admit they stole a point in a game Newcastle dominated. Despite possession being fairly even with 22 shots and 19 corners, the home side should have won comfortably. But with only four of those shots being on target and from what I recall those being straight at the keeper, it was clear they were missing the finishing of top scorer Dwight Gayle.

Atmosphere 4.5/5: There was a real buzz throughout the game from the highest Championship crowd of the season; 52,301 (I like to think I was the 1 )

Stewarding 3/5: Not noticed where I was but should have dealt with the pitch invader much quicker.

Often, I get asked when talking about doing the 92 why I go mostly as a neutral nowadays and this was the perfect example. The North East is known for being a community with football at its heart and going to the game as a neutral I was able to experience the match day as a home fan; discussing the game with the locals’ pre-match plus getting a ticket in a great position. This wouldn’t have been the case had I visited with Southampton, where I would have been up in the gods a quarter of a mile plus from the pitch and certainly wouldn’t have been able to get into Rosie’s, especially wearing red and white stripes!

Have you made the trip to the home of the Magpies? If yes, you can tick St James’ Park off your 92 grounds checklist or if not plan your trip there: