Blogger Tim Dove makes the long journey down to St James Park Exeter to take his total doing the 92 up to 90 as the curtain comes down on the Football League season.

Thoughts on the ground:
There’s a real mix to St James Park as is common with other clubs in the lower divisions who haven’t moved to new stadia recently. Specifically, there are two terraces and one of these is covered. The other two stands are both all-seating stands but only one runs the full length of the pitch. The uncovered terrace and the shorter length stand are both older and reflect the clubs history. 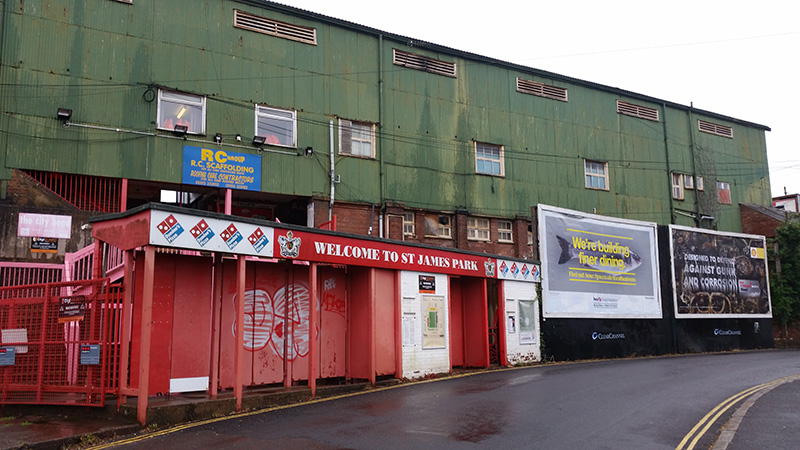 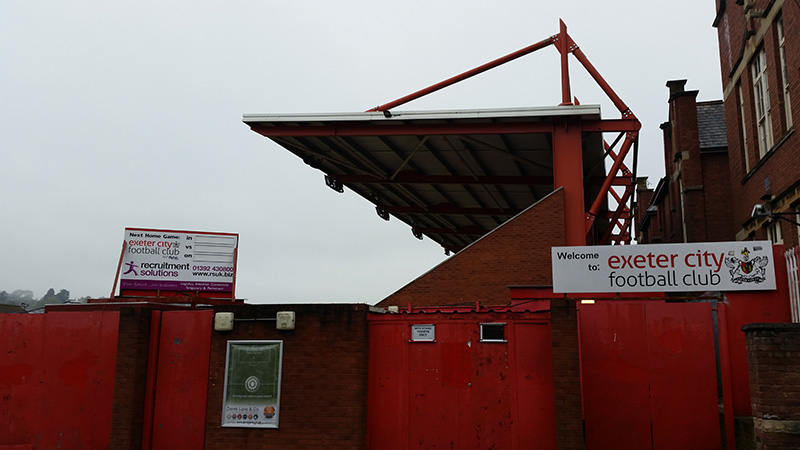 Behind one goal is the “Big Bank” terrace. This opened in 2000 and has a capacity of just under 4000. The size is certainly impressive and it’s the largest remaining terrace in English league football. Opposite at the other end is a very small and uncovered terrace which is for the away supporters, named the St James terrace. This looks similar to non-league terraces in that it is small and basic and the houses behind would be able to watch the game from the upstairs.

To one side is the old Grandstand that was originally opened in 1926. It is all seated, covered and has windshields to either side. It is situated towards the St James’ Terrace End although it does cross the halfway line. The team dugouts are at the front of this stand. Unusually at the other side of stand it is open and a row of floodlight pylons stand here. Although not readily apparent from inside the ground, the Grandstand size is due to the very close proximity of the railway line which runs behind this side of the ground. The Grandstand also has an unusual set of small floodlights along the front of its roof.

Opposite is the WTS Stand which was opened in 2001. This smart looking all seater stand has ECFC visible in its coloured seats. It is single tiered and covered, with a few executive boxes which are located in the middle to the rear. 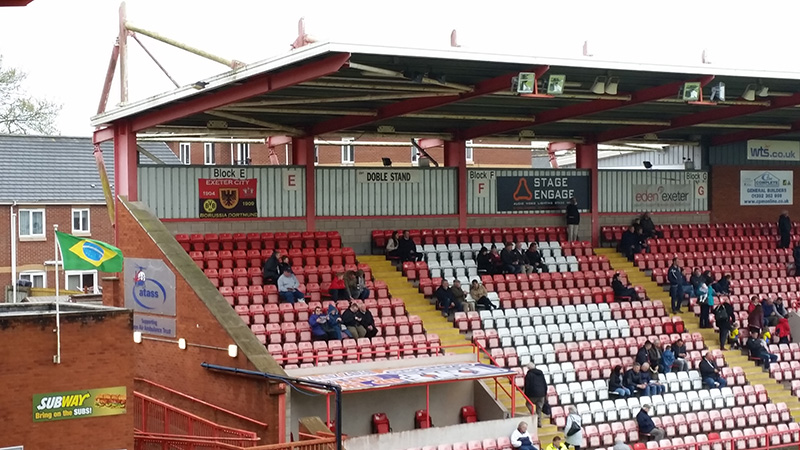 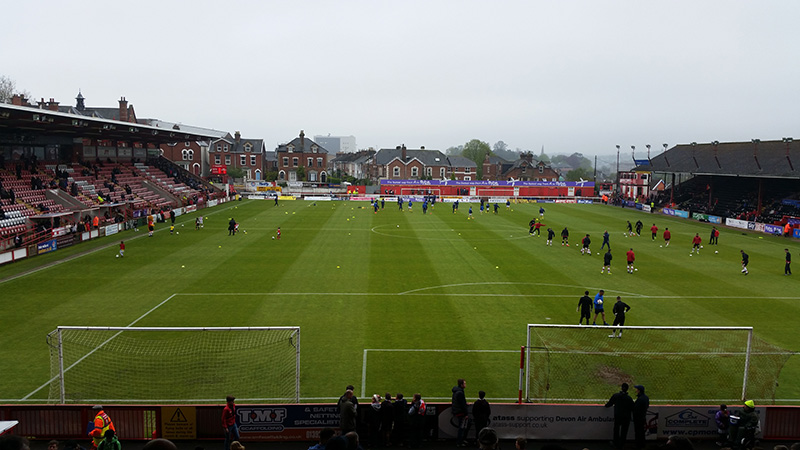 Thoughts on the game:
This result meant that Exeter ended the season in 10th place and Dagenham finished 14th place. With nothing at stake to either club before the start of the match then it was a real credit to both clubs’ professionalism that the match was played so competitively.

The first half didn’t have any goals but there were numerous chances in a half shaded by Dagenham. Exeter keeper Hamon got his angles right early on to deny Chambers. Slick passing from Dagenham then carved an opening through the home defence but Jones’ shot was blocked before Hamon could collect. Hamon also made a good one-on-one save after Cureton had played the ball through to Partridge.

For Exeter, Holmes and Harley fired in some long-range efforts which went just wide, and Morrison also put a half-volley just wide in the first half.

Dagenham’s Chambers had the ball in the back of the net towards the end of the first period – a high, looping effort found the top corner, but to his dismay the assistant referee had his flag up as the game remained goalless. 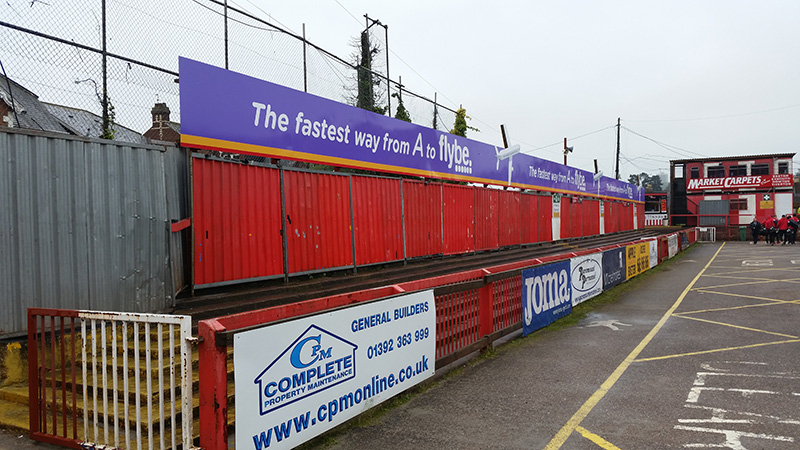 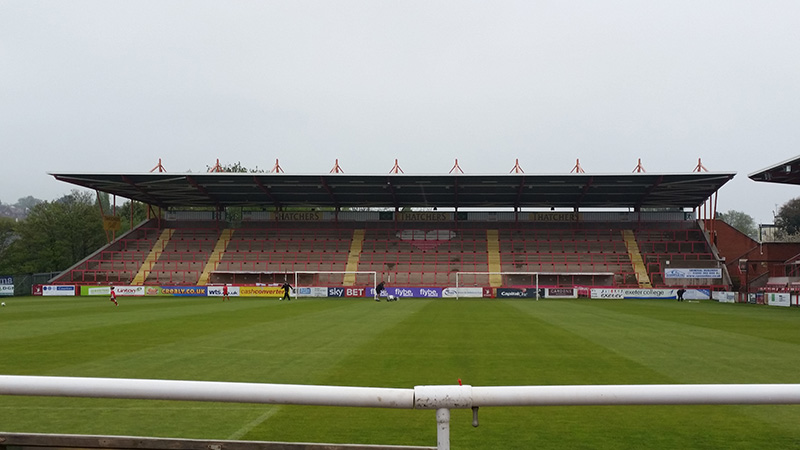 Dagenham also started the second half brightly but didn’t make the most of this pressure. It was Exeter that opened the scoring on the hour. Picking the ball up on the right, substitute Keohane showed terrific footwork to beat his marker and then curled a left-footed effort beyond Mark Cousins and into the top far corner. A quality goal in League two.

Shortly afterwards Nichols was given a total gift for the second Exeter goal. Just after Hamon had shown some great footwork to twice sell dummies to Cureton, goalkeeper Cousins tried something similar with teammate Gayle – but the defender played a blind pass to set up Nichols for a tap-in under the bar, with the goalkeeper nowhere to be seen. A disaster for Dagenham.

Morrison nearly added a third goal but his flick was taken off target by a recovering defender. Keohane then almost scored his second goal as he linked up well on the left of the box with Morrison but Dagenham keeper Cousins made a sprawling stop.

Dagenham had the final say as former City striker Cureton added his 20th goal of the season in injury time as he diverted in from Chambers’ low cross – and was also applauded from the home fans for a neat finish. This was the 39 year olds 278th career goal in league football, a significant achievement.

It was the last action of note as Exeter ended the campaign with a win. For a game that was played in pouring rain with nothing significant at stake to either side then it was a real credit to both football clubs to make it so competitive and entertaining. 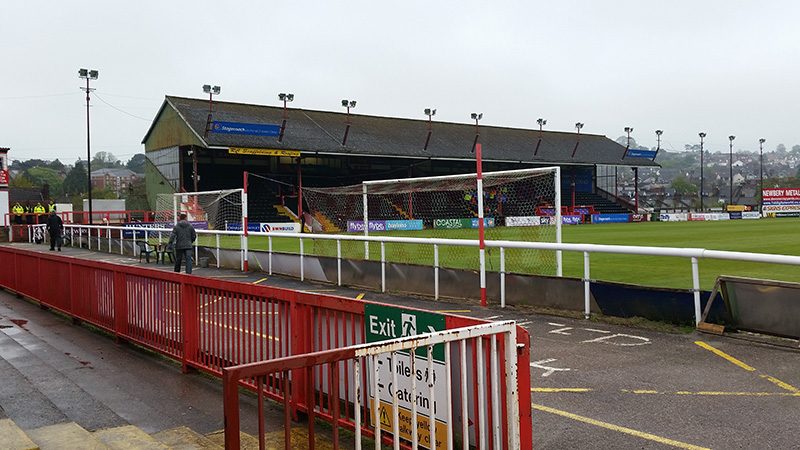 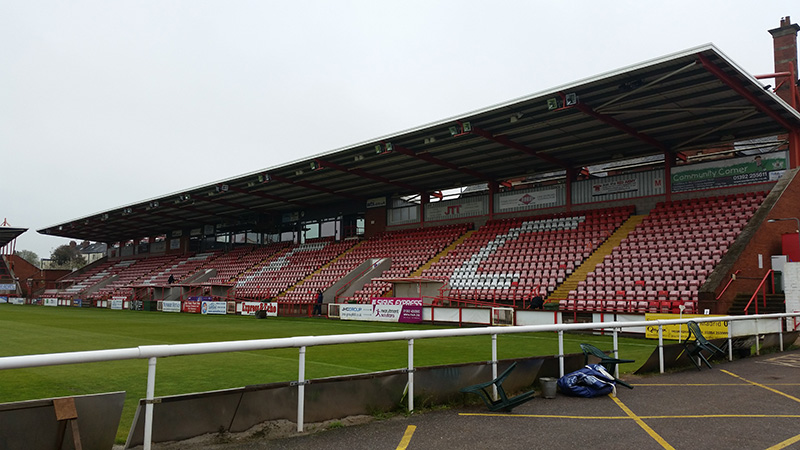 Atmosphere 2.5/5: Only real noise came from the home terrace, although the weather and end of season may have been factors in this.

Location 3.5/5: A 2 min walk to St James train station or park in the town centre and a 10 minute walk from there.

Value for money 3/5: £16 to stand on the largest terrace left in English league football and watch a game with 3 goals and plenty of attacking intent. A real nostalgic moment as a flag passed over the terrace.

Stewarding 2.5/5: Lots of them to stand around and one spent a long period of time checking through all the pockets of my rucksack akin to airport security without being friendly about it.

Overall 3/5: An enjoyable day out at an average game.