Newcastle fan Colin Harrison took another step towards the 92 club with a trip to the New Lawn, home of the first Vegan Football Club in the Football League.

On Monday evening I recieved a text message which contained three words. Those words were ‘Forest Green Saturday’. The text was from my referee mate David Webb, who is helping me achieve my goal of reaching ‘The 92 Club’.

As I had agreed to work on the Saturday in question, I had two people who I needed to persuade. The first was a colleague to cover my shift. The second, but more importantly, was my wife. Both of these obsticles were successfully navigated, which meant a trip away on the Friday night staying in Bromsgrove.

As ever on these trips, my trusty side-kick Paul (Geordie Boy on the92.net), came along. David picked us up at 7.30pm on the Friday, and we set off on the 4 hour drive south. Halfway, we stopped off for a coffee at a service station, where we had a pre-arranged meeting with another ref on his travels, Seb Stockbridge. Seb was on his way to referee the following days game at Luton Town.

Seb is a classic ‘friend of a friend’ as only two weeks ago on the opening day of the season, Paul and I were his guests at Shrewsbury Town. This was arranged by David who was refereeing at Oldham (been there, done that!).

We arrived at the hotel around 11.30pm and by 11.35pm we were in the bar. Sadly, David couldn’t join us so we forced down a few pints of overly-priced Stella Artios, and retired around the 2.30am mark. We knew we had a cooked breakfast to destroy at 9am.

The match-day breakfast was as expected, excellent. Paul managed three large sausages as well as the usual bacon, mushrooms, hash browns, black pudding, eggs, beans and toast. He is quite fond of a sausage is our Paul. I think he was concerned about the lack of meat on sale at The New Lawn.

We travelled to The New Lawn, arriving slightly earlier than planned. The route took us through the lovely Gloucestershire countryside, down many narrow roads with only a few passing places slowing us down. We remarked along the way of what the likes of Arsene Wenger and his Arsenal superstars would make of it if they were ever drawn to play here in the cup.

We headed for the players and officials entrance, which surprisingly is not near the main reception, but in the far corner of the stadium. The teams enter the field from this corner and walk across the pitch towards the dugouts in the main stand. A little peak into the home dressing room, revealed a bright vibrant green colour. A check of the strips of the opponents Yeovil Town, who were also playing in their green, showed not too much of a clash to cause any problems.

The main stand is a decent size, however the two terraced stands behind each goal are fairly typical for this level. The away fans are housed in the uncovered section running alongside the pitch. This is a change from last season as the away fans used to stand behind the goal to the right of the main stand.

We headed across to the main stand to wait in the Director’s Suite until the rest of the officials arrived. However, on the way, we needed to stop at the dugouts for our customary photo. We were given a choice of drinks, but as were were in the company of officials, it’s hot or soft drinks only. I asked for coffee with milk; soya milk was served. 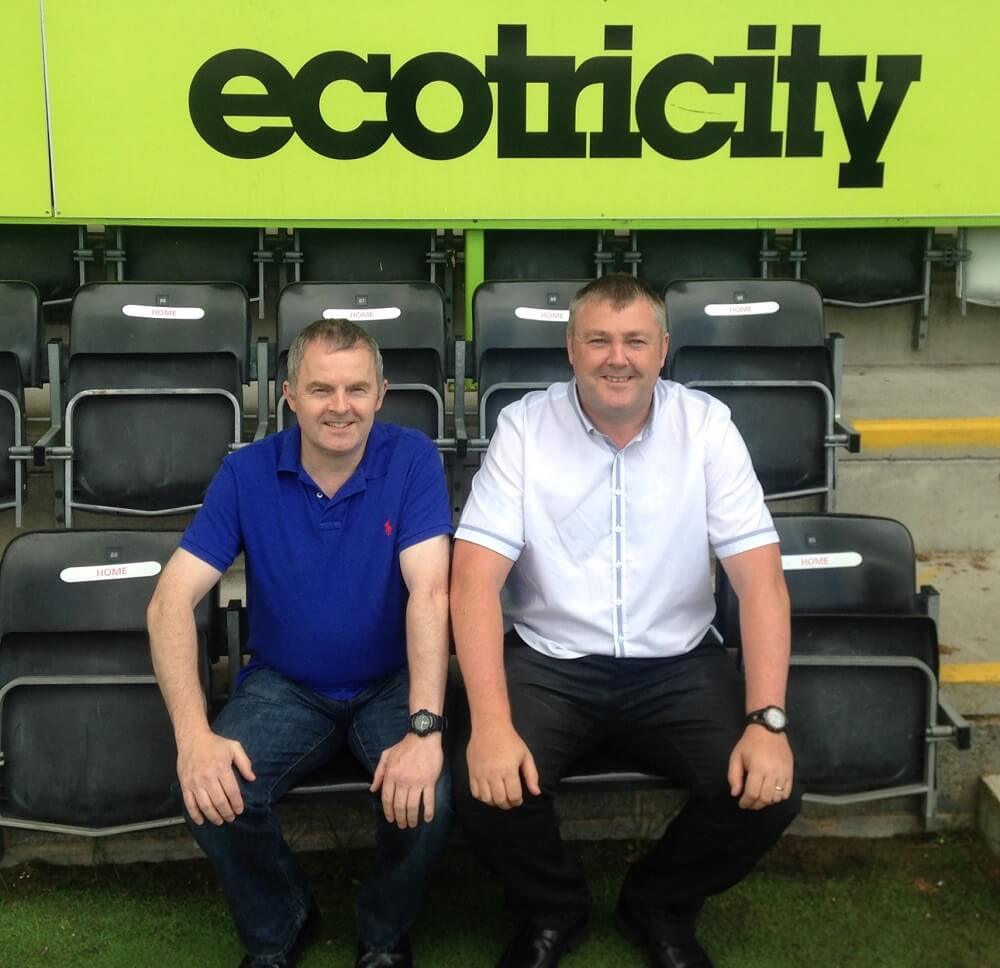 The food menu is littered with many offerings, all vegan. When the officials made their way to the changing rooms at 1.30pm, we headed for the bar. We went to the Carol Embrey Suite, which is located at the rear of the East Stand. I thought the food prices being charged for the fans was a little high. A vegan pie, pasty, burger or wrap with chips would set you back £7.00. 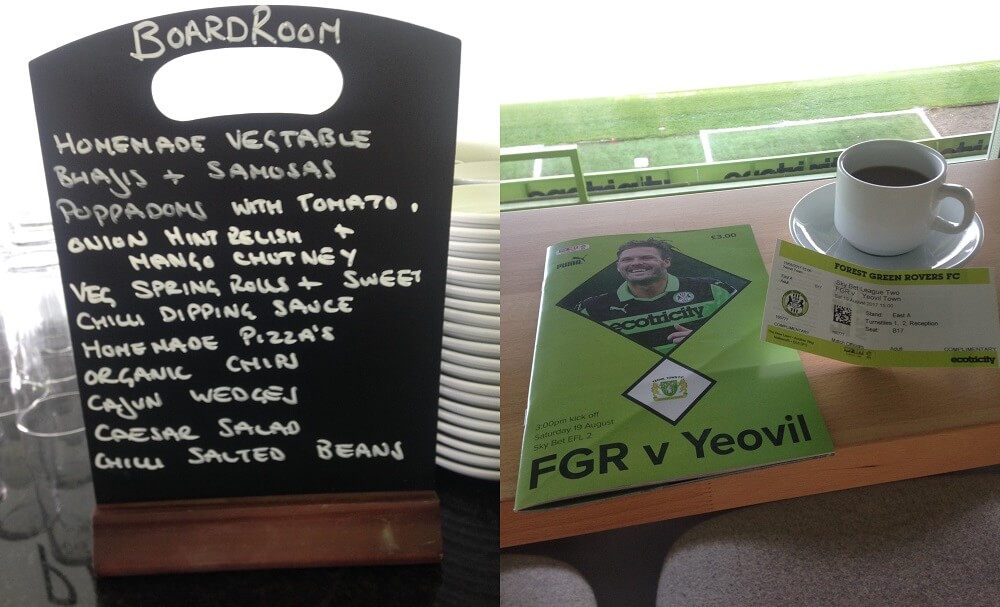 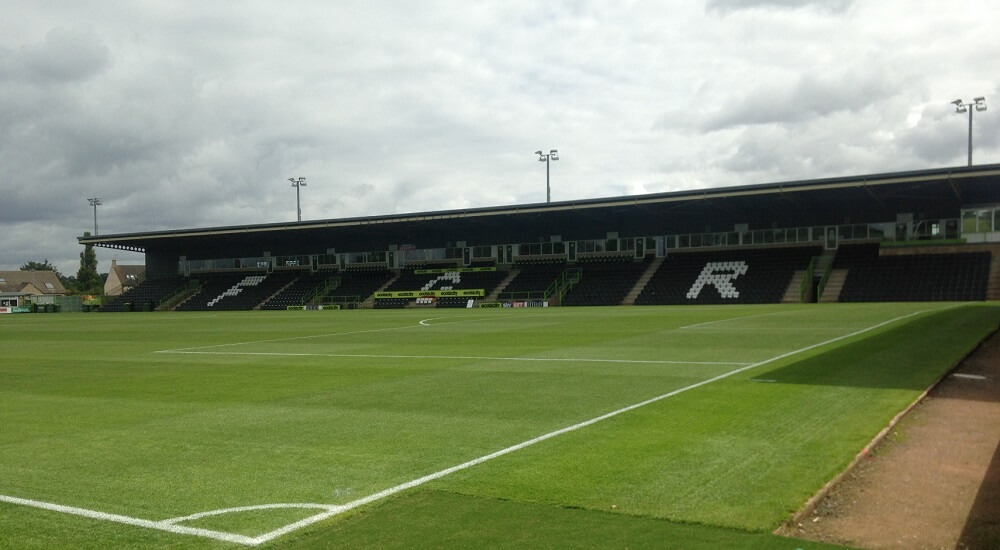 A number of brands of beers are not sold at The New Lawn, such as Guinness & John Smiths due to their brewing techniques involving animal extracts etc. However, a local Stroud Brewery had a number of ales on sale including the one we had, a hand-pulled real ale called Buddlings priced at £3.90. A couple of pints later, it was match time.

We sat in the second row, towards the right of the pitch level with the 18 yard box. I know it is early in the season but the pitch looked remarkable. Remember, there are no fertilizers used at all on the pitch, and it is watered using collected rain water.

The game itself saw Yeovil take an early lead, before our mate in the middle pointed to the spot to allow the away side to double it. It was probably the easiest penalty he has ever given, no arguments from any of the defenders. Forest Green pulled a goal back before Yeovil scored again. Just before half time, Rovers scored direct from a free kick. ‘3-1 and you messed it up’ (I think..) was the chant as the home side scored two more goals in the second half, to claim their first ever Football League victory.

Another pint after the game was taken while we waited for our mate to get showered and changed. Whilst there, the Man of the Match presentation took place. Most bigger clubs do this in their corporate areas away from genuine fans, but this was just another little thing which set them apart from other clubs.

We set off on the journey, and had only travelled roughly 10 miles before Paul had succumbed to the excitement of seeing seven goal, and nodded off in the back seat. Just as well the driver didn’t. After all, it was him who had ran around for 90 minutes!

The 270 mile homeward bound trip was interupted with the A1 being closed. This diversion added another 45 minutes to the timescale. We arrived back home at 11pm and I was happy in the knowledge I had reached number 78/92.

Where’s your next appointment, Mr Webb?