On the trail of Championship football, blogger pb1uk heads to Teesside. Middlesbrough was the destination as Boro went in search of a 7th consecutive win in all competitions. Their visitors, fellow Yorkshire side Leeds United.

Thoughts on the ground:
After travelling over 350 miles in 4 days I arrived in Middlesbrough ready to tick off my 3rd new ground in said period. With the sun beating down it felt like I’d arrived in Southern Europe for some early Autumn sun rather than alongside the River Tees. Crossing the bridge and seeing the Riverside for the first time in it’s setting was some sight. Like all new stadia, the ground is an impressive building, with, sat alongside side it, the striking structure of the ‘North Sea Producer’. Something of a local icon, the 236 metre long ship is a familiar sight at the ground having been in situ for works when the stadium opened, and after 18 years at sea, it was back. 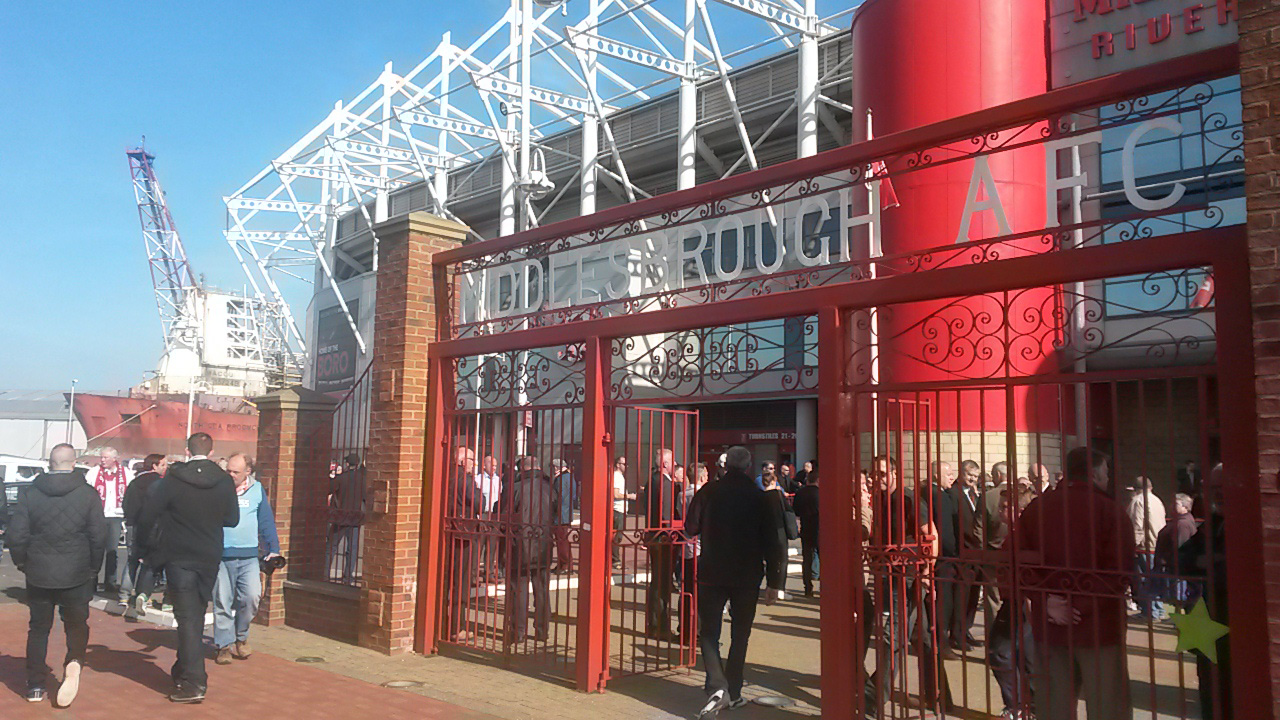 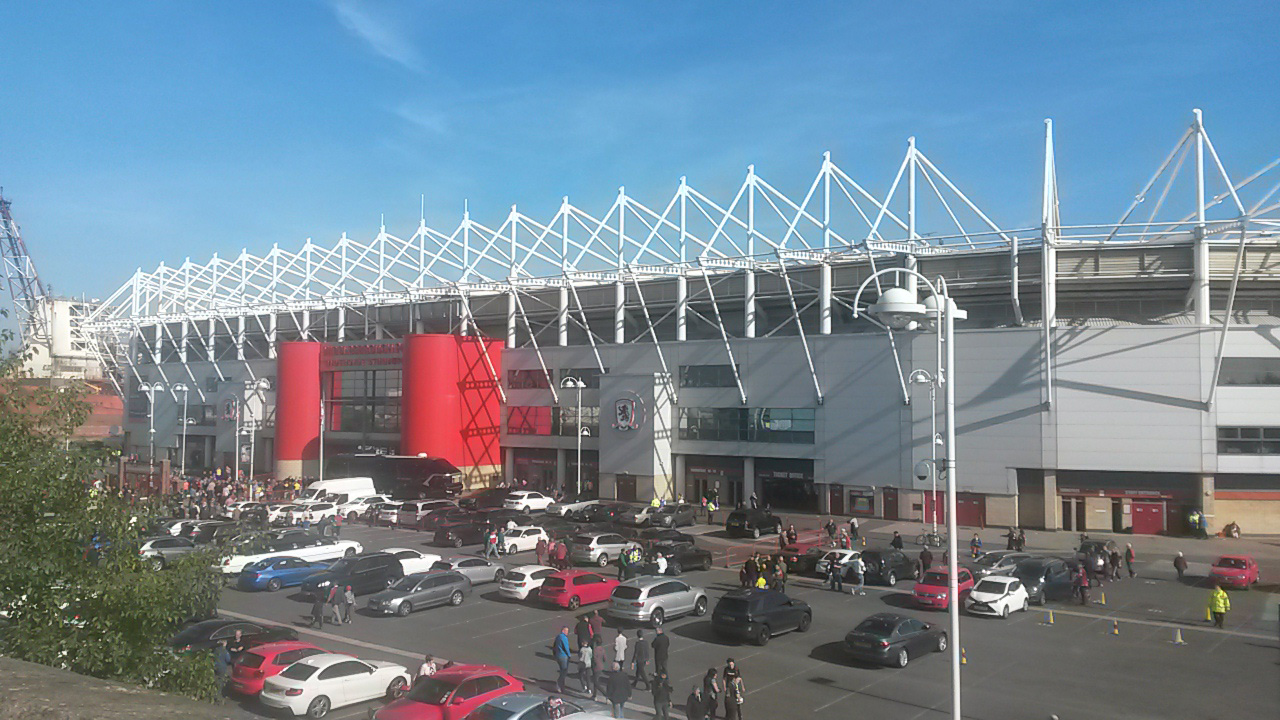 Now I must confess I have fallen into the habit of tarring all new build stadia with the same brush; lacking character and imagination. However I am starting to change my tune on this. It isn’t just about how the ground as a whole looks; it’s about what surrounds it, what adorns its walls and the supporters who, to quote Andy Townsend, are ‘in and around’ it. Celebrating 20 years at the ground Boro have certainly made the place their own. Along the stadium wall sections of grafitti gives the place some personality and there are a number of references to the clubs former home, Ayresome Park including seats (pictured). At the main entrance statues of club legends George Hardwick and Wilf Mannion sit either side of the fans’ Borobrick Road that leads to the old Ayresome Park gates. The gates, restored in 2005, are a prominent reminder of past hardships as they were famously locked when the club battled financial troubles. Now they are part of their heritage, which the club clearly seems to value. 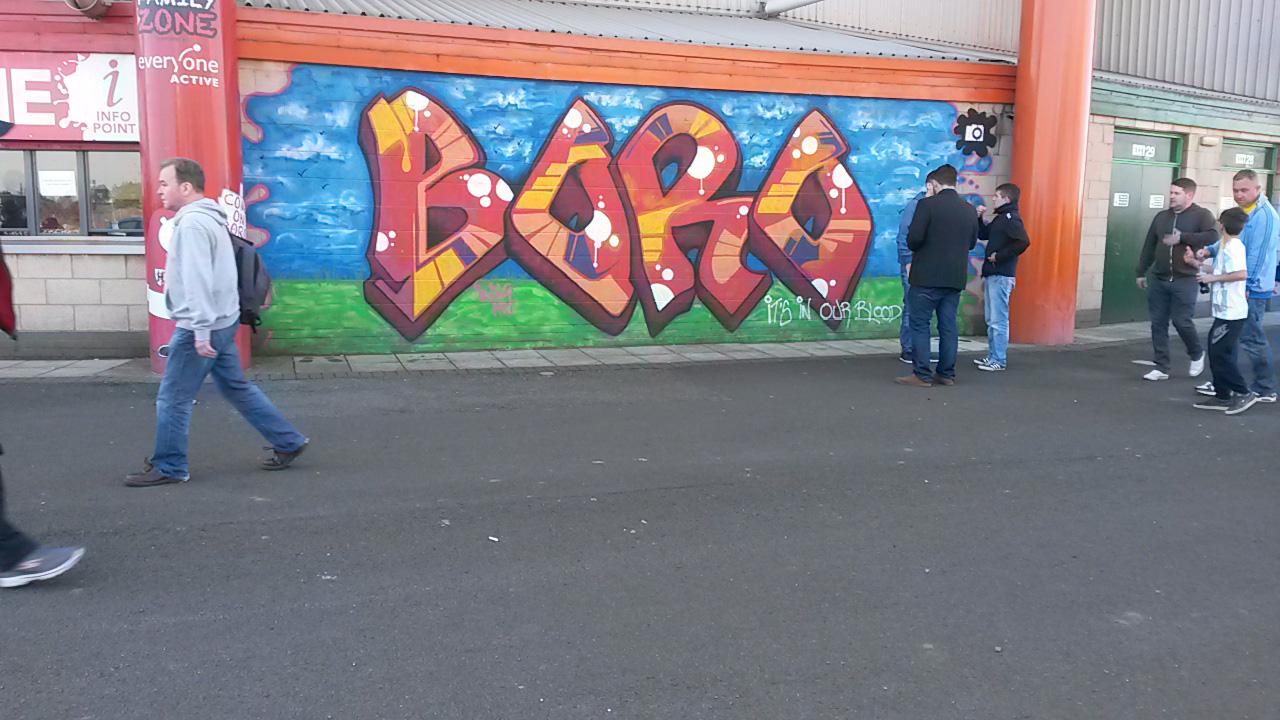 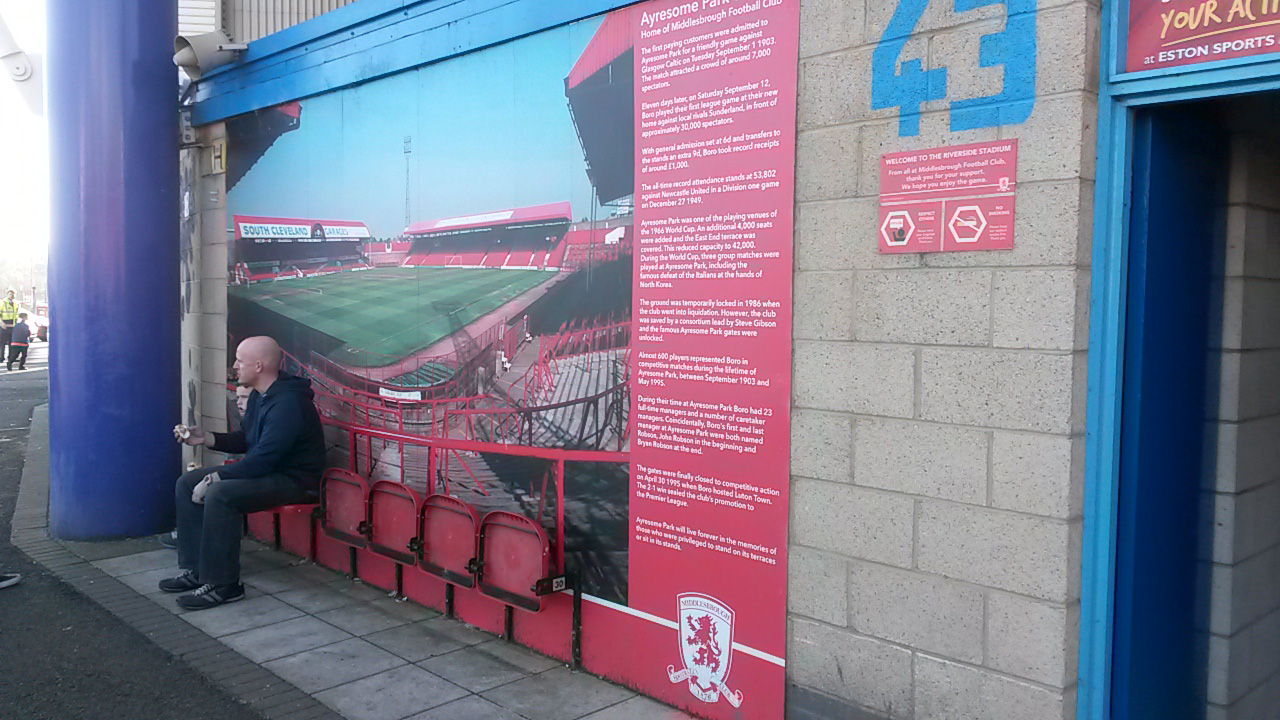 Thoughts on the game:
The homeside got off to the best possible start inside 3 minutes. Stuani turned Taylor inside out down the right and provided a cross, that was haplessly missed by Bellusci. Dave ‘The Difference’ Nugent was on hand and duly controlled the ball and smashed into the roof of the net from a few yards out sending the Boro fans into delirium. Nugent, a man not afraid of rubbing it in, proceeded to celebrate right in front the away fans, which as you can imagine went down well.

Leeds did have a fair amount of the ball but struggled to seriously test Konstantopoulos. Middlesbrough doubled their lead after half an hour in comical fashion. Already Silvestri had had to acrobatically save a header from his own centre half Sol Bamba, but he couldn’t do anything about one from fellow stopper Bellusci. George Friend got free down the left and his cross which would have been comfortably caught by Silvestri was turned in by the Italian, who was under no pressure, with a diving header.

The visitors sought to get back in the game as they continued to have possession in the second half. An Alex Mowatt freekick was well saved by Konstantopoulos before controversy struck. A speculative effort from a Leeds player from all of 25 yards took a couple of deflections before finding its way to Antenucci who coolly slotted home. As the Italian forward grabbed the ball and quickly made his way back to the middle, protests from the home players and crowd saw the referee make his way over the assistant. After a discussion the goal with disallowed much to the fury of United manager Uwe Rosler but to the delight of the Boro faithful who celebrated as if their side had scored a third. Initially I did think it was harsh, but being behind the goal the angle wasn’t favourable. Subsequent replays still are border line, from a neutral view, for me the benefit of the doubt has to go with the attacker.

It wasn’t long until the home fans were celebrating their 3rd goal and again Leeds contributed to their own downfall. As captain Sol Bamba went to play a cross field ball from centre defence he lost his footing, comically ended up on his backside. It was a gift for substitute Fabbrini who rounded the keeper and finished well from a tight angle to put the game to bed. 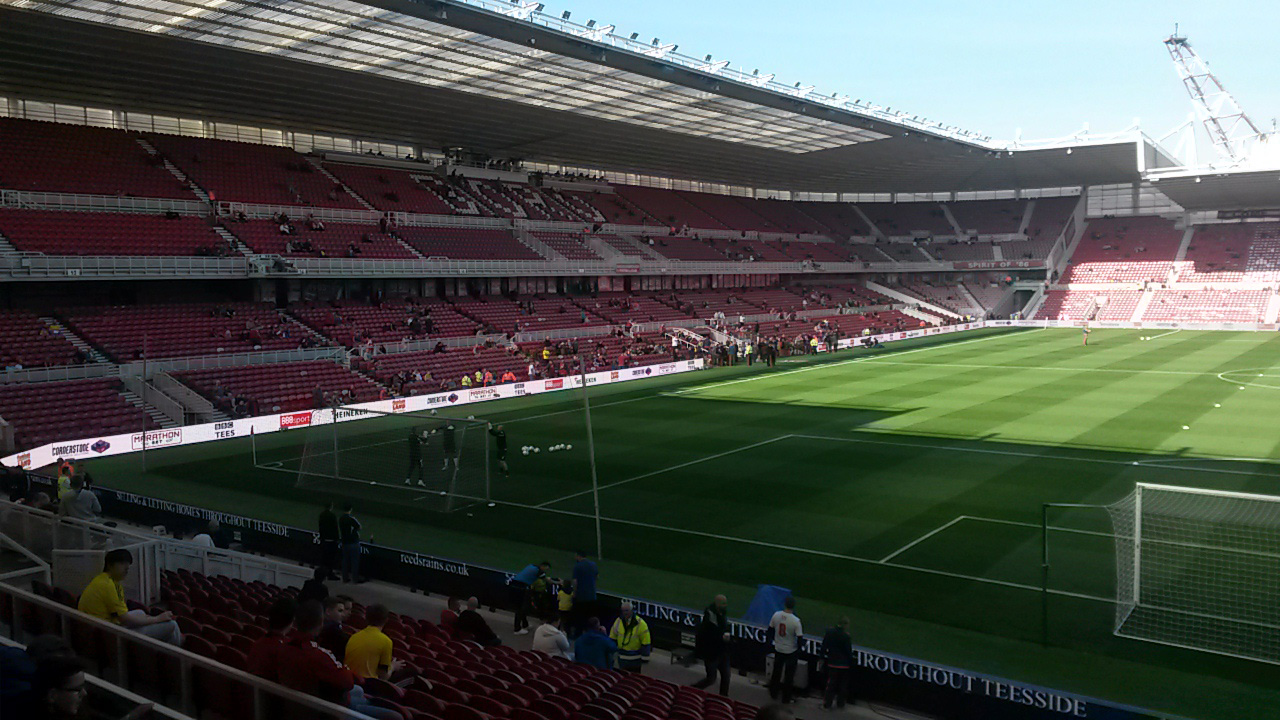 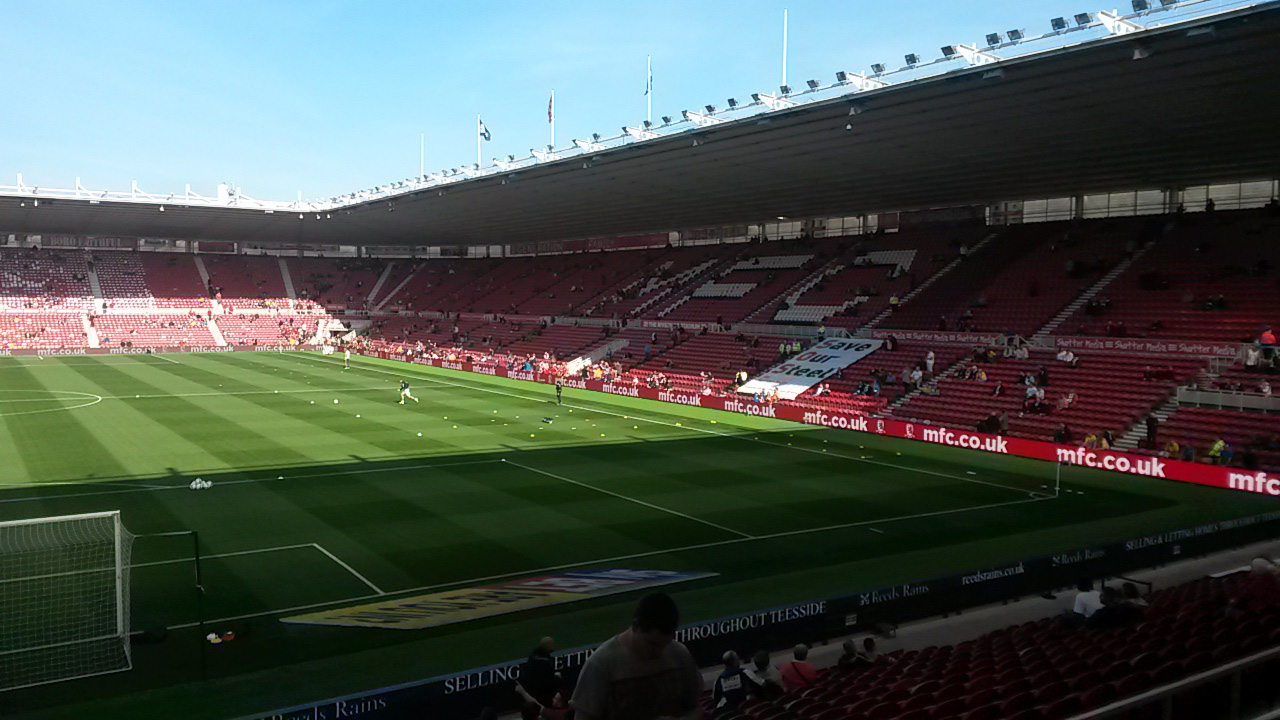 Leeds fans will have left the Riverside scratching their heads at how they had got nothing from the game. Despite having 60% of the possession and twice as many efforts on goal as Boro they failed to get on the scoresheet. When they did get in promising positions, the finish just wasn’t good enough, the one time it was, the officials came to the home side’s aid. Chris Wood was a big miss and with his form this season I think it would have been a different game with him on pitch. In truth they were the masters of their makers of their own destiny and Boro took full advantage. They were solid in defence and midfield and managed to get some probing balls in the box that caused the shaky Leeds centre back pairing big problems. You have to take your hat off to a side who manage to win 3-0 after having 2 shots on target! 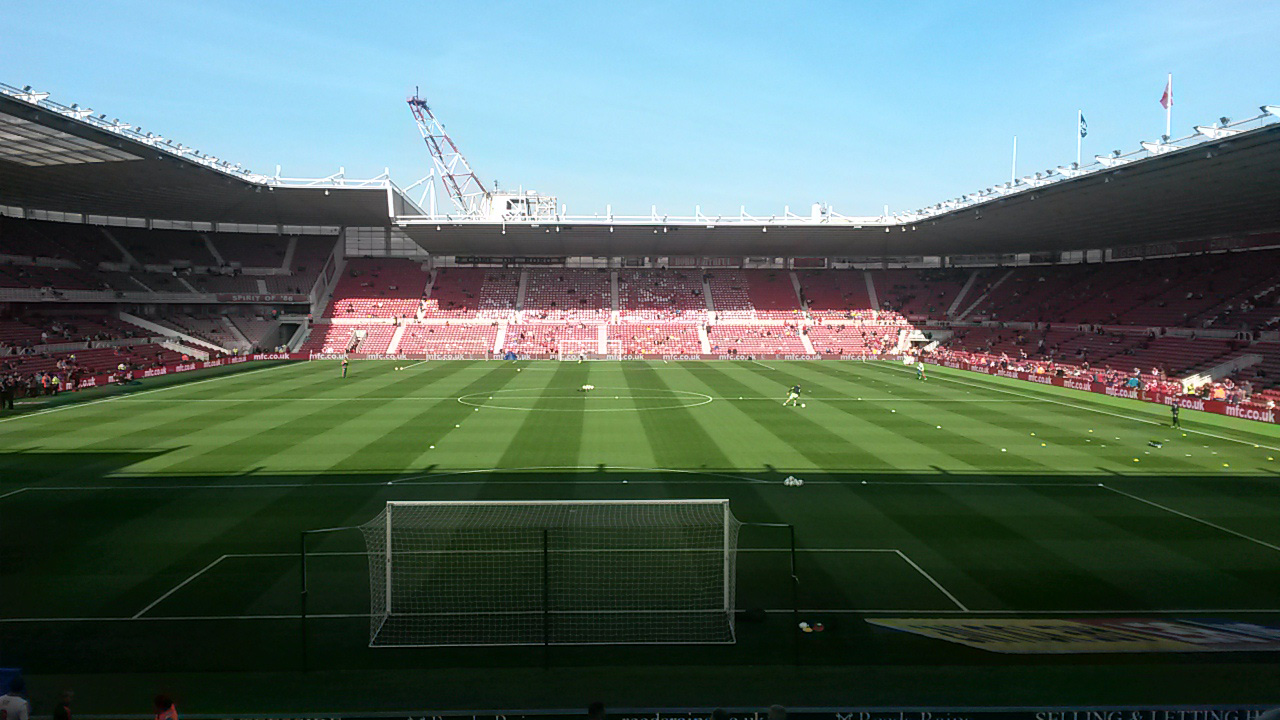 Atmosphere 4.5/5: The atmosphere was electric from in the concourse well before kick off to after the final whistle. To get the full Riverside experience I stood amongst the home fans in the South Stand and an experience it was! I wish every ground I went to featured Leeds away support as they always bring a decent following and enhance the atmosphere, as well as make the home fans up their game. Some cracking terrace banter from the Boro fans included chants “he’s one of your own, he’s one of your own, Jimmy Saville, he’s one of your own”, followed by ‘he might be your dad,…’ to the same tune.

Location 3.5/5: Easy to find and plenty of free parking in near by North Ormesby market place, a 15 minute walk from the ground.

Value for money 3.5/5: £27 isn’t bad for the Championship nowadays and the game was engrossing.

Programme 4.5/5: A really interested read and good quality publication. Also had some nice pieces to celebrate the 20th anniversary of the Riverside, an added plus for a groundhopper!

Character 3.5/5: Has more character than other new builds I’ve visited and really liked to references of Ayresome Park around the ground.

Stewarding 5/5: Allowed the fans to stand all game, a massive plus for me!

You can keep up with Peter’s 92 on his the92.net profile here. Have you been to the Riverside before? Add it to your 92 here www.the92.net/grounds or plan your trip using our away day planner here www.the92.net/plan-your-away-day/.