Swansea fan Matthew Harrison makes his debut in the92.net blog sharing his review of his trip to St James’s Park.

My only ever visit to St James Park, before this November visit, was a trip to Shearers’ Bar (the bar adjoining the famous Gallowgate End) during a night out in Newcastle after going to Sunderland away last season. I was very much looking forward to entering the stadium proper with many people raving about their trips to the Geordie’s cathedral of football. 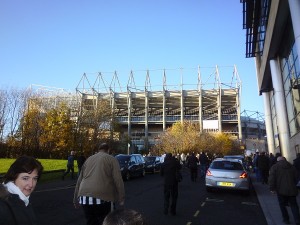 On entering the city of Newcastle, St James Park stands imperiously and proudly on top of a small hill in the city centre, with the stadium acting as a centrepiece to Tyneside just as football almost seems to itself. Despite a lop sided look, with one side of the stadium being much taller and bigger than the other, St James Park looks brilliant (and huge!) from the outside. Perhaps my favourite thing about my visit to St James Park was the fact that the stadium sits right in the heart of the city meaning you can enjoy a good drink in the city’s many pubs and bars (I can recommend the Old George, our pub of choice on the day) with the very friendly Geordie public, before stumbling into the stadium next door. However, on this day I would be in the away end watching my beloved Swansea City and getting to your seat in the away end is a challenge in itself: 14 flights of stairs! After a Herculean effort to reach the upper tier of the Sir John Hall Stand, where the away fans are housed at St James Park, you do find yourself very much in the North East heavens. Many fans have complained about how far away from the action the away fans are seated, but I quite actually quite enjoyed the novelty of watching a game of football while also having the skyline of a big city below, as the stand looks over the Toon. 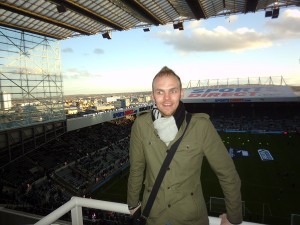 The game was excellent for Swansea fans, as the team delivered a superb counterattacking performance to defeat Newcastle 2-1 with goals from Michu and Jonathan de Guzman for the Swans, before Demba scored a 93rd minute consolation goal for Newcastle. Man of the Match was definitely Pablo Hernandez for the Swans, who showed moments of cool-headed brilliance throughout.

Atmosphere – 3/5 In the opening exchanges Nathan Dyer went 1-on-1 with the keeper and almost scored – this seemed to kill the home end who became very nervous and anxious. There was very little noise from the home fans, but the Jack Army was in fine voice as always all the way up in the heavens of the Sir John Hall Stand. Disappointing home atmosphere considering Newcastle usually bring the loudest away fans to games I’ve been to where the Toon Army have been away from St James Park. 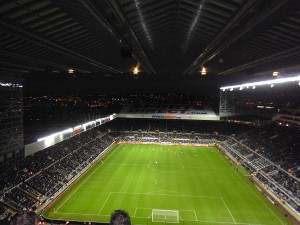 Location -5/5 Cannot fault the location at all. Right in the heat of a brilliant city with plenty of drinking holes to keep you refreshed before the big kick off. You can get to the stadium within ten minutes of anywhere in the city centre. For location, St James Park cannot be beaten.

Value for Money – 4/5 I’m used to paying £30+ for top flight football now, so I guess the ticket price being bang on £30 was good value for a Premier League game. The game was very good, and the day out was very enjoyable, so I can’t really complain at all.

Pint Selection – 1/5 Can’t recall too much of a selection, but the bottles of Carling were being sold for a wallet crippling £3.90!

Overall – 4.5/5 One of my favourite grounds, largely because of how nice the stadium is and the thriving city centre on its doorstep. If we were to include a ‘nightlife after the game’ category this would probably be a 5/5.

You can keep up to date with Matthew’s travels by following him on Twitter @mophead_88, his blog ‘Lost Boyos’ lostboyos.wordpress.com/ and football site ‘A Great Advert for the Game’ www.agreatadvertforthegame.com/