Blogger Peter Briers made the trip to the South West for a festive fixture as Exeter City welcomed AFC Wimbledon.

Of the remaining 38 grounds on my 92 Exeter’s St James’ Park was one the places I was most looking forward to ticking off. In an era were all seater stadia are the norm I was realising the chance to experience the largest terraced stand in the top 4 divisions of English football; the Big Bank. I wasn’t disappointed. The stand, which sits behind the goal has a capacity of just shy of 4000 and ‘was’ the atmosphere. For me every club should have a stand like this (in proportion to their ground).

Looking out from the Big Bank to the left sits the all seater WTS Stand (Cowshed), opposite which spanning just over half of the far touchline is the Old Grandstand. The latter as suggested in the name brings a real retro feel to the ground. The club have plans submitted to completely demolish and reconstruct this. The proposals also include relocating and improving player and referee facilities. Behind the goal at the other end is the St James Road Terrace for away fans that houses just over 1000.

Both clubs went into the game in poor form. The home side came in off the back of 2 defeats. Their last home game saw they beaten by a goal in the 10th minute of injury time, which was followed up by a comprehensive 3-0 defeat away at Oxford United on Boxing Day. AFC Wimbledon were without a win in 7 League games, with the run consisting of 5 draws and 2 defeats. 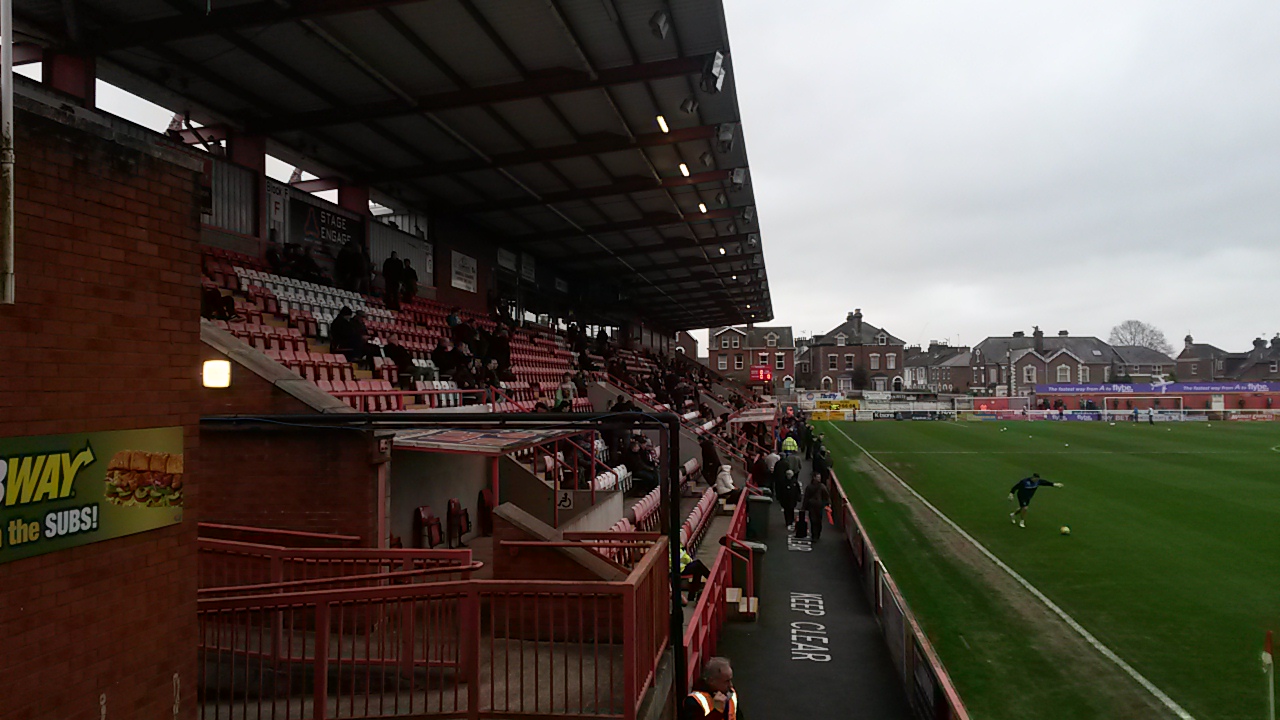 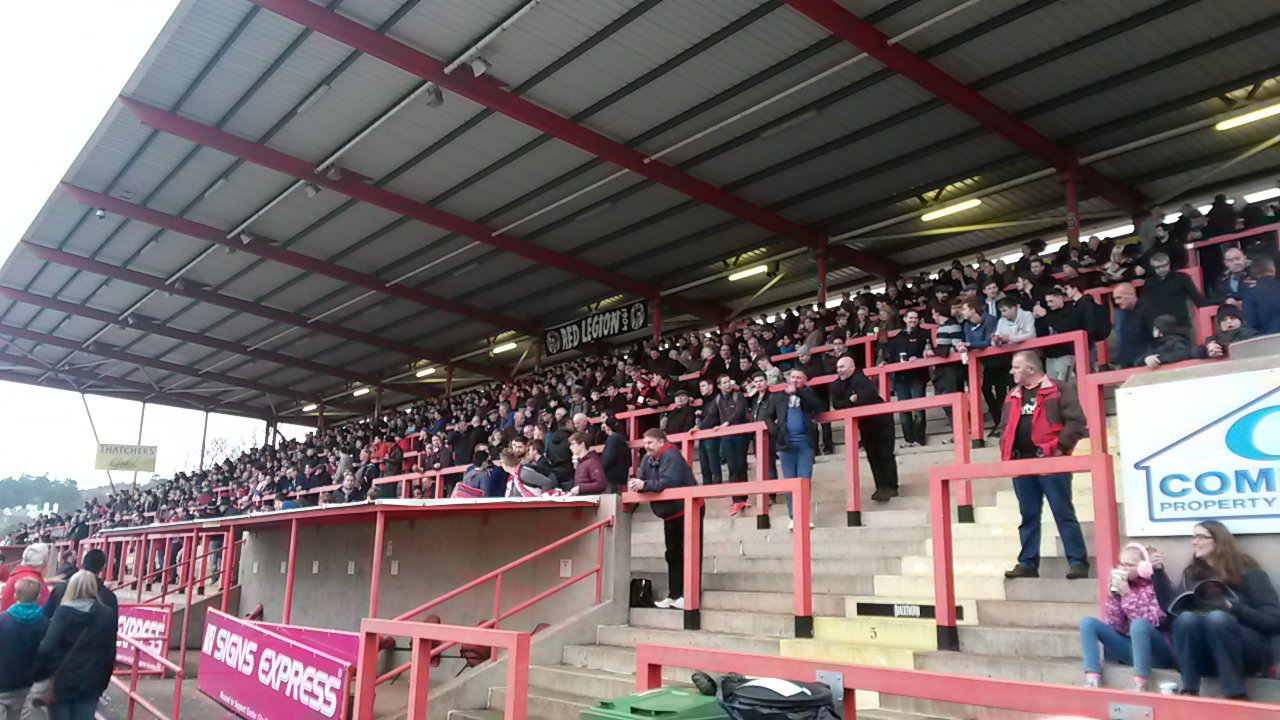 Exeter came out of the blocks quickly and looked to take an early advantage. Lee Holmes was at the heart of things, creating space down the left but despite a putting in a number of crosses nothing really came of them. Joel Grant had the best chance for the Grecians. In space attacking the left of the area he could have shot early, but instead tried a couple of step overs, which despite narrowing the angle, still required a decent save from Shea in the Dons goal. It’s always a worry when early pressure doesn’t break the deadlock and this was the case for Exeter after 17 minutes. A free kick from the right was worked out wide for George Francomb to deliver a fantastic cross into the box. On the end of it was 6ft 4 striker Tom Elliot who comfortably beat his marker in the air to power home a header from 8 yards.

The visitors doubled their lead just past the half hour in strange circumstances. A long kick from Dons keeper James Shea was missed by the heads of the Exeter defence and allowed to bounce. This confusion left striker Lyle Taylor in the clear, who coolly lobbed Bobby Olejnik in the City goal. The home sides best chance to get back in the game before the break came from Tom Nichols whose freekick from the edge of the area was well saved by Shea. 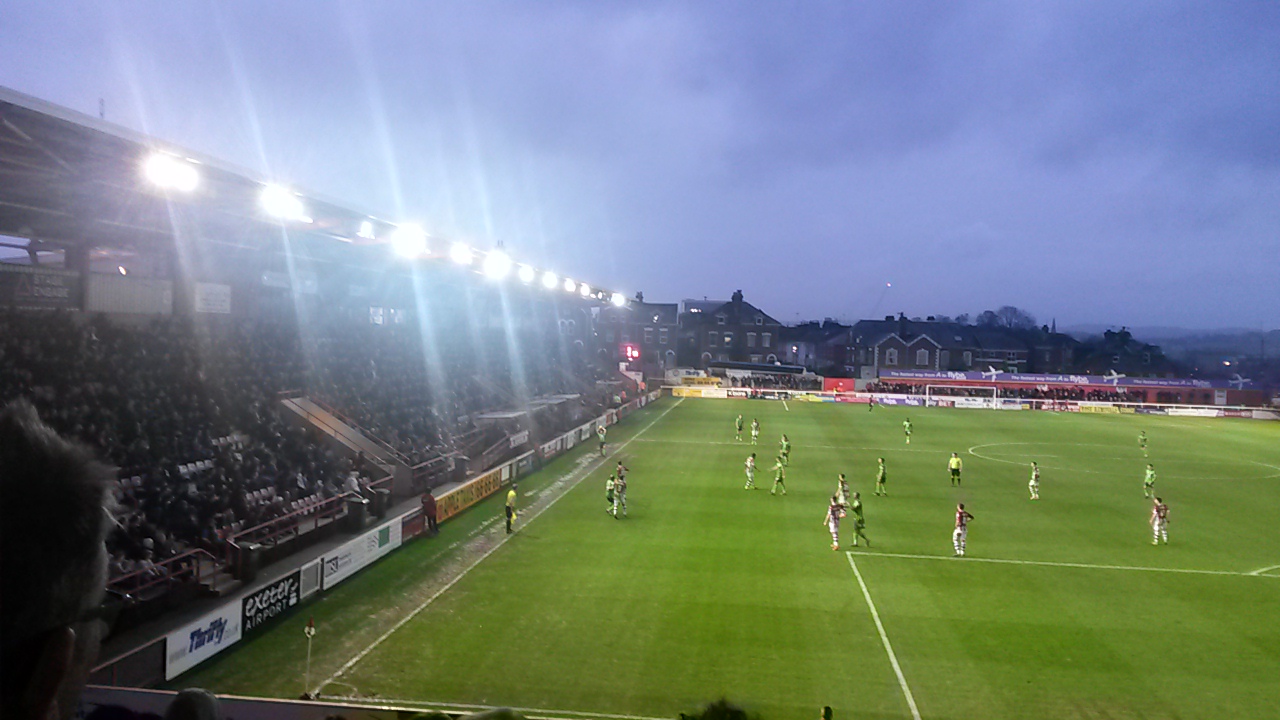 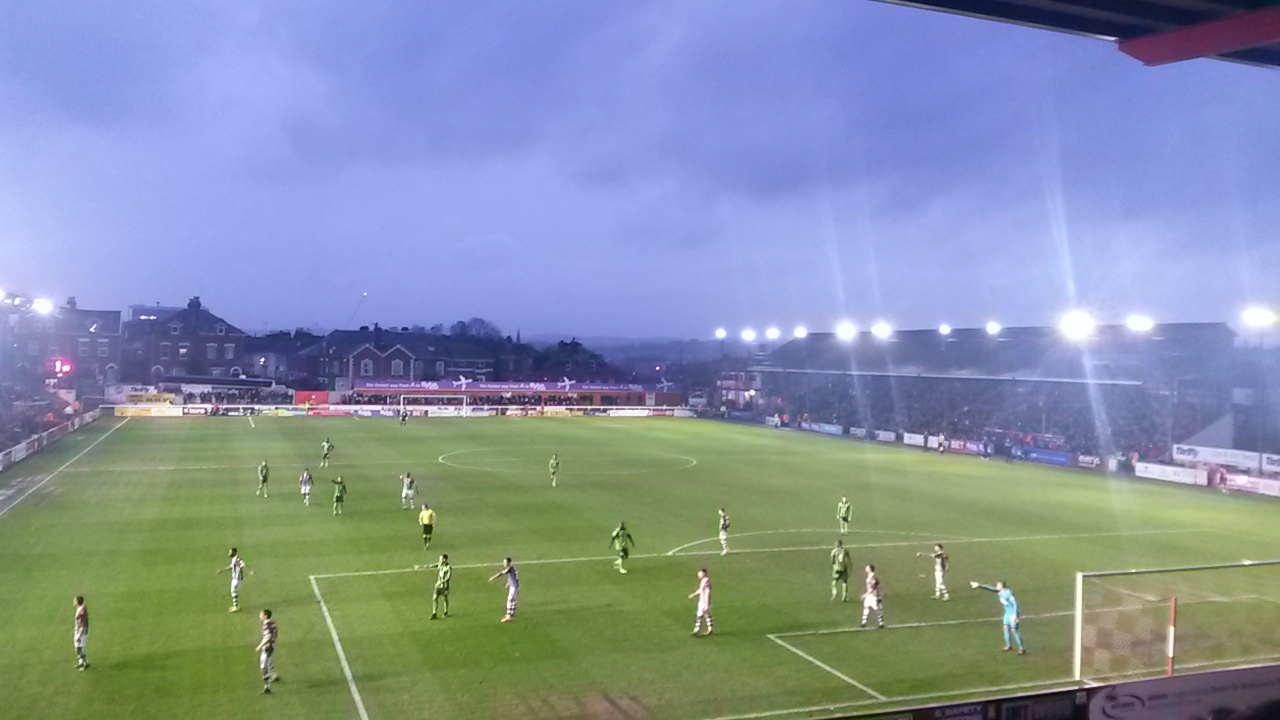 In the second half the game 2 days previous looked to be taking its toll as Exeter looked sluggish in attack. To their credit in the Wimbledon midfield Francomb, Bulman, Rigg and Reeves all worked tirelessly to close down the opposition and not give them any time on the ball. Late on the Grecians almost clawed a goal back, but veteran Clinton Morrison’s shot on the turn came back off the post. Indeed the Dons could have added more gloss to the scoreline on the break with Francomb and substitute Akinfenwa squandering good chances.

Atmosphere 3.5/5: Really enjoyed my experience of the Big Bank and would recommend it to any one.

Location 4/5 Right next to the train station and easy to find despite being inner city.

Character 4/5: Loved the mix of the old and the new.

Stewarding 4/5: Seen and not heard.

You can keep up with Peter’s 92 on his the92.net profile here. Have you been to St James’ Park before? Add it to your 92 here www.the92.net/grounds or plan your trip using our away day planner here www.the92.net/plan-your-away-day/. the92.net is a free service open to all football fans. Register now to create your 92 plus rate and review the grounds as you go!