Blogger pb1uk reports back from the Lincolnshire coast as newly promoted Grimsby Town continued to settle back into life in League 2 against Crewe.

After the National League Play-off Final in May I was delighted that Grimsby Town had finally made it back to the Football League. That’s nothing against Forest Green, but a trip to the coast and a ground with the character of Blundell Park is perfect fodder for any groundhopper. With a 100 mile trip from my base in the East Midlands I was determined to make a day of it. On my list in addition to exploring the ground was to sample the local delicacies and take in the seaside of course. But it’s not sea I hear you cry! Well the estuary-side, if that is such a word.

First on my list was to find the Mariners Promotion Ale. Spotted on Instagram while having a look at some #BlundellPark shots it had to be sampled. Promising a clean crisp, citrus flavour this pale ale was created and crafted to celebrate Grimsby’s return to the Football League. The limited edition tipple was brewed in Lincolnshire by the Axholme Brewing Co. in association with The Mariners Trust. For those who like a pint at the game it is available at Blundell Park. Being behind the wheel I headed to Message in a Bottle, a specialist bottled beer shop in the heart of Cleethorpes, to pick up a few bottles to take home. True to its billing it didn’t disappoint and was the perfect accompaniment to relaxing, feet up for the EFL highlights after a long day doing the 92 league grounds. If you’re into your local ales, world beers and craft cider be sure to pop in en route to the ground. In addition to the Mariners Promotion Ale there are 100s of varieties to choose from. 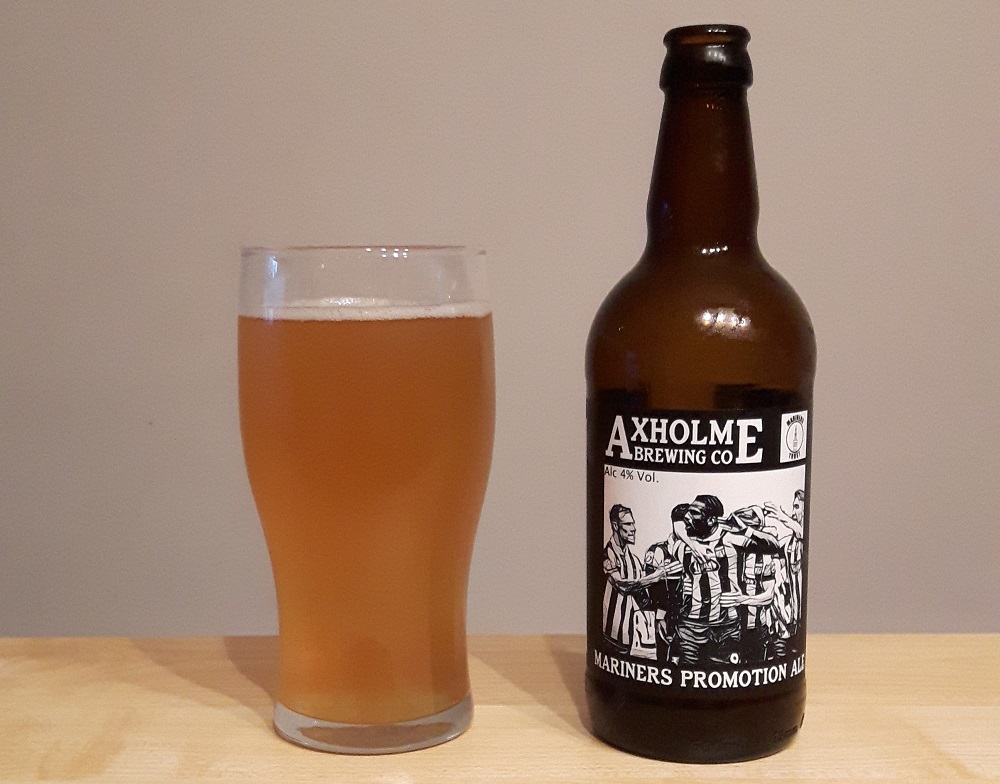 Grimsby, as their club crest and a number of their terrace chants refer to, is synonymous with fish. Lunch therefore was a no brainer, it had to be Fish and Chips. After putting it out to our Twitter following the overwhelming favourite recommended eatery was a place called Steels. However, being from the landlocked East Midlands I was hell-bent on lunch with the a estuary view which meant takeaway. From the various recommendations the chippy of choice was the Ocean Fish Bar, conveniently located just down the road from Message in a Bottle. Braving the wind, Cod and Chips underarm, it was a short walk to the promenade. The meal lived up to the endorsements, it was immense. I know everywhere has a chippy, but there’s nothing quite like going to one so close to the source. 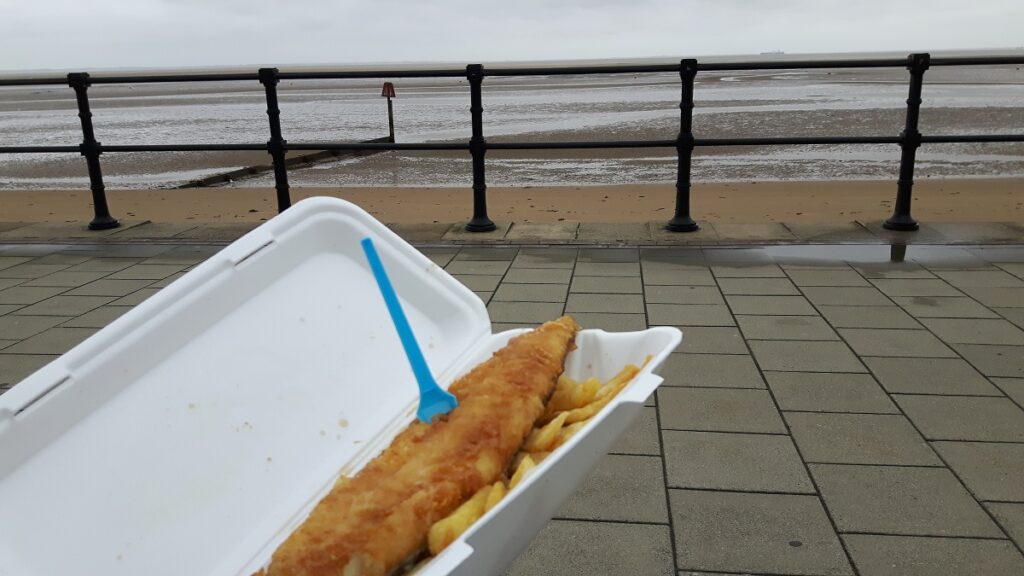 Fish and Chips from Ocean Fish Bar on Cleethorpes Seafront

Local delights ticked off it was down to the ground and my Blundell Park is right up there if like me character is your thing. On the North side of the ground that backs on to the Humber Estuary is the Main Stand which includes the changing room, dugouts and press area. Parts of the Main Stand date back to 1901 and it is often claimed to be the oldest stand in the Football League. This follows around the corner to join the Osmond Stand which houses the away supporters. At the opposite end of the ground is the Pontoon Stand where the more vocal Town fans go and finally there’s the Young’s Stand. The Young’s towers over the rest of the ground containing 2 tiers split by hospitality boxes. 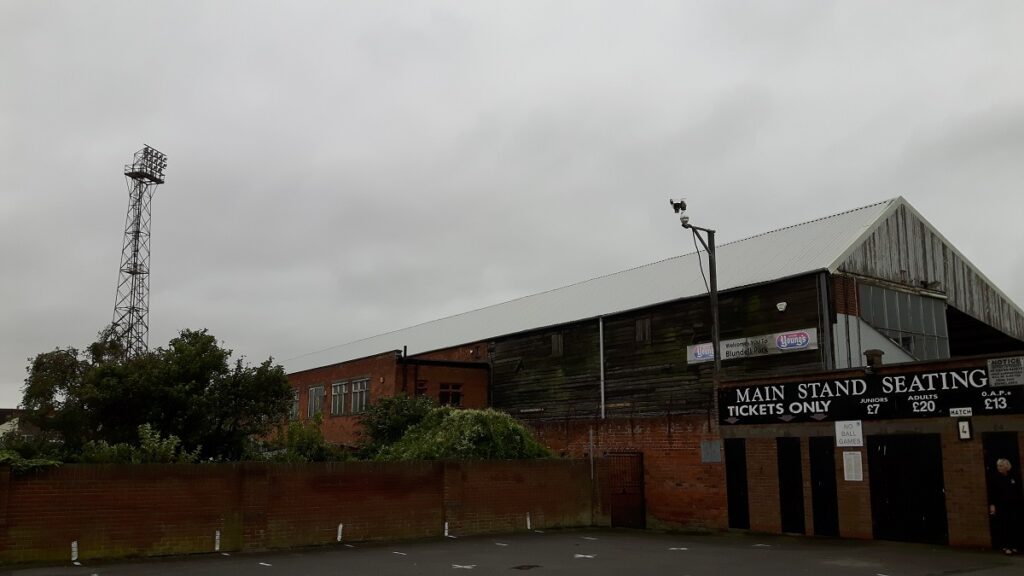 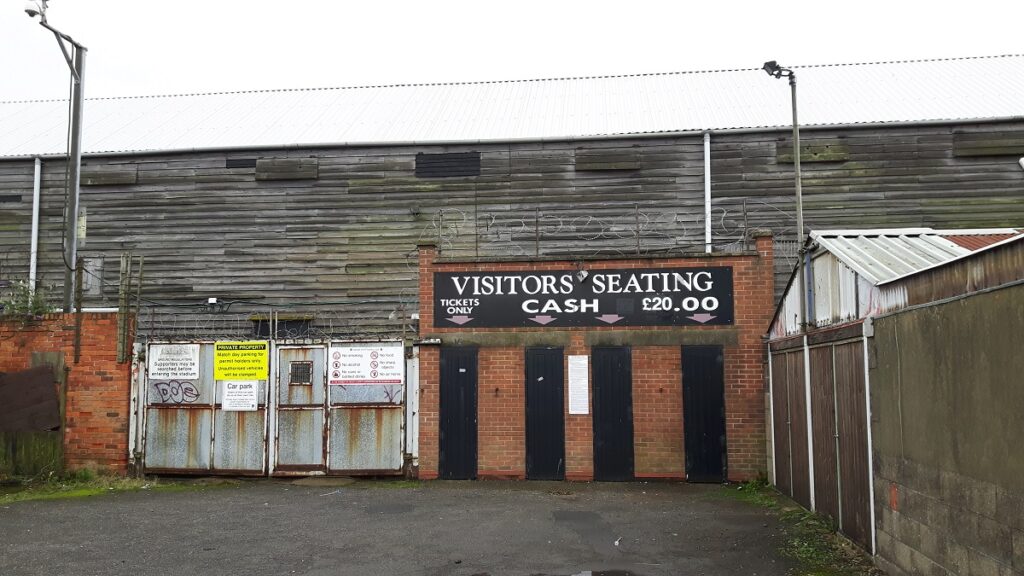 In each corner of the ground sit tall tradition style floodlights. Reading up on the ground I discovered the club bought these second hand from Wolverhampton Wanderers and they’ve been illuminating the place ever since they were installed in 1960. I’ve seen these pop up many a time on Twitter and Instagram on #FloodlightFriday and it was great to see them in the flesh. 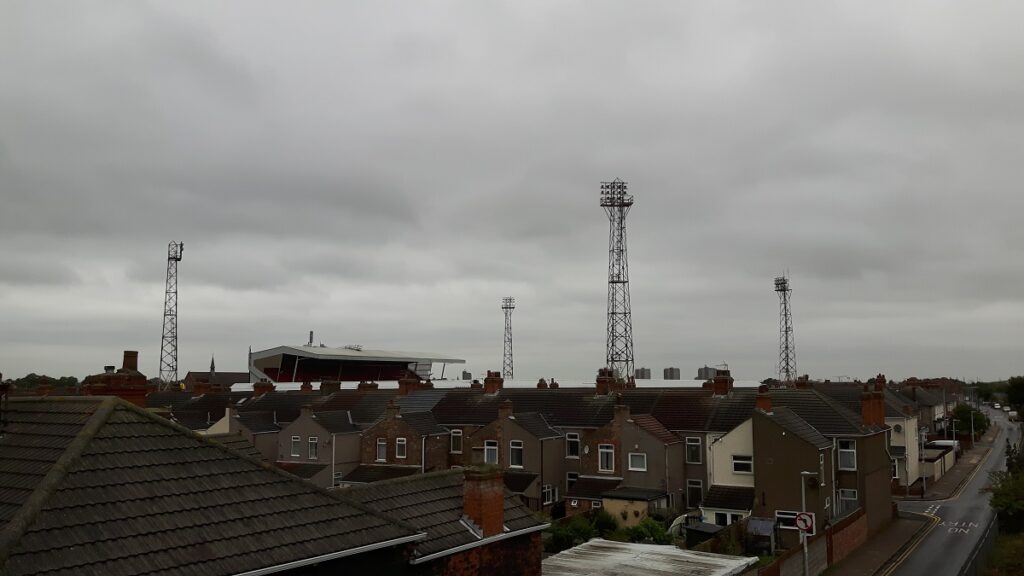 Normally when I visit grounds where to sit isn’t much of a decision, especially when it comes to new stadia. Today was different, it was a difficult choice between a) the Main Stand for history, b) the Pontoon for atmosphere or c) the Young’s Upper for the view out onto the Humber. I plumped for c) and in row S of the Young’s Upper the view of the pitch and beyond was fantastic. 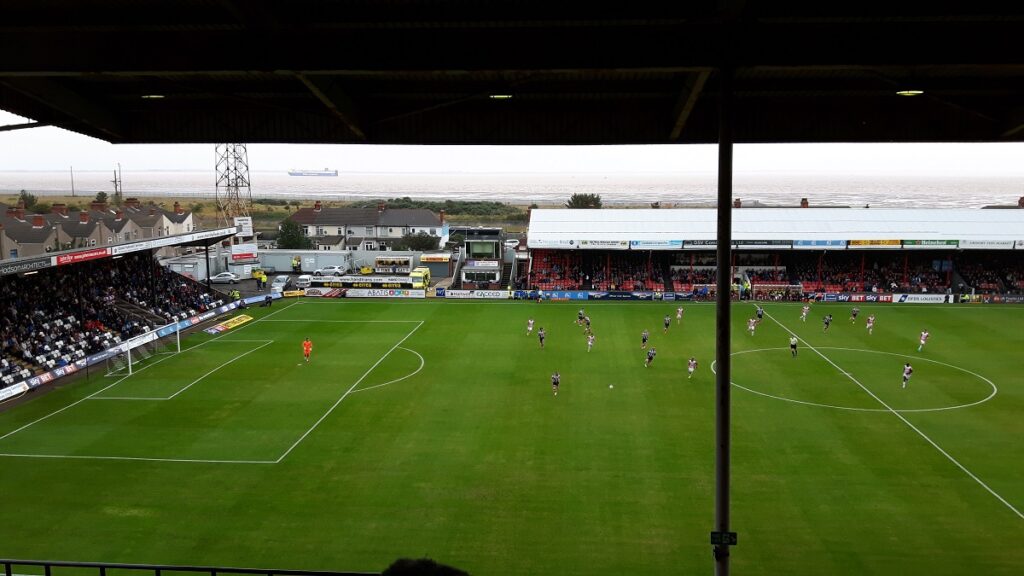 View from the Young’s Upper to the Humber Estuary

The game was a difficult one to call with both sides on the back of promising runs of form, albeit it small. Crewe had won their last 2 and Grimsby had picked up 7 points in their last 3 matches. This included a 5-2 demolition of Stevenage in their last home outing and an impressive 2-1 victory over Luton in their last outing. The Mariners started proceedings in confident mood looking to continue where they had left off at Kenilworth Road. They did have more of the ball but lacked an incisive touch and it was Crewe who had the first clear cut chance. James Jones crossed from the Crewe right which picked out Jon Guthrie, who managed to ghost in unmarked. But from just 8 yards out the defender put it straight at McKeown in the Town goal.

The Mariners defence didn’t heed the warning as another cross from the right caused problems. This time Cooper swung the ball in and as Dagnall went to meet it Mariners centre half Gowling inexplicably handled. No complaints from the home crowd or players, it was a stonewall pen. Dagnall stepped up, but despite having power the shot was fairly central and well saved by McKeown and after a scramble the ball was eventually cleared. Cue wild celebrations in the Pontoon. It was a real let off and now the wind was in the Mariners sails. 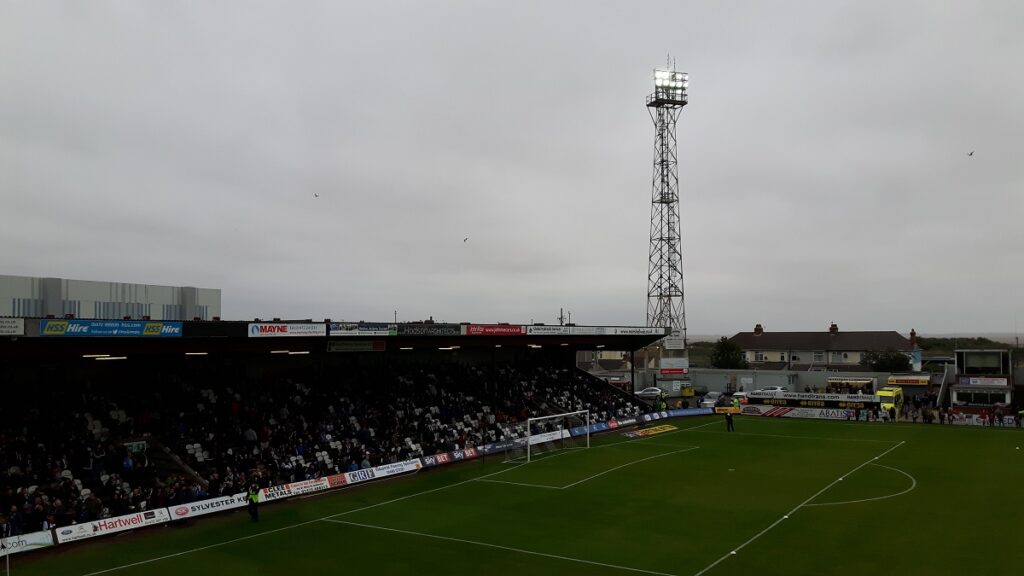 On 39 minutes they had the ball in the back of the net. For the first time in the afternoon Bogle found space for a shot from 20 or so yards out. Garrett in the Alex net couldn’t keep hold of it and Bogle’s striker partner Tuton tapped home, unfortunately for the home fans though the linesman flag was up. As the game was petering out before the break Crewe took the lead. Chris Dagnall pounced on a loose pass from Luke Summerfield and laid the ball off to the Lowe. The experienced captain, in his third spell at Crewe, played a beauty of a through ball to the on rushing Cooper who finished clinically past the keeper.

In all honesty it seemed like Grimsby never got going in the second half as frustration grew both in the stands and on the pitch. That was a real credit to Crewe who defended with discipline and were well drilled playing a high line. This enabled them to catch the Grimsby forwards offside a number of times and keep the division’s top scorer Bogle away from the penalty area. The front man’s frustration was clearly visible as the half worn on and eventually he fouled and talked his way into the referees’ notebook.

The visitors managed the game well and could have doubled their lead on the break and with a freekick, both through Lowe. 5 minutes from time though the game was put to bed. A corner wasn’t cleared as Lowe was able to collect and deliver the ball back in the box. A neat touch from Dagnall saw the ball fall to Jones and his shot squirmed through the keeper and over the line before Gowling could clear.

It was a deserved victory for the visitors in the end. You’ve got to admire Crewe, they are a club that stick to their principles and their youth academy continues to blossom, with both scorers today graduating from the Alex ranks. As I mentioned before it didn’t seem to click for the Mariners today. A couple of deadline day signings bedding in could have contributed to this but credit to Crewe who came with a game play and executed it to perfection. 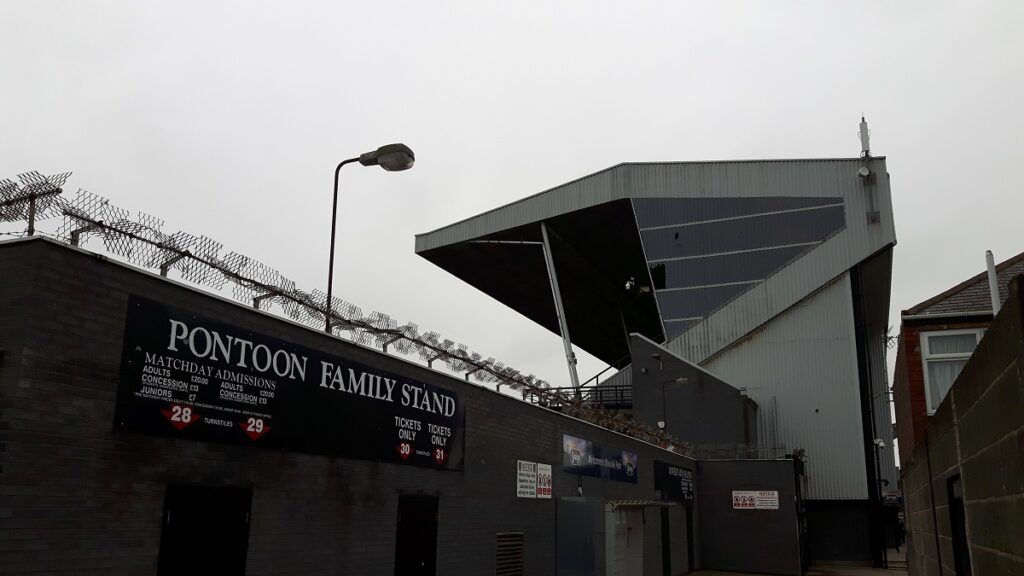 Atmosphere 3/5: There was some good noise in parts from the Pontoon, but there wasn’t much to get them on their feet aside from the penalty save. There were 173 from Crewe which meant there wasn’t any back and forth between the sets of fans.

Location 4.5/5: In amongst the houses, plenty of street parking and a seat with view that’s a bit different to the norm.

Stewarding 5/5: Let me in early doors to take a few snaps.

Character 5/5: Buckets of the stuff! A real mix of styles between the stands plus the tall traditional floodlights combine to make a ground full of charm.

Overall 4.5/5: For an overall experience as a fan who loves traditional grounds with character and a real identity Blundell Park is right up there among the favourites on my 92. I’d say definitely top 10, maybe pushing top 5. There could be cause to return with plans for a new ground a foot as part of a huge new housing and facilities development at Peaks Parkway. But the proposed site has been met with opposition from residents and counsellors so at the minute it remains to be seen if/when Grimsby Town will leave Blundell Park.

Have you made the trip to the home of Grimsby Town? If yes, you can tick Blundell Park off your 92 checklist or if not plan your trip there: