the92.net blogger Pete continued his quest doing the 92 league grounds heading to the West country. Plymouth was the destination as Argyle looked to continue their impressive run against a Colchester side struggling to find form.

With my parents living in Dorset and myself being based in the East Midlands I’ve been using trips back home to gradually work through the Southern grounds of my 92 with my old man. Clubs down South are spread far more thinly than up North so despite being considered ‘in that neck of the woods’ the trip down to Devon was still just over 2 and a half hours each way. 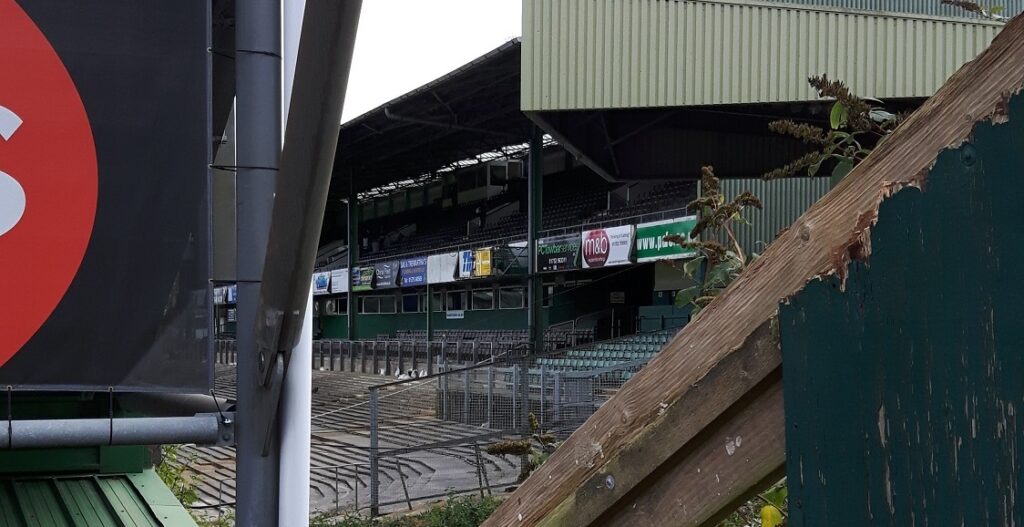 Looking in towards the Grandstand

After a smooth journey down we took the last left turn before ground into a residential area were we located some street parking a handy 10-minute walk through the park to the stadium. A quick stop at the ticket office and it was time to get some lunch. Coming all the way down to the South West I was keen to take advice from the locals to help find the best authentic local cuisine…the Pasty. Thanks to the recommendation from Argyle fan @_SamBarker_ who suggested local company Ivor Dewdney. The closest shop to Home Park was a 15 minute away and it was well worth it too (post code PL2 3BL if you’re interested!). For flavour it had to be traditional beef and with a variety of sizes too choose from we went for the ‘Giant’, a bargain at £3. Now I’ve had some pasties in my time but hands down this was the best, with a generous filling to pastry ratio and great taste. I’d thoroughly recommend making an effort to get there. 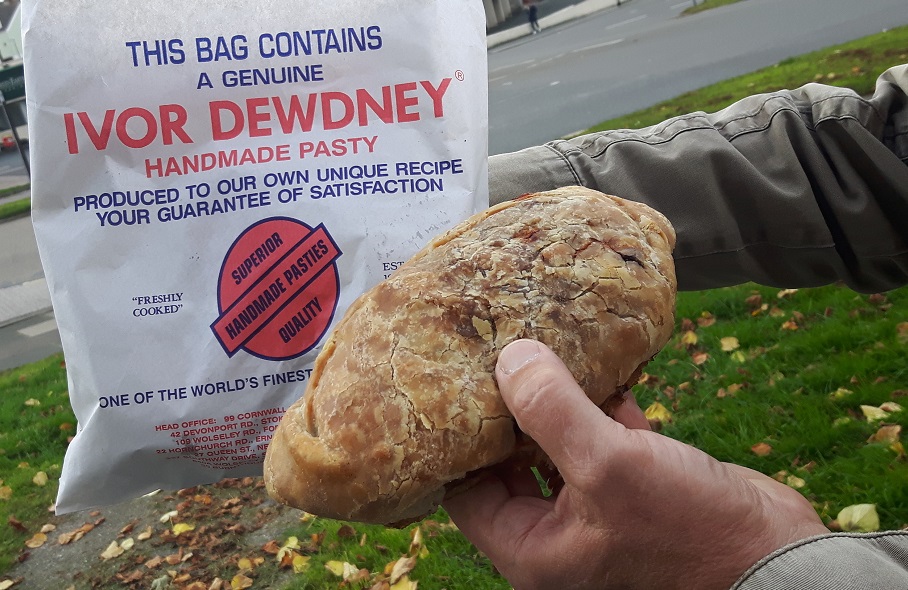 Home Park is made up of 3 modern stands (the Devonport End, Lyndhurst Stand, and Barn Park End) which were built as part of renovations which started in 2001. These were completed in the first phase of the redevelopment, with the second meant to complete the bowl by rebuilding the Grandstand, however this never materialised. The Grandstand is made up of 3 levels, the first of which is terracing which unfortunately is no longer in use. Above are executive boxes with a few rows of seats in front and finally an all wooden seater third tier. I hope when one day they redo that side they try to incorporate the design of the old in with the new. 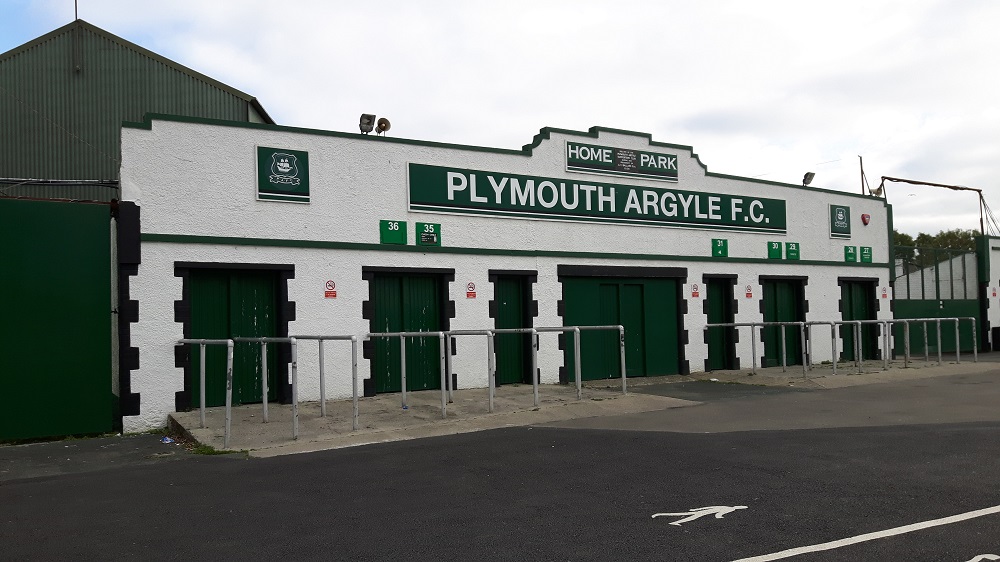 The iconic turnstiles for the Grandstand

Onto the game and on paper this was a home banker. Argyle were undefeated since the losing their first 2 league games of the season. An impressive run that now stretched to 14 games in all competitions. Their opponents Colchester were on a polar opposite run without a win in 8 matches in all competitions. For me it was a 3-0 home win, however that didn’t come to fruition.

Plymouth came out of the blocks quickest, keen to put the opposition defence under pressure and they got their rewards with an early lead. Graham Carey found Craig Tanner in space in the area and the midfielder on loan from Reading drilled a low shot past Sam Walker. The away side felt aggrieved as they had a player down injured after a firm but I’d argue a fair challenge in the midfield area. In those scenarios it’s down to the refs a call and Argyle were well within their rights to play on. 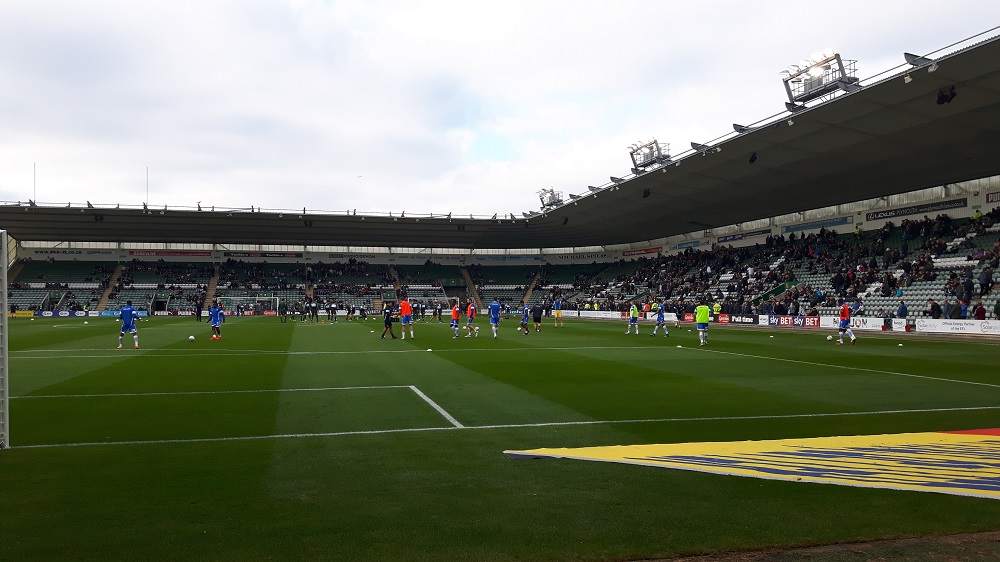 With the deadlock broken you would have expected this to be the que the for floodgates to open, however instead the U’s confidence grew as the half worn on and Plymouth’s play became untidy and disjointed. A warning shot was fired over the bows as good work down the right from Drey Wright saw the ball flash across the box. With 3 United players waiting to tap in the ball was too quick for striker Chris Porter who fluffed his lines. A minute later the visitors got the goal their endeavour deserved. Porter was fouled on the edge of area and the resulting free kick was expertly dispatched by Craig Slater giving home keeper Luke McCormick no chance.

As the second half wore on it looked like if any team were going to snatch the win it was the away side, until out of a blue a freak injury occurred to referee Kevin Johnson. The man in the middle was left flat out on the pitch after a collision with Argyle striker Jimmy Spencer. Initial cheers and laugher from the crowd were replaced with concern as the official stayed flat out and was eventually stretched off after a delay of 10 minutes+.

Play restarted with a throw in to the home side just inside their half and within seconds they took the lead. The throw was flicked on by Spencer but collected by Colchester centre half Luke Prosser who laid the ball back towards his keeper. With concentration lost from the stoppage there wasn’t enough on the ball back and as keeper Sam Walker cleared he was closed down by Argyle substitute Ryan Donaldson. The ball cannoned off the winger’s legs and bounced into the net. 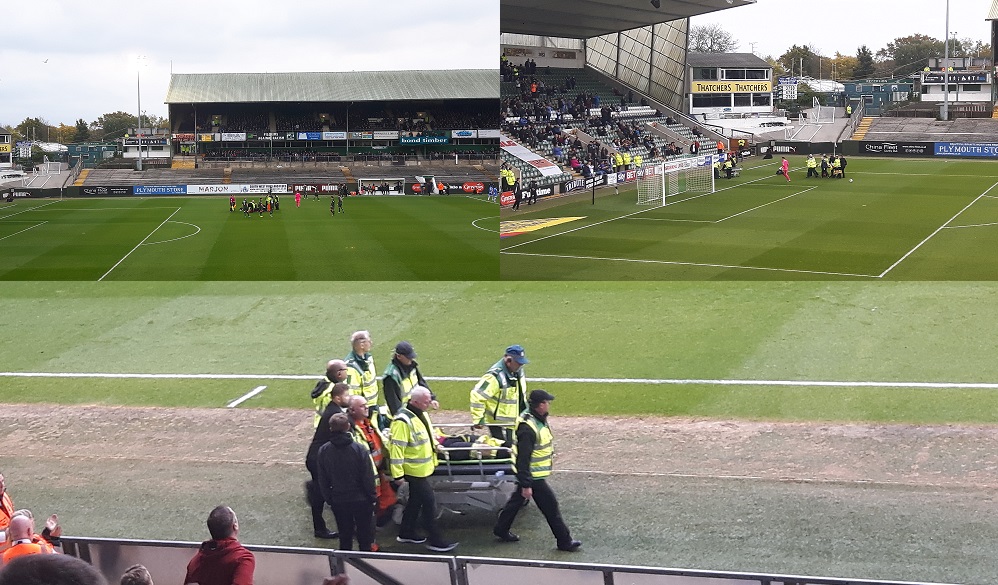 The injury to referee Kevin Johnson caused a delay of over 10 minutes. He was taken to hospital for checks as a precaution, but has been discharged and will be having a few weeks rest.

Despite the long the delay oddly the clock must have been stopped as the game continued to make up time without the board going up from the replacement fourth official. This caused confusion in the stands with no one quite knowing how long was left. Eventually 4 minutes went up, by which time the U’s had made a triple change in search of saving a point. As they threw everything forward their best chance fell to Bonne, but his shot was well held up McCormick.

Over the course of the 90 minutes I had expected more from Plymouth. Despite the early goal it never felt like they properly hit their stride. Saying that though it is the sign of good side who find a way to win whilst not hitting their best form. They were more switched on after play resumed and that was crucial. The visitors will have headed back to the Weston Homes Community Stadium thinking what might have been, if they eradicate the individual errors I think they’ll have an outside change of sneaking a play-off spot. 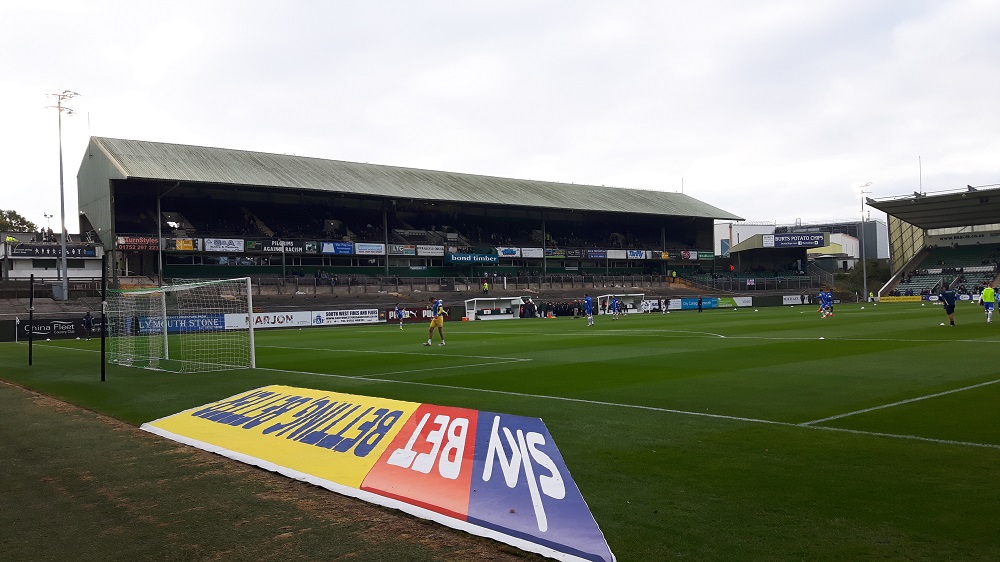 Atmosphere 3/5: The atmosphere was ok, although this is often dependant on the away following. There were just over 200 from Colchester and 30 or so who were near the drummer made some noise, but not enough to get a good back and forth going with the other end.

Location 4.5/5: Easy to get to and found a good spot of street parking the other side of Home Park (the Park not the stadium). After the match the getaway was decent too, we were back on the A38 in minutes.

Programme 4/5: I’m a big fan of history and nostalgic pieces in the programme. Argyle’s offering had a number of them, including one on the away team.

Stewarding 2/5: I had 2 interactions with stewards, both not great. These may seem like knit picking but…you I’ll let you decide. 1) We asked a steward on the turnstile whether they were showing the early kick off on the screens inside. He said no so we delayed going in, when we got in it was on. 2) As I was standing around taking a few snaps pre-match there was a jobsworth steward going round making everyone stand a foot back from the hoarding. Very unnecessary and pointless in my book! Looking at our stats Home Park currently sits last for stewarding in League 2 in our stats table, so maybe it wasn’t just me!

Character 4/5: If you’ve only seen Home Park on the Football League Show you may be baffled by this rating. What you don’t see on the box is the Grandstand and it surroundings which make up for the identikit stands that encompass the rest of the ground.

Overall 3.5/5: In comparison to a recent trip to Cheltenham Home Park is clearly a Championship standard ground in League 2.

Have you made the trip to the home of Plymouth Argyle? If yes, you can tick Home Park off your 92 checklist or if not plan your trip there: