With July drawing to a close, blogger Josh Green spread his wings to make the three hour journey to Shrewsbury Town for match number six of pre-season…

With many teams gearing up for their respective opening day fixtures, there was a smell of optimism in the air as The Shrews looked to continue their perfect pre-season record.

Shrewsbury Town celebrated their 10th anniversary at the New Meadow just a month or so ago, and will begin their 10th season at their ‘new’ home in just a couple of weeks. With four banked stands surrounding the pitch, it is a pleasant place to watch football, with excellent views from all four sides. 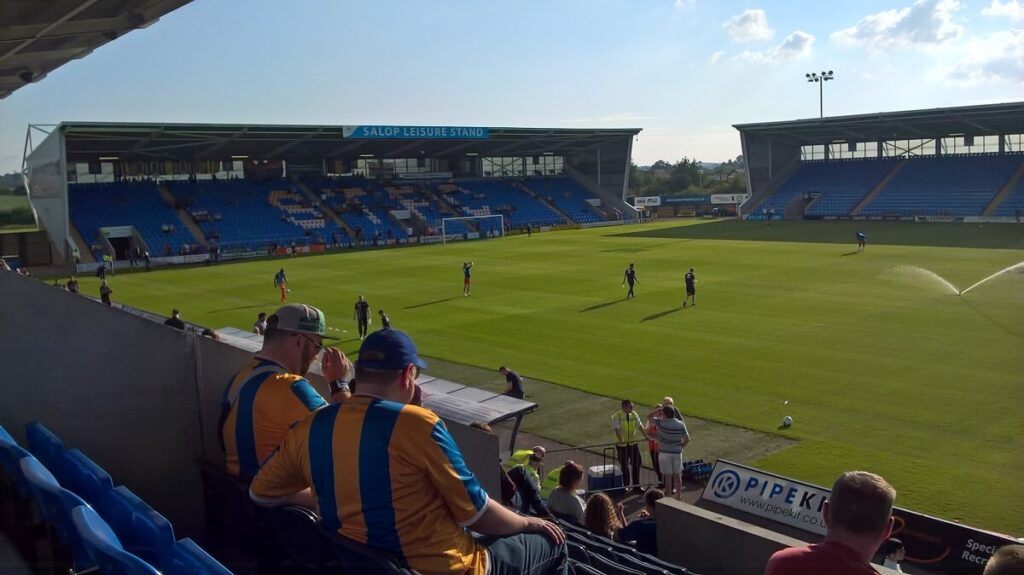 Travelling to the Shropshire club is quite a task. From the train station you will either need to catch a bus (check the club’s website for more details) or book a taxi for approximately £5.

Alternatively, you can brave the 2.5 mile walk through the town centre towards the ground. The New Meadow Stadium is well signposted once you have negotiated the town centre, so should you fancy a stretch of your legs, I’m sure you will have little issue.

As the norm with this time of year, there was buzz of anticipation around the ground. With the regular season just a couple of weeks away, many first team players were given a full 90 minutes. Therefore enhancing their sharpness for the crucial opening fixture.

If there’s one thing I take away from my day in Shropshire, it is the friendly nature of the fans. I regularly get chatting with a section of the home faithful wherever I visit, but no-one has made an impression like the Shrews supporters. 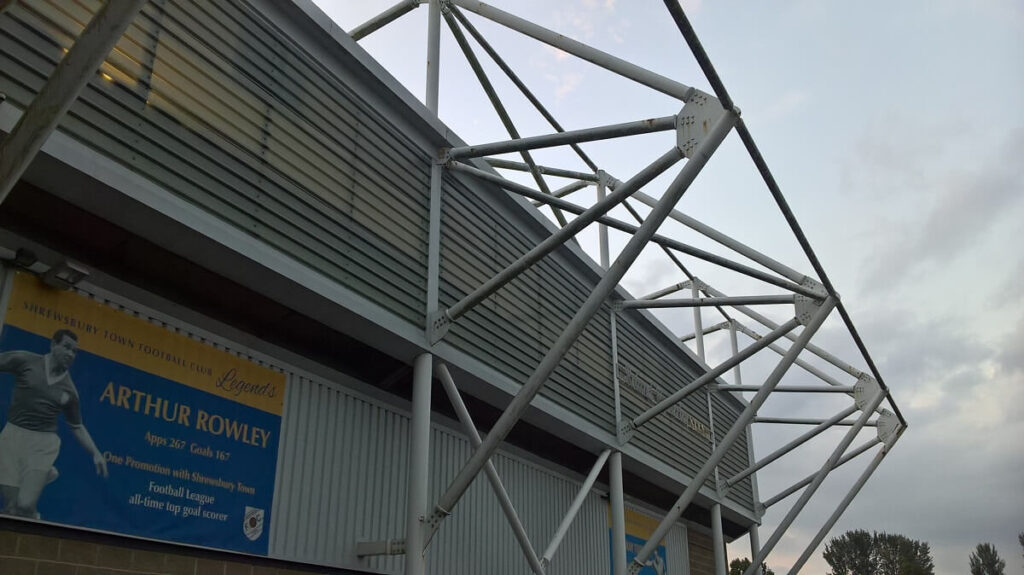 It was the inaugural outing for the brand new Shrewsbury away strip, as Paul Hurst’s men showcased their bright orange strip in the glistening sun at the New Meadow.

Following wins against Wolverhampton Wanderers and Aston Villa in their previous two friendlies, Shrewsbury took about taking yet another Championship scalp.

They would have the better of the opening exchanges. Hustling striker Carlton Morris giving the Bluebirds defensive duo a tough first quarter of an hour.

But it would be Neil Warnock’s men who would bag the opening goal. Nathaniel Mendez-Laing profiting from the excellent wing-play by Kadeem Harris. 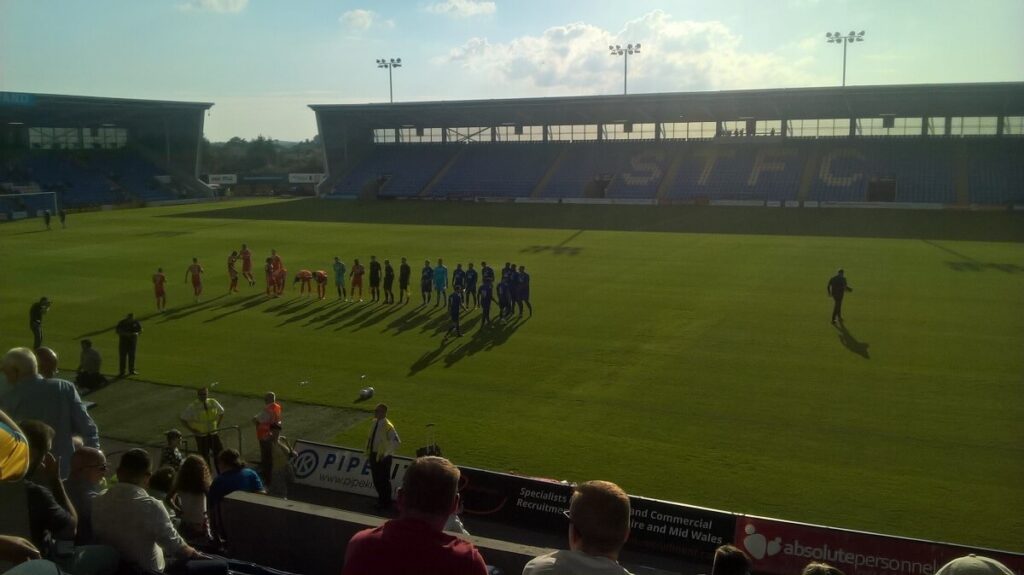 Against the run of play, the Welsh outfit would go down the tunnel with a slight advantage, despite Cardiff keeper Neil Etheridge being called upon on regularly.

After a stern talking to at half time, Shrewsbury would leap into action, Morris earning a penalty inside three minutes. Experienced midfielder Shaun Whalley would then dispatch the spot kick in unconvincing fashion. They all count though! 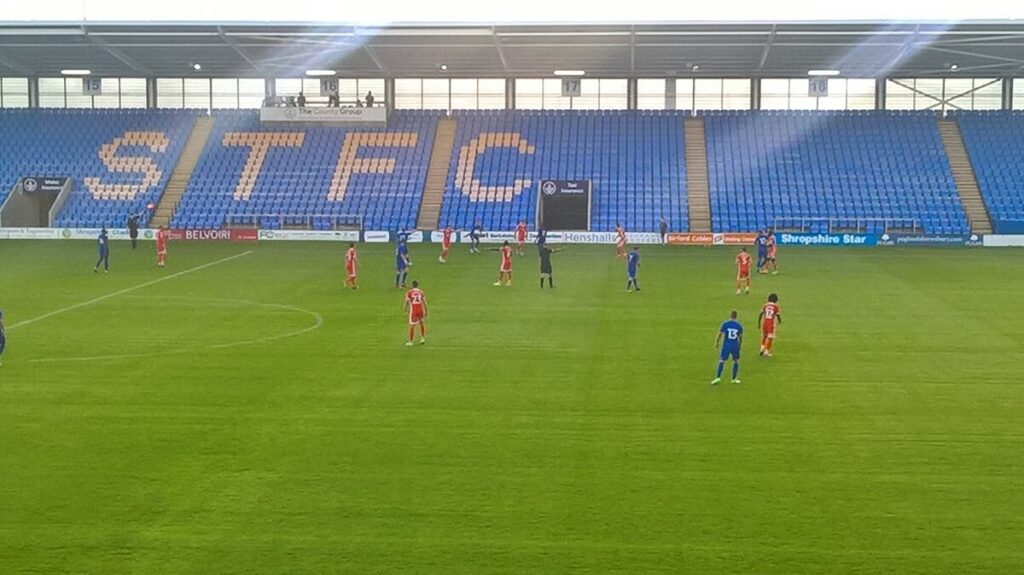 Whalley was at it again two minutes later, driving at the Cardiff defence. His shot kindly fell to Louis Dodds, who composed himself to tap in and give Shrewsbury the lead.

Chances would come and go for both sides in the final half an hour. But the net would not be rippled and Paul Hurst’s side would preserve their unbeaten pre-season record at the New Meadow.

It was another easy day at the office for me in collector corner. Ticking off a number of Cardiff players to add to my collection. The Bluebirds have been somewhat of a bogey team for me in previous years, but finally I was able to capture both Greg Halford and Aron Gunnarson after three years of searching.

I had watched Neil Warnock’s men against Wigan Athletic two months prior, meaning many of players had already signed my grounds book. The always cheerful Warnock was first to arrive, signing various cards from his Leeds and QPR days as well as a classic ProSet card from the early nineties. 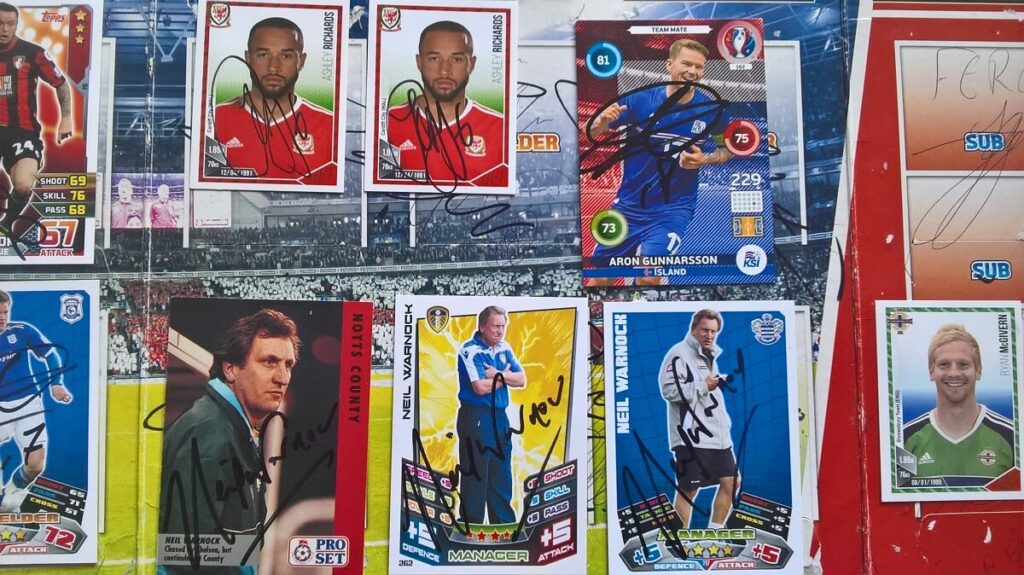 With the grounds book featuring 20 Cardiff City autographs, I turned to my team sheet to catch the remaining players. Following a demoralising loss, many weren’t keen to talk, although it must be said they did sign an autograph.

For any League One collectors, Shrewsbury Town is a simple enough location to collect. All players, home and away enter just around the corner from the club shop, but unfortunately if you aren’t as lucky as me with the weather, you may struggle as cover is limited. 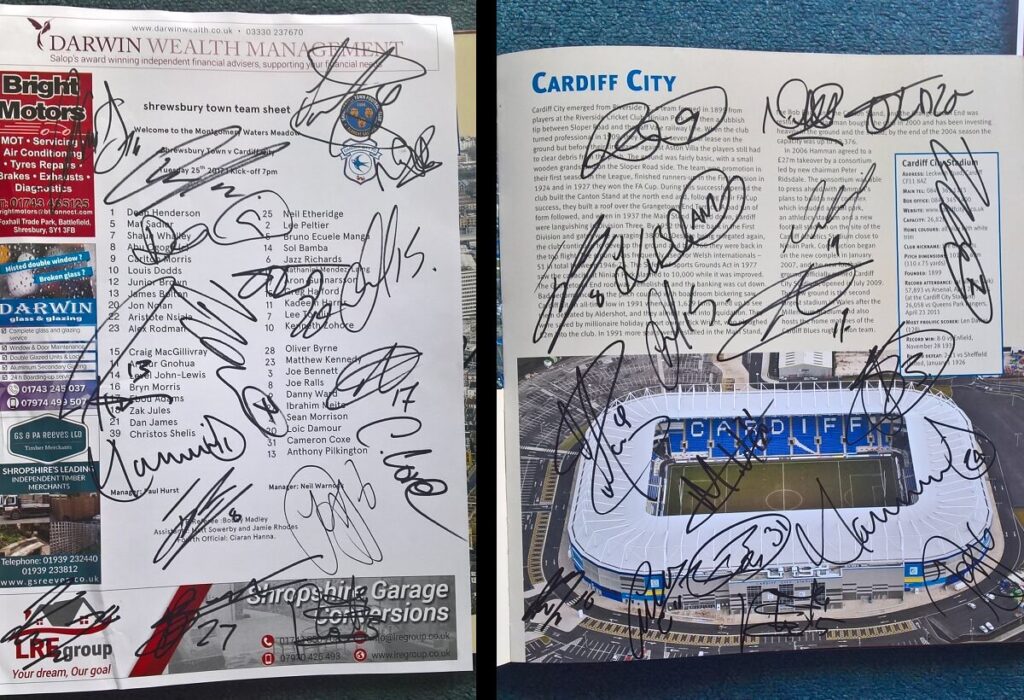 I was glad to check off various trading cards and a new page in my book. Next week I have plans to visit Watford as they take on Aston Villa. Keep your eyes peeled for my report which should follow on the Sunday.

If like Josh you fancy blogging about your experiences doing the 92 league grounds drop us a tweet to @the92dotnet.