After a number of painstaking play off campaigns Grimsby Town finally made a return to the Football League in May. The Mariners victory over Forest Green at Wembley Stadium saw Blundell Park take its place back in the 92. We caught up with Tony from Cod Almighty, the independent Grimsby Town FC fanzine to talk promotion, non-league and what fans visiting North East Lincolnshire this season can expect.

The Groundsman: It was fourth time lucky in the play offs, how did it feel to finally get up after being so close for the last 3 seasons?
Tony: Curiously flat after the euphoria of victory. After all, we’ve just got back to the very bottom of where we are used to being. A bit like finishing detention at school.

GM: Has it been a good summer on and off the pitch for the Mariners?
Tony: The summer was also curiously flat. It feels like the club has crumpled like a bad soufflé: by returning to the league the club returned to its old ways, like a reversion to type. Bumbling, stumbling well-meaning amateurism.

Last summer had Operation Promotion, which raised over £100,000 and maintained interest and excitement through the summer and well into the season. This year…people exited stage left with mutterings about this and that. 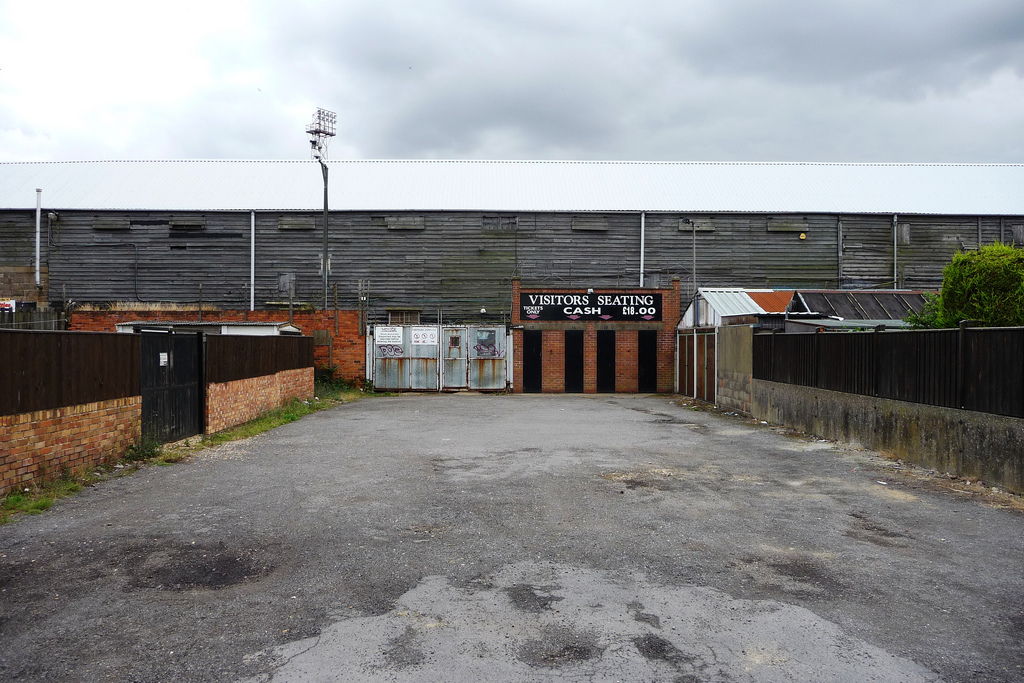 Only five of last season’s first team squad remain, which rather blows away any thoughts of carrying through the momentum of last year. Four other players were offered contracts but declined the opportunity to bask in the East coast glow. All four were ones we really needed to keep: the strongest centre-back and our free scoring Irish rover signed for Hartlepool on free transfers; our right-back has gone to the Scottish Premier League and the most creative winger decided to take his styling tongs to Lincoln. You could say the last two chose to take a step down while we step up.

It’s all very strange and a little dispiriting. The oomph and zest has disappeared.

GM: How many non-league grounds did you manage to get to over the last few years?
Tony: It depends how you count them – grounds of clubs that were in non-league or grounds that are non-league in stature? I took 39 steps into the heart of non-league darkness, but that includes some returnees such as Cambridge and those elevated, like Fleetwood.
Your true and deep non-league grounds were Histon and its avenue of trees, Coalville’s field of dreams and Forest Green’s la-la land in the clouds.

GM: What was your best / worst memory from your travels in the National League?
Tony: Ah yes, the annual chaos in the Aussie bar in Alfreton, the charming cafes of Tamworth, the twilight world of Guiseley, the ghostly motorbike chugging up the hill in Irthlingborough to pierce the silence. Above all we’ll miss the certainty that we’ll get in and be rather welcomed. Apart from old league grounds, everyone was absolutely lovely with a most agreeable atmosphere.

No-one will miss eccentric Forest Green, up in the clouds in New Age Nailsworth or Gateshead’s athletics stadium. Those two are the deepest, darkest pits of football watching. I’d even pity a Hull supporter should they ever endure the long drag up Numptyville Road and endless traffic jam down the hill, or peer into the distance in the wind tunnel that is the International Stadium.
Town not turning up on time for games three times in two seasons was a bit of a downer – especially the one where they never turned up at all on a Friday night. Maybe they’ll be more professional in the League and check the traffic reports.

GM: Being back in the 92 what do you make of the proposals to change the Football League structure to 4 leagues of 20?
Tony: Beware men with vision. What a load of tosh. It’s a silly Trojan horse to try and tempt B teams and/or the Old Firm, but will just end up shunting up the “big boys” from the Conference, Why did we bother getting promoted if all we had to do was sit on our hands to get back in the League?

Forest Green should not be rewarded for existing through a back door promotion.

GM: What can fans visiting Blundell Park next season expect?
Tony: The same as they got when they used to come before. Nothing has changed, except there’s a big screen in the corner next to them – so they can’t see it. But we can, so that’s ok by us.

Away fans will continue to be puzzled by the lack of a fish and chip offering, just the standard gristleburgers and watered down hot drinks, as well as some basic baiting.

GM: How about the town itself, where are the places to go and what are the local delicacies to sample?
Tony: Excuse me, I may need to stop chuckling. There’s plenty of “nitescenes” and bars. Cleethorpes Gateway to the Mouth of the Humber. Sand, slotties, pubs, fish and chips galore, crazy golf, tattoo parlours and a little patch of land down Sea View Street where the literati and glitterati sip their lattes and day-trippers mock their chinos.

St Peter’s Avenue for cafes, delicatessens and Oceans Fish Bar; sea front for your bog standard fish and chip shops; the Market Place for a pot pourri of world foods and bars. If you are in Grimsby you got off the train too soon. Turn round now, get back on the train and never stray from the path.

There’s nothing wrong with Blundell Park, all it needs is the board to accept that this is the home of football and contract a painter and carpenter, rather than chucking their cheque book at fancy presentations and professional fees.

We have a true heritage ground, evocative of times when football wasn’t run by marketing specialists and obsessed with branding and the customer experience. A roof, working toilets, close proximity to the field of play and football pitch. The rest is nonsense.

GM: How many of the current 92 grounds have you ticked off your list?
Tony: I’m not a compulsive groundhopper, I suppose I’d better count them…
…61 current grounds, but that includes Newport and Fleetwood, who I saw in the non-league.
I’ve also been to ten of the old grounds. Our terrible tumblings down the ragged, jagged pyramid have coincided with the rebuilding programmes of many a club, so Colchester, Donny, Man City, Arsenal, Rotherham, Bolton, Bristol Rovers, Chesterfield, Oxford and Brighton are places only visited in their past lives.

GM: Which grounds are you looking forward to visiting this season?
Tony: I don’t look forward to grounds, I look forward to football games. There are places I dislike going to, and grounds I find annoying (as well as some that are annoyingly far away), but I take the view that if an away supporter finds a ground comfortable or nice, then that’s a bad thing for the home team.

Wycombe’s ground is at the end of cul-de-sac, with very annoying parking arrangements (especially if it’s wet, slip sliding in the fields above the ground); Mansfield’s stewards have been jobsworth petty bullies in the past (seeking out the smallest, youngest person to eject). We always get totally stuffed when I see Town at Hartlepool, and I expect Colchester’s ground to be tiresomely shiny with stupid arrangements for parking.

Oh, you want places I don’t dislike. Well, Notts County is not far from me and you can get a nice lunch in the Trent Navigation.

Thanks to Tony for taking the time to speak to us in the lead up to the season. To find out more about the fanzine head to the Cod Almighty website or give them a follow on Twitter @codalmighty.

Have you made the trip to the home of the Mariners? If so you can add Blundell Park to your 92 or if not plan your trip there: