Recently final approval for Southend United’s long awaited new stadium came through meaning work could start within the next month. We caught up with Jai from the Shrimpers ‘All at Sea Fanzine’ to get his thoughts on a big chapter opening in Southend’s history.

The Groundsman: Its been 15 years since the plans were drawn up – do you think they’ll ever come to fruition?!
Jai: There have been plans for a new stadium for Southend for almost 30 years now and fans are deeply pessimistic that the current chairman can deliver on his promises. As a club we have always had so much potential (there are 750,000 people within a half-hour drive and no professional clubs for 35 miles) but have ended up in the hands of the wrong people. Technically speaking we are further forward than we have ever been, but deep down nobody really believes it will happen.

GM: On a more serious note what are your thoughts on moving to a new stadium?
Jai: If the club is to fulfil its potential it is essential. We have been losing money every week at Roots Hall despite relatively healthy crowds for League Two. The ground is old and tired, and does not have the potential for making money like a new stadium would. Having said that, any new ground would be phased and the main stand, ie the money maker, would not be built straight away, so the benefits would certainly not be immediate. 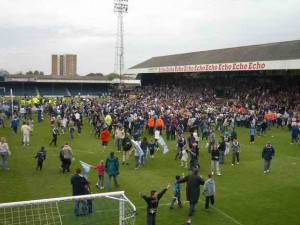 GM: The plans certainly look ambitious – what do you think of the designs?
Jai: The designs look fine, they look different from your standard new ground. Whenever I go to Shrewsbury, Chesterfield or Colchester you could basically be sitting in the same stadium, just in a different part of the country. Unfortunately though there doesn’t appear to be any flexibility in the design to accommodate rail seating and it would be a shame to be left behind as I believe safe standing will make a return soon.

GM: Do you think Roots Hall should be redeveloped or do you prefer going down the new build route?
Jai: Roots Hall won’t be redeveloped. The whole project is being financed because Sainsbury’s want that land for their new store. Our chairman doesn’t have the cash to redevelop Roots Hall. A new build is the only realistic way forward.

GM: What are your best memories from Roots Hall?
Jai: So many to mention. Beating Manchester United 1-0 in the Carling Cup and winning the title on the last day in 2006 when Shaun Goater retired are the two that stand out.

GM: What will you miss the most about Roots Hall?
Jai: It’s a fantastic, old-skool ground. The seats are incredibly close to the pitch, especially where I sit in the South Upper where you are practically sitting on the crossbar. The atmosphere can be incredible if you have a good crowd and a healthy away contingent, which sadly is rare in League Two. Yes there’s not much legroom, the paint is falling off and the toilet facilities are barely worthy of the name, but it’s a great place to watch football.

GM: How many of the 92 league grounds have you ticked off?
Jai: I’m up to the mid-seventies now. I only consider it to be 91 clubs as I do not recognise MK Dons as a legitimate football club. Most of the clubs I’m yet to visit are in the upper echelons, predictably, but I’ve been to every current League Two ground.

Thanks to Jai for taking the time to speak to us. You can keep up with Jai and the All at Sea Fanzine on Twitter @AllAtSeaFanzine or on their website http://allatseafanzine.wordpress.com/