If you follow us on Twitter you will no doubt have seen a few tweets from David Watkins over the past year. The Leeds fan has put his time to good use popping up at grounds all over the country in the last 12 months to get his 92 finished. We caught up with David to find out more about his journey.

Groundsman: Firstly congratulations on completing the 92! Which was your final ground and did you commemorate the occasion?
David: Thank you! My final ground was Roots Hall for the League One game between Southend United and Crewe Alexandra. I had always planned this to be the last one as a mate of mine is a Shrimper and he had agreed to book a table in the Blue Lounge at Roots Hall to celebrate the occasion. I had 6 guests – all football fans and all Leeds United fans apart from Andy the Shrimper! I was presented with a Southend match ball signed by the team and a specially baked cake! 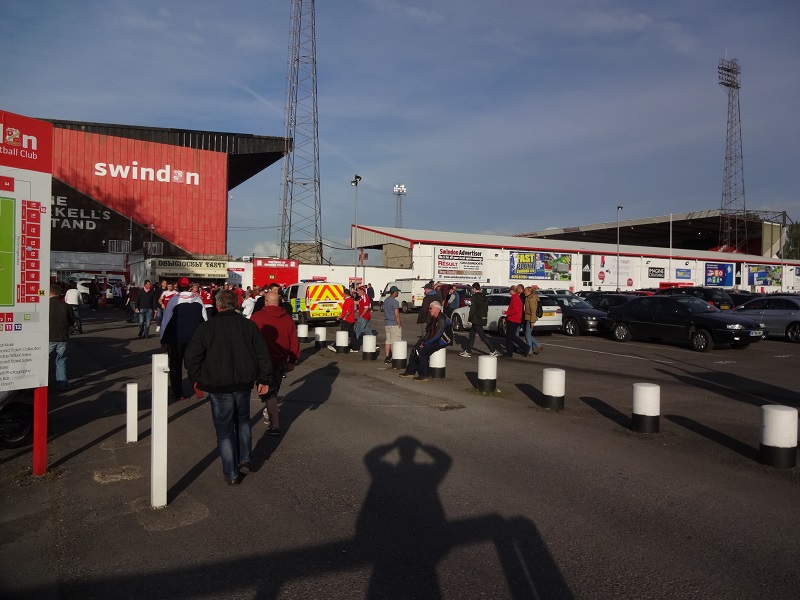 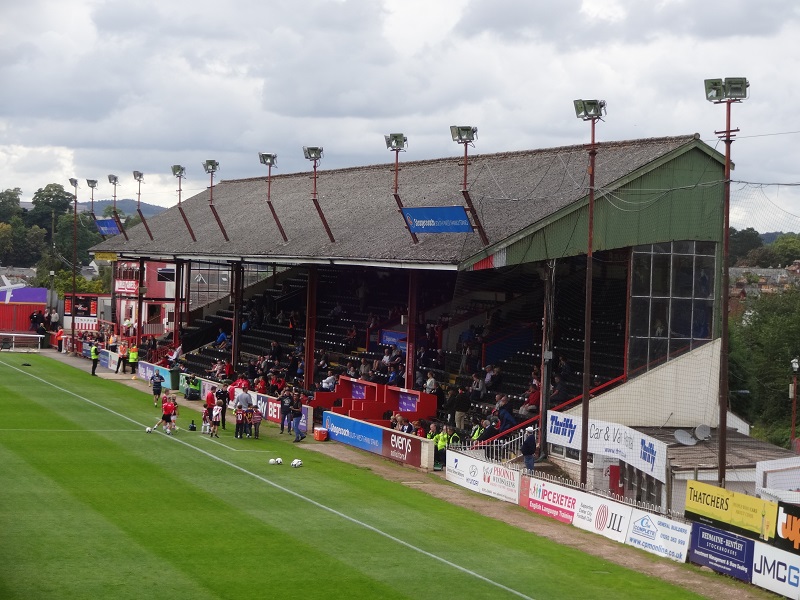 That amazing stand at Exeter

Groundsman: What was the first ground you ticked off your list?
David: The first ground I ticked off was The Hawthorns for a Leeds United game in 1968! When I was young I lived in the midlands despite becoming a Leeds fan very early in life!

Groundsman: How long has it taken you to join the 92 club?
David: As you can see from the previous answer I have been “doing the 92” for a very long time! It took me the best part of fifty years but I have to say I did not actively try to achieve the 92 until January 2015. It was then that a mate asked me how many grounds I’d done and when I got round to going through my programme collection and putting all the games in a spread sheet I realised I was already at 63 at that point. It was then that I started to go to games purely to complete the challenge. I am a home and away season ticket holder with Leeds United as well as being a keen follower of non-league Worcester City; I was born in Worcester. Hence it was a gruelling fifteen months to add in all those “92” games as well! I actually did 80 games in the calendar year of 2015 to break the back of the project!

The gates of the Memorial Ground, Bristol

Groundsman: Which ground was your favourite over the course of your journey?
David: If I had a pound for every time I’ve been asked that question… I’d have a few pounds! My first answer is that I have loved them all and that is really the honest truth. If you were to ask me what are the best stadiums I’ve been to then that is slightly different. I love the Emirates and the Etihad as quality modern stadiums while many of the old grounds like Gigg lane at Bury or The Memorial Ground at Bristol are full of character. As a Leeds fan I obviously love Elland Road too but my first answer is really the one that captures best the way I’ve enjoyed the journey.

Groundsman: And your least favourite?
David: In just the same way as I find it hard to define “favourite” I also can’t really come up with least favourite. There are a few really soulless places – Millwall’s New Den comes to mind in that category – but once again I have enjoyed seeing every single one of them, they all have something different. There are a few that could do with some TLC mind… Accrington comes to mind there!

Groundsman: What are the lasting memories of your travels?
David: “Doing the 92”is definitely one of those projects where the journey is far more important than the destination – meaning that the task of organising and doing the trips and watching the games is far more important to me than being able to now say “I’ve done it”. One thing I have found is that there is a huge amount of praise and encouragement to be gained from fans around the country for anyone doing the challenge. At almost every ground I have had conversations with fans where they have all been in awe that I was even attempting I; in their hearts, every football fan would love to do it and it is only the constraints of time and money that prevent many more going for it. I have a million specific memories from the grounds themselves and for the vast majority I do have photographs of my visits to remind me about them. If I was to pick a few special “views” I would probably begin with the old turnstile block at Plymouth’s Home Park; that amazing thin stand along the railway embankment at Exeter’s St. James’ or the Memorial Ground gates, but honestly there were hundreds of very special memories. I have seen some astonishing games to; a 5 – 5 draw in a play-off semi-final between Swindon and Sheffield United and a 4 – 4 draw at Carlisle v Cambridge this season come readily to mind! 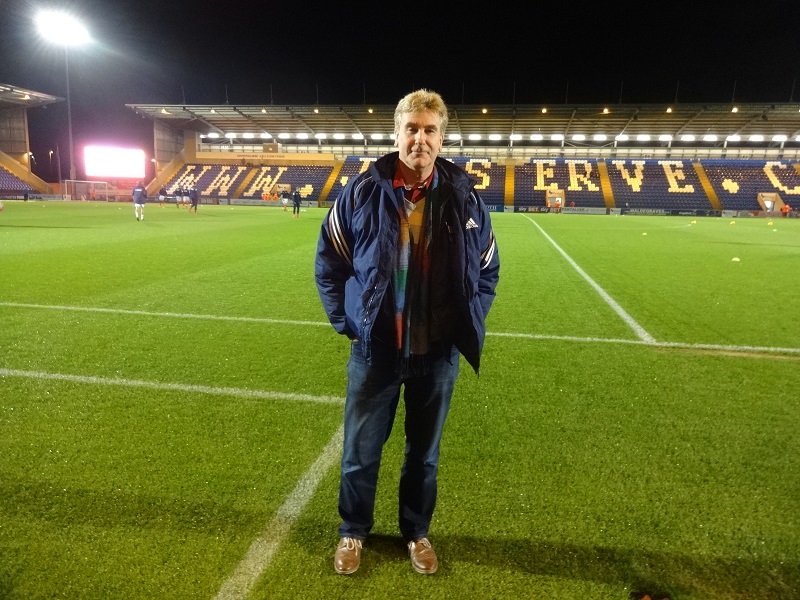 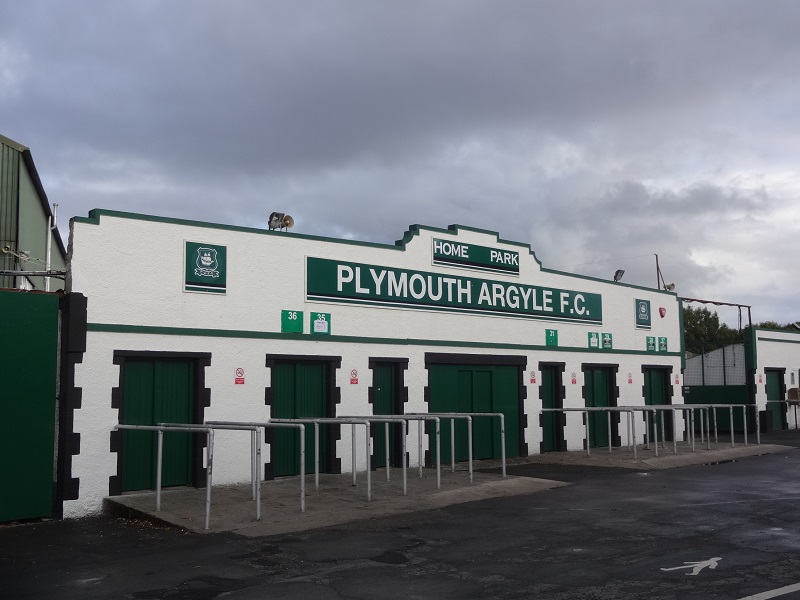 Those brilliant turnstiles at Plymouth

Groundsman: What future ground hopping plans do you have?
David: I met a couple of chaps at Southend who had completed the “116”, i.e. they had also completed games at all the current National League grounds. I did a list the other day and I have already done 8 of the current grounds so I am now going to add those although not at the break-neck pace I used to complete the 92!
In a sense of course the 92 is never complete because each season, more likely than not there are new grounds through promotion from non-league or clubs building new grounds – I already know I have the pleasure of a trip to the Olympic Park Ground to see West Ham next season and if it was Cheltenham and Forest Green that got promoted I haven’t been to ether of those. I intend to make sure I keep my 92 up to date each season.

Groundsman: Finally, as we all know the 92 can sometimes only last a season if relegations and promotions go against you – who will you looking to come up from the Conference?
David: Oops, I sort of answered that in the previous paragraph! Of the current top five in the National League, it looks like Cheltenham plus one from Forest Green, Grimsby, Dover and Tranmere Rovers who would play-off for the second promotion place. Of those the only ground I have been to is Tranmere’s Prenton Park so I really don’t mind who comes up!

Thanks to David for taking the time to reflect on his journey doing the 92 league grounds with us. Aside from completing his 92 David is an avid follower of Leeds United and is a published author on the subject. To find out more head to his Leeds United blog. You can also keep up with his future travels on Twitter @DaveLUFCWatkins and his on the92.net profile.

the92.net is a free service open to all football fans. Register now to create your 92 plus rate and review the grounds as you go!