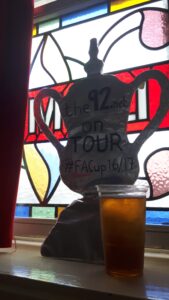 Our tin pot next to the plastic pint mug (for scale).

It had been a while. Maybe five years. Two fanatical football fans, split by geography, conjoined by a love of football stadia, hadn’t gone to a new ground, together, for almost five years. Those two fans are Pete and I, co-founders of the92.net.

Pete has been on the charm offensive, smashing in grounds across the leagues, like Rickie Lambert had goals. His supportive wife allowing him to go and explore the grounds left on his to-do-list, whilst I was chalking up new grounds across Germany and Europe.

We wanted to do some together. We’d discussed doing a 2 in 1, something I hadn’t done (in doing the 92 at least) since October 2010, and the early rounds of the FA Cup offered a great weekend of football. A smattering of games shunted around the weekend for TV coverage, whilst also offering the chance of a famous Cupset!

With my flights booked, and Pete preparing for the draw, we were eager to see what would be thrown our way. Our desired plans for pairings were, of course, drawn away, leaving us with creative licence, dependent on the odd replay result. Followed by the too-late-for-my-liking announcement of the games for TV. We eventually settled upon Bradford vs Accrington Stanley and Blackpool’s home tie against Kidderminster Harriers.

On a brisk November morning, we started our journey, in what I can only describe as typical conditions. I was completely hungover, Pete was über punctual. But alas, we were on our way with the stale smell of alcohol soon filling the car as we hit up the M1, catching up on life and plans. Our tin foil replica cup in toe! 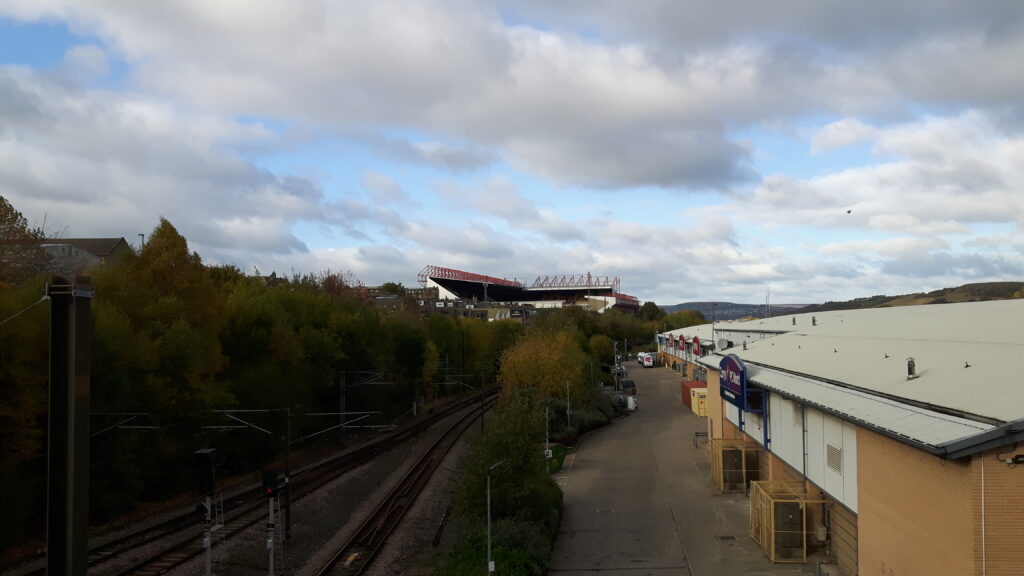 Valley Parade very visible across the city of Bradford!

Arriving in Bradford, with Valley Parade visible across the industrial city scape, we checked into our digs, which included parking. We then ventured towards the ground to find a boozer to quench our thirst. The Bradford Arms had been suggested following a request for help on Twitter.

The Arms of Bradford

The Bradford Arms, although not a classic boozer, had friendly staff and the customers were warm and welcoming. They were fond of our tin-foil companion, but not understanding of why we’d come to Bradford to take in a game. We got talking to a local old boy, an Irish chap who’d lived in Bradford for years, and he talked fondly of the better times, and emotionally about the worse, including the infamous and tragic 1986 Bradford Fire Disaster.

Our stomachs needed replenishment, and despite a sign in the pub suggesting help, only snacks were provided; not good enough for our demands. However, it was suggested we pop up the road to City Café, which we duly did. 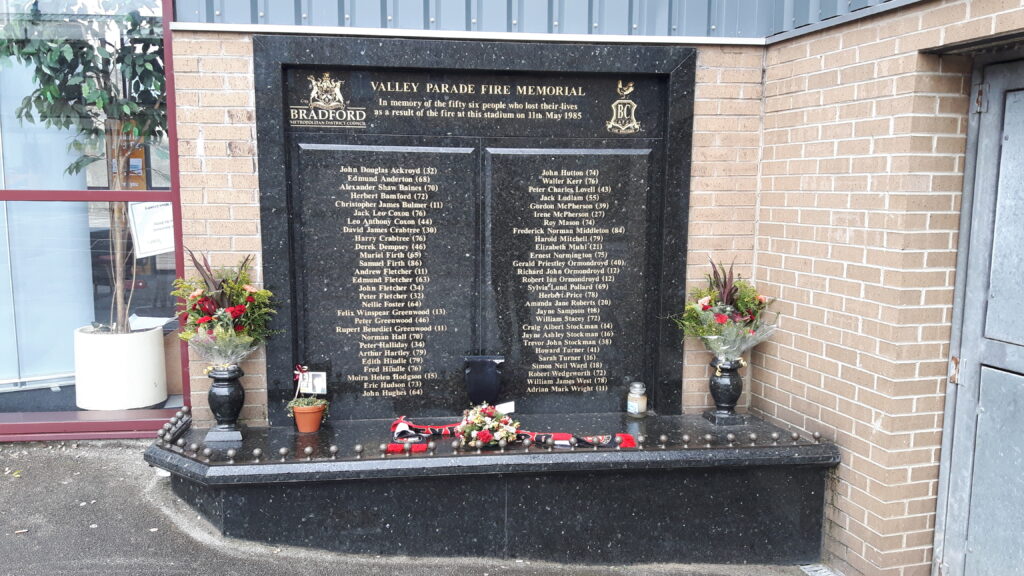 At the City Café, our welcome was resoundingly good, and our host took no time in telling us to try the traditional Caribbean Goat Curry. Two then please sir! As we waited for our grub, simmering smells coming from the kitchen, not helping the famished appetite, another customer came in, and introduced himself. Yet again, intrigued as to why on earth we’d come to Bradford. With our football mad explanation at the ready, he noted that Dean Richards (of Southampton and Tottenham fame) was his cousin.

Our food was soon ready, and the retired footballer’s cousin, a regular at City Café, approved of our selection. Such was the quality, we destroyed the curry in no time. After exchanging around £6 for the healthy plate and some brisk goodbyes, we made our way to the ground, picking up tickets in the infamous Kop end. 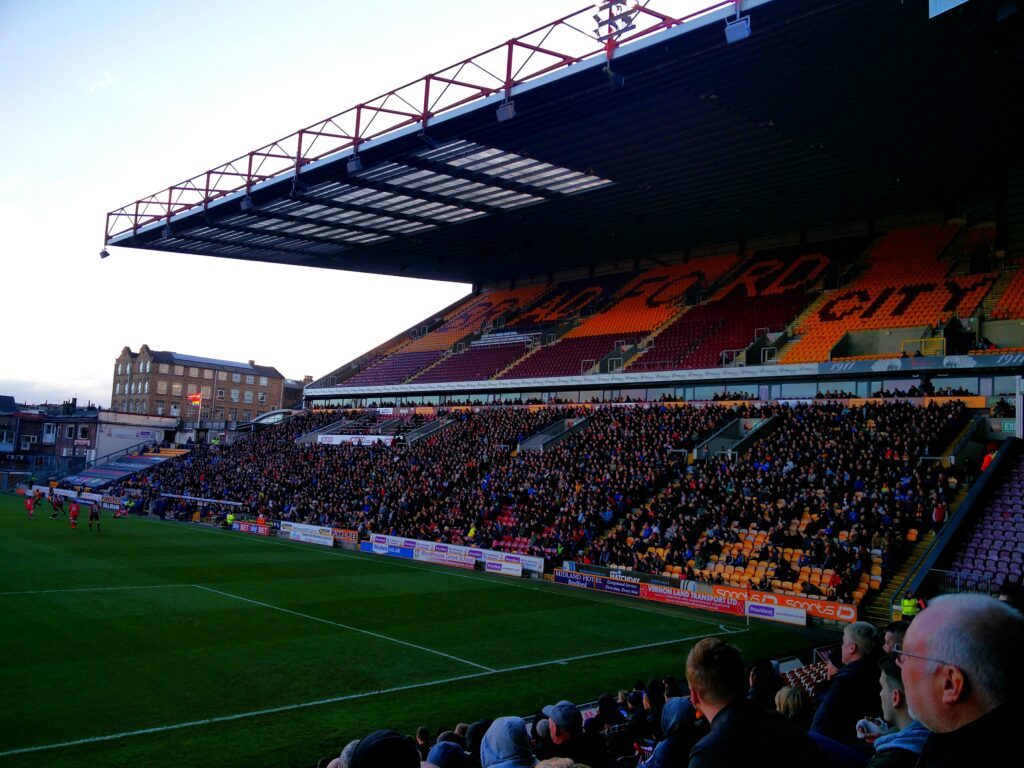 The Main stand with its open end, open to the elements.

A quick concourse beer, and we walked out onto the banked Tribune of the lower Kop, the upper shut for this cup tie; demand not seemingly good enough. The stadium had a patchwork of stands and bizarrely, the large main stand’s upper tier was open faced, leaving the poor supporters open to the elements, great in summer, terrible with horizontal rain and wind force chills. Especially in Yorkshire.

Stanley started brightly, having little respect for the fact Bradford hadn’t lost at home this season. Romuald Boco rattled the bar early on, before the nomadic Benin international headed in a powerful opener for Accrington minutes later.

Bradford managed to get back into the game with a goal from journeyman Yorkshireman Matthew Kilgallon (in some quarters’ given as a own goal), playing for his fifth Yorkshire club.

A panorama from the Kop end, with the Midland Road Stand, the Bradford End, Main Stand and a smidgen of the North West Corner.

But it was another Yorkshireman in the red and white of Accrington that stole the show, with Jordan Clark working the ball well with neat feet and a burst of speed, to work space to find the adjacent corner.

As the game wore down, fireworks started to pop up across the darkening night sky, Valley Parade’s perch over the city offering good views of the colourful Guy Fawkes fireworkds display. Accrington held tight to the end of the game, guiding them into Round 2nd of the FA Cup, and giving us the Cupset!

An Evening in Bradford

We headed to the Bradford Arms for the evening game, a demolition of Everton at the hands of a powerful Chelsea, whilst the landlord and his friends befriended us over several well served pints. It was at this point that we met Danny Rose’s cousin, two Spurs with the beers flowing, we were yet again in need of food, and with Bradford’s reputation, it was only right that we had a curry.

Our search took ensured a courteous pint en route, before finding Omar’s curry house. It was a bring your own ale affair, which we duly did, before discovering Omar’s sold Naan bread the size of bed sheets. If you ate one of these beasts, you’d be eligable for a holiday for your troubles. We didn’t opt for this. Instead, we settled on a couple of reasonably priced curries, appetisers and some smaller Naans. Once our appetite was sated, we headed to a very relaxed bar called the Sparrow, where again, our FA Cup got us some attention, whilst we minded ourselves to a couple of Czech lagers. 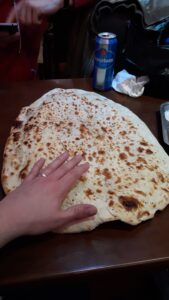 After a few more Czech lagers, we decided to head to our lodgings for the night, the Ibis. The Hotel chain always provides clean, compact and concise rooms, and today was no different.

We were both disappointed to not have seen a bigger attendance at a ground we both remember being full from their Premier League era. However the ground has a great mix of varied stands, and the view of the city and valley give it an extra edge.

Atmosphere 2/5: Difficult with it being a cup tie, but there was enough of a buzz with the supporters who were there.

Value for Money 4/5: Good prices, discounted for the Cup, which begs the question, why so few fans?

Pint Rating 1/5: I detest Carlsberg and any place selling it.

Character 4/5: A classic centre of town build, with a decent mix of big stands, and slightly older and more characteristics. The doubled tiered stand where Paul Scholes scored THAT goal is a classic.

Overall 4/5: A great stadium, made better by the Yorkshire hospitality and a Cupset. It is often the people who make the day, and that is a fundamental part of ground hopping.

You can keep up with Michael’s 92 on his the92.net profile and on Twitter @mossinhk.

Have you made the trip to the home of the Bantam? If yes, you can tick Valley Parade off your 92 checklist or, if not, plan your trip there: