In a normal summer, eight weeks between football seasons can be hard for a football fan. No build up to the weekend game, no midweek cup action and the awaiting of other results to affect your team’s league position. Then every even year, there is a tournament to make 4 of those 8 weeks intense, with football almost everyday throughout. This year, if you didn’t know, was Euro 2016, with two time winners France the hosts.

Several friends and I jumped at the chance to trace across the southern parts of France, through Lyon, Nice, Marseille and St. Etienne, before a speedy train into Paris for the last couple of days of our journey. This article covers our start into Marseille. 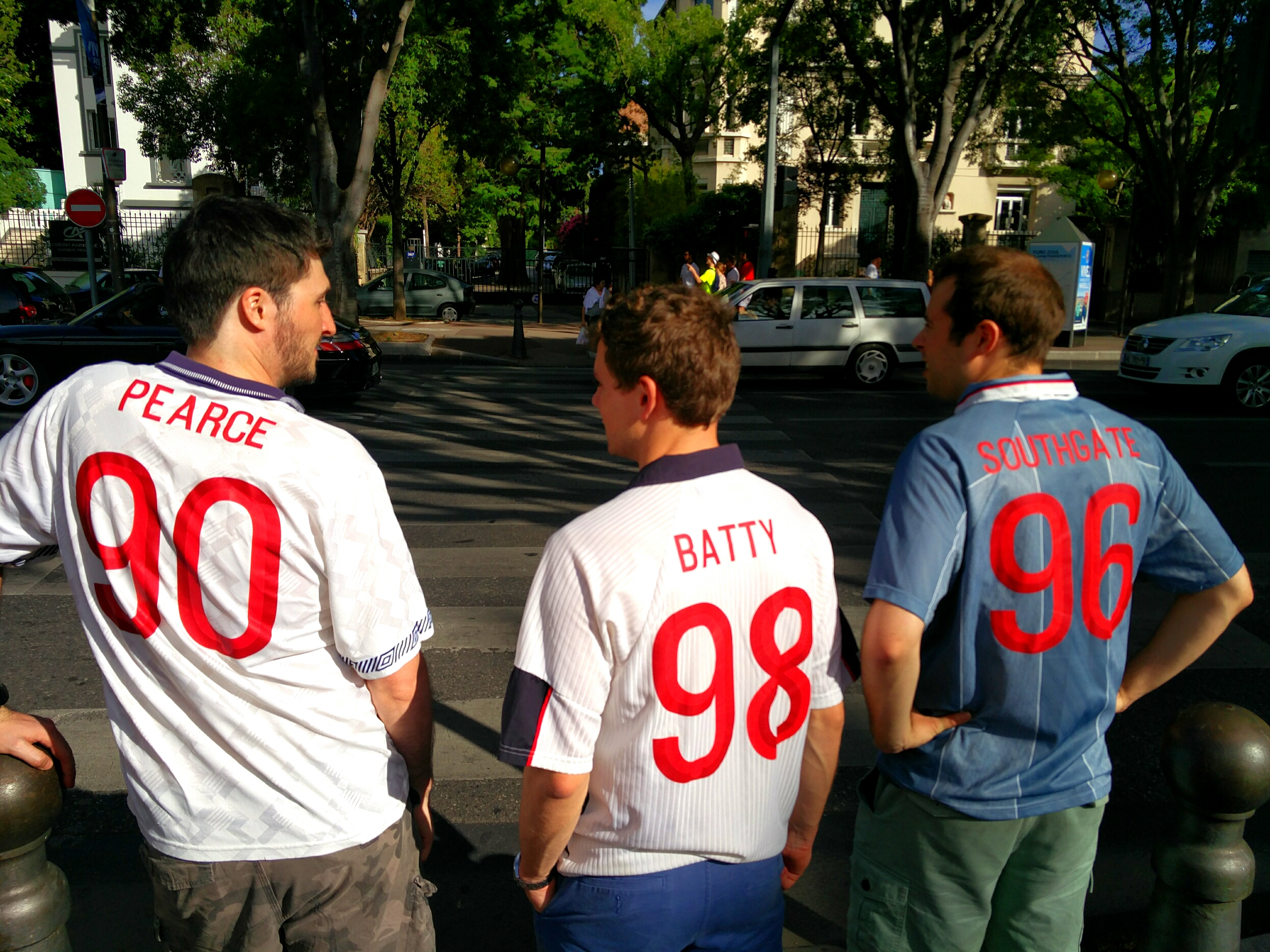 England fans seeing the funny side of their penalty failures.

With the usual hike of prices for flights during any major event, we found a massive saving to the start of our journey flying to Geneva, Switzerland, although the saving was probably expended on the afternoon beers by Lake Geneva, before taking an afternoon train to Lyon playing “Top Trumps” from around Euro 2004, for the first night opening ceremony. With Cristiano Ronaldo the youngest player in the pack (1985), the age of the pack showed.

After settling, a brisk walk took us to the Lyon fan park, a loud rendition of “La Marseilles” pounded around the walls of the temporary arena before the start of an interesting and slightly tentative France vs Romania game, with the game over we enjoyed the city zone, before witnessing the police and some french fans having a game of cat and mouse as we chowed our evening kebab, a little tipsy from our evening quaffing of the ever bland and acidic Carlsberg.

Our chat, before we cruised onto Marseille, over a healthy breakfast of cheese, meat and a few croissants, was of the unfortunate trouble our compatriots had been causing. Before a ball had been kicked, some chairs and tear gas had been distributed to turn Marseille into a war zone. 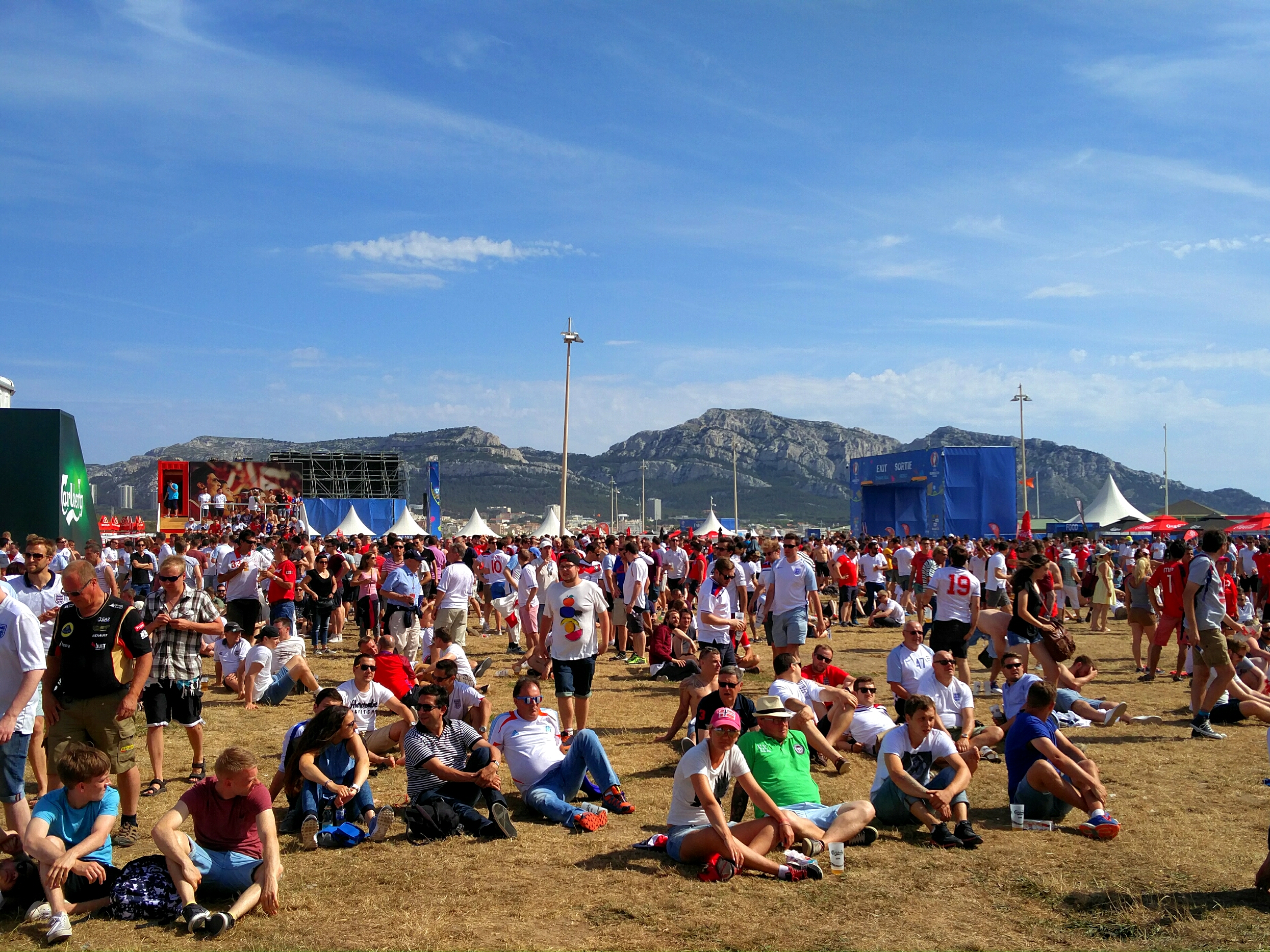 Marseille Fan Zone, split for Russian and others.

Although with that news, plus the increased security because of recent terror atrocities, it was still a minor surprise to see the beefed up security (read big blokes with even bigger guns) upon our arrival into Marseille. Before we had even left the station, we had the statutory offer of tickets from a scouse lad.

Despite a minor problem with Taxis, given they weren’t running due to the announced trouble, we avoided the Ingurland trouble in the Old Port, refueling in a spot near the fan park, passing several bars, full to the brim of over lagered and underdressed fans, singing their passionate war cries. With our troop equipped with tickets, we were able to enjoy the afternoon sun and football, before taking a cruise towards the stadium.

The walk was long before we found anywhere selling a refreshing beer, and it was no surprise to find the first watering hole overflowing with fans watching Wales ease to victory over Slovakia. With several hundred fans, full of voice and lager, it was some surprise to suddenly see the crowd disperse, to reveal just a couple of small but staunch Russians. As England fans lay spread over the flow, I watched on to see one repeatedly kicking a man on the ground; my instinct took over, I shoved away the perpetrator, receiving a succinct blow to the jaw as reward. The guy I had labelled a moronic moments earlier, was spared, but as my friend was quick to point out, it wasn’t my battle and I was no hero.

Our group shocked to silence. The Russians had been brutal, quick and prepared. The English on an opposite faded page. We maneuvered tentatively towards the ground, the impressive Stade Velodrome, with its new roof, breaking the line between trees and skyline, and as we encroached closer, the masses of fans grew, the English were hanging in trees, mounting fences and climbing lampposts, singing their “Ten German bomber song”, seventy years out of date and taste. The atmosphere was never threatening, despite the moronic nature.

We broke the walk to the stadium with another beer, gathering nearby, the number of Russian fans was minuscule compared to the swathes of England fans. We headed onwards, our approach hindered. But by what? On closer inspection, the gate through had been closed. Why? With 70,000 fans trying to approach, why increase the route to the ground? 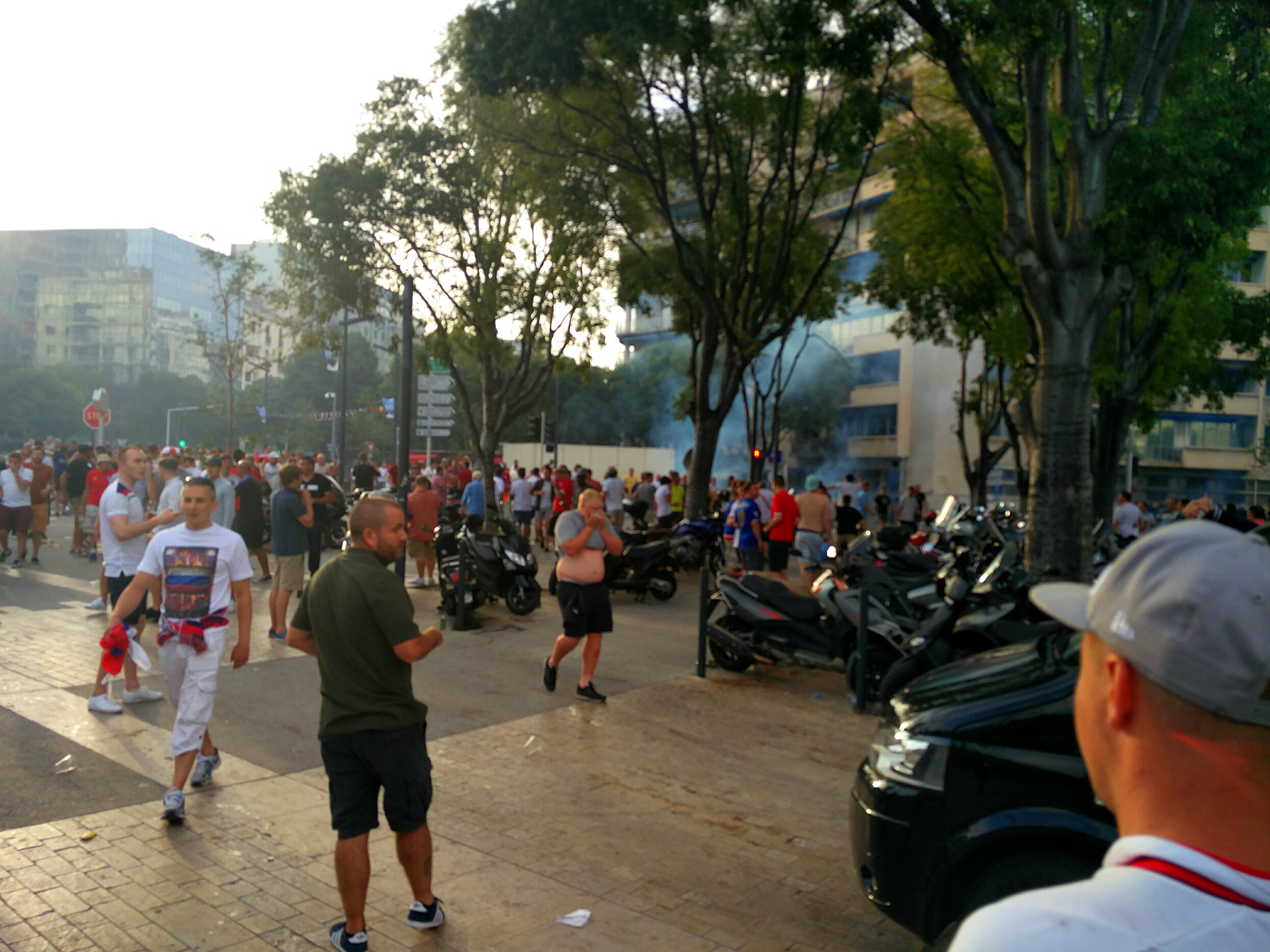 As we ambled around, chaos behind us erupted, police with riot shields enchanting disgruntled England fans. Suddenly a billow of grey rose from the chaos. Tear gas. Despite being some 60 metres away, it soon reached us; eyes itched, throat tickled, taste unpleasant. The crowd around us swarmed away. The ability to control a crowd was a lesson the heavy handed French police weren’t learning.

We swarmed, the abrasive taste of tear gas in our mouths, to the tight entrance to the ground, eventually moving into the outer part of the stadium, relieved to be away from the mob behind us, impressed with the stature of the new roof of the Stade Veledrome. Initially I was unsure of the roof, memories of the World Cup in France 98, the vast, stretching, curving stands, Barthez and Blanc in their pre match ritual in the baking summer sun, this time replaced with a tinderbox atmosphere, enclosed by the wrap around roof. If the alternative was, as is all too common, to replace this stadium with an out of town stadium, then I grudgingly accept the roof. 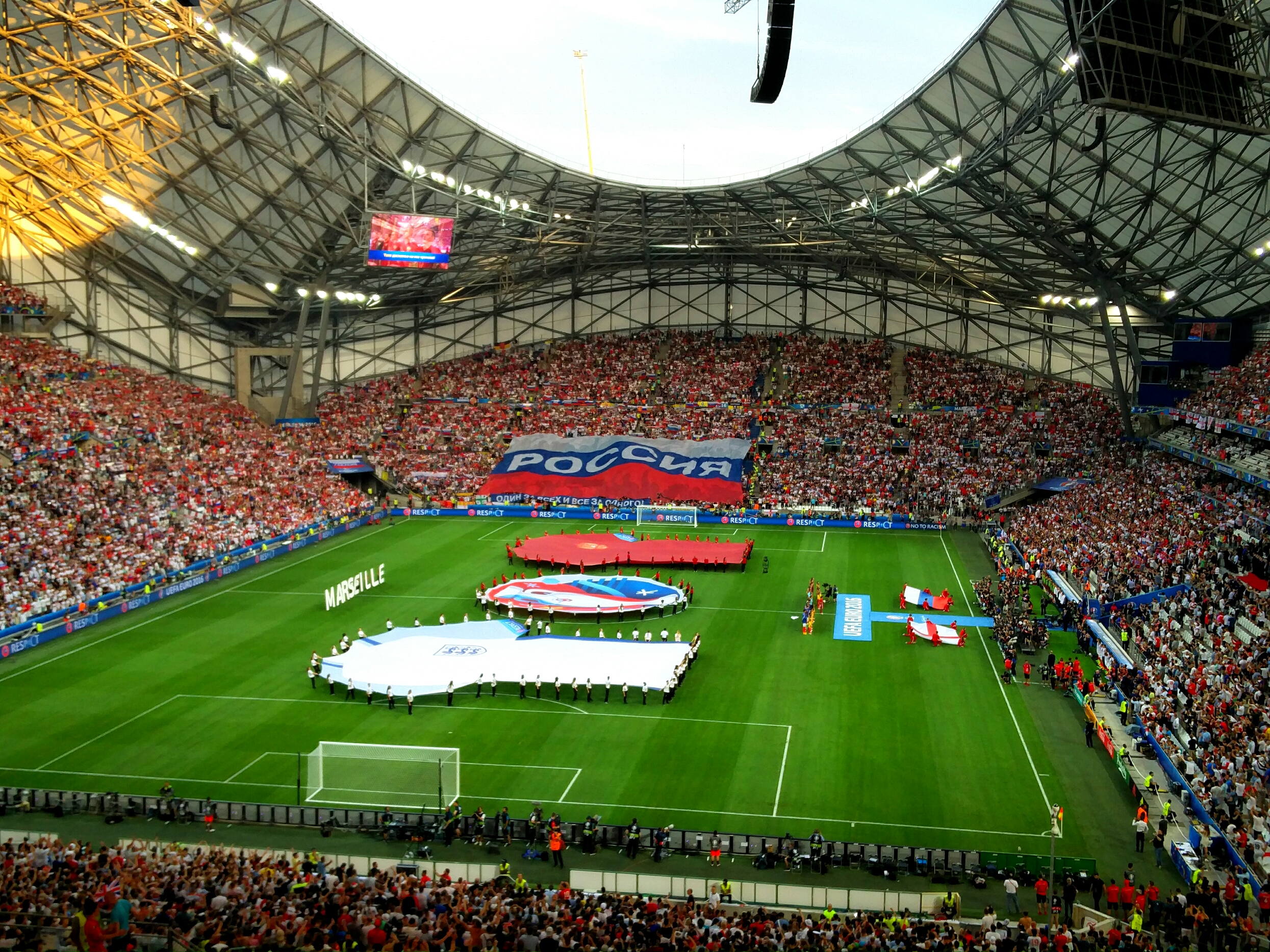 In my obsession with the homes of football, I maneuverer, at ease, around the stadium, getting good views before the game started, a timid, classic England at a football tournament display, against a Russia team offering four debutants the chance to cause an upset. The England fans, hugely outnumbering the Russians, were loud, the stadium rocking to the national anthem and the Three Lions roar! Despite taking the lead, England failed to kill the game off, with the sneaky Russians striking late, and not just on the field.

As the final whistle went, my vision was drawn, the opposite stand to us, half cleared, in seconds. I looked to the edge of the curving stand, where I saw people jumping over the end of the stand. I’ve never seen that volume of people clear in a stand so quickly, the people rushing away from something. Then it came to me. There was fighting. Not a huge amount, but enough to scare people into jumping over part of the stadium that weren’t supposed to.

We departed the enormous and impressive stadium, heading for a nearby beer to wait for the crowd to disperse, discussing what we had witnessed.

The English Hoolie is No More 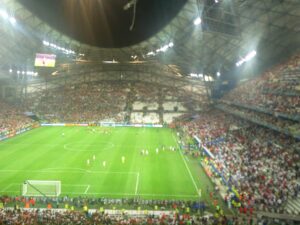 The rushed stand of the Stade Velodrome.

My conclusion was that the England fans behaviour had been raucous and drunken, their bravado could have been seen as slightly threatening and moronic. The Russians were super organised, hard as nails and were certainly not drunk, but they wanted the english hooligans of the 80’s and what they got were the new age lager lout English football fans.

It’s because the market towns, industrial valleys and city estates that these kids hailed from have been denuded of their working class history. The culture that spawned the loveable rogue that was the English football hoolie is no more.