After the madness in Marseille, we were relieved for our early sojourn to Nice for the Northern Ireland vs Poland game, with a brief stop to purchase breakfast in Avignon. Our onwards train was overcrowded due to some French striking action and it was causing problems for other travellers, meaning our seat reservations were taken, and despite a brief disagreement on principles of people in seats who were victims of their train being cancelled, we all settled down to enjoy conversation, befriending three Canadian ladies who were taking their vacation to enjoy the Euro 2016 experience, discussing our journey so far, and what we were most excited to see in the coming days. The Top Trumps and Shit Head card games were unplayable in our cramped and awkward positions. 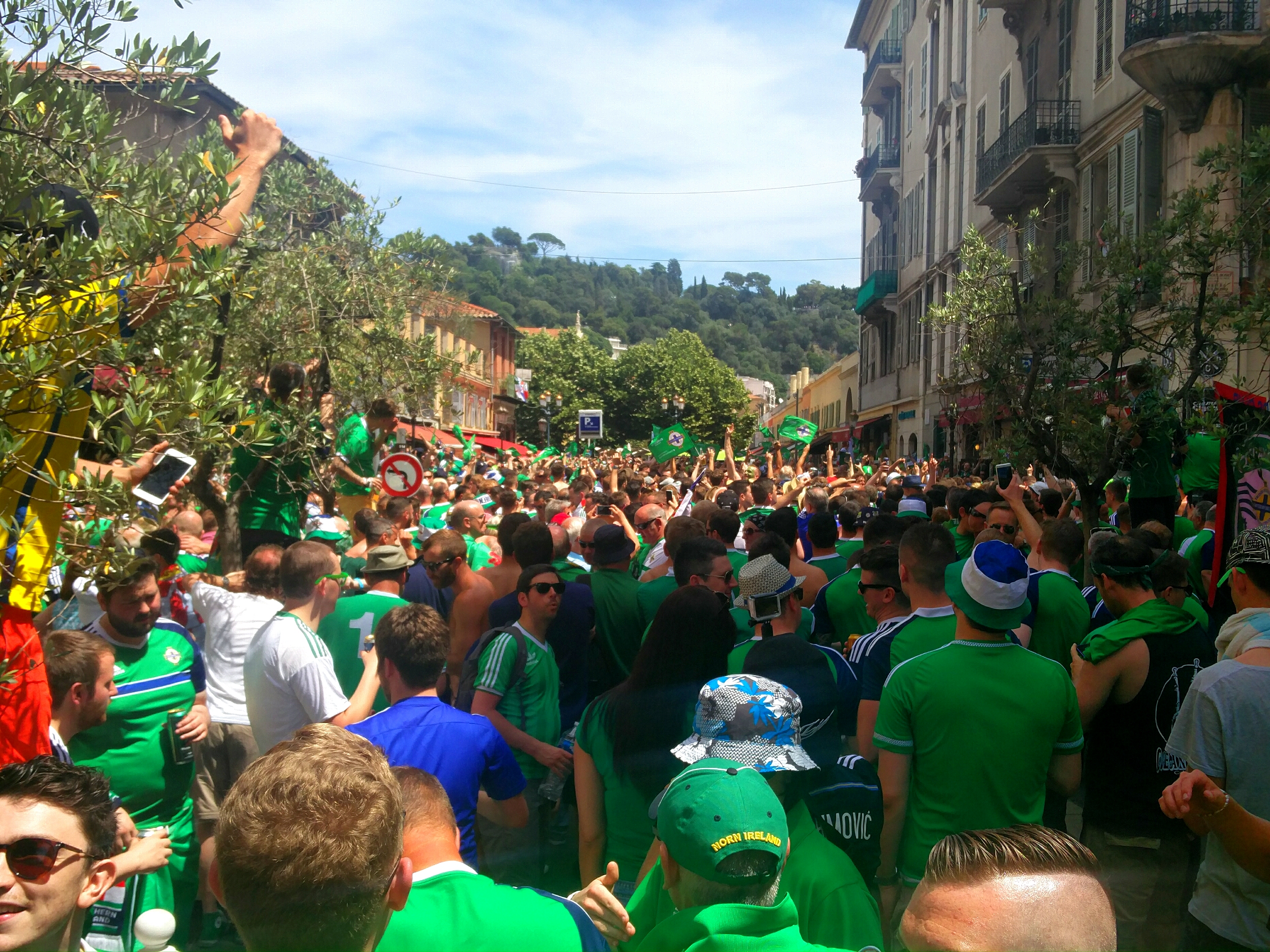 Northern Irish fans dancing in the streets of Nice.

The number of passengers decreased as we approached Nice station, just before midday, our safe house for our two nights stay just a small saunter around the corner. Me and my roommate hit the jackpot with our room, bagging a neat balcony, enough for several people to enjoy a limited, yet serene view, of the quaint city street we were on, with the warm sun beating down.

With several hours to kill, and still no match tickets, we walked to the beach, engaging with some “enquiries” to anyone with football shirts on along the way. After some liquid amber refreshments, we wondered around, being drawn to a thunderous noise several streets over, to find the whole street full of Northern Irish fans, singing away, cheering, and of course, renditions of “Will Grigg’s on Fire”. The atmosphere between the fans, and the police, was relaxed and enjoyable, a stark contrast from the horror show in Marseile.

We ate a small trawler of moules mariniere, it was all you can eat after all, before deciding, despite trying to get tickets, that we should chance it at the ground. Our information was that there were buses to the ground, so we jumped on a bus near the Fan Zone to the new Nice ground. After a 30 minute bus journey, the bus pulled over and we all disembarked. Yet still no stadium in sight. Ushered along a small temporary path, which reminded me of the tournament experiences in developing countries. 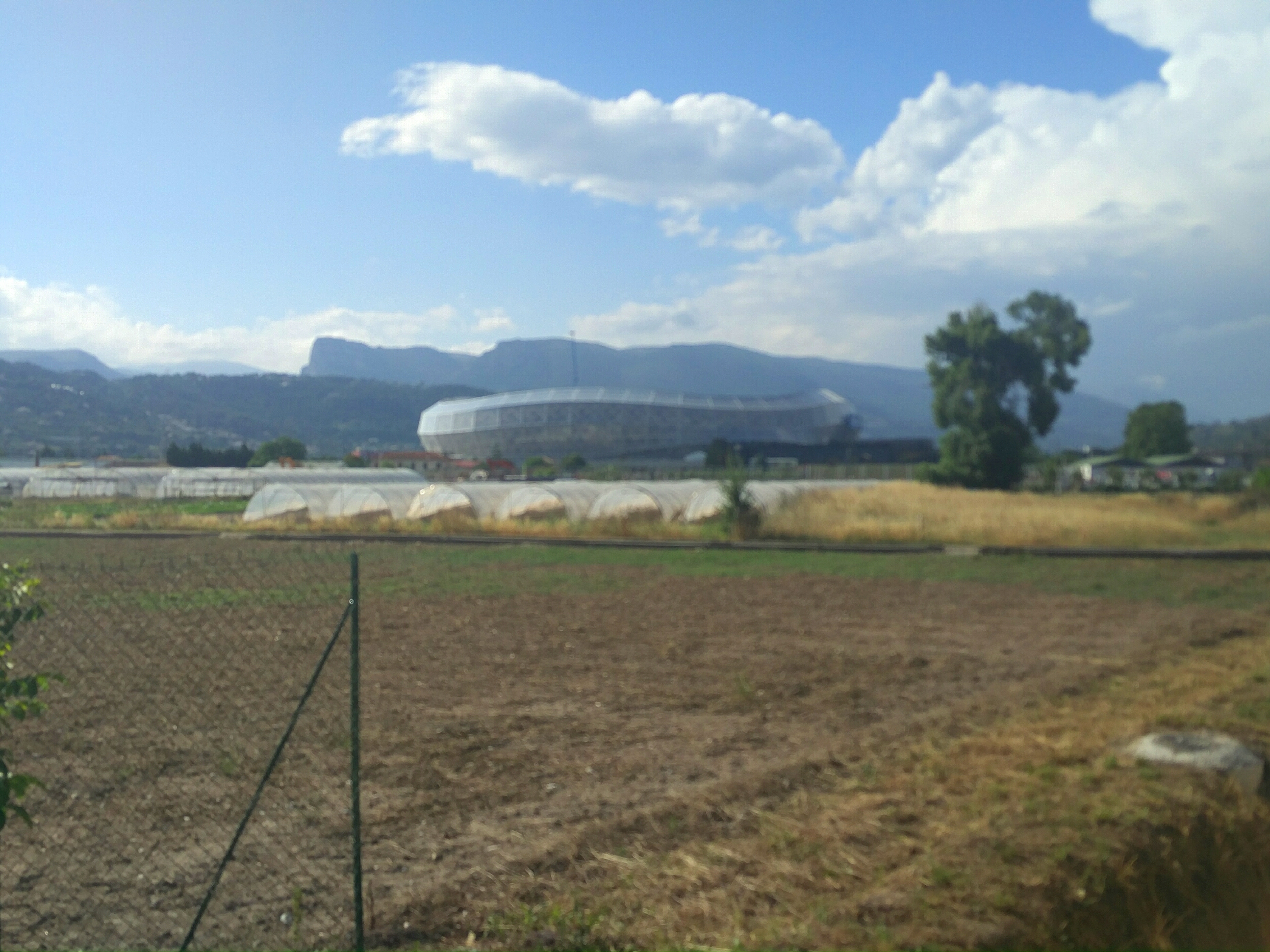 A distance shot of the Stadium, towards the end of the walk.

The stadium came into sight, still a hell of a walk away, however, we had landed the first four tickets, with some skilful negotiation, before carrying the ominous walk, in the beating heat of the day. The stadium just never seemed to get closer, yet, still two tickets short, kick off was. We made more enquiries along the way, and one particular Polish hero was making his, however not for match briefs, but booze. In all honesty, I really don’t think he need much more.

After nervously getting through the turnstiles (read: digital scanning things and yet more beefy security personell), again, no segregation, with the ability to walk around effortlessly. We went to our seating area, before realising that it was just “perch where you could”. To our amazement, a couple, with a child just a few months old, that we had seen in Marseille, were next to us. 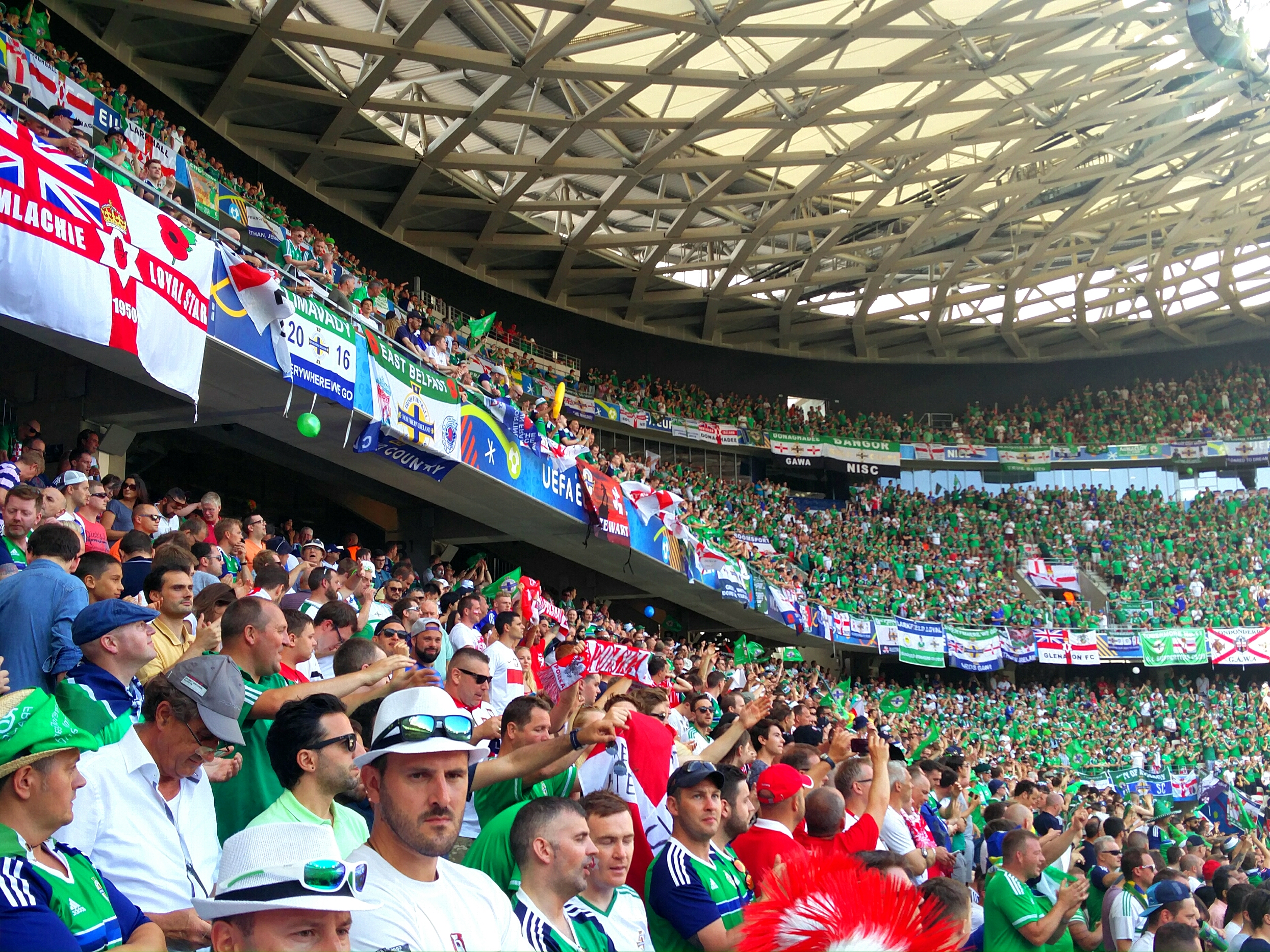 The sea of Norther Irish green taking a third of the stadium.

The Irish and Polish were out in number, one chunk of the stadium a shimmering green, the other chunk a red white mix. Both full of voice and of drink. The game was a basic affair, with Norther Ireland not offering too much, in fact not a single touch in their opponents half in the first half. Milik scored a good effort in the second half, for Poland, before the boys in red and white patiently waited out the result. Despite the result, Lewandowski was well marshalled from the boy in green and white.

Here for a Nice time

With the knowledge that the walk and transport mission were epic, we made fast tracks at the final whistle to get back, trudging and a pace in the slow but hot evening sun. The number of busses waiting was phenomenal. What is the environmental impact of all these diesel drinking fan wagons? Why is there no public transportation? Why do these stadiums keep popping up in arse end of nowhere, making it impossible for the public transport user to get there?

A shot of the main stand, which has a smaller feel to the giant Munich stadium (sponsors are the same!).

Once back in the old town, sampling some more average french beer, the Northern Irish fans, despite the result, were in good voice and spirit, and there wasn’t a problem, or tense atmosphere. The Polish and Northern Irish mixed well, sharing songs and laughs. This is what this should all be about, not the Tear Gas Army running riot in Marseille, scaring any living creature with its moronic nature.

The evening heat and noisy crowds became subdued. Our action packed first three days, taking in four cities, two live games and the other five televised games, were to be rewarded with a beach day at Menton, before having evening beers in Monaco. We would of course watch the live football, but without the rush, before we headed onward to Lyon and St. Etienne for yet more European Championship football.