We catch up with blogger ‘Talking Scunthorpe’ to get his views on what impact Greg Dyke’s plans could have at Glanford Park.

Groundsman: Initially, what are you thoughts on the FA’s proposal to bring in B teams to the lower leagues?
TS: Disgraceful if I am honest. They want to ruin the Football League so Premier League youngster can get game time however what they forget is that the games will end up like friendlies and players won’t be bothered about result.

Groundsman: How do you think this would affect Scunthorpe?
TS: It would affect Scunthorpe a lot due to who wants to watch Scunthorpe United v Crystal Palace U21? Our attendances are not great anyway and they would be even lower due to this. We will have been cheated by the FA because to them there is no football outside the Premier League. We would get even less revenue off the gates because Arsenal fans are not going to travel down to Scunthorpe to watch their youngsters play and why would they when the first team are playing on the weekend. Our fans wouldn’t turn up to the game because it says that your clubs isn’t worth anything and we are just going to ruin it because Premier League clubs stock pile players.

Groundsman: Would it impact on the ambitions of the Iron?
TS: Revenues decrease, so the less money we spend the less likely the club are to go forward. We are moving in to a new ground because the Glanford Park facilities are not great, would we move in to a new stadium if we were playing b teams? I don’t think we would. We wouldn’t be able to afford it as the whole Football League would of been ruined because Premier League clubs stockpile. 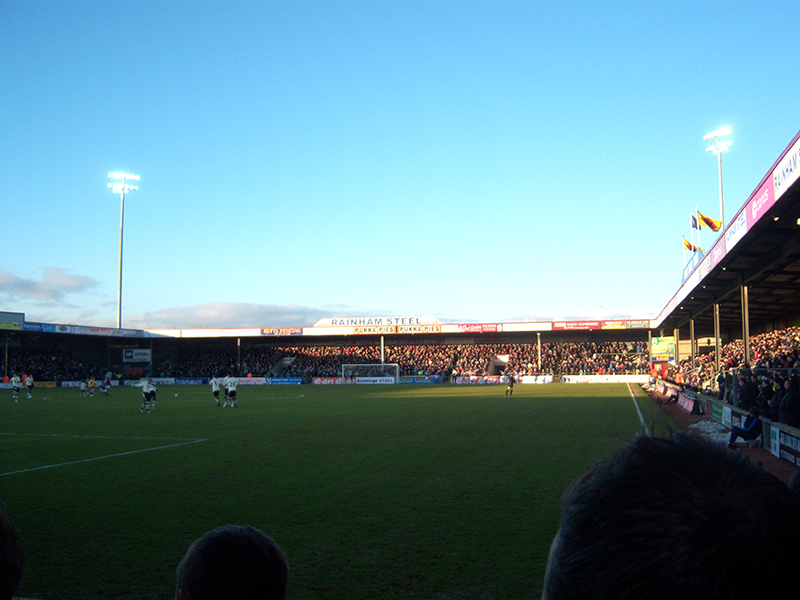 Glanford Park, the home of Scunthorpe United by @SmudgeEFC1985

Groundsman: Would you be happy to see your side play in a competitive league against a Premier League B team?
TS: Short and simple answer is that would rather pay to watch a pub side then my team play Stoke B in a so called ‘competitive’ game.

Groundsman: Long term would do you think the introduction of Premier League B teams would have on the lower leagues in general?
TS: Low crowds, plus players will be more interested in moving to the Scottish Leagues which are not great but at least they are not being forced to play a side that doesn’t belong in their league.

Groundsman: Do you think clubs like Scunthorpe have a responsibility to supply the England team with players?
TS: Every club should produce players for England but it isn’t our fault that Premier League clubs hoard youngsters that could actually have permanent contracts and be playing regular football for a lower league club. How many have Chelsea got at their club and how many are actually going to play for the first team when Chelsea go out and spend 30 million on a proven top class player whenever they need one.

Groundsman: Are there any alternative actions / measures would you like to see taken to address the issues identified by the FA?
TS: Limit the amount of youth players Premier League clubs can have on their books otherwise England will just get worse and worse. More highly qualified coaches in our country would help England as well. We don’t have an English manager in Champions League how are we supposed to win the World cup if they can not match it with managers like Mourinho or Ancelotti. The FA only care about the money and I guarantee this will be the end of the Football League structure and people will loose interested in football as their team will have been destroyed. No crowds equals no revenue and no revenue equals no football club. The whole thing is just a stupid idea. These youngsters at Premier League clubs think they have made it and how many actually force the club to get them out on loan to play football? Most of them are happy to get paid by the top clubs and won’t go out of their comfort zone for their career which is a shame because some of them are very talented players but all most of them know is the Premier League.

You can check out the Talking Scunthorpe blog by visiting http://talkingscunny.wordpress.com/. Have you been to Glanford Park? You can add it to your 92 here or if you’re thinking of going plan your visit using our away day planner here.