The Football Supporters’ Federation (FSF) has announced it is launching a campaign which aims to reduce away ticket prices and help make football more affordable.

The Score Campaign: Twenty’s Plenty for Away Tickets will be launched with an event in Manchester on Thursday 24th January. Further meetings will be held across the country including one in London on Thursday 31st January. 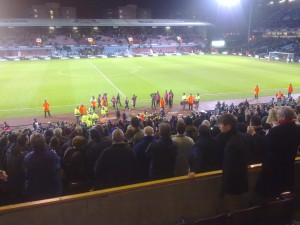 Last week it emerged that Manchester City had returned more than 900 tickets for their trip to Arsenal after fans refused to pay £62 to watch their team.

The FSF called this a “watershed moment” and said that fans all over the country are united in their view that tickets are too expensive. The national organisation said it hoped to bring together rival sets of fans to speak with one voice.

Nine out of 10 fans who completed the FSF’s 2012 National Fans’ Survey said that ticket prices were too high. Four out of every 10 said that they were attending fewer matches because of ticket prices.

The FSF said the problem is especially acute for away supporters who are hit with a double whammy. They must cover spiralling transport, food and refreshment costs in addition to paying some of the highest prices for football in Europe.

“Those who follow their team away are the distilled essence of the football fan – the hardcore. Without away fans the atmosphere at games dies and football loses a large part of what makes it so special.

“Travelling supporters spend the most time and money on their team and that deserves recognition and reward. In the short term clubs might make a few extra quid by squeezing away fans dry but long-term vision is required.

“Away attendances are in decline and something must be done by the clubs before that becomes terminal. Who wants to go to games without away fans, games without passion?

“We believe that an away ticket price cap of £20 would make football more affordable and halt the decline in away fan attendances. The Score Campaign aims to make this a reality.”

The FSF will hold a series of events across the country in support of the Score Campaign: Twenty’s Plenty for Away Tickets. All events are free of charge and open to all fans – for more information visit www.fsf.org.uk or email tickets@fsf.org.uk.