With the new season underway blogger pb1uk sets about continuing his journey towards the 92 club with a trip to Cambridgeshire.

For the first time in a number of years the ups and downs from the Football League didn’t effect the number of grounds left to do on my 92. Enter stage left West Ham. The Hammer’s move from Upton Park saw a ground chalked off my list and put me back down to 58. Wanting to make this up as soon as possible an opening day fixture was a must, with the chosen destination being the Abbey Stadium.

The journey South West from the East Midlands was mostly painless. A couple of issues on the road threatened to throw a spanner in the works but all were expertly dealt by Google Maps. The ground is situated to the North East of the City Centre and is surrounded by plenty of street parking with no restrictions (that were visible), which is always nice a bonus when travelling by car.

As it will be known this season the Cambs Glass Stadium has a mostly traditional feel. The Newmarket Road End (North Terrace) where the most vocal United fans are housed sits behind the goal and is adorned with a Black ‘Amber Army’ slogan. Alongside this down the West side of the ground is the Habbin Stand, again all terraced. This was half opened and can be used to accommodate additional home/away fans if required dependant on the opposition. Despite a respectable 590 Bees fans in the away end there was far from a need for this to be used. Instead the away support was in the newest stand behind the other goal. The all seater Marston’s Smooth South Stand, built in 2002 is raised and set back from the pitch. From seeing this on Football League Tonight I was apprehensive of the view, however with it being raised despite being only midway up the stand the view was very good.

Finally, there is the Main Stand, currently known as the Mundipharma Community Stand. The style of the stand is my favourite type with its triangular shaped corrugated roofing supported underneath with a maze of symmetrically align stanchions. It has the look of a bygone era, steeped in history and nostalgia without giving off an air of obsolesce. 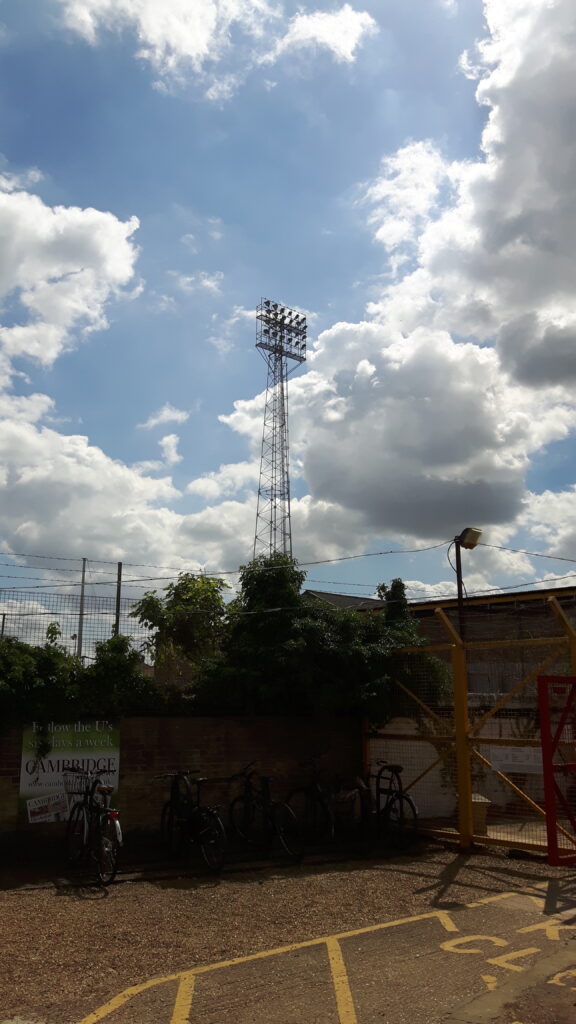 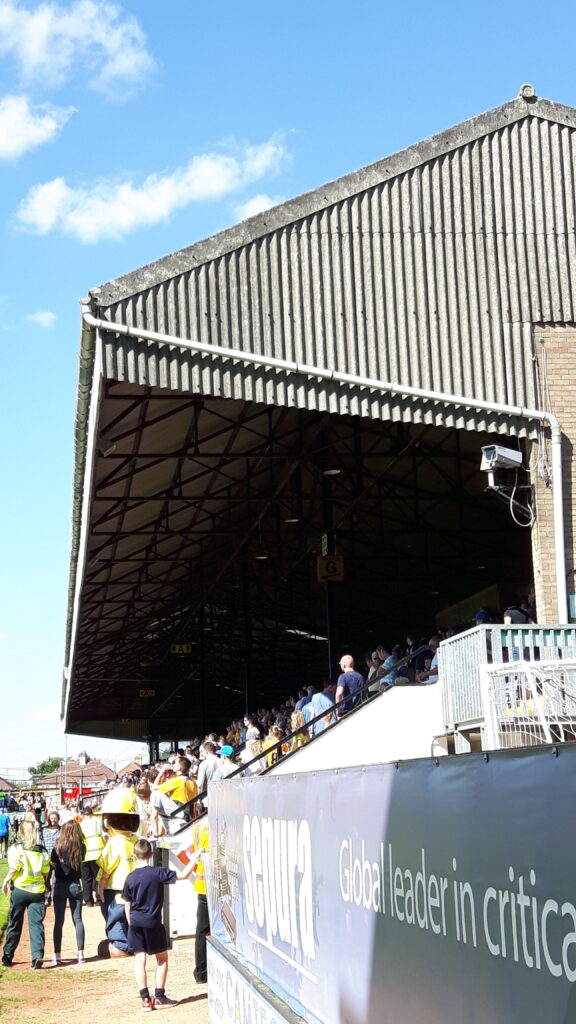 The opening day is largely an unknown for Football fans. The form book can’t go out of the window as it hasn’t been written yet. You could go off preseason, but if we did that Liverpool would win the treble (hope they aren’t famous last words!). Especially in the lower divisions of the Football League given that player turnover is so high nowadays there’s less insight than usual into how a game will go. My acca will prove testament to that with a ‘can’t do any worse’ score of 0/6.

The first half reflected this with neither side really gelling and getting going. As the half wore on Barnet probably shaded possession without doing anything meaningful with it. The home side had a couple of half chances but never seriously threatened. A free kick straight at the keeper tipped over and a snatched effort from striker Pigott high which went wide at the near post was the closest the U’s came.

Cambridge did start the second half with renewed vigour though as they saw more of the ball and raised the intensity. As Barnet had played themselves into the half they were made to pay. On the hour a corner was cleared and a swift counter attack saw Blair Adams’ low centre from the left flank slid into the roof of the net by debutant Piero Mingoia. This didn’t deter Martin Allen in the away dugout who brought on attacking duo Alex Nicholls and Jean-Louis Akpa Akpro and the pair duly delivered. The latter turned and drove well at the U’s defence being feeding Nicholls who cut in from the right side of the area and finished well. 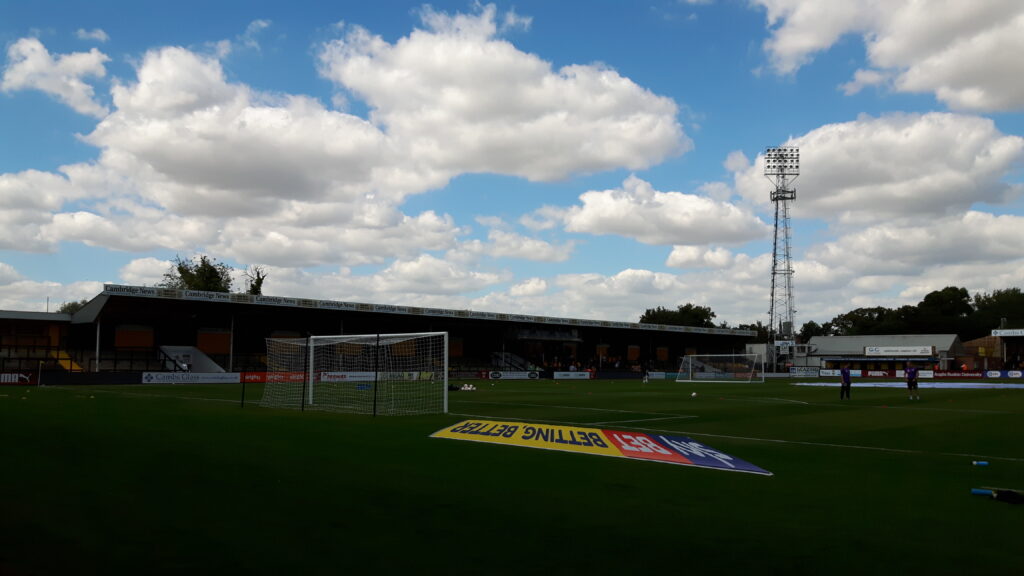 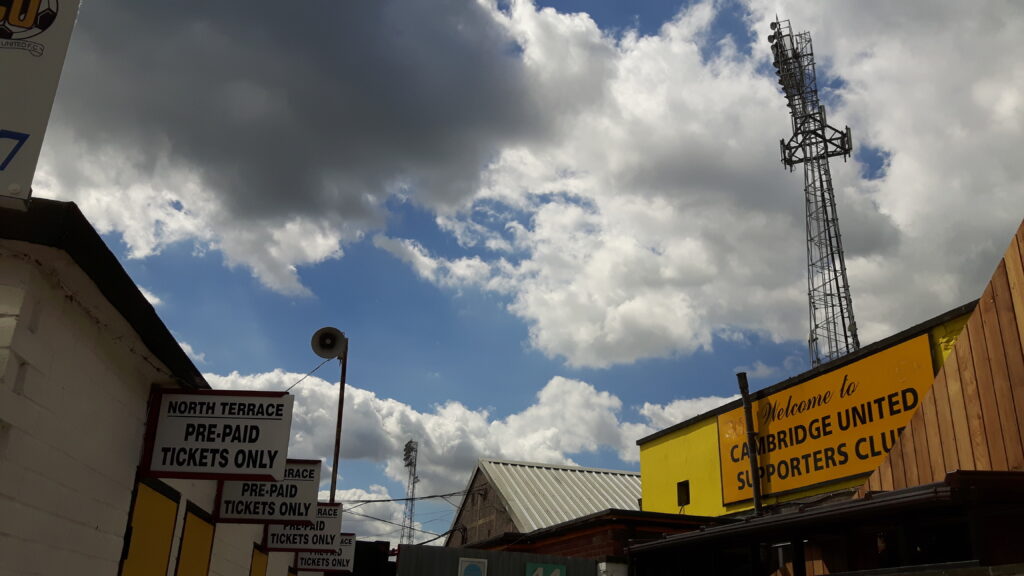 The Bees will probably feel they should have come away with all 3 points. On the break they had men over as Akpa Akpro ran deep into the opposition half again. This time though the big striker took the chance on himself and shot a tame effort straight at the keeper. On reflection a point was probably a fair result. 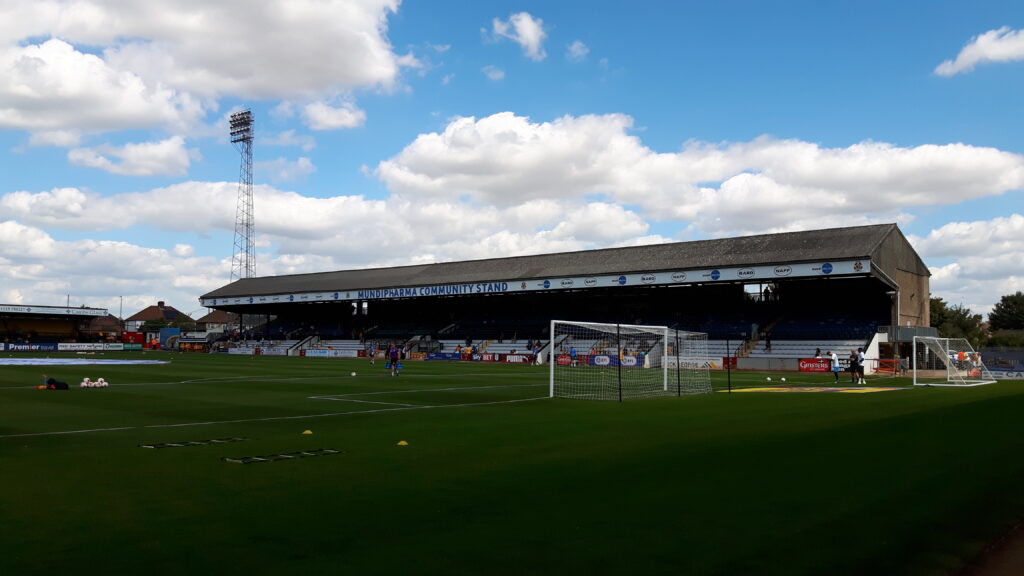 Atmosphere 2.5/5: Good at the stages, the first 15 and last half hour being the better. Had the away support been on the terrace next to the home fans it would have been a lot livelier.

Location 3.5/5: Easy to get to and plenty of free street parking.

Stewarding 4/5: All very friendly and welcoming aside from a single jobsworth who wouldn’t let me through the gate to take a photo of the back of the Main Stand.

You can keep up with Peter’s 92 on his the92.net profile.

Have you made the trip to the home of the Cambridge United? If yes you can add the Abbey Stadium to your 92 or if not plan your trip there: