Evertonian Bryan Cowin shares his advice on the Good of Goodison Park.

The home of Everton F.C. is located just 3 miles out of the city centre and is separated from their local rivals by only a park. It has been the home of The Toffee’s since 1892 after they were kicked out of Anfield over rent issues. Goodison is an old dilapidated stadium, and although has had improvements over the years it does need some more.
Goodison Park is the home of a few first’s, it was the first to have a scoreboard in England, to have dugouts in England, to have under soil heating in England, it has hosted the most top flight league games, the first league ground to host a F.A. Cup Final, the first ground where England lost on home soil and is the only club ground in the country to host a World Cup Semi-Final. 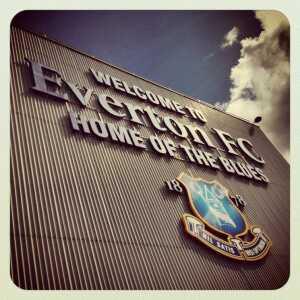 Most of the atmosphere is generated from the Gladwys Street end, although most of the stadium likes a sing-song. The away fans are housed in the Bullens Road Stand in two tiers at the corner of the ground, the stand is old, having been built in 1926 and some seats have obstructed views due to a pillar.

Where to eat and drink

Close to the ground there are many pubs and eateries, although I wouldn’t recommend drinking in many of them. The best place for away fans is Wetherspoons( Tom Frost’s) a walking distance from the ground, it’s a mix of both home and away support, if you would like food there are many take away places around the ground including McDonalds, kfc, subway.

In the city centre, it’s a different story; away fans are really welcome in many pubs. The Crown next to the train station is very good and a serves good food too. There is also a wetherspoons very close. 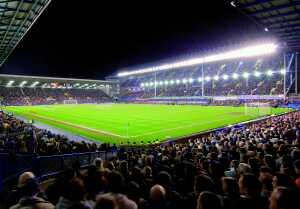 How to get there

You can’t park on the streets around the ground without a permit, but there are many car park’s around ranging from £3-8 for your stay.

There are two options if you get the train, option 1 is when you leave your train at Lime Street you can get another train from Central Station( its closed till October) to either Kirkdale or Sandhills. if you go to Kirkdale it is a 1 mile walk to the ground, if you get off at Sandhills you can get a shuttle bus service for an extra £1.50 return, this service runs 2 hours before and 1 hour after the game. Alternatively option 2 is to get a taxi from the city centre it generally costs £7.