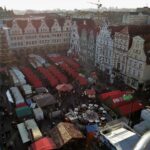 View of the Christmas Market from the big wheel in Rostock.

The ramifications of the fall of the Berlin Wall in November 1989 and subsequent reunification (Deutsche Einheit) of 1990 on East Germany are well covered, but the ripple through East German football, is a story not often told.

A journey recently took me to the Ostseestadion to see the last East German champions, Hansa Rostock, who won the 1991 competition, earning them a place in European competition, but more importantly, along with runners-up Dynamo Dresden, a place in the reunified Bundesliga for the 1991-1992 season. 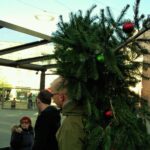 Somebody’s plus one invite wasn’t going to waste.

Hansa Rostock is the most consistent East German team to have existed in the reunified Bundesliga but now find themselves in the depths of the 3. Bundesliga. They are not the only East German team struggling since reunification. There have only been four representatives in the now 18 team league, with a total of 23 seasons between them:

With the relegation of FC Energie Cottbus in 2009, there has been no Bundesliga representation from the former communist state. There is clearly an in balance and with Hansa Rostock being the only mainstay in the Bundesliga, they have picked up a cult following from former East Germans, as being a symbol of representation in the reunified league. 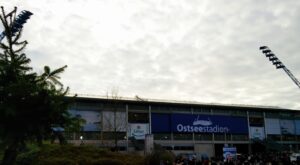 The Christmas Tree outside the Home of Hansa Rostock, the Ostseestadion.

Several of my comrades travelling to the Ostseestadion were raised in the DDR and became infected by the club, representing the east in the western dominated league, impressed and swayed by the longevity in the Bundesliga, however, the misfortune in recent years hasn’t stopped the club having ardent support. At 08:52 in Berlin, with a near 3-hour journey ahead, on the meandering regional train, the carriage was swarming with the blue and white of scarves, shirts and flags of Hansa Rostock. Just again, they play in the 3. Bundesliga.

Although the presence of an East German team in the Bundesliga might change in the next year, the candidate team is quite possibly the most hated, even more than Bayern München, in Germany. For a similar comparison think MK Dons. Let me please introduce to you, Rasen Ball Leipzig.

An east German team, SVV Markranstädt, who were languishing in the lower reaches of the Regional League system, had their licence purchased and were transformed and renamed into a marketing tool for Red Bull, who have broken transfer record after transfer record. Despite having made a hash of getting out of the second division last year, they look certain to gain promotion this year. The takeover of the city’s 42,000 capacity stadium was callous. It is also interesting that the stadium in Leipzig was the only one in East Germany to play host for the FIFA World Cup 2006, from the 12 host cities selected, but they didn’t host Germany. Germany is a nation of many wonderful stadiums, and the national team play across the country, but since reunification, have played 8 times in the former eastern territory. Kaiserslautern, a city in the west with less than 100,000 inhabitants, has hosted a similar amount of games. 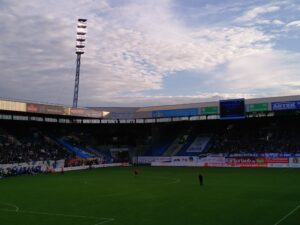 Despite enjoying a few beers on the journey, upon our arrival at Rostock station, we searched for more refreshing beer and some new fun to stretch our legs, heading to the traditional Christmas market. With the regular Saturday fixtures kicking off at 14:00 local time on a Saturday, we were soon in need of transporting ourselves to the stadium and after a traditional fish snack and the dubious acquisition of a Christmas tree, with baubles, we were on a tram to the stage of the game.

In the 80’s, East German football suffered from Stasi imposed control and match fixing to reach their aims of having a dominant team in the East German capital, Berlin. The dominant team of the 70’s, Dynamo Dresden, lost out to Dynamo Berlin, as the capital city club drew the best talent from other clubs, whilst also bolstering their academy, and then nurturing it, with good talent. Crowds and passion dwindled as a result of the predictable and controlled nature of the league. The Berlin outfits domestic success gave them a gateway to European football, and the ability to pit their wits against the best in Europe.  Of note, a penalty shoot-out win against Sir Alex Ferguson’s European Cup Winners Cup winners, Aberdeen, and despite the aggregate loss, home wins against eventual winners, Aston Villa in 1982 and Nottingham Forest in 1980. During this time, they only got to quarterfinals twice of European competition, despite  appearing in twelve consecutive years of European football including ten consecutive years in the European Cup. 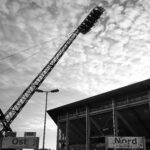 The iconic floodlights of the Ostseestadion.

We got into the stadium, but were a man down, the Christmas tree was, unfortunately, not allowed in with us. We grabbed a beer, in a plastic cup, and took our place in the Stadium, whilst we were behind the goal, the Ultra’s section was behind the other, and was bad boy raucous, scarves waved, voices raised. Although the Ultras were out in force, the rest of the compact and smart 30,000 stadium, with looming, magnificent, dominating, high unique floodlights, was sparsely filled. The opposition, Chemnitzer FC, also based in the old east, didn’t bring a crowd, but rather a dysfunctional mob, numbering around one to two hundred fans.

Following reunification and the restructuring of the Bundesliga to accommodate the East, there was subsequent turmoil in the transfer of players. The sudden change to adapt to the new capitalist system was too much, and the cash-rich clubs of the west were only too happy to plunder the best of the eastern talent, with the likes of Matthias Sammer, Andreas Thom and Thomas Doll moving west. The teams were already at a disadvantage, and with little support, were left to struggle with the forceful west. 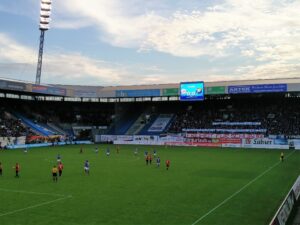 The game, on a cold winters day, was good and flowed back and forth, and for my first taste of the German third league, the technical standard was good and was comparable to good League One and high standing League Two standard. The game itself was settled by a stunning 25-meter half-volley with the outside of the boot, which I was sat perfectly behind as I initially thought it was heading wide, before bending back in, the keeper just getting a hand to it as it hit the net. The goal scored by Maik Baumgarten, of Hansa Rostock, caused the stadium erupted, and the ultras terrace became a bustling sight to behold. The rest of the game was controlled by Hansa Rostock, a goal from Hansa Rostock dubiously disallowed for a foul on a defender, and later a small dispute between players after a clash of heads. The game fizzled out, as I nursed my beer, the hands holding the beer becoming colder as the day and game were fading out to see Hansa Rostock to victory. 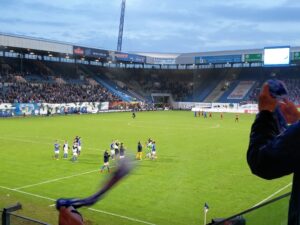 Applauding the fans at the end.

The three points were a boost for Hansa Rostock before the start of the month-long winter break, Hansa Rostock is floundering at the wrong end of the 3. Liga and the points pushed them out of the relegation places.The thought that the once most successful team from the east could be relegated from the national system is a sign of the problems facing the eastern teams, 25 years after reunification. It is also worth recognising that from the 23 strong Germany squad that won the FIFA World Cup 2014, only one, Toni Kroos, was born in the eastern part of the country.

As I left the impressive Ostseestadion, I couldn’t help but feel the injustice of the situation that had arisen. This team was well supported, had a strong following, and had battled to retain its place in the Bundesliga, but history and predicament had been unkind, and now Hansa Rostock was battling further, to save them self in the National league system.

Editors Note: This article has since been updated, due to information regarding the movement of players between Dynamo Dresden and Dynamo Berlin in the later parts of the 70’s. This has now been corrected, and I would like to thank Steve Winkler for observing this oversight.