Blogger and the92.net co-founder Pete was in good company heading down to Gloucestershire. The New Lawn was the venue as Forest Green Rovers playing their first game in the Football League.

In what is fast becoming a family a ritual my Dad and I looked for a new ground we could tick off on the opening day of the season. With him based on the South coast and myself in the East Midlands we examined the fixture list for a convenient meeting point; this year’s destination would be the New Lawn.

A popular choice with many-a ground hopper including many from the92.net, as Forest Green Rovers played their first match as part of the 92. 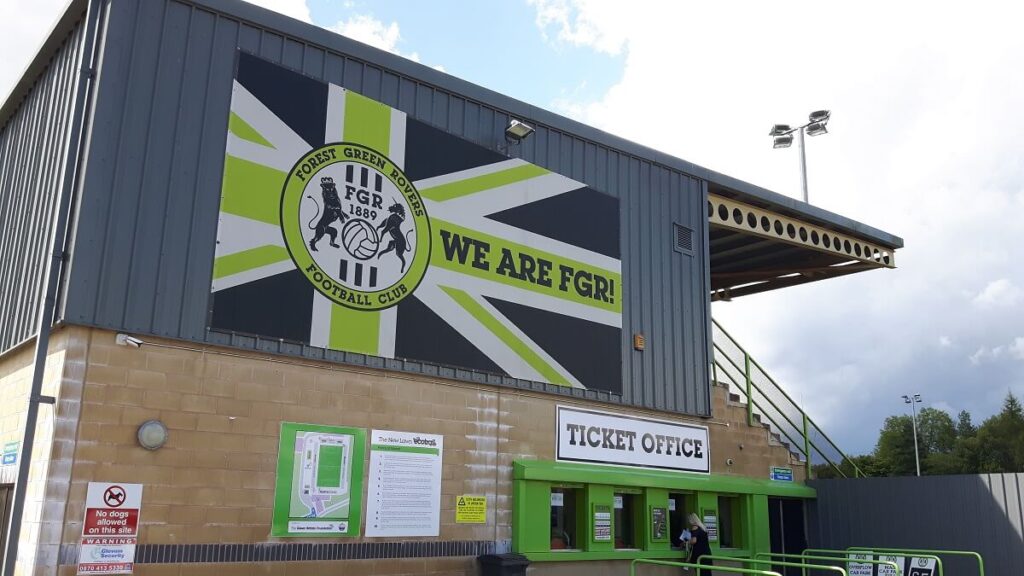 Leaving in plenty of time the journey down for me along the M5 was a breeze. Trusting in Google Maps I was guided through a number of single track country lanes until I reached the ground. Approaching a ground in such a rural location was rather surreal but refreshing, I can’t recall a similar journey to watch a professional game. That is hardly surprising though given Nailsworth, the parish where Rovers are based, has a population around the 6000 mark.

Speaking to others at the ground access by public transport wasn’t quite so straight forward. The closest train station with travel links to the stadium is Stroud. From there the bus takes around half an hour to do the 5-mile journey.

Arriving early parking was fine. There’s plenty of free street parking down one side of Nortonwood (road), which is just off the roundabout as you approach the ground. The further down Nortonwood you go the longer and steeper the walk to the ground, but it’s no more than 10-15 mins max. Alternatively you can park at the ground or a field opposite for £5.

The New Lawn, which lives on ‘Another Way’ is a modern ground having opened in 2006. Despite its infancy in ground terms this hasn’t stopped owner Dale Vince ‘thinking big’ drawing up plans for an all new wooden stadium! Rovers current home is made up for a covered terrace behind each goal, with neither spanning from corner flag to corner flag. To the East of the ground is the smart all-seater Main Stand. Opposite this is an open terrace, consisting of 5-6 rows where the away support is based. The away support used to be behind one of the goals, but had been moved. This was unusual as it meant that there was now no seated offering for visiting supporters; something a steward said the club had a fixed amount of time to resolve.

The away section was where we were to be based given my old man’s Barnet connections. When buying the tickets, we’d imagined packing the sun cream, but the forecast on the morning of the game told another story; heavy rain, thunder and lightning! The storm arrived shortly after midday.

Stranded in the car unfortunately it meant we forfeited a trip to the club bar. With pack-a-macs at the ready, thankfully by quarter past 2 it had passed and the rest of afternoon was sunny other than a few suspicious looking clouds; que chants of “it’s gonna rain in the minute” from the home terrace. 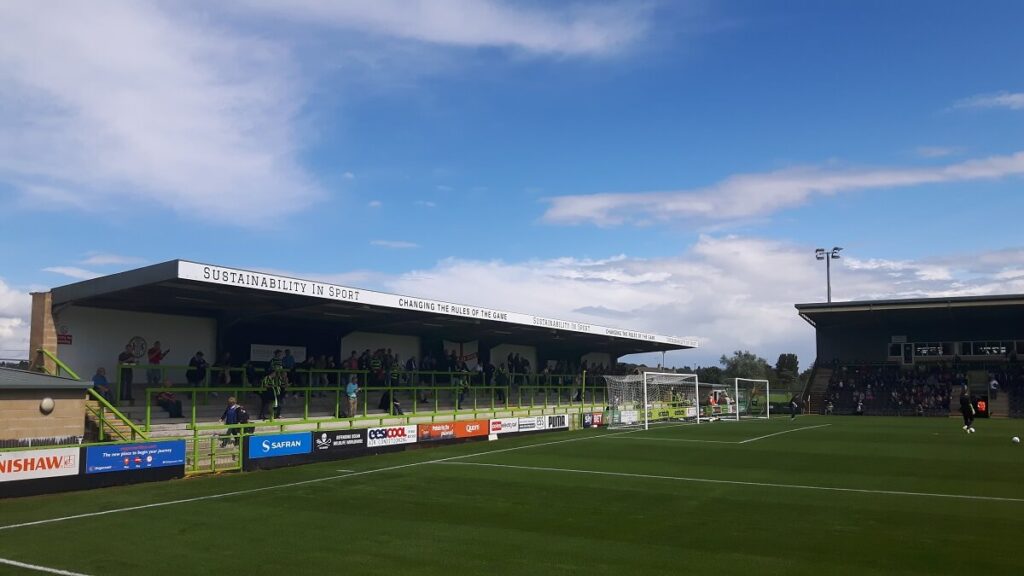 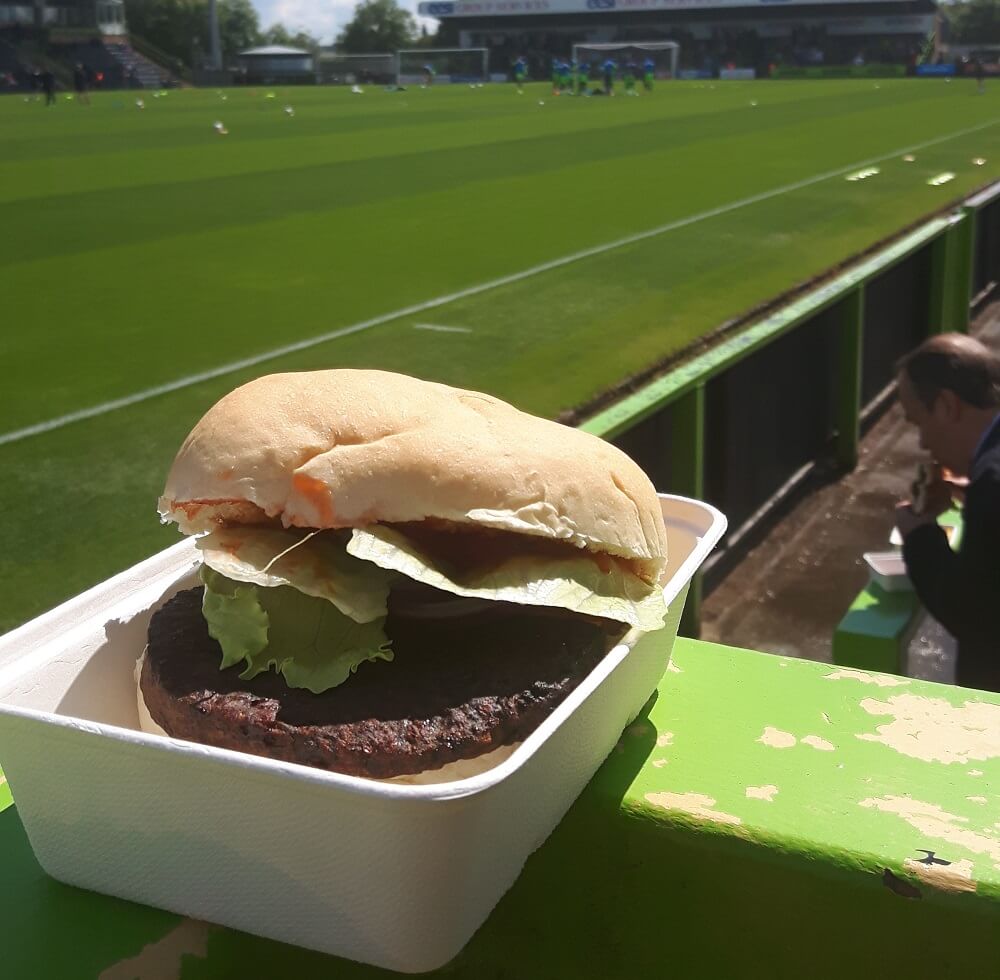 The catering offering at the New Lawn has been much publicised due to the clubs’ vegan stance. Yes, that’s right no meat! As I’m sure a few did, I spoke to a groundhopper from North-Yorkshire who went through the turnstiles armed with a 4 pack of pork pies. “No one’s keeping me from me meat” he said. Keen to sample the local snap I refrained from smuggling in a meat-filled alternative to give the vegan offering a try.

I think choice may be more limited in the away end than the home, but it boiled down to a choice of Veggie burger or Quorn pie. I went for the former, which came in the traditional bun plus a generous dressing of salad and relish. I thought the taste was good, nothing special but good. Being vegan milk was off the menu too, with many-a North Londoner looking quizzically at ‘strange’ cartoons of alternatives.

Game time: history is made

For the majority of the first half it was an even affair with both sides having a couple of chances. Forest Green with shots, one of which just whistled past the post from Cooper. The Bees preferred the aerial route with Coulthirst and Akpa-Akpro both going close with headers.

After the 40-minute mark though the game swung dramatically towards the hosts. Barnet’s centre half Charlie Clough, signed from Forest Green in January had to go off for treatment following a clash of heads. While he was off the field Rovers won themselves a corner, from which Christian Doidge headed home. 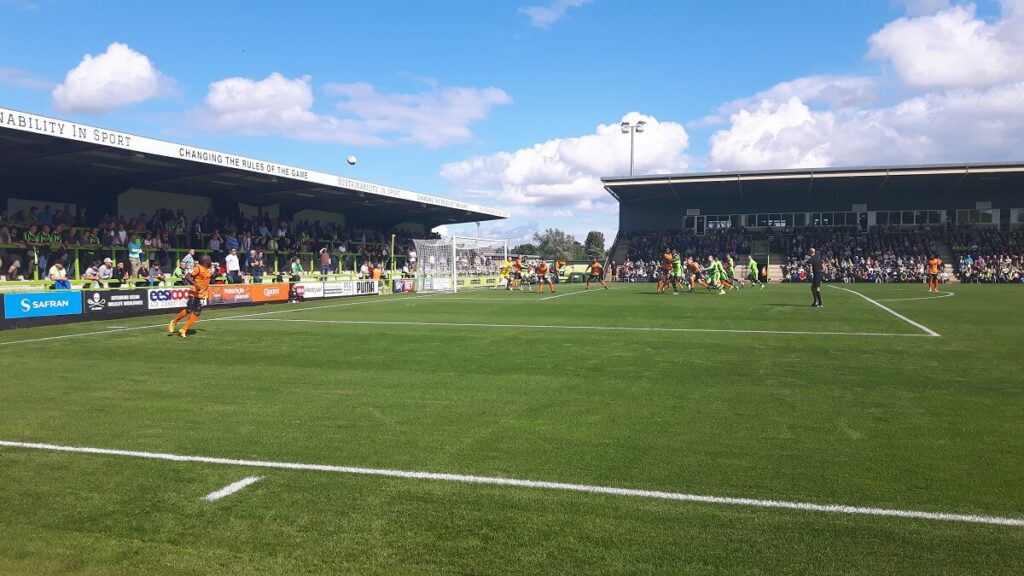 And the striker who bagged 27 goals in the National League last season was soon at it again. Just 2 minutes later he spun a dazed Clough under a high ball before coolly lobbing Stephens in the Barnet goal. “Not bad for a Village team” came the call from the home terrace. It was a hapless return for the bandage headed Clough who was duly withdrawn from the action at the interval. 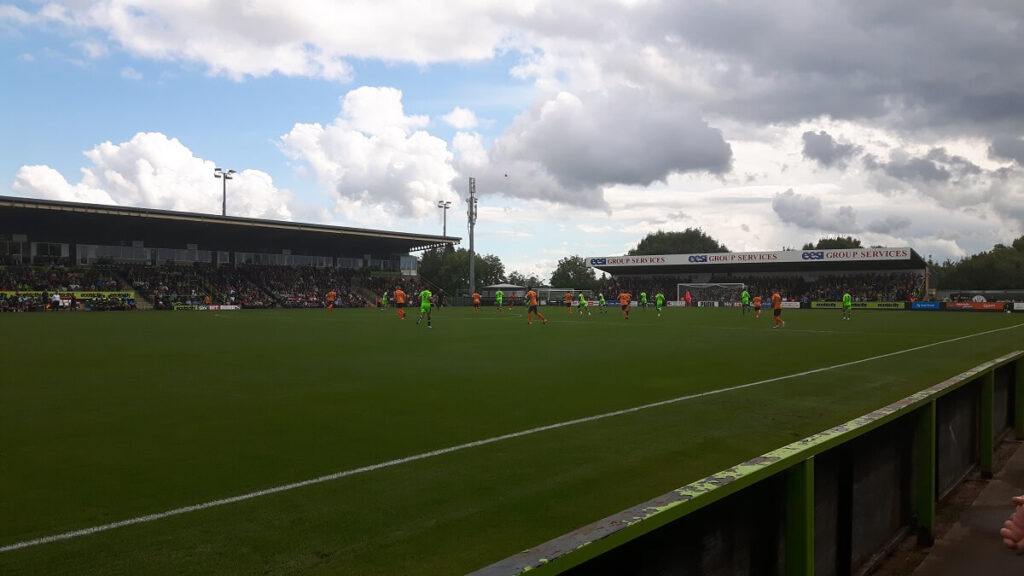 The classic “a game of 2 halves”

The Bees brought on centre backs experienced player-coach Michael Nelson and David Tutonda to start the second half. This signalled a change of shape for the visitors as they switched to 3 at the back. This completely changed the game.

From the off Barnet were in control. Clean through, debutant striker Coulthirst should have scored. But he unselfishly squared for the onrushing Akpa-Akpro who was millimetres away from sliding the ball into an open net. It was a glorious chance spurned, but a sign of things to come.

On 58 the lively Jamal Campbell-Ryce was played neatly into the area. It looked like his touch had taken him too wide, but he managed to loop a cross over to the far post. This time Akpa-Akpro was able to get there heading home. 5 minutes later and Campbell-Ryce got his goal to level proceedings. His low shot from 20 yards looked to be tame and going wide. However, this was deceiving from our angle as it crept expertly in off the far post. 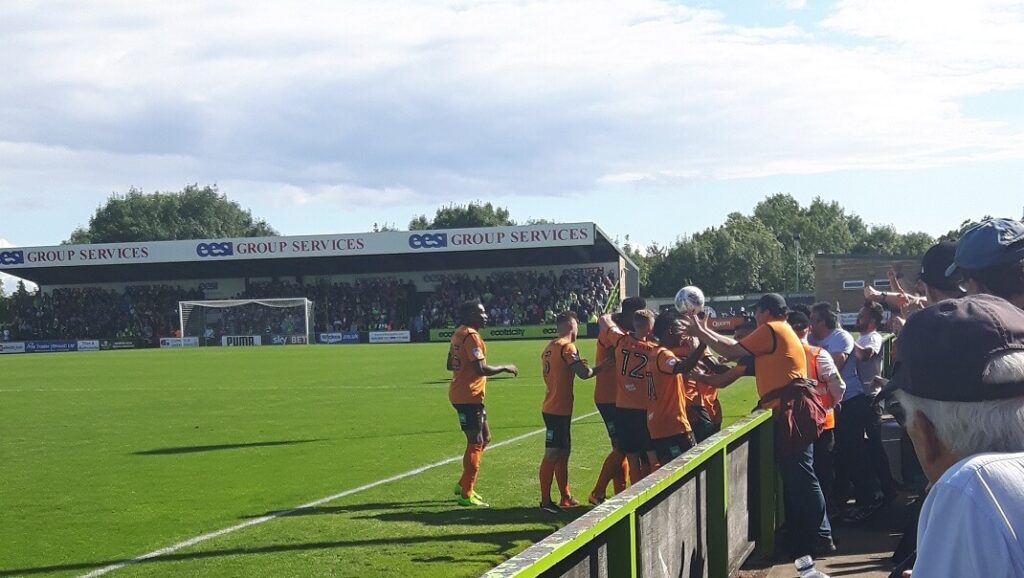 The remainder of the game went back to being even. The visitors probably had the better of the play but neither side had a clear-cut chance to win it. There was a sting in the tail for the Bees right at the death as Jack Taylor picked up a second yellow card deep into stoppage time, but there wasn’t enough time for the home side to try and take advantage.

Honours even then in a classic game of 2 halves. Barnet will naturally have been delighted to pick up a point after a very poor first half. So poor in fact that I saw 5 disgruntled away fans leave at the break! As Forest Green manager Mark Cooper said post-match, they will need to learn to manage games better at this level and quickly.

Atmosphere 1.5/5: A couple of chants from one of the home terraces. With the away end being so narrow, long and uncovered it was very difficult to get any chants going, although “the referee’s a vegan” from a few lads got a good laugh!

Chant of the day yesterday from the #BarnetFC fans at #FGR "the referee's a vegan" 😂 pic.twitter.com/YUAghGB4Vz

Location 4/5: I’m sure many others will think the opposite to this, however I enjoyed the rural setting.

Value for money 3.5/5: £16 for a ticket on a terrace is good for Football League. The Veggie Burger was par for the course, however £4 for a programme is too much.

Programme 2/5: Pretty standard offering and as mentioned above £4 for the privilege. Quality wasn’t great either with finger marks taking print off the cover. Many were left disappointed as with a rumoured print run of just 900, programmes were sold out an hour before kick-off.

Lot of disappointed fans and groundhoppers at the New Lawn today…#FGR only did a run of 900 programmes…sold out by 14:00 (£4 a pop too!) pic.twitter.com/ACwrcftSEa

Character 3/5: A ground with 3 sides of terracing is good in my book.

Stewarding 5/5: Chatty, friendly and a good sense of humour.

Overall 3/5: All in all a great start to season with an entertaining game and a match day experience with some very unique touches.

Have you made the trip to the home of Forest Green Rovers? If yes, you can tick the New Lawn off your 92 grounds checklist or if not plan your trip there: