Blogger Peter Briers made the trip to pie country, Lancashire, to the home of Wigan Athletic. Struggling Swindon were the visitors as they looked to turn around their poor start to the season.

Wigan is a ground that has been near the top of my list to tick off doing the 92 grounds for a couple of years now, I just hadn’t got round to getting there. With it not being a problem to get a ticket there and a free Saturday afternoon now was my chance. As with most new grounds the design of the ground was decent. The stands, all single tier, were fairly steep and provided a fantastic viewpoint from wherever you chose to sit. Despite the corners of the ground not being filled in, the ends of the stands, particularly those behind the goal came right in to almost close out the corners and keep the noise it. For a ground that was around a third full the atmosphere was really good at times, something I didn’t expect from a sparse crowd.

For me Lancashire has always been stereotypically synonymous with pies, so ‘when in Rome…‘ I had to sample. From previous pie debates on Twitter I’d learnt inside the ground the club now served a mass produced and much poorer quality pastry treat than some of the more traditional locally made offerings. After numerous recommendations on Twitter I had to go for the latter and more specifically from a Galloways – a Wigan based bakery. I was not disappointed! My weapon of choice Chunky Steak (possibly with an accompanying sausage roll). I won’t go in to great detail about the favour and textures of the pastry, despite clichés from ‘Bake off’ springing to mind (the mrs watches it honestly!) – just look for yourself. There are plenty of Galloways shops in the town and I would thoroughly recommend you stop by on your way to the ground. Head to Galloways bakers website or search near by on Google Maps to see where they are. 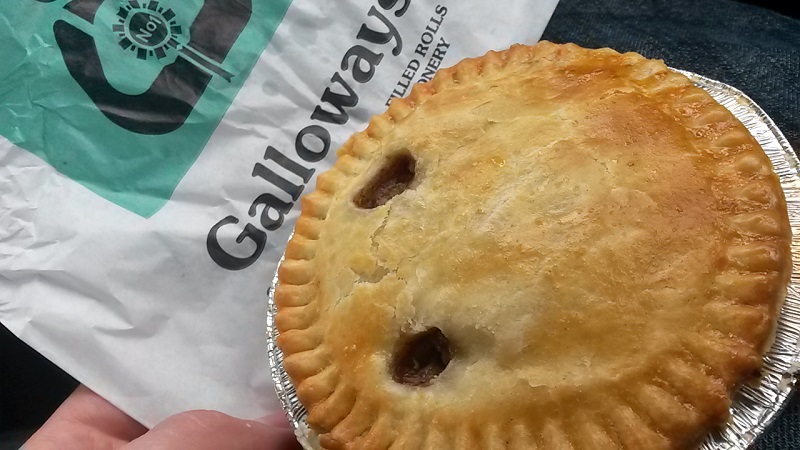 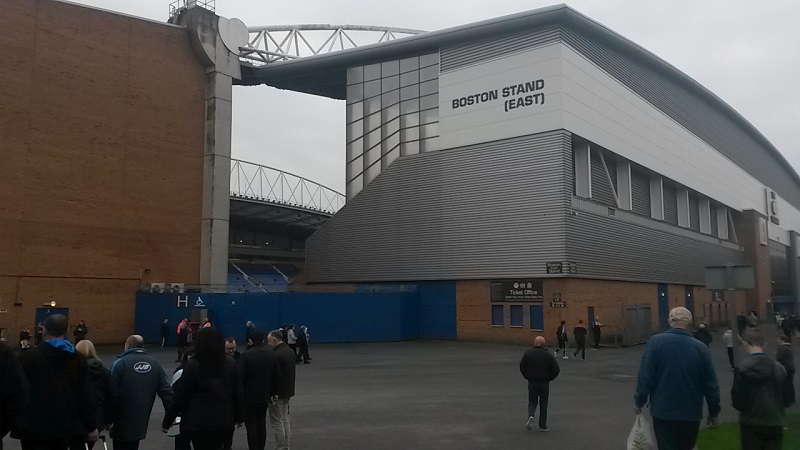 Wigan versus Swindon brought together 2 of the more unusual current club set-ups out of the 92. The home side, off the back of relegation from the Championship were looking to rebuild under former player Gary Caldwell. The stopper took the reins in April 2015, too late to prevent the side going down and finds himself in management at the age of just 33 after having to retire early through injury. In the boardroom at the DW Stadium after Dave Whelan stepped down he replaced himself with his grandson, David Sharpe, who was just 23 at the time. Now 24 he is trying to recreate his grandfathers legacy and get the Latics back to the Premier League.

In the boardroom at the County Ground, Swindon there have been more recent goings on. After a poor start to the season Town parted company with Mark Cooper and until a replacement can be found chairman Lee Power has taken temporary charge. Power has been in caretaker charge in a previous role and has played the game at a professional level, however being registered outside the UK he can only be in the country a certain number of days per year so needs to get a shift on in his quest to appoint a new man. 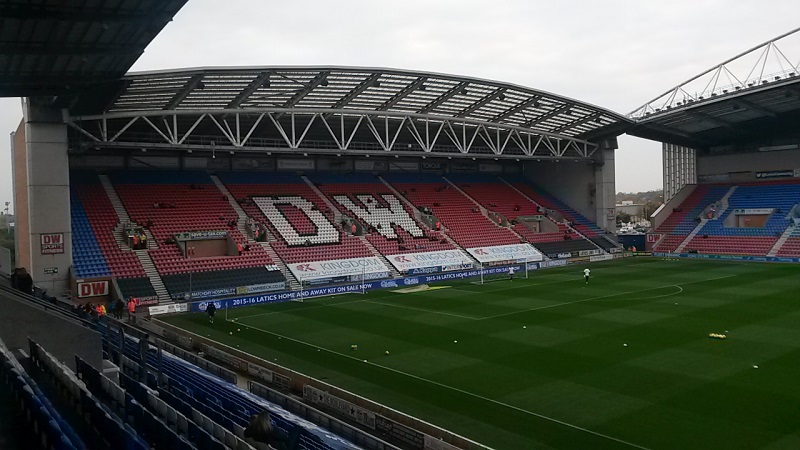 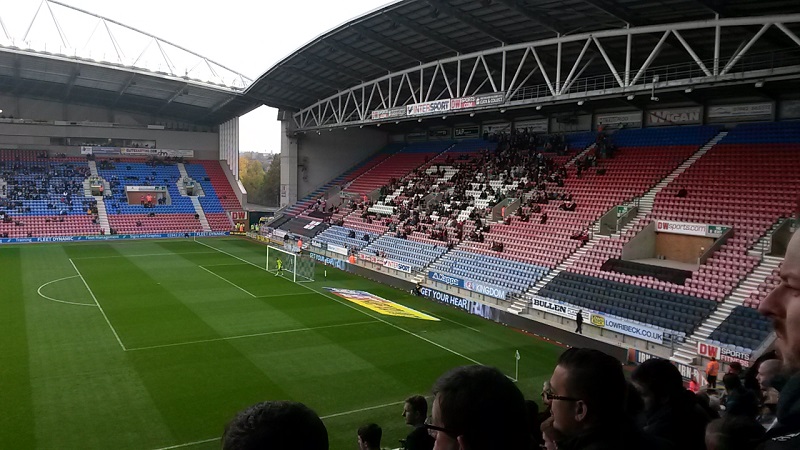 The game got off a rip roaring start with Wigan coming flying out of the blocks, for the first 4 minutes at least! The were all over Swindon like a rash and could and probably should have taken the lead when the ball flashed across the 6 yard line. When the visitors eventually got the ball they showed they could be threat. A slick counter attacking move saw Anton Rodgers, son of Brendon, sky a glorious chance high and wide. This served as a warning to Wigan who took stock after this and the game settled down as the visitors looked to play out from the back but get 10 men behind the ball as soon as they lost it. They did have the best chance of the first half for me – another counter attack saw Gladwin bend a shot past Jääskeläinen but saw it canon back off the post.

The second half continued in a similar vein. Wigan were playing an odd formation with 3 at the back but just 1 out and out striker with Jacobs supporting Grigg. Often when they got into good positions out wide it was just Grigg in the middle up against 3-4 Robins defenders, a battle he was never going to win. With 20 minutes to play Caldwell did what many in the ground thought was needed much earlier and threw on Craig Davies to go 2 up top. The change made an effect at they looked more dangerous with the visiting defenders having a lot more to cope with. This did lead to a few gaps for Swindon to exploit but they had neither the legs or the quality to take advantage. 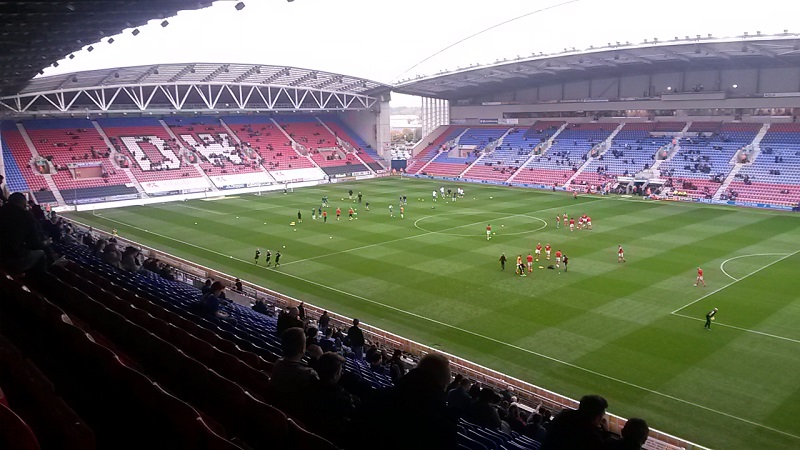 It seemed the home side needed that one big chance to snatch the points which duly arrived. Full back Reece James arriving late in the box saw his first effort well saved and proceeded to balloon the rebound over the bar. With that it looked like the game was done. However deep into what I think was 6 minutes of injury time, due to the visitors time wasting tactics in particular from Swindon keeper Vigouroux the home side bagged the points. Said keeper spilt a cross from Davies and substitute Francisco Júnior, on loan from Everton poked home.

Atmosphere 2.5/5: Good in stages but crowd grew frustrated as the game became quite disjointed in periods.

Location 4/5: Easy to find and plenty of street parking in nearby residential area 10-15 minutes walk from the ground.

Value for money 4/5: £20 for an adult ticket anywhere in the ground is decent in my book nowadays. Admittedly the ground was only a third full but a paid £24 for Notts County a fortnight ago, who are a league below and in a similar ground to crowd ratio.

Pie Rating and Pint Rating n/a Not sampled, but as mentioned previously a trip to a Galloways en route is a must!

Character 3/5: Like the way the ground is fairly enclosed despite not having the corners filled in.

Stewarding 5/5: Seen and not heard.

You can keep up with Peter’s 92 on his the92.net profile here. Have you been to the DW Stadium before? Add it to your 92 here www.the92.net/grounds or plan your trip using our away day planner here www.the92.net/plan-your-away-day/.