It was well and truly a season to remember for Helen Cator as at the second attempt she ticked the final ground off her list and her beloved Foxes achieved promotion back to the Premier League after a long absence. An elated Helen spoke to the Groundsman about her journey.

Groundsman: Firstly congratulations on completing the 92! Which was your final ground and did you commemorate the occasion?

Helen: Thank you, my final ground saw me off to Plainmoor to see Torquay a ground I attempted to visit as my 91st in January so I could finish at Bournemouth watching Leicester as my 92 the floods had other ideas and the game was rained off 100 miles into my journey!

The quackers duck collection as it stands!

I marked completing the 92 with the presentation of a jumper from my parents and the following day I had a giant duck signed by all the Leicester players presented to me by city hero Steve Walsh 🙂 another surprise my parents arranged! I suppose the duck story needs explanation … I collect rubber bath ducks on my journeys to the football grounds well the grounds that sell them anyway I then name them after a player who has played for both Leicester and the club and where possible get them signed!!

Helen: My first ground saw me watch my beloved foxes at Filbert Street in 1999 at the age of eleven!
Although this is obviously now not part of the current 92 but I have watched many games at the King Power stadium since!

Helen: Oooo tricky question how can I possibly pick just one – Arsenal has to be up there for the impressive stadium (although I’m not supposed to say that my dads a spurs fan) Southend will always be a ground I’ll remember fondly as it saw Leicester clinch promotion and the league one title. 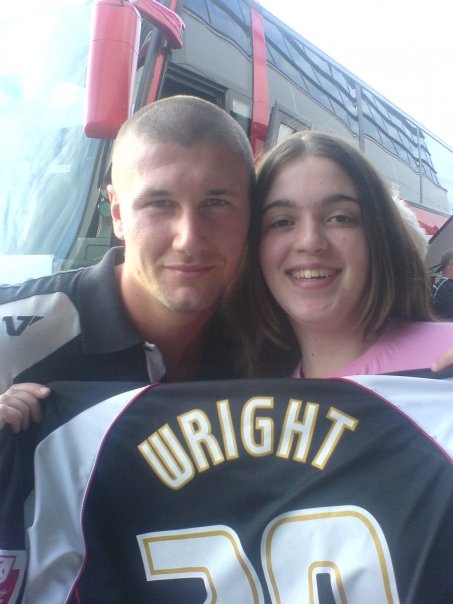 Receiving Tommy wrights shirt at MK dons back in 2007 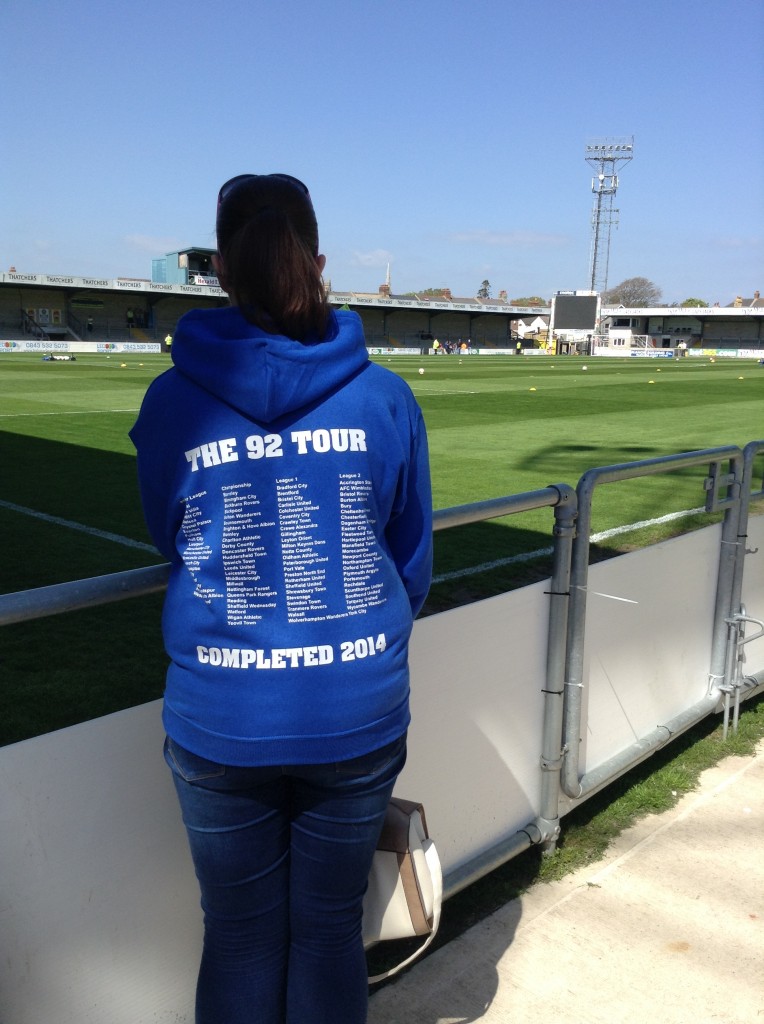 Helen at her final ground in her new 92 tour jumper

Helen: Stoke is easily my least favourite ground not only did I witness the foxes relegated from the premiership at The Britannia it is a venue I always find an intimidating place to be an away fan at!

Helen: The many hours traveling the length of the journey on trains and in the car, meeting many mascots for photographs along the way, the final game at Filbert street, hearing the Kop sing you will never walk alone at Anfield at a midweek December night game under the floodlights, adventures with my mum, friends and alone to Carlisle! I also received the match worn shirt of my favourite footballer at MK Dons a moment I will never forget!

GM: Finally, as we all know the 92 can sometimes only last a season if relegations from League 2 and promotions from the Conference go against you, how are this seasons ups and downs looking like they’ll affect your 92?

Helen: The conference promotions this year leave me needing to make a definite visit to Luton and either Gateshead Cambridge Grimsby or Halifax next season depending on play off winners!

A big thank you to Helen for taking the time to speak to us about joining the 92 club. You can keep up with Helen and her groundhopping exploits on twitter @HellzC123