We catch up with groundhopper and now 92 club member Stuart Markley to hear about his experiences doing the 92 league grounds.

Groundsman: Firstly congratulations on completing the 92! Which was your final ground and did you commemorate the occasion?
Stuart: The final ground was Gresty Road, Crewe Alexandra, on a very blustery and wet Tuesday night on 21st October, 2014. I brought three mates along and we decided to stay over and enjoy the local nightlife! This consisted of pub, Chinese, game, pub, more pub, well you get the idea…

Groundsman: What was the first ground you ticked off your list?
Stuart: Peterborough United, many years ago.

Groundsman: Which ground was your favourite overall over the course of the journey?
Stuart: There are really too many good grounds and local supporters to pick out one but generally I have enjoyed the lower league grounds better due to the atmosphere created by the smaller setting and the commitment of the players especially on nights such as Tuesday. 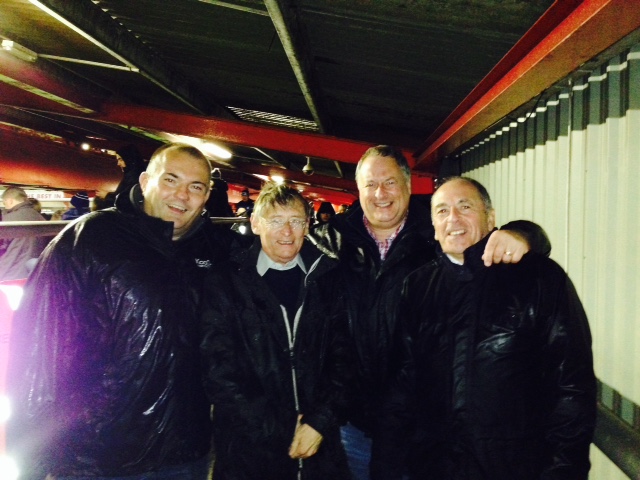 Stuart (3rd from left) and brother (right) at Gresty Road

Groundsman: And your least favourite?
Stuart: Although impressive structures I haven’t enjoyed the purpose built newer grounds with shops, hotels, out of town locations etc, but that’s the way of modern football.

Groundsman: What are the lasting memories of your travels?
Stuart: The local supporters, mixing together at the smaller grounds and in their club facilities. One of my best was my memorable four days was at the time of the Wills and Kate royal wedding. Wanting to escape the whole event I did four grounds in four days from the four different divisions. I spent the royal wedding down a cave and completely on my own at a pub on Torquay sea front for about 3 hours. In the evening I attended Torquay v Chesterfield, the next day Rochdale v Peterborough, followed by Manchester City v West Ham and finally Cardiff v Middlesbrough!

Groundsman: Finally, as we all know the 92 can sometimes only last a season if relegations for League 2 and promotions from the Blue Square go against you, in an ideal world who would be your 2 to up and down at the end of the season.
Stuart: I think Halifax and Gateshead to go up, it seems easier to drive North than South and I don’t mind who comes down.

Thanks to Stuart for sharing his experiences. If you’re doing the 92 league grounds create your 92, keep track as well as rate and the review the grounds as you go FREE right here www.the92.net/register 🙂 If you are on the journey let us help you on your way with our away day planner.