With the clubs plans for the new stadium given the final thumbs up we speak to avid Brentford fan Rhys Williams about the move and leaving the iconic Griffin Park.

Groundsman: You’ve recently received the final go ahead for the new stadium, are you excited about the move?

Rhys: Absolutely, moving to the new stadium is vital to securing the long term future of the football club and providing the club with the facilities it needs to go on and be more successful. I believe the new stadium could usher in a new period in the clubs history where most of our football will be played in the top two divisions rather than the bottom two.

Many new grounds have been unpopular with supporters because they end up being dull, identikit match boxes on open land on the outskirts of the towns they represent with more empty seats than supporters and no atmosphere. Lionel Road however will be different; the club will still be in the heart of Brentford, less than a mile down the road as the centrepiece of a regenerations project delivering new homes and facilities which should really rejuvenate the whole area. 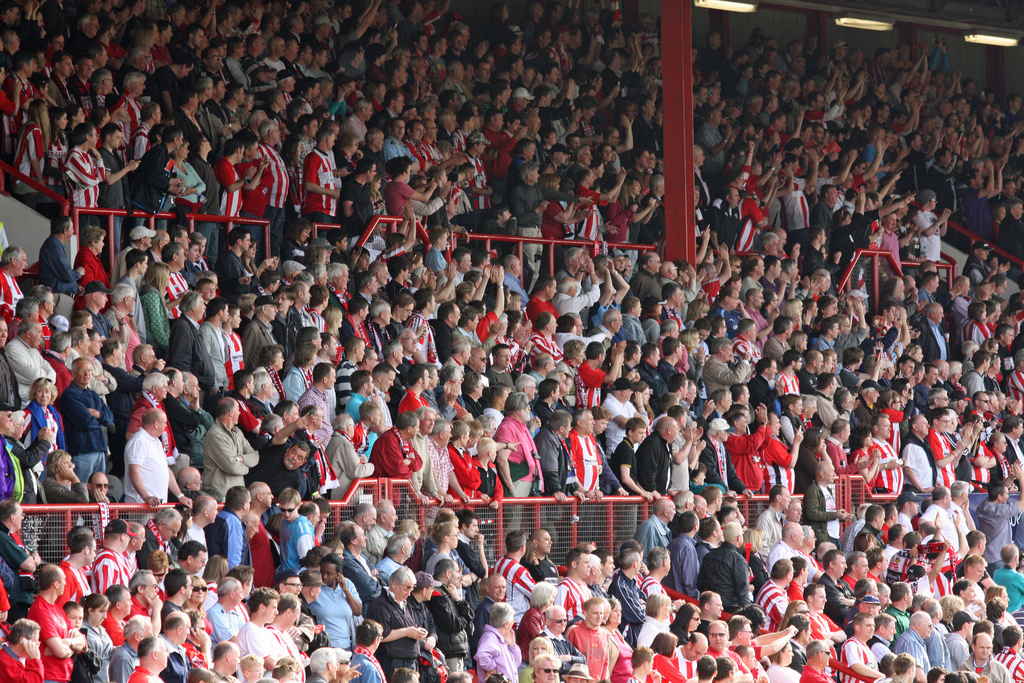 Because the site is challenging (we are effectively squeezing a rectangular stadium into a triangular piece of land) the stadium design has had to be quite innovative and from the plans we’ve seen will looks more interesting than most new grounds. I also think 20,000 is the right size for us, we’re averaging around 8,000 this season and I think that can only increase with Championship football and the new stadium itself drawing new interest and supporters to the club. I’m also confident Bees fans will bring the atmosphere we have at Griffin Park with them to our new home.

GM: How do you feel about the club moving from Griffin Park?

Rhys: Like all Brentford fans I love Griffin Park, it’s my home from home. It’s a ramshackle old ground with real character and there is nowhere I’d rather be on a Saturday afternoon than standing on the Ealing Road Terrace alongside fellow bees. Unfortunately however its old-fashioned charm is also its greatest weakness. With little in the way of facilities for generating extra revenue, crap toilets, poor catering, view-obstructing pillars and no leg room, Griffin Park is very much an acquired taste savoured only by us die-hards. As much as we will miss the old place when it’s gone, mourn its passing and cherish our memories of it, I suspect few will wish we hadn’t moved once we get into our new stadium.

GM: Griffin Park is extremely popular with away fans, a pub in every corner being a particular favourite – what will you miss most?

Rhys: We won’t miss the pubs too much as Brentford fans will continue to drink in the same places they do now when we move as the new ground will be only 10 minutes walk away, though of course it’s a shame we can’t just pick them up and bring them with us! I will miss standing on the Ealing Road the most, I will miss being squashed intimately close with fellow bees and jumping around going mental after important goals and ending up stood in a completely different place next to people I don’t know. It’s amazing how sentimental I can feel towards a lump of stepped concrete. Hopefully the new ground we hope will have safe standing once the Government changes the laws in that area, but I accept even then it won’t quite be the same. 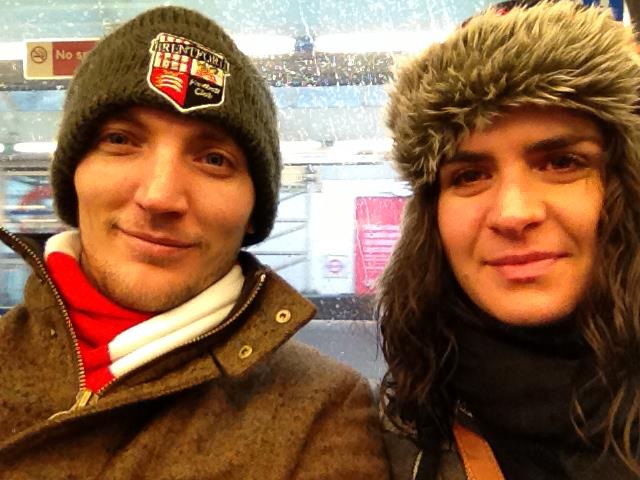 GM: What will be your lasting memory of Griffin Park?

Rhys: That’s a tough one, hard to pick one memory or one thing about the ground over all the others. Oddly I’m going to go for the floodlights; those old pylons must be some of the only ones of their age and type left in the country. I have many memories of seeing the lights when travelling in for games and feeling my anticipation rising, and relief at knowing we were almost there and not going to miss kick off. I always keep an eye out for the floodlights when I’m in the area and it’s always a pleasure to see them.

One of my earliest defining memories of Griffin Park involves that terrace again. I’d started going to matches after Christmas in 1996/7 with my Dad, and it was miserable: I don’t think I saw a home win or a home goal in my first four months of going and I was in despair. The club were top when we started going and slumped down to fourth by the end of the season. Then to my amazement we beat Bristol City in both legs of the playoff. In the second leg at Griffin Park we came from 1-0 down to win 2-1. When Bob Taylor scored the second I remember there was total pandemonium and I had my first experience of being hugged by random strangers. I knew then that Brentford would be for life.

Of course that season ended badly as have many other in our numerous attempts to get promoted out of League 1. My lasting memories of Griffin Park have just happened with our first promotion from this league that I have witnessed and Championship football coming to Griffin Park in its final years – that would be a fitting send off for this old ground. 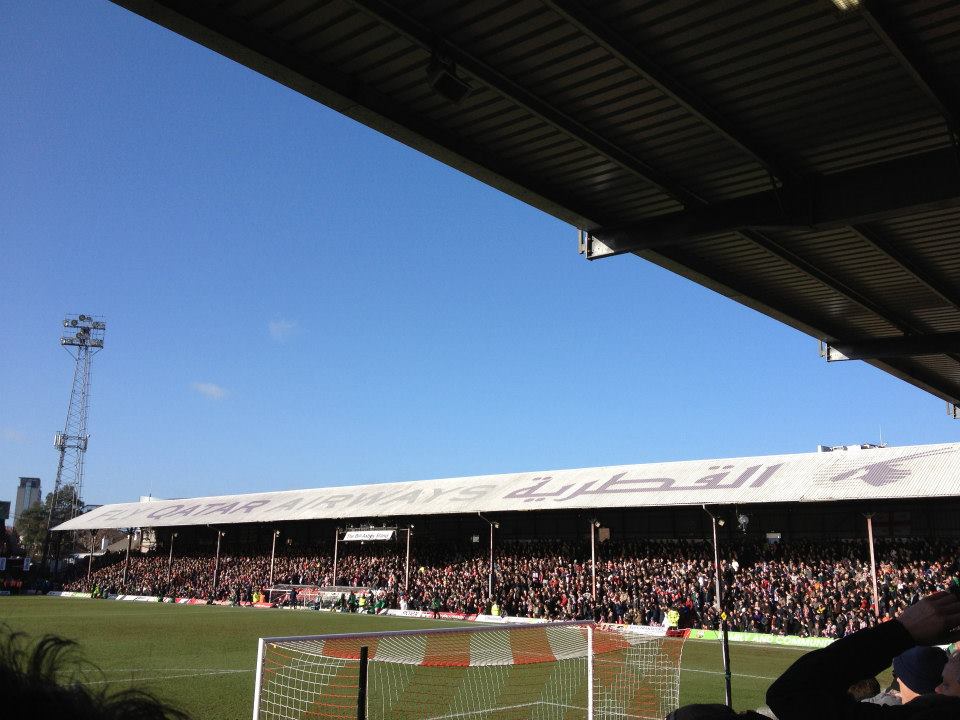 GM: It will be sad to lose a ground of the 92 with so much character, but it good to see the new plans are a bit different from a lot of new build – what do you think of the plans?

Rhys: As I said before I really like the plans for the new ground. I’m sure the benefits, for the club as well as paying supporters will far outweigh any negatives. I think it looks like it will be compact with the fans right on top of the pitch and I know getting the acoustics right has been a major priority for the fans which has been taken on board by the planners. If both these aspects are right and you can get the same intimate/intimidating atmosphere at the new ground as we have at Griffin Park then I will be very happy.

Rhys: I think this year I’ve reached 46, so exactly half of them.

GM: With promotion in the bag which new grounds will you be looking to cross off your list next season?

Rhys: All of em! Obviously we’d love to play QPR & Fulham so if both of them could botch up their seasons for us that would be great. Add in (hopefully) Millwall, Charlton, Watford, Reading, Brighton, Bournemouth and it’s an excellent season to be a Brentford fan with lots of local games against clubs we’ve duelled with many times before. I’m just delighted to be in the Championship after 22 years and looking forward to every game whoever we’re playing.

GM: A big thank you to Rhys for taking the time to speak to us. I’m sure you’ll agree it’s refreshing to hear the intimate details that have gone into planning the new stadium from the club and supporters alike to ensure that ground will be a part of the community and be set apart from the all to common new builds. You can keep up with Rhy by following him on Twitter @rhys1984