Blogger and the92.net co-founder Pete completed a hat trick of 2-in-1 weekends heading into the East side of the nations capital…

After ticking the Amex Stadium off the night before, to complete the 2-in-1 on the way back up North Leyton Orient was our next destination. We left the B&B in Keymer set up for the day after a cracking homemade breakfast and made the trip to Woolwich Arsenal station which took just under an hour and a half. On my rare forays into the capital before I’d always been on the underground so it was a nice change to take the DLR and get to see the odd famous sight on the way. Most notably the O2 arena, which in all honesty I still call the Millennium Dome and less notably the Golden Syrup factory, which I never knew until now came from the heart of London. 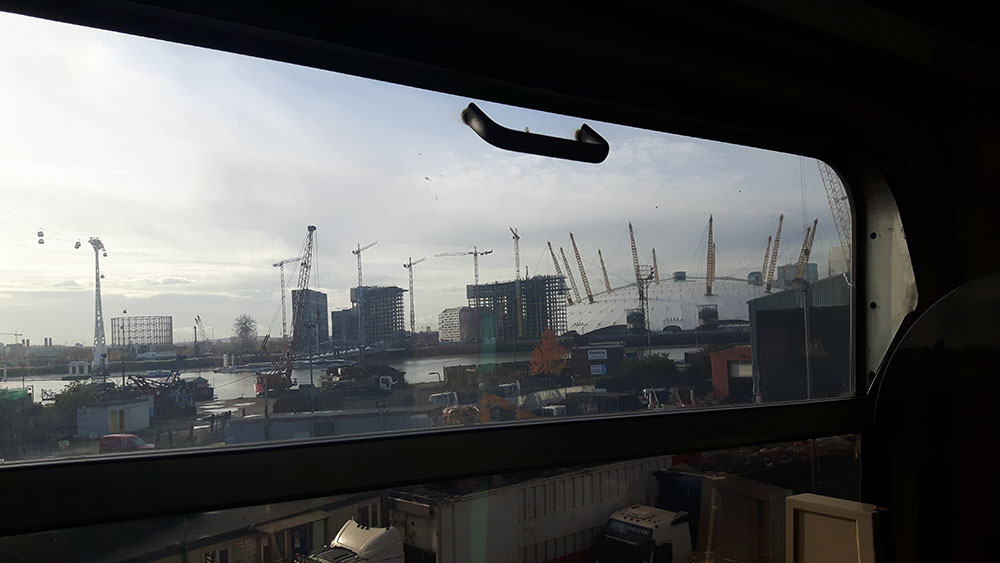 As we approached Stratford you could see that the area was still being developed following the London 2012 Olympics. Despite this it was a surprise at some of vast open spaces that were still left neglected and bare. Not being familiar with London you get the impression it’s all cramped and packed, but to me it looked like there’s still a lot of space left to develop. Anyway I digress, as we were passing through Stratford en route to Leyton it would have been rude not to go and have a quick look at the London Stadium, the new home of West Ham United. Seeing it for the first time in the flesh it is an impressive structure. However, looking to my right at the building works and to the left of stadium at a vast open space of land it feels a bit lost. I’m sure over time it will settle in situ from the outside at least. 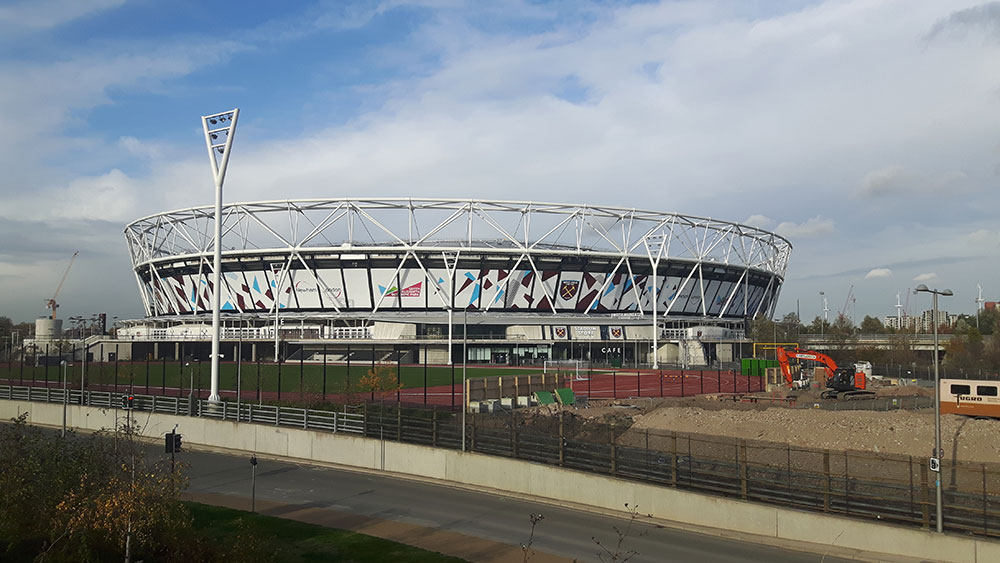 A club in turmoil

Taking the 2-minute tube journey to Leyton gives a real perspective of just how close the Hammers have moved in on the Os. Yet with this threat on the doorstep and the potential for the next generation of Orient fans to be drawn away the club were anything but united. Since being taken over by Italian businessman Francesco Becchetti in 2014 the club has been on a downwards spiral. In May 2014 they were a whisker away from Championship football. First throwing away a 2 goal lead, then losing the subsequent penalty shoot-out against Steve Evan’s Rotherham. After coming so close I thought they were doomed and a day after that defeat had a fiver on them to go down at 25-1. With the takeover materialising over the summer I believed my bet was gone before it begun. The owners brought in some eye catching signings in the close season for League 1 at the time including Jobi McAnuff, Jay Simpson and Darius Henderson. They looked to be the kind of players to give them enough to go one step further but instead the opposite happened. Even ex-Italian international (and Champ man legend) Andrea Dossena signed in November couldn’t save them from relegation (or my pocket from a tidy profit!). 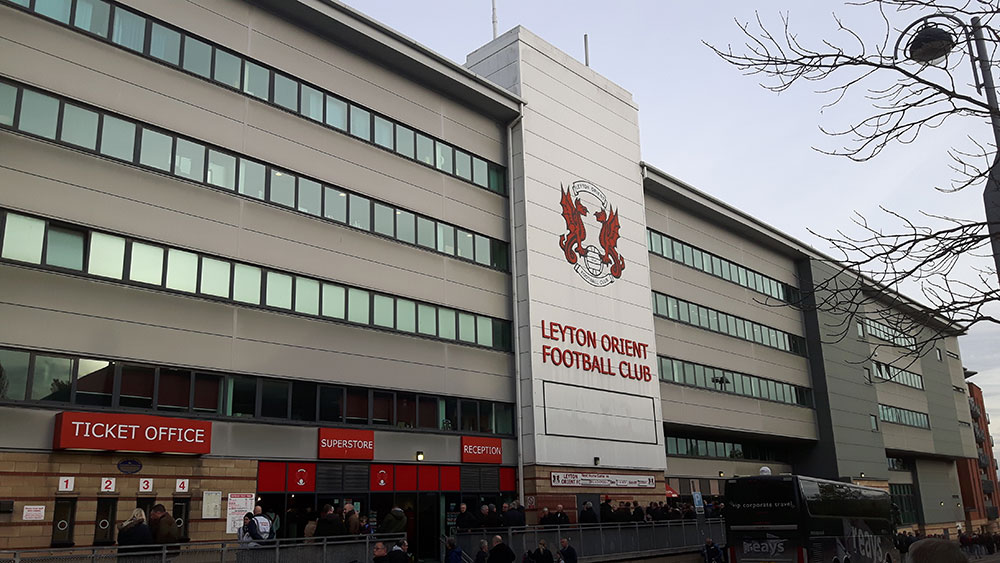 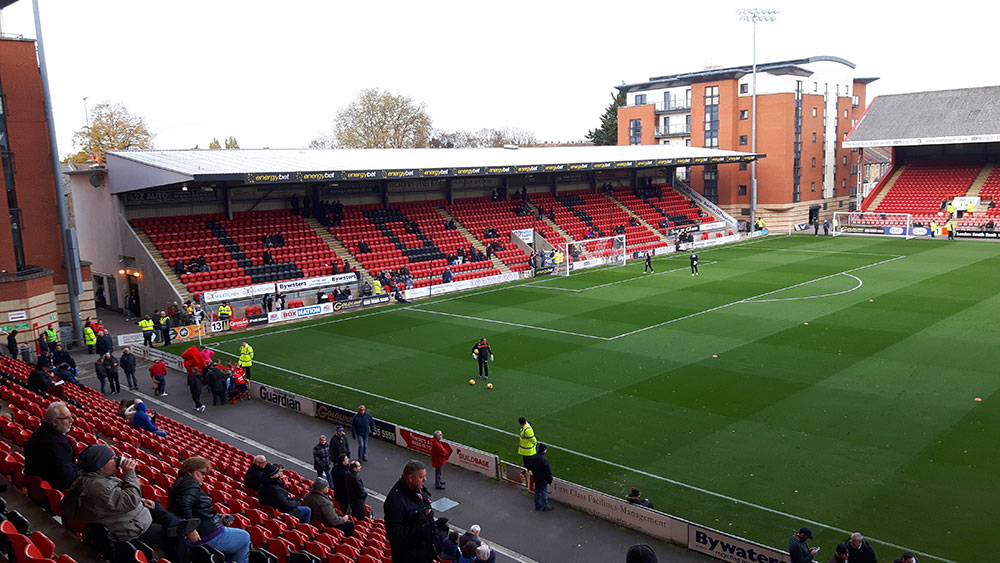 Where to go pre-match

Fast forward a season and Orient were still in the fourth tier and were not having the best of times. Away form had been decent, but home form truly woeful; a run of consisting 6 league defeats on the bounce (7 in all competitions). There was a protest planned against the current regime, but off the back of a 3-0 away win at Colchester the previous week a cautious sense of optimism was in the air at the supporter’s club bar. The bar is well worth a visit, especially if you like your real ales. With a wide selection of drinks, cobs on the bar, raffle and a host of Camra awards under their belt it had a really warm community feel and was an enjoyable place to take in the early kick off of Arsenal away at Old Trafford. 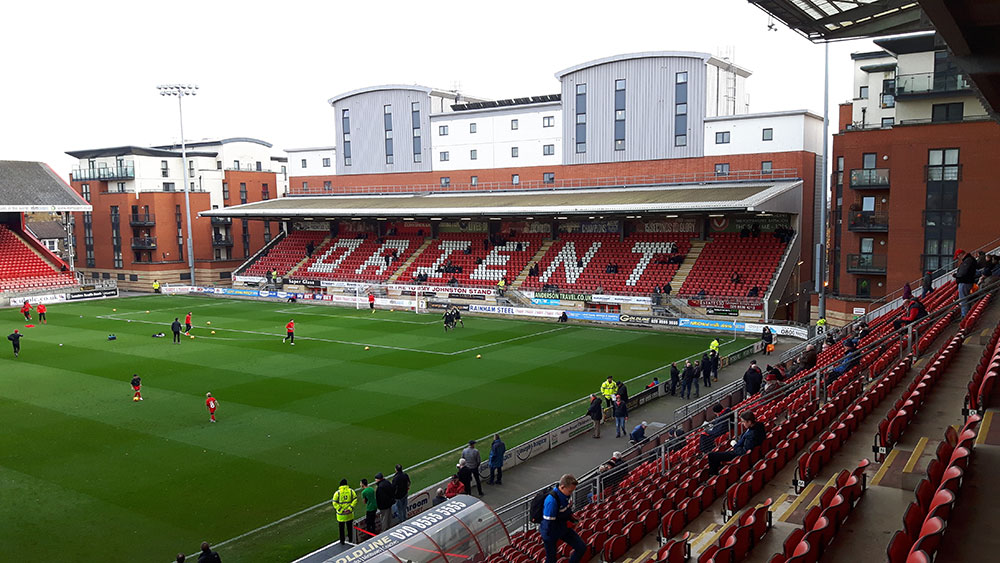 Room with a view

Brisbane Road is made up of 4 stands of varying ages, each one separated in each corner with a block of the flats. It’s the first time I’ve seen these flats in the flesh and I had no idea how ‘in’ the ground they were. The inward facing properties, with balconies have a cracking view of the pitch. In the bitter conditions there were only a handful of viewers across the 4 blocks. In the summer though, at which other ground could you watch you team play live whilst having a bbq and being able to nip to the fridge for a cold tinny?! Maybe once I’ve completed the 92 that should be part of a future challenge! 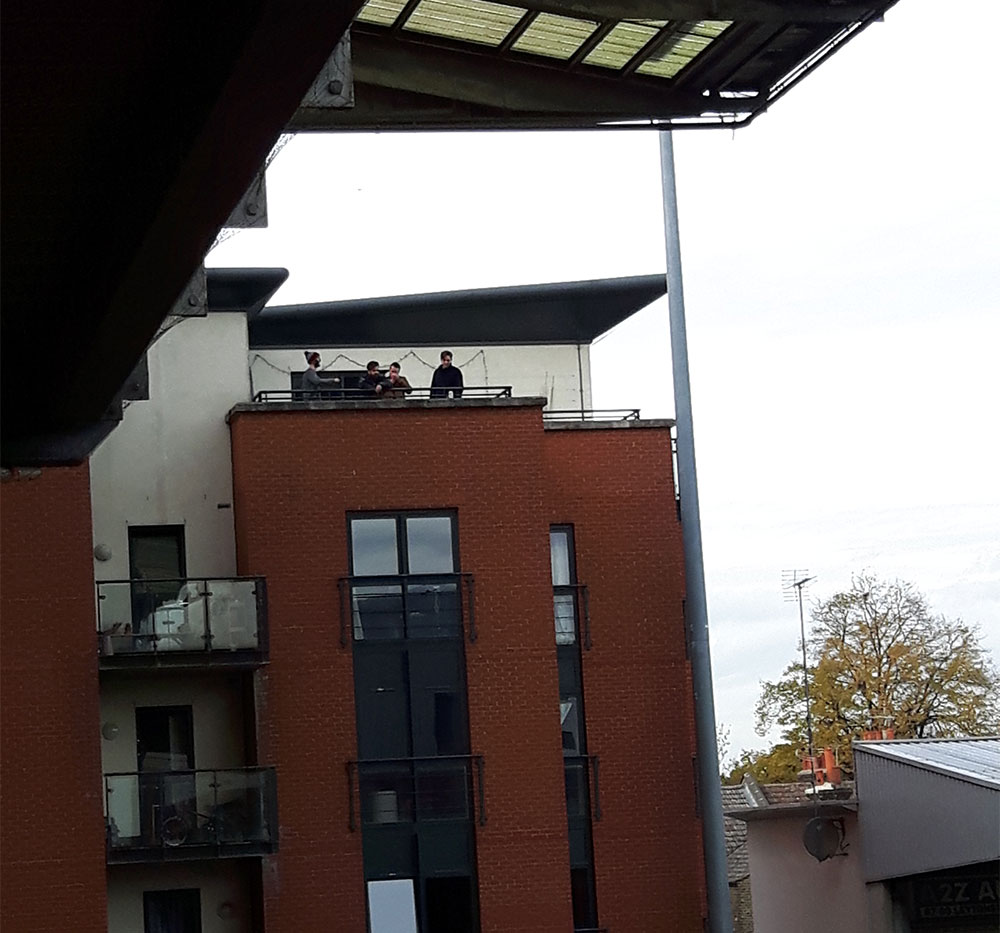 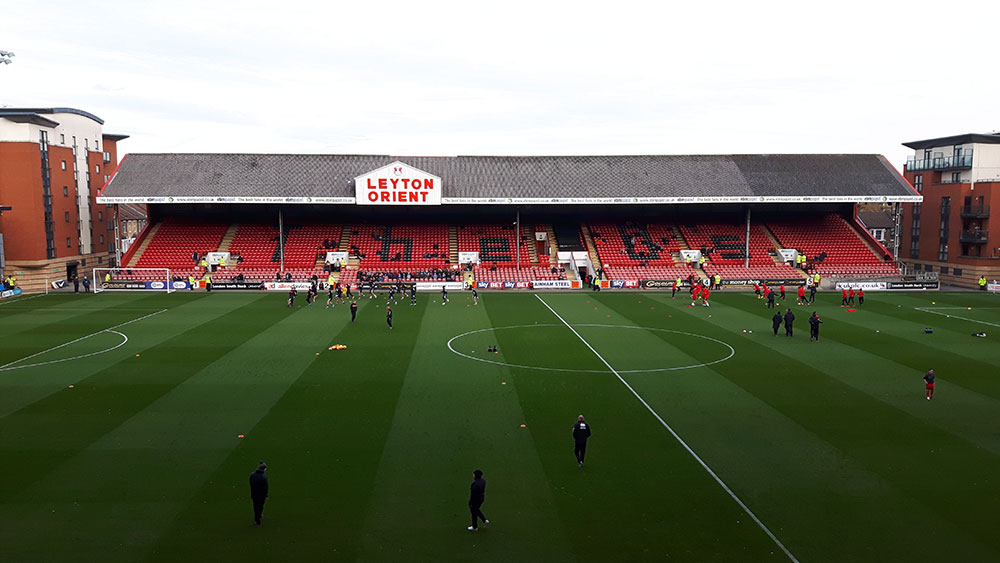 Being a big fan of traditional style grounds naturally I was drawn to the East Stand. The off centre signage with skew-whiff lettering, corrugated gable roof and pillars make it a thing of beauty. Puzzled by the signage not being in the middle I took to Twitter and soon had the answer; the stand used to be part of the old Mitcham Greyhound Stadium and was extended to take up the length of the pitch (thanks to @SpiceAlbert for sharing the photo below).

@the92dotnet It was bought from Mitcham stadium (pictured). It probably indicated the finish line for the dogs. It's never been central. pic.twitter.com/xabbZtCxL2

Tangerines on the up?

I’d seen the visitors Blackpool a couple of weeks before in the FA Cup and they looked good, albeit against non-league opposition. After a number of turbulent years, on the pitch at least they were starting to gain some momentum. Off the pitch though they were still in a similar position to Orient protesting against their owners, the Oyston’s, who show no signs of leaving. Since Orient won me that nice little earner I’ve had a soft spot for them but early on against the Tangerines the signs weren’t good. The football was poor and the team looked petrified on playing in front of their own fans. 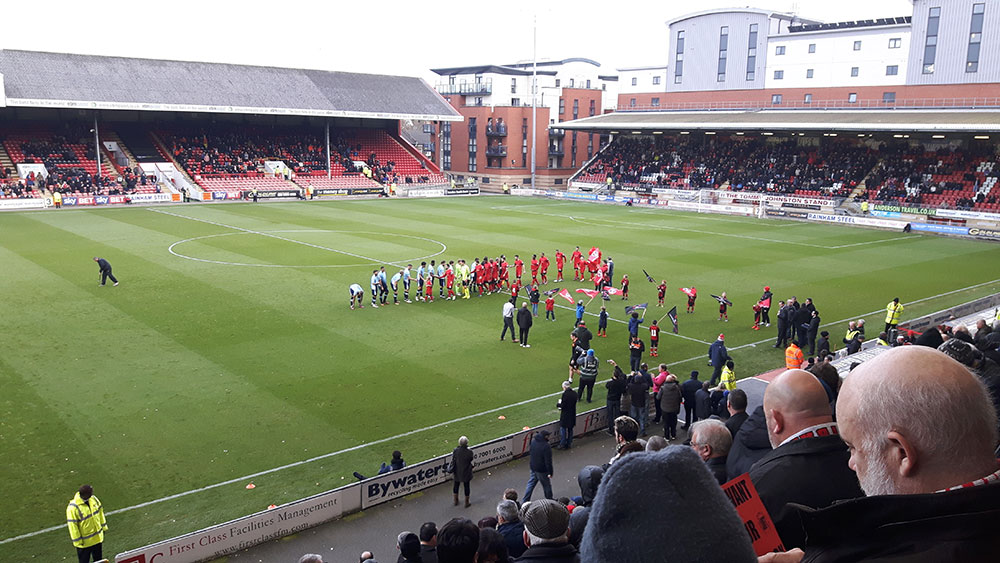 Blackpool broke the deadlock on the half hour and it was far too easy. Jamille Matt comfortably muscled an Orient defender off the ball, before cutting inside and finishing powerfully. Straight away though the home side were so close to getting back on level terms. Barely 2 minutes later Massey’s rising drive from range cannoned back off the bar with the keeper beaten. It’s a cliché, but had that gone in it may well have been a different game. 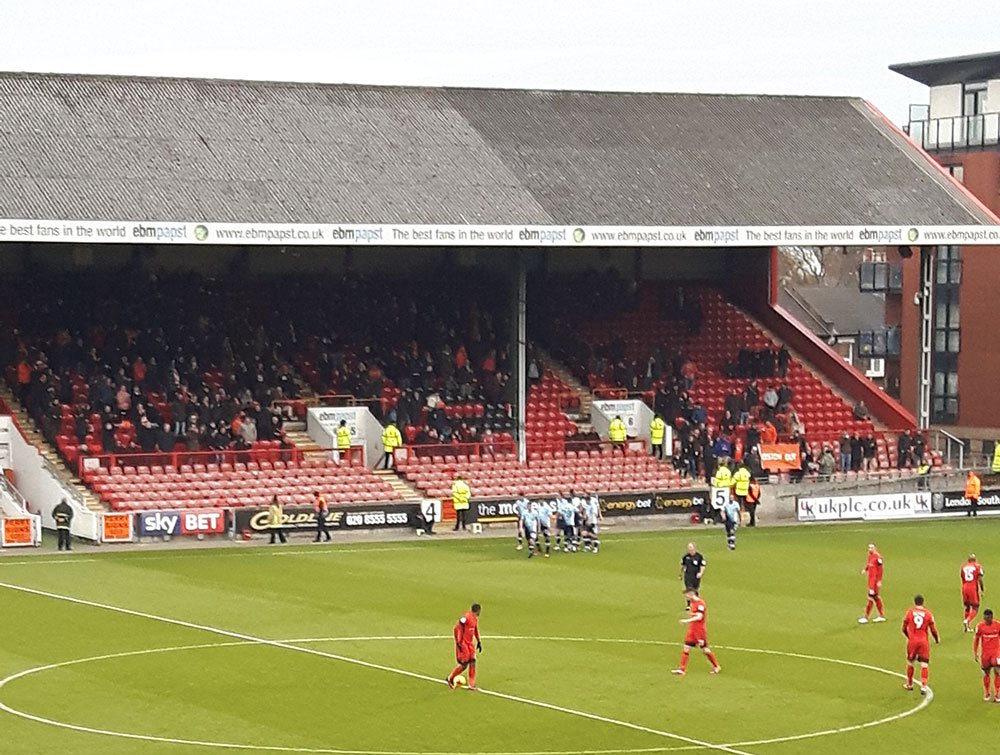 The visitors celebrate taking the lead

Centre half Alfred made it 2-0 before the hour and had another disallowed as the away side started to boss the game and home fans frustrations grew. Striker Vassell was causing all sorts of problems for the Os defence and almost scored a worldie all of his own work. Orient fans who stayed still the bitter end had something to cheer as Paul McCallum pulled a goal back with a minute to go, but it would have been undeserved if they had scrapped a point. 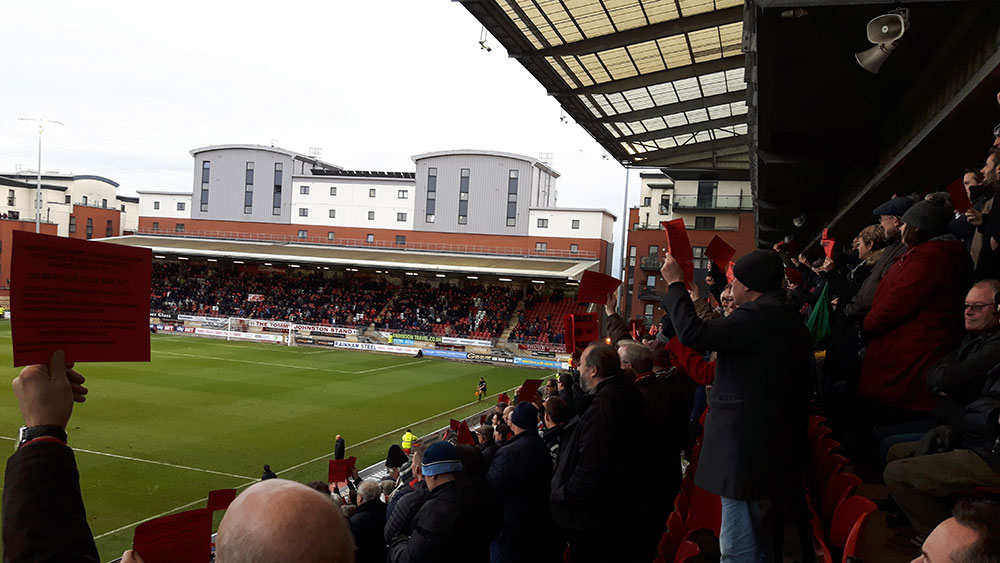 What does the future hold?

It’s never nice to see a club in trouble, but with the way things are going at Leyton Orient it’s difficult to see where their future lies. Since my visit in November the club is now up for sale and I can only hope for the fans sakes that the Italian owner goes quietly and the Os can attempt to get back on their feet.

Atmosphere 2/5: With a small travelling contingent and not a great home crowd with little to shout about despite the odd chant the atmosphere never really got going.

Location 4/5: In amongst the houses, just off the High Street and an easy journey in and out of London.

Pint rating n/a: Didn’t sample however I was impressed with the wide range of different ales available in the supporter’s club bar.

Pie rating 0.5/5: Given the incubation time of food poisoning and the time I was sick compared to the time I had a pie I’d say avoid at all costs!

Character 4/5: With each stand being individual in its own way, plus the flats in each corner I think the ground has a great personally.

Have you made the trip to the home of Leyton Orient? If yes, you can tick the Matchroom Stadium off your 92 checklist or if not plan your trip there: