Rightly so there was a lot of hype surrounding the World Cup and after the disappointment of 2010 to live up to expectations I was somewhat wary of getting too carried away in the build up to this summer’s competition. Boy did it deliver though, the group stage in the main being non-stop entertainment with goals flying in left right and centre.

Looking back at the goals it has been a tournament of Volleys. Many not only claim that James Rodriguez’s strike against Uruguay in the last 16 was the best goal of 2014 but the best World Cup goal of all time. In addition there was Tim Cahill’s volley against the Dutch and Mario Gotze’s fine chest and finish in the final itself. Then you had the out of the ordinary – Robin Van Persie’s diving header against the Spanish showing an incredible level of audacity from all of 18 yards.

There is no doubting the quality, skill and technique required in the aforementioned strikes, however for my goal of the tournament I’m going slightly left field. It has to Haris Seferovic’s winner for Switzerland in their opening group match against Ecuador in the third minute of stoppage time, a goal which in my eyes encapsulated so much of this World Cup. 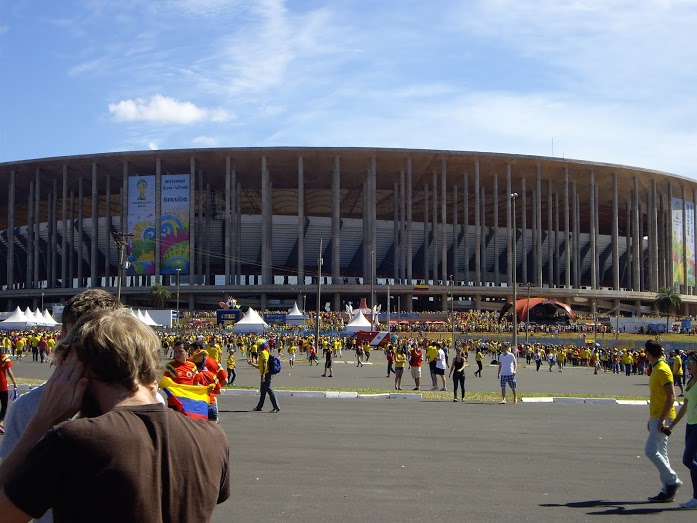 stádio Nacional Mané Garrincha in Brasília where the magic happened! (Pic by Moss)

As the game looked to be ending in a draw Antonio Valencia broke down the right and crossed to pick out Michael Arroyo on the penalty spot, he controlled the ball and set himself to win the game for Ecuador, but before he could smash the ball home Valon Behrami executed one of the most perfectly timed tackles I’ve ever seen. Behrami didn’t stop there though, but as he raced up the field he was cynically taken down. However there was no rolling about and a brilliant advantage played by the referee – the Swiss were on the attack. The ball was switched to the left for the impressive Ricardo Rodríguez to play a low cross to near post with pin point position for the onrushing Seferovic, who had made a brilliant run between the centre halves, to finish.

It had shades of the end of the 2012/13 League One season at Griffin Park, where from missing a penalty in stoppage time Brentford went from the edge of destiny to be plunged into despair in under a minute as Doncaster broke to score and secure the title. From the great saving tackle, to the brilliant refereeing, to clinical finish Seferovic’s goal is one I will remember for years to come.

Do you agree / disagree? Let us know on Twitter @the92dotnet!

Due to stringent copyrighting I can’t find the footage on YouTube – but you can revisit the goal on the ITV Sport website here www.itv.com/worldcup/highlights/world-cup-highlights-and-report-switzerland-2-1-ecuador