A blog as @MossInBerlin travels through eastern Europe to the early qualification games to the World’s biggest club competition: The Champions League (proper).

Fresh from the adventure in Zagreb, we scoured the UEFA competitions fixture lists again, looking at our planned travel route, to find a suitable fixture. A tasty little 2nd Leg of the Second Round of Qualification between FK Vardar and APOEL Nicosia in Skopje fitted suitably and didn’t require a change to our travel plans, or a 400 km diversion like the Zagreb trip. The game was delicately balanced after the first leg resulted in a 0-0 draw, the underdogs being home team FK Vardar, who played at the neat Arena Filip II, host for the Super Cup in 2017. APOEL were well known in the group stages of the illustrious Champions League and were clear favourites.

A panoramic view of the Stadium, post game, with the smoke from flares still lingering.

Entering Macedonia from Kosovo was a short journey to the capital, Skopje. Bags dropped, our first attempt at getting tickets from the suggested phone shop failed (sold out, our guess due to poor abilities in pointing and gesturing), so we stumbled, lethargically, in the sweltering afternoon continental heat towards a traditional Macedonian restaurant, to plan how we acquire tickets, and more importantly, stock up on food and beer.

Our waiter spoke a decent level of English, and we enquired about getting tickets, to which he enthusiastically suggested we go now to a certain shop, about a ten minute walk away, as they might sell out, or the shop might shut. I dashed off, not a great idea in the continental heat, but when the locals are telling you to hurry, when they normally don’t in this part of the world, you do! 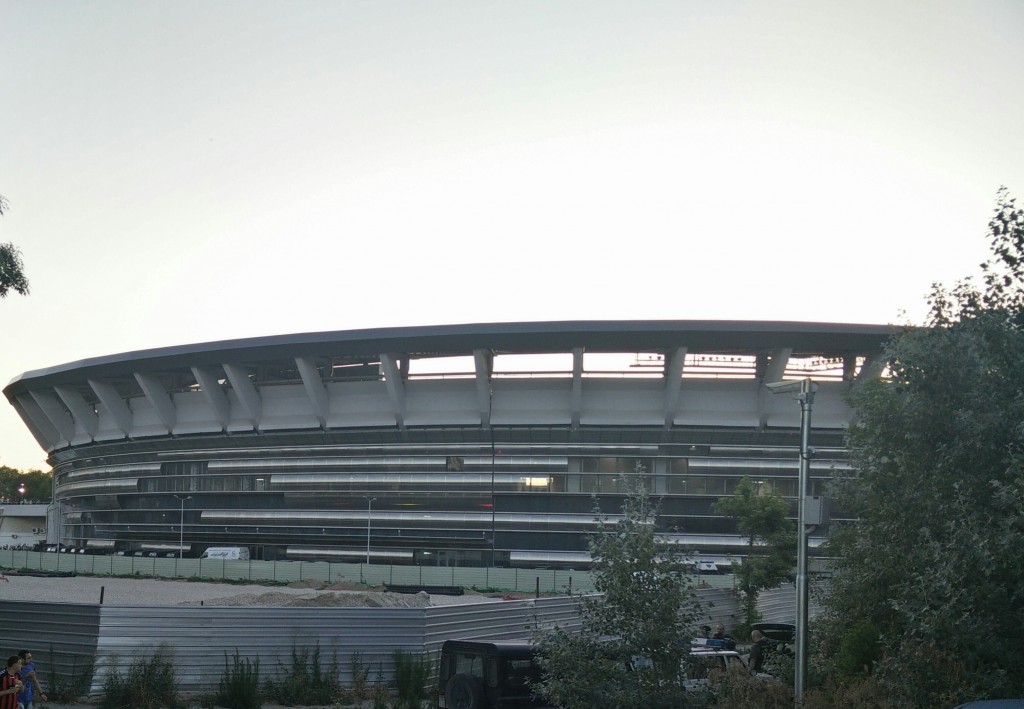 The outside of the stadium as we approached.

I found the shop… some weird cross between a world of Warcraft/music/game shop, that also had a sideline in football tickets. Odd, but I am not going to question the method to the madness, I just want two tickets. And how cheap they were too, coming in at 100 Macedonian Diners each, about £1.15 (€ 1,60). Aware I was unable to purchase tickets in the Ultras tribune, I got them in the section closest to it in the Main stand.

Back to the restaurant, I thanked the waiter, filled my face with my order, a local dish of bacon/steak/cheese heaven, rounded off with a half litre of the local grog, before heading back to our residence. We bumped into a Dutch football fan we travelled in from Kosovo with, who was eager to go to the game, then there were three others who already had tickets. We agreed that we should leave soon, taking a walk along the river from our place, to the stadium, which was adjacent to the river. As the Dutch guy had no ticket, I went back to the shop, a small diversion from our riverside walk, but they were out of tickets, so we continued, hope maybe, that a touted solution could be found.

The stadium crept out of the forested park, as we approached our respective gates, our group to split, agreeing to meet at the hideously huge Warrior on a Horse monument post game. With kick off approaching, and no joy found with the touts, the courageous Dutch warrior decided to just attempt to walk in, claiming he lost his ticket. Blow me down with a feather. It worked. HE WAS IN! Unbelievable Jeff…

As we took our seats in the recently refurbished, yet refreshingly unique stadium, the Champions League flag, unlike in Zagreb, was present, as was the Champions League music, the teams posed for the statutory photos, before shaking hands and commencing with proceedings for this game.

The game started at a steady pace, APOEL certainly looking to stretch the game early on, the talents of new signing Vander Viera opening up FK Vardar, with the first clear cut chance falling to young cypriot Sotiriou, drawing a strong save from Macedonian number 1, Tome Pačovski. For APOEL, Vinicius was breaking up any initial play FK Vadar were looking to build into a threatening attack, who were limited to a smattering of long range shots that never threatened the APOEL keeper, Boy Waterman.

Whilst all this was going on, the Ultras to our right, were pretty steady in their vocality for their team. A flare sparked midway through the half, the smoke slowly settling across the stadium in the still and stuffy evening air.

A drinks break, allowed in such hot conditions, the Ultras erupted, unfolding a banner written in Greek, not their native language, the whole stadium started chanting something, I guess gesturing at the history between Macedonia and Greece (APOEL, for the record, are Greek Cypriots). The history between Macedonia and Greek itself is something of a historical calamity, with the Greeks displaying hostility towards Macedonia after its independence from Yugoslavia in the early 90’s. My question is why didn’t they pick on the land grab issues when it was part of the bigger Yugoslavian force… cowardice being my only answer. 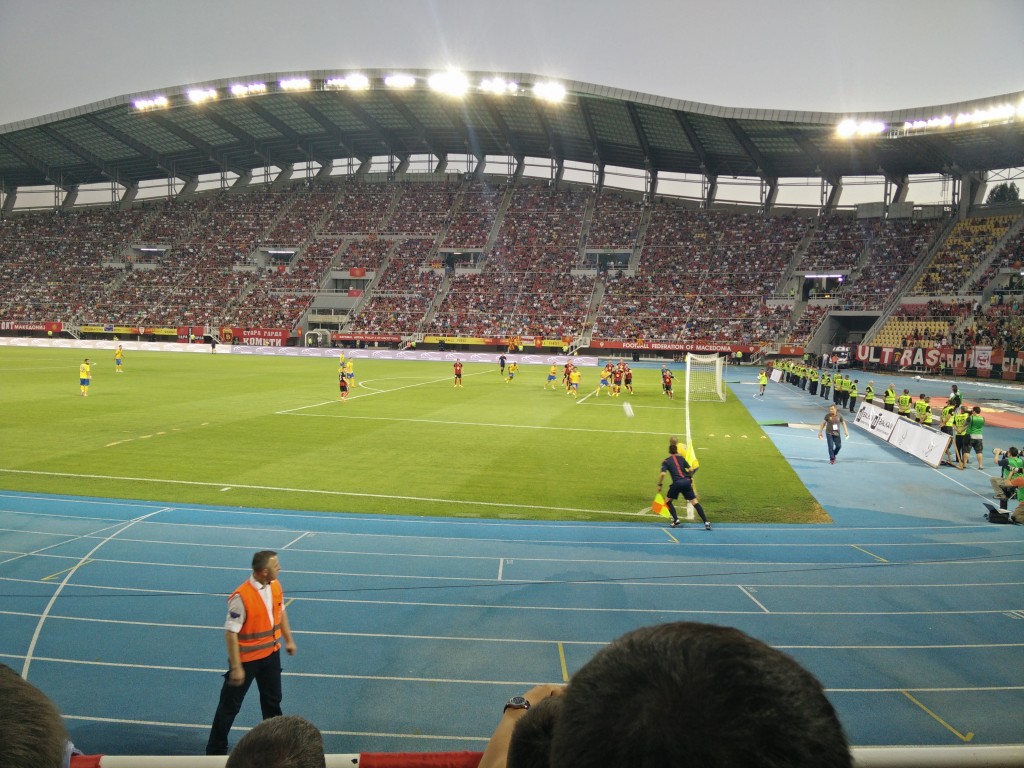 A corner is take by APOEL in the first half.

The game entered half time, and we headed for refreshment, required for just sitting during this hot humid evening. The game balanced at 0-0 still, APOEL in the knowledge that a goal from them leads to FK Vardar needing a minimum of two…

Once refreshed, the game started again, the support continued as in the first half, however the game was in a slower period of play, both teams more diligent in possession, not racing forward, some longer balls being sprayed, with former West Brom loanee, Goran Popov, firing several drifting cross pitch balls.

Around the 60 minute mark, Vander Viera darted across the field, around twenty yards out, the FK defence watching him roam, before he delicately flicked, with the outside of his boot, a sweet ball through the defence for Argentine Tomas de Vincenti to chest the ball down before shooting with his left foot, forcing the keeper low, his save poor, as the ball bounced onwards towards goal. The keepers scramble back not enough, the ball crossing the line. Advantage APOEL.

FK Vardar were startled and pushed harder, the substitutes sent out to warm up. Within minutes, the classic defender for striker substitution was executed. FK Vardar stepped things up, as did APOEL. One looking to get back into the game, the other to close it out. The game swung back and forth, but nothing was troubling either goalkeeper.

As the game wore on, APOEL were more decisive, and eventually created a clear chance, Luís Leal, the São Tomé and Príncipe international, receiving a ball in space, beating the offside trap, just the keeper, who was closing, ahead. A snap shot towards goal, but the Macedonian number one saved well with his feet, Leal fell to the floor, knowing that chance could have sealed it.

The game continued, the home fans tense, but their voice still strong and a deep grey flare was set off, the smoke adding to the the atmosphere as FK were desperately driving forward, more substitutions, weighting the team with forwards. 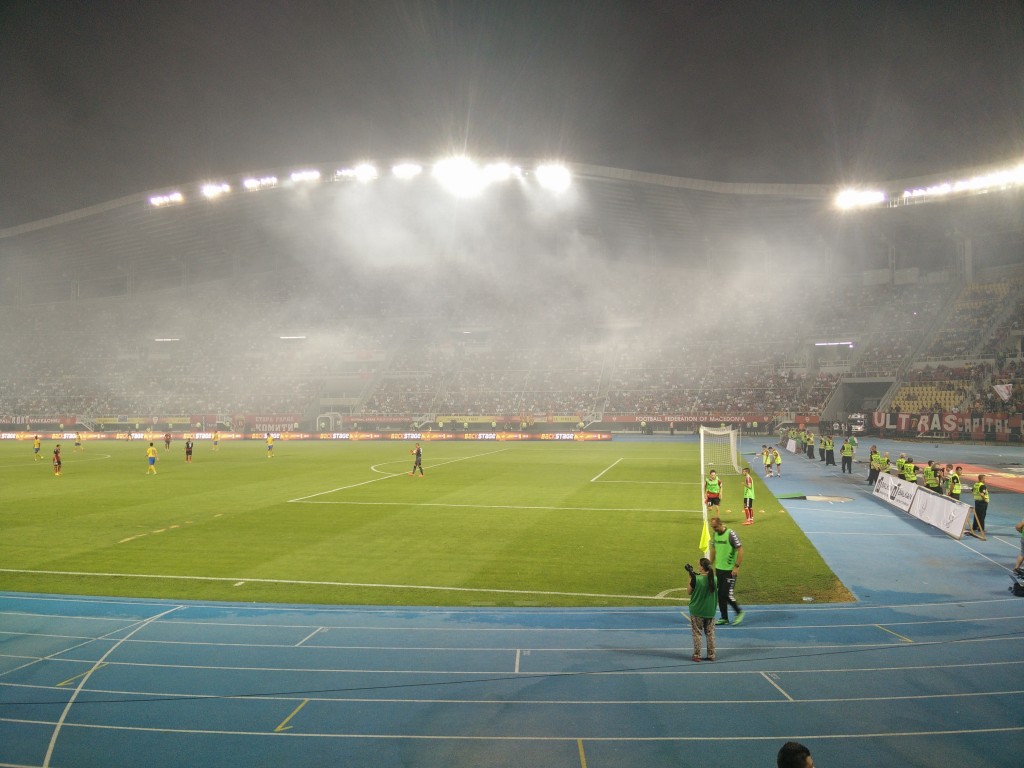 The smoke from the flare billows across the stadium.

As the ball kept being pumped forward, one hopeful deep cross was weakly cleared, the ball falling to full back Blagoja Ljamcevski, who after controlling it, unleashed a drive towards goal, deflecting off a defender, wrong footing the keeper… and GOAL! Pandemonium in the stands, in the fourth minute of stoppages. The players grab the ball and race back to kick off. Could it be? At 1-1, FK Vadar were out, but this is football, and just one goal could change it.

FK Vardar pushed, even the keeper going forward, but as you can imagine, it was too little too late. FK Vardar were valiant against this strong force, but it was too little too late. The final whistle went, and the fans raised themselves, applauding and cheering. A small group of fans ran onto the pitch to celebrate with their heros, or as it actually transpired, to pinch shirts, shorts and socks, leaving one player in just his pants.

As the fans left, and the players, scantily clad, departed the field of play, we explored the stadium from our originally low perspective, to scale the height of the stadium, the impressive swooping stand and enclosed structure more apparent, the scale of the stadium impressive. We exited the stadium, through the press box, as there was no security, and meandered through the sparse media spaces, clearly not attractive enough for large scale media attention.

We ambled through the empty space of the stadium, picking up a beer to accompany us on our journey to meet the other ardent football fans. Upon meeting, our group we happy with the standard of the football, and even though not full of goals, the game saw enough action to be entertaining, the Ultras also providing us the raucousness we wanted from the eastern European football scene.

This was better, the passionate eastern European football being exposed, but the pinnacle, that was, maybe, to come.