After the Champions League qualification exploits in Macedonia, our search was ever further harder, more teams had been eliminated, and quite a few in the region we were traversing.

We spotted that Steaua Bucharest were due to play Partizan Belgrade at the enormous Arena Națională. It wasn’t quite perfect, we would have to shift our expected twenty four hour train journey to Istanbul from Bucharest, but, alas, no problem, we wanted football, and the calendar had been unkind to us twice.

The first time was in giving us no domestic football to see in the Moldovan capital, Chisinau, when we were there on the Saturday, all FOUR teams (3 Top division, 1 in the second division) were away over the course of the weekend. The second meant we would miss everything in Istanbul, which would have been a real pleasure to have seen and embraced. 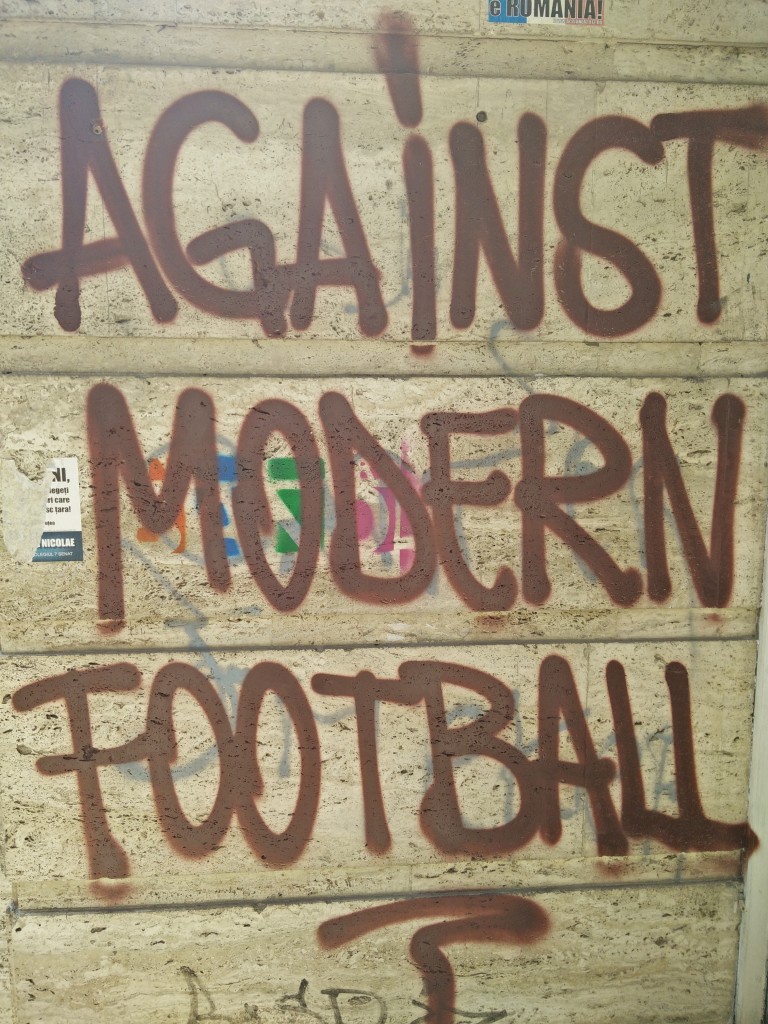 Some graffitiI found around Bucharest.

But alas, nothing, making Bucharest the final opportunity for us to get a game on this tour. Still, we were on the search, looking for the illustrious thundering eastern European football drama.

We had a couple of days in Bucharest before the game. Although Hutch fell ill, he was still up for the adventure,
and I checked the website, and discovered you couldn’t get tickets. We decided to leave it until the day of the game, then just go to the stadium: there was no way they were going to fill this 55,000 seater stadium, in fact CFR Cluj have to play there and could only fill it when Manchester United visited.

After a hearty breakfast on yet another sweltering eastern European day, temperatures not abating from their tedious highs, we retreated to the comfort of our hostel to work out these tickets. We enquired with the lady on the front desk, she initially took her time before asking me to take a seat.

Hutch was still frail, but we waited in the gloomy, yet refreshingly cool, basement.

“Hey,” said an unfamiliar voice “you guys wanting to see Steaua? You won’t have any luck today, those racists are banned from seeing their team. I hate those pigs.”

Stunned, with no introduction to the loud-hailer of shit sounding news, I went for a polite English probe of “Pardon” for confirmation or more information.

His response “Yeah, some time last season their fans were doing some racist shit and UEFA gave them a stadium ban, think it’s like their third in two seasons. No possibility of getting a ticket.” 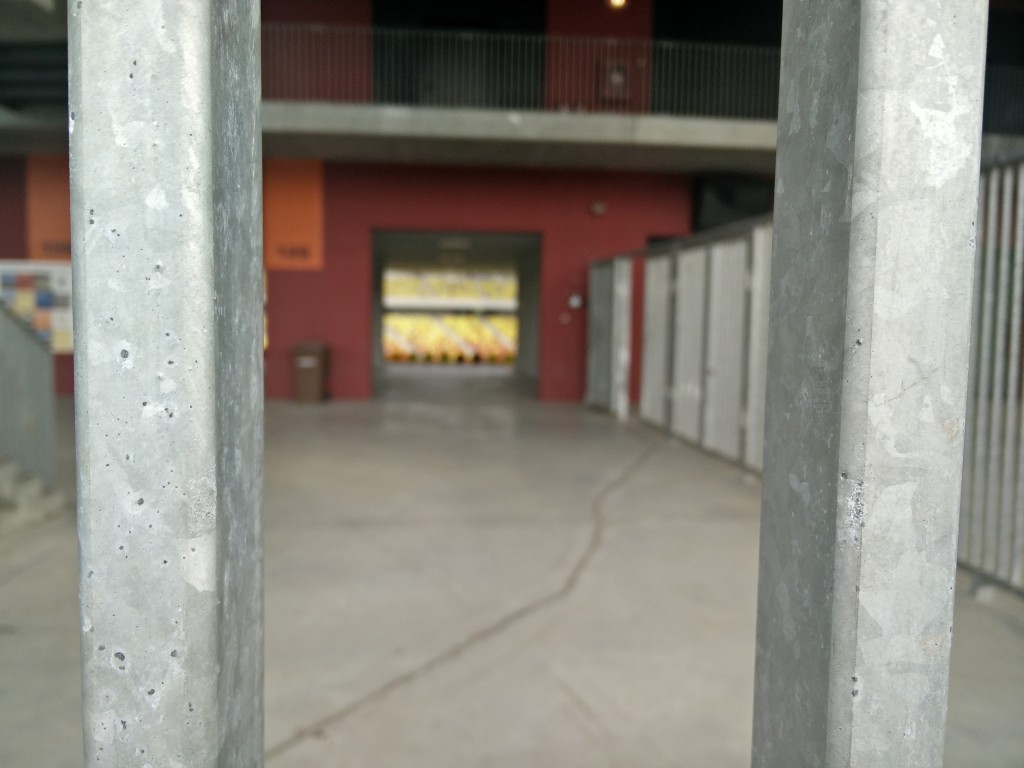 This was the closest we could get.

We were both a little dumbstruck. We had pinned our hopes on this game for it to deliver the magic of eastern European football, the route for qualification to the premier club competition of the world, The UEFA Champions League.

We had muddled our plans and hung our coats on this fixture. We had reduced the number of days we would be staying in Istanbul, a city that needs time. The irony is that we checked Dinamo Zagreb out as a potential candidate for fan bans before we darted across Croatia to make the game.

This was, In some kind of weird way though, also part of this crazy eastern European football malarkey. Steaua Bucharest, the pin up boys of Romanian football, the European Champions of 1986, defeating the mighty Barcelona on penalties, were now banned from allowing people to attend games at their brand new sparkling city stadium as they have to qualify for the European Cup (Champions League).

Disappointed, we found a local bar to watch the game. There wasn’t much of a fuss from the locals. Not every bar was showing the football, and the fans weren’t out in force. What is up with these guys? Maybe it is was in the out of town suburbs where the TV’s were the focus of what just a handful of people could see in the monolithic stadium. 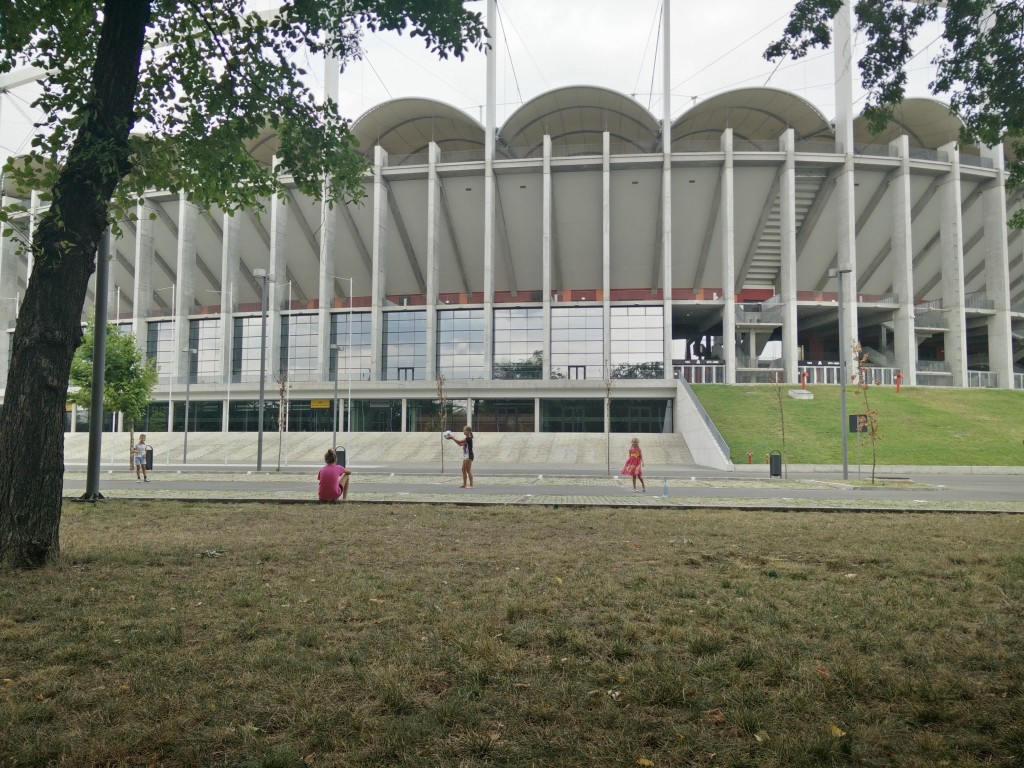 Some children playing outside the stadium, waiting for their grandma to finish work.

It was weird watching the game, the bowl of the stadium empty of fans, the noise of just the technical staff and players echoed around the stadium. It was an entertaining game, the first opening 25 minutes were full of attacking impetus, with the away team, forcing the keeper into more action with the chances that were taken. The latter stages of the half were tedious, the players clearly sapped from the heat.

Steaua started the second half in the ascendancy, keeping possession and breaking with ease to test Živko Živković on a couple of occasions, but Partizan were fighting and on one of their few forays forward, a clever reverse ball into the path of full back Miroslav Vulićević was struck first time across goal. Not a bullet. But enough of an angle to elude the keeper and creep into the bottom corner of the net. Advantage Partizan. Away Goal advantage too!

With no support in their stadium to give them a push, Steaua had work to do in the remaining 25 minutes. They battled, but Partizan stayed organised and regimented. The game got scrappy and was disrupted with a flow of substitutions. Steam were in the ascendancy though, and continued to push onwards. A cheap free kick, wide right, awarded to Steaua. A darted ball into the congested box, missed by the Partizan defence, but not by Varela, his firm header rippling the back of the net, the fans wen… no, no fans, but the noise of the 86th minute goal was certainly celebrated louder than the Partizan goal had been. Fortunate to equalise, and it wasn’t long before the shrill of the referee’s whistle echoed around the empty church to football to signify full time. The game on tenterhooks at 1-1. My biggest learning to take from this, was purely the amount you can hear the players and technical staff talk, a real learning for aspiring footballers, to understand and learn the importance of communication.

In the following days I did get to the stadium, and played football with a local family, barefoot, in the shadow of this wonderfully large, basic, stadium, and later completed a run around it,

Panorama of the Stadium, Arena Națională.

Well, that was it. After three attempts, the third time was certainly the unluckiest, but we had tried. Or… Hutch had to be in Istanbul, his long haul flight to Beijing a must. I, on the other hand, didn’t. My journey back to Berlin could be changed. I had a friend in Belgrade, I could get the return leg of this Champions League Qualification tie. At least I could watch that, I had already checked. No stadium ban.

This was a option, the passionate eastern European football still being chased in the form of Champions League qualification. But the pinnacle? This was the absolute last role of the dice!