Blogger and Glovers fan pb1uk headed to the home of Notts County as Yeovil made the journey from the West Country to the East Midlands.

Thoughts on the ground:
Being a Glovers exile living in the East Midlands, Notts County is the away game I look for first on the fixture list. Living almost 200 miles from Huish Park, being able to hop on a train to make the 9 mile journey to see my team play is somewhat of a luxury. Despite winning on the last 2 trips to the Lane (both of which I was unable to get to due to unfortunate fixture dates!) I was yet to see Town collect a point there from 2 visits. Either way it seemed a hat trick was going to be completed today…

Meadow Lane has been home to Notts County, the oldest Football League Club for over 100 years. The stands currently in situ were developed in the early 1990s. Although the works were planned previously they were influenced by the Taylor Report, which followed the Hillsborough and Bradford fire tragedies. In my eyes they represent a time, and I don’t mean this in a bad way, before modern stadium design evolved later in the 90s. Each stand is very traditional looking sitting along each touchline with no corners filled in. Looking back at some old photos I really like the way features of the old ground have been carried over to the new. The triangular club crested signage and flag pole which sits in the middle of the front of the roof of the Jimmy Sirrel stand was part of the then County Road stand. 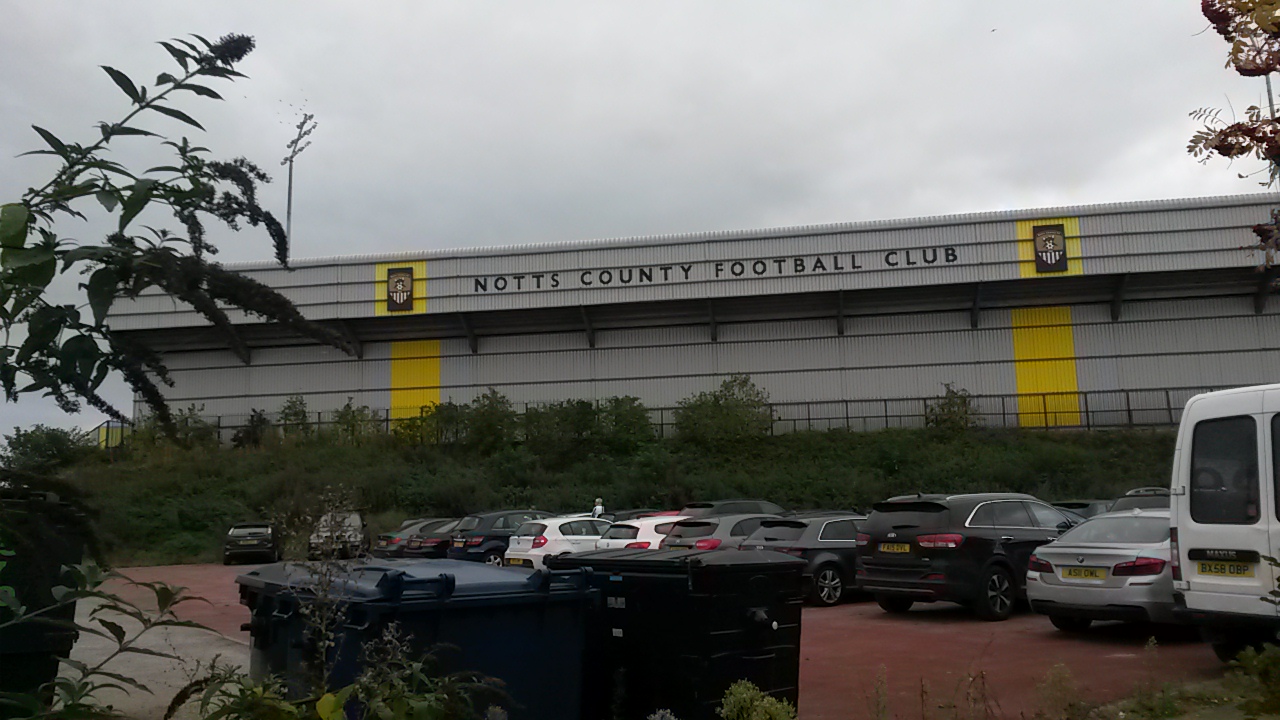 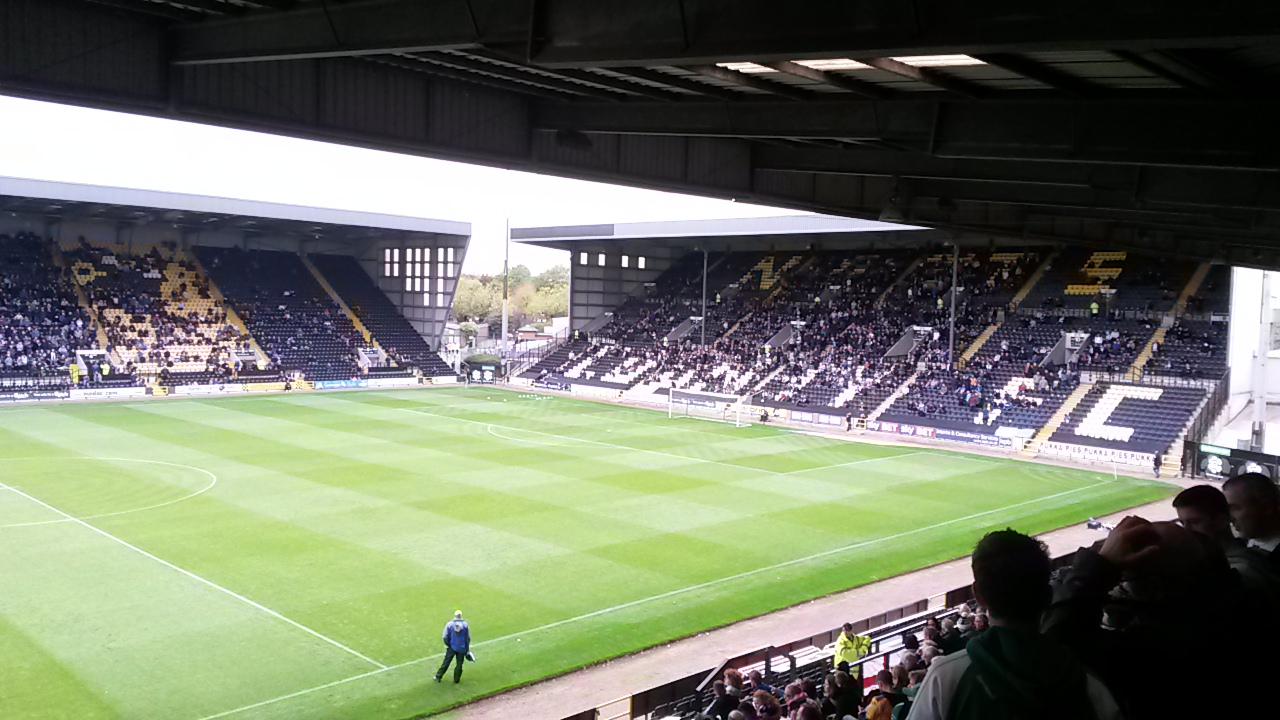 The stadium has a capacity of just under 20000 for football, but with County languishing in the fourth tier of English football this season they have been getting on average just over 5000. This average was greatly helped by the local derby with Mansfield Town, which brought in over 10000. I remember watching on TV when Manchester City visited Meadow Lane in the FA Cup back in 2011 – Notts were unlucky not to hold on to claim a famous scalp that day and the place was bouncing.

The visit from struggling Yeovil attracted 4030 with just over 200 away fans making the long journey north and the stands were anything but bouncing. It’s such a shame when you see a stadium like this only 20% full as it really hinders the atmosphere. I wonder why the club doesn’t close a stand and/or sections of seating to get fans more closely grouped together to generate a bit more noise?

Thoughts on the game:
Both clubs went into the game looking for form. County were without a win in their last 3 league matches and pressure was building on manager Ricardo Moniz. With over 20 arrivals in the summer and a squad teaming with quality for this level much more is expected from the likes of Izale McLeod, Jon Stead, Roy Carroll and Alan Smith than lower midtable. In the opposing dugout Paul Sturrock was without a win in 4 league games. There has been a long injury list at Huish Park so far this season, but some players were on their way back as Ryan Dickson and Mark Laird made the squad.

Despite the threat of a chip pan fire in the kitchens under the Derek Pavis stand disrupting the start of the match we did get underway at 3pm, although neither side set the first half alight. It was a scrappy affair with County having the lion’s share of possession. Notts hit the woodwork twice with their only serious efforts on goal. Adam Campbell hit the outside of the right hand post following a run in from the flank and Izale McLeod saw a flicked effort come back off the left post after beating Krysiak in the Yeovil goal. The away side mustered nothing more than a couple of half chances. Sheehan curled a freekick narrowly wide from a promising position and Dolan sliced a half volley wide from the edge of the area. 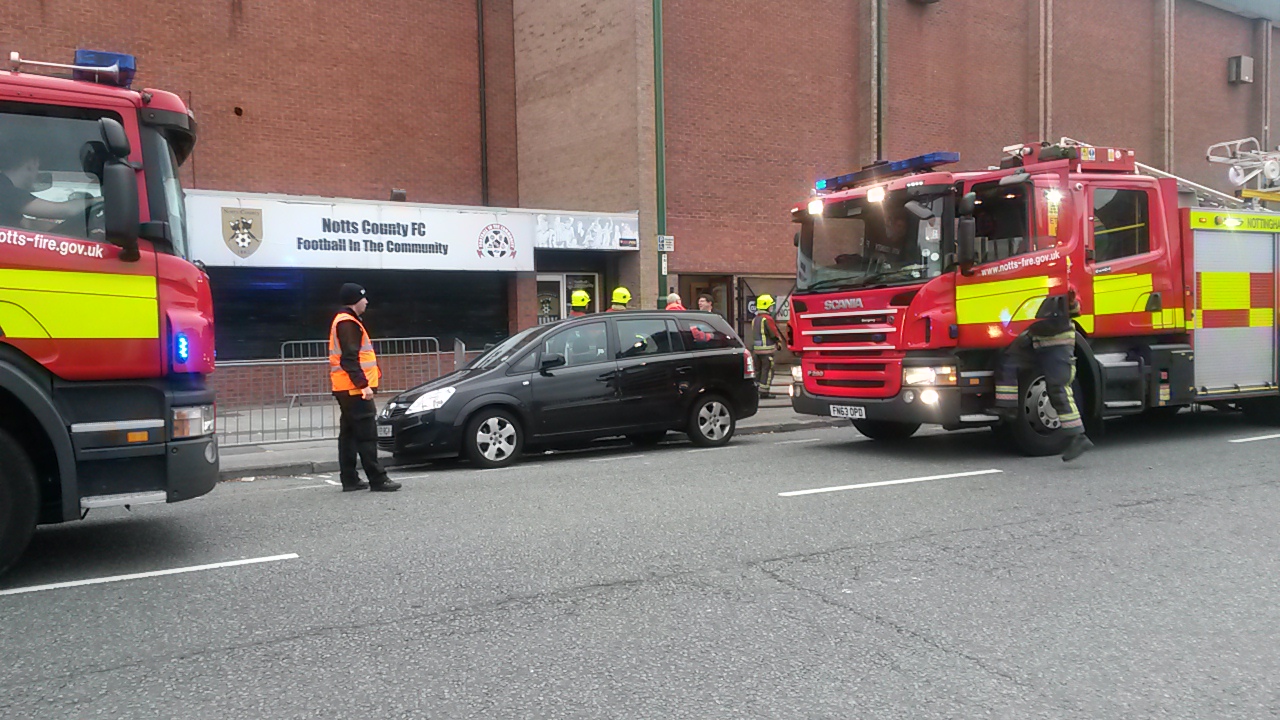 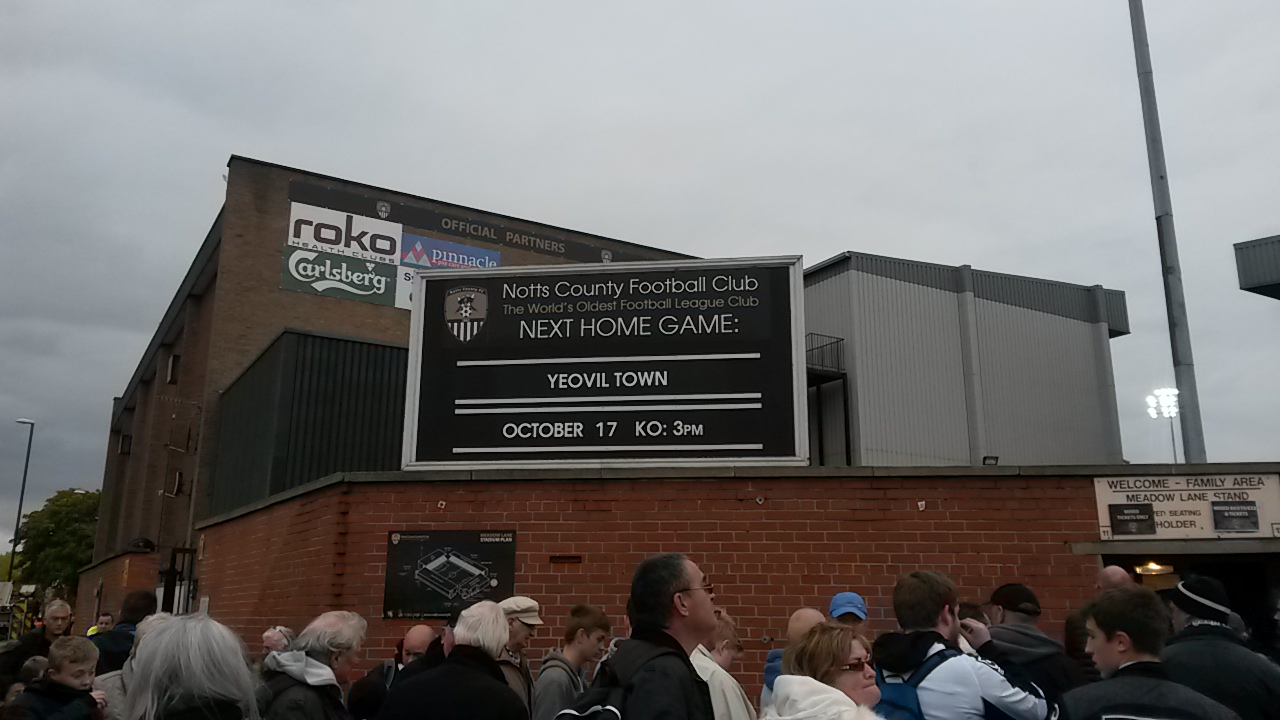 It didn’t take the home side long to make the break through in the second half. A freekick on the edge of the D by former Ajax man Opoku Aborah finding the net with the help of a deflection off the wall. 6 minutes later and the tie was effectively over. As Yeovil pushed up the pitch a clearance was flicked on by Alan Smith for McLeod to run onto. The striker, who was clearly played onside by Arthurworrey ran through and held off the challenge of the Fulham loanee to smash home. The Glovers did get into a handful of promising positions in the last quarter of the game with some dangerous looking deliveries into the box, but all failing to pick out a yellow and green shirt. 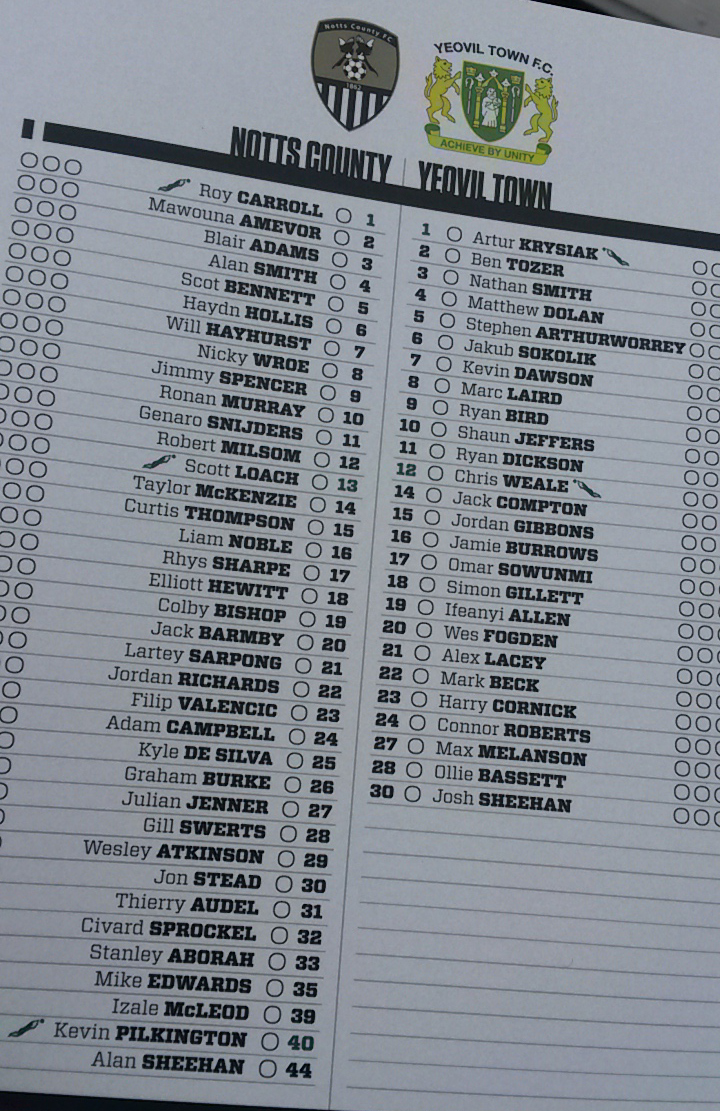 The difference in the quality and size of the squads, judge for yourself…

The future does look good for the Magpies. They clearly have a squad that if used correctly can seriously compete at this level. Speaking to a few fans the manager still seems to be finding his best XI, with a high volume of changes per game. Once they find a settled team there’s no reason why they shouldn’t be looking a play off finish at worse. It did puzzle me why with so many players to choose from there were still players being played out of position – e.g. Sheehan a left back at centre back and McLeod an out and out striker often out wide. The latter certainly showed what he can do when deployed in a more central area with his goal.

It pains me to see Yeovil like this – the club has a losing mentality that it can’t shake off. After back-to-back relegations the prospect of a third in a row is a very real reality. The club worked so hard to progress up the leagues and did it playing good football, especially getting out of the Conference and in League 2. Yes there have been a lot of injuries but the squad doesn’t appear to have either the quality to get decent results or a clear strategy and way of playing. The back five don’t look too bad, it is what is in front of them that concerns me the most. Out of the 5 in midfield 3 (Sheehan, Cornick and Fogden) look too lightweight for this level. Against Abroah, Alan Smith and Noble in the centre of County’s midfield it was literally men against boys. I’m not denying these players are technically good, but they don’t have the physical presence to be able to take control of midfield and command possession for long periods.

Upfront I felt for Ryan Bird who barely had any scraps to feed off. He hardly saw the ball as the experienced Mike Edwards had his number all afternoon. This was my second Yeovil away game of the season and I’m yet after 180 minutes of football to see us have a serious effort on goal. If this doesn’t improve the future looks very bleak indeed.

Atmosphere 1.5/5: Ground only 20% full doesn’t lend itself to generating a good atmosphere.

Location 4/5: A short walk from the train station, which passes the UKs only ‘Hooters’

Value for money 2.5/5: £24 is around the going rate for this level – the quality of football on show didn’t reflect the cost in my opinion.

Programme 3.5/5: Decent. Had some time to kill after so hung around and got it signed by Jon Stead, Alan Smith and Roy Carroll.

Character 4/5: Traditional style ground which I really like, would be great to see safe standing in the Kop in the future!

Stewarding 3/5: Encountered a bit of a jobs worth steward who could have been more helpful and less patronising.

You can keep up with Peter’s 92 on his the92.net profile here. Have you been to Meadow Lane before? Add it to your 92 here www.the92.net/grounds or plan your trip using our away day planner here www.the92.net/plan-your-away-day/.