With the FA’s recent plans to implement a number of changes to benefit the long term of England team causing uproar we thought we’d get fans opinions on how they could affect their club. First up we speak to Shrewsbury Town’s official website match reporter, programme columnist and occasional summariser for @shrewsweb Martin Wild on what the proposed changes could mean for the Shrews.

Groundsman: Hi Martin, after seeing Greg Dyke’s plans, what are your initial thoughts on the idea of bringing B teams in to the lower leagues?

Martin: First of all, I doubt whether this proposal of Greg Dyke’s will be ratified and it will fall away – a bit like the PL’s bizarre plans for a 39th game a few years ago. Remember? To be played on the Moon and screened globally for more obscene pots of cash? So it’s a non-starter for me. It’s supposed to increase the National team’s chances of success giving young English talent the chance to showcase what they can do in the competitive arena. But couldn’t they do that here by restricting the number of foreigners each PL side could field? Hmmm. But that might affect their global brand and the next time the TV rights attract bidders, the price would come down if little Johnny Smith was at number 9 for Man City and not some Bugatti driving Italian stud muffin.

I read somewhere this week that on goals scored by English players only, Champions Manchester City would have been relegated in 18th place. I think that kind of backs up what point I’m trying to get across. Additionally, Man United ‘B’ would more than likely get hoofed off the pitch away at FC Halifax (just an example and not meant to be derogatory about Halifax’s playing methods). So it may backfire in that regard as clogger centre-halves set out to make a name for themselves against these up-coming millionaires-in-waiting. I remember Chung Yong Lee having his season ended in July when some nosher from Newport snapped his leg in two in a meaningless friendly. Bolton were relegated the following May. 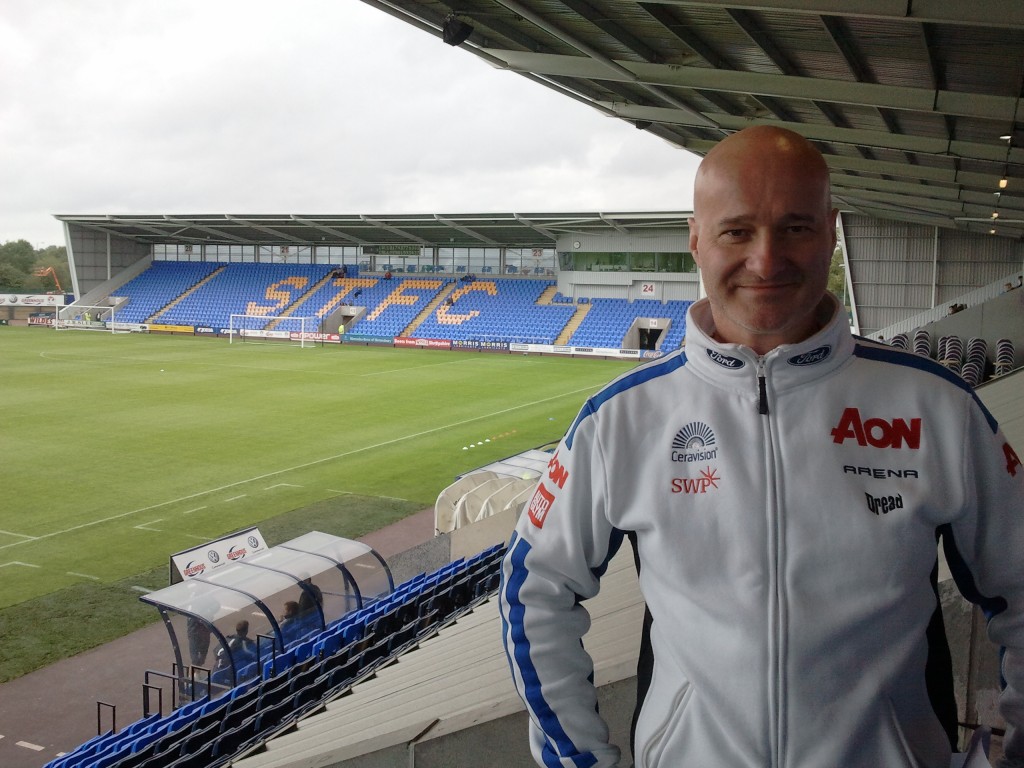 Could Martin be commentating on Shrewsbury v Sunderland B at the New Meadow in years to come?

GM: How do you think this would affect Shrewsbury?

Martin: That’s a tough one but I could only answer as someone who watches the bulk of their games from the press box. I would much rather travel to Fleetwood Town in League Two than go to Altrincham to watch us play Manchester United’s 3rd team. Point of fact, I’d very likely choose to go shopping with ‘er indoors instead, notwithstanding the fact that I’m sure Altrincham is very nice. I just wouldn’t get motivation from a game like that – it may be different for players, I don’t know. Revenues you could never predict unless (God forbid) it ever came to pass. But I couldn’t envisage a winter night game against a PL ‘B’ side putting up the ‘Sold Out’ notices somehow.

GM: Could you see the changes having an impact on Shrewsbury’s ambitions long term?

Martin: No I don’t think so. It depends. We dropped to the Conference in 2003 and thankfully came back via the play offs 12 months later so were lucky in a sense. Look at Cambridge (9 years) and Luton (5 years) who have just come back up after a spell in non-league. It’s not easy. It means the world for their supporters and their towns and cities to have their teams back in the Football League. Why should PL ‘B’ sides start off a league above the Conference Premier? And fans would be outraged if Premier League ‘B’ sides were allowed through from League Three to League One at their expense. Imagine missing out on promotion on goal difference to Liverpool ‘B’? What would it mean to their players by comparison? Very little in my view.

GM: Would you be happy to see your side play in a competitive league against a Premier League B team?

GM: Long term what do you think the impact of the introduction of Premier League B teams would have on the lower leagues in general?

Martin: I think gates would be affected for starters as fans could lose interest quickly. It would do untold damage if the Premier League sides started to dominate in the lower leagues as the competition needs to be on a level playing field. Realistically, how many fans might attend Aston Villa ‘B’ vs. Shrewsbury Town at Dudley? Less than 500 would be my guess and you could halve that if they were playing Newport County. Do we really want to see that? I doubt it.

GM: Do you think clubs like Shrewsbury have a responsibility to supply the England team with players?

Martin: Like Joe Hart you mean, who made his debut for us at 16 in the Conference? Top clubs are sniffing out the top youngsters before they reach 10 years of age these days. So no, I don’t think Shrewsbury, or clubs like ours do, as the gap is cavernous and is growing ever wider.

GM: Another part of the FA’s pans was to introduce strategic loan partnerships, would you like to see the Shrews entering into one with a Premiership neighbour?

Martin: As a club who has utilised the services of 41 loan players over the last three seasons, the word ‘loan’ is still one that makes us wince in these parts. Loans are only really everyone else’s cast-offs and the biggest issue is a soon as you get a good one (rare going off recent experiences), the parent club has ‘em back before you can say “where’s he gone?” As feeder clubs go, logistically it would have to be with a club like Villa or The Baggies. We’ve had loan players in from both and er, they hardly set the world alight to be honest.

GM: If the club did enter one of these partnerships how would you react to the possibility for example of the Paul Lambert from Villa giving instructions about what their players should be doing in terms of playing and training?

Martin: If that were part of the deal, I’d prefer there wasn’t a deal in place. The training methods and when and where they can play, should be a decision left with the club to which the player has been loaned out to.

GM: Are there any alternative actions / measures would you like to see taken to address the issues identified by the FA?

Martin: As I said, restrict the use of foreigners in the first place or perhaps use the Capital One Cup where all PL sides would only be allowed to field ‘B’ teams until Round Four. Let’s face it, few give the competition the respect it deserves these days anyway and gates wouldn’t be too badly affected. Maybe a better idea would be to throw open the JPT for them? There’s a Wembley Final up for grabs so there’d still be a competitive edge without putting the physical exertions of a tough 46 league campaign on still growing limbs. Spain have been so successful in recent years mainly due to the fact that their National team are playing La Liga football regularly at Camp Nou or the Bernabeau. You don’t see the same at the Etihad so England won’t have success by youngsters playing lower league football here.

Thanks to Martin for taking the time to give us his views on what the plans could mean for Shrewsbury. You can keep up with Martin on Twitter @Wildym48. If you are against the FA’s plans please take a minute to sign the petition here, and please go forth a spread the word #sayNoToLeague3! If you want to have your say on what the plans could mean for your club please drop us an email or a tweet @the92dotnet.