Blogger Peter Briers takes in the FA Cup first round tie between Port Vale and Milton Keynes Dons at Vale Park to reach the halfway point of his 92.

With the build up to the first round of the FA Cup greater than i have ever experienced i really felt i wanted to be part of it. I must say the BBC are making a terrific job of the FA Cup coverage thus far, giving the competition the exposure and prominence it fully deserves. Looking down the fixtures the one that stood out was the closest league ground i had’t ticked off, Vale Park, the home of Port Vale. After the ease of a trip to the Britannia the other week i put ‘the magic of the fa cup’ into the sat nav and headed up the A50 again. 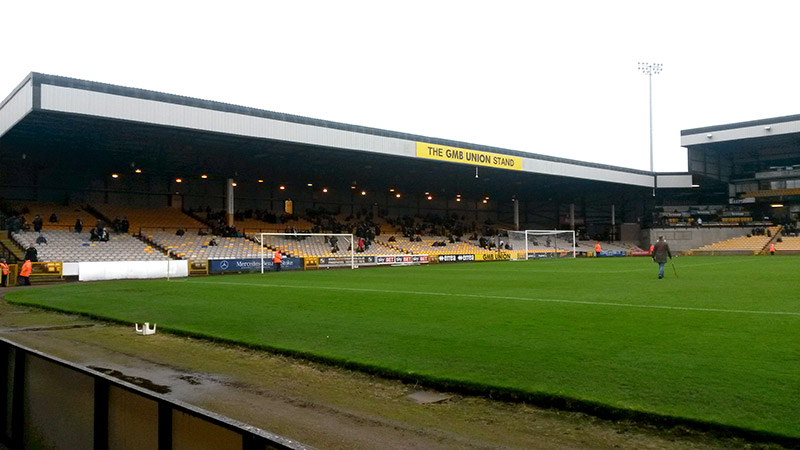 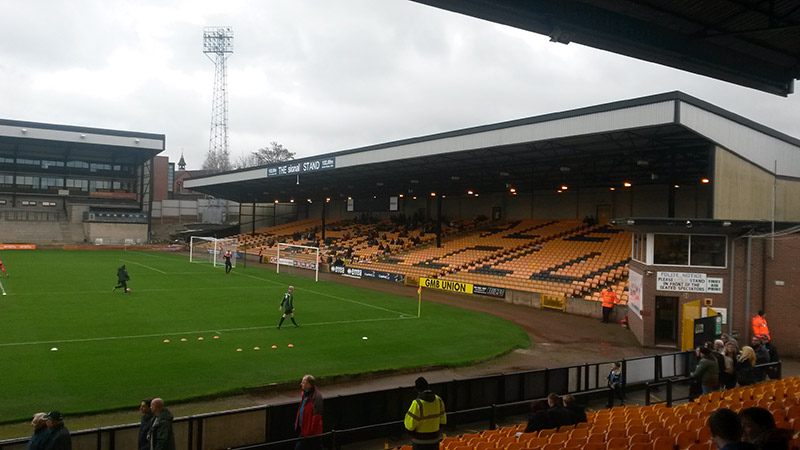 I had previously been to the ground before, only on a brief stop en route to Stoke City a few years back and was really excited to take in a game and properly tick if off my 92. Even from that whistle stop I knew it was a stadium that really oozes character. Grounds aren’t build like this anymore unfortunately, the shape and style of the stands, the Railway in particular really lend themselves to atmosphere and help keep the noise in the ground unlike with so many modern arena bowls where any noise just seems to disappear. With an attendance of under a quarter of the capacity there was still at decent atmosphere created at the right times which in my experience just wouldn’t be the case in a new build. The stadium is kind of build into the ground which i really like and it’s first time i’ve seen an apple tree inside a ground whilst doing the 92!

The game itself was cracking, pretty much all you’d want from a cup tie, bar a sending off! After an impeccably observed silence for Remembrance day the away side came out the blocks well playing in their usual neat passing way and took a foothold in the game. They had a couple of half chances before Southampton academy product Ben Reeves hit the bar with an effort from the edge of the area, with the absence of goal line technology we’ll never know if it crossed the line, but it was close! Against the run of play with their first attack Vale took the lead. A cross from the right was missed by the incoming striker but hit the unfortunate Jordan Spence and went beyond the despairing dive of David Martin. 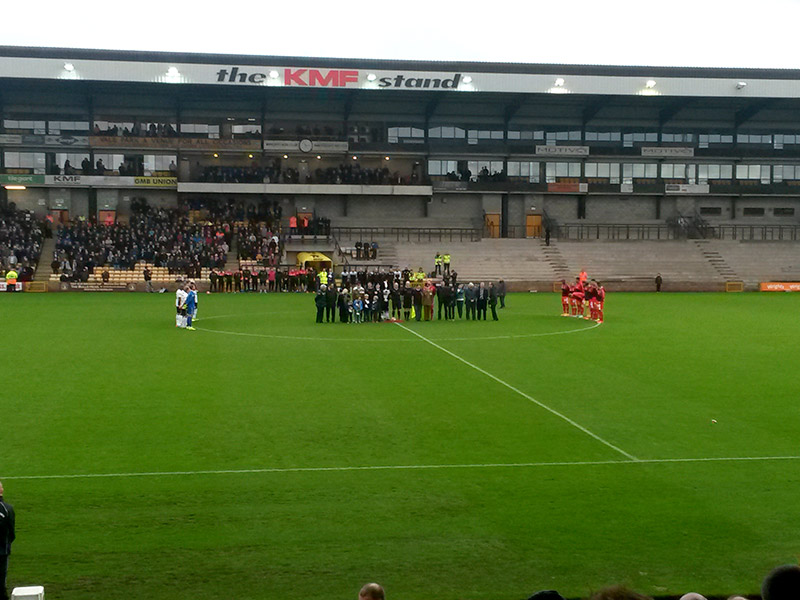 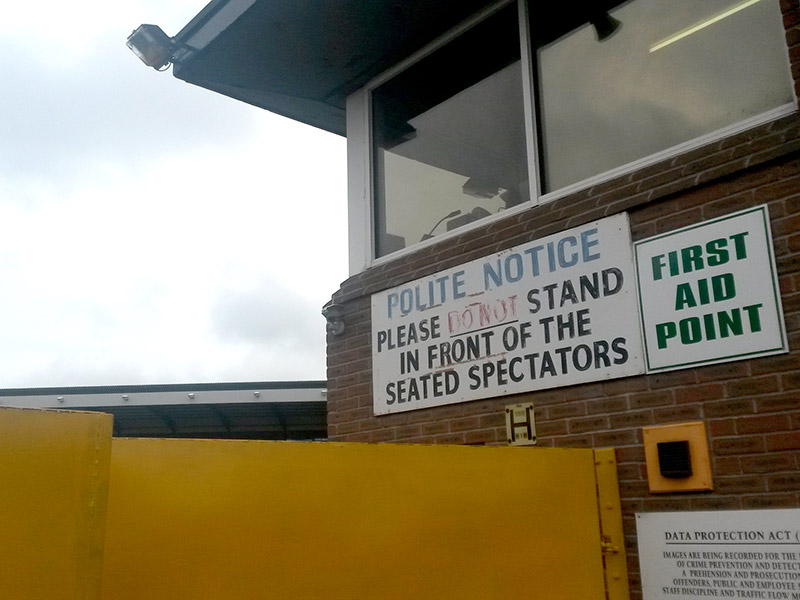 MK Dons stuck to their principals and it paid dividends, a precise through ball from Mark Randall was picked up by Arsenal loanee Benik Afobe who stroked the ball into the back of the net. The Dons doubled their lead on 40 minutes, a corner wasn’t properly cleared and the ball fell to Carl Baker who shot home from 20 yards. The Valiants restored parity before the break though. Again a move down the right caused problems, this time however the cross was controlled by N’Guessan before he tucked the ball away with real power.

The second half picked up where the first left off. MK Dons continued their neat pass and move play which lead to a penalty appeal being waved away after Afobe went down, however shortly after after Carruthers got in on the overlap he went down and they had their spot kick. From where i was sat it did look like the first appeal was more of a penalty than the second, maybe this was in the refs mind when he gave it. After a squabble over who was going to take it, Afobe who wouldn’t let go of the ball dispatched the kick. As Port Vale pushed for an equaliser there gaps where left and the away side took full advantage with substitute Danny Green tapping in after great work down the left from the impressive Afobe. Just when you thought it was game set and match Vale pulled one back, a shot cannoning back off the post onto N’Guessan who didn’t know a lot about it, but took his second goal of the game. Despite this the Dons held out to progress. The way they play the game is really a pleasure to watch and the way they stick to it regardless is admirable. Vale were fairly direct but top scorer and focal point Tom Pope was a big miss for them. 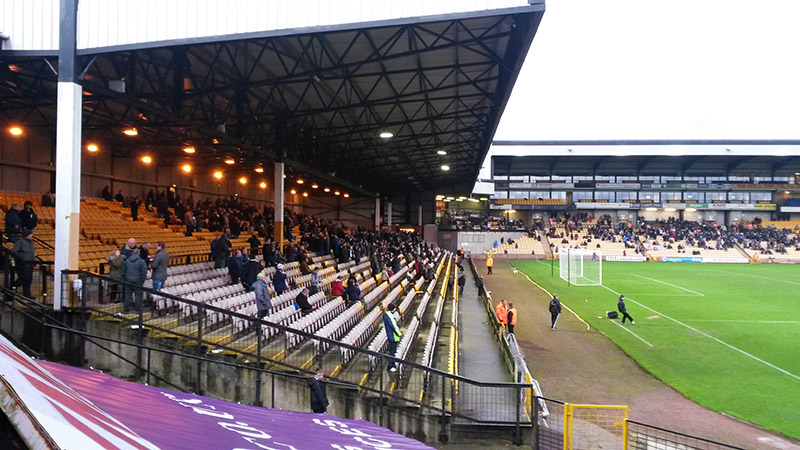 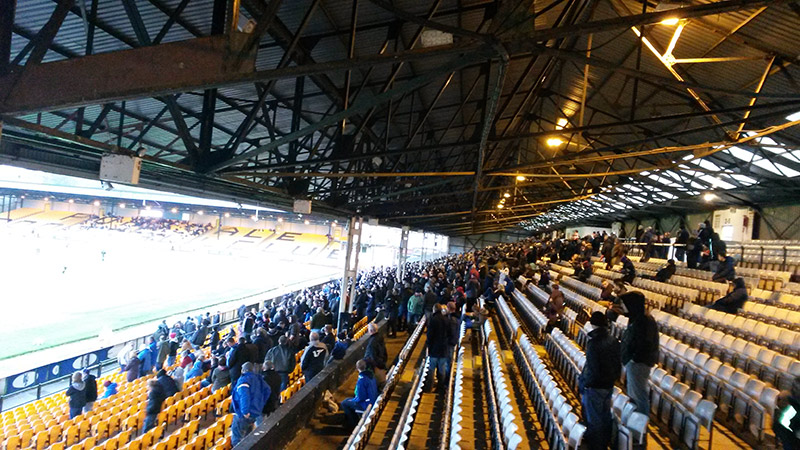 Atmosphere 3.5/5: Despite a small crowd in a reasonably sized stadium there was some decent noise generated at times, i’d love to experience a full house at Vale Park, i think it would be something to behold.

Location 3.5/5: Straight forward to find and plenty of free street parking a couple of minutes walk away.

Value for money 3/5: Ticket was good value at £15, even more so with all that happened in the match. £2 for a coffee was a bit steep, but given the game i’ll let them off 🙂

Programme 4/5: A really good read with some interesting features and good insights.

Overall 4/5: A great game, good atmosphere and a ground stooped in character and nostalgia.

You can keep up with Peter and his journey to join the 92 club on Twitter @the92dotnet and through his 92 here. Have you ticked Vale Park off your 92? Add it to your 92 and rate your experience here or plan your visit there using our away day planner here. If you want to blog about your experiences doing the 92 league grounds drop us a tweet @the92dotnet.