Lifelong Newcastle fan and the92.net blogger Colin Harrison reports back on making the mammoth journey from the North East to the South West to complete his 92.

The day had arrived for me to complete my tour of the 92 grounds. From my first ever match as a schoolboy, watching my beloved Newcastle United at St James Park to the other St James Park, Exeter. It wasn’t my 92nd league ground though but my 109th.

One night in our local, we were discussing the journey to which my mate David said he would drive us all to Exeter in his mini bus. We hastily agreed, and even decided to bring our wives along for the trip. The ladies would spend the day shopping / drinking while we went to the match. David’s geography isn’t his strong point and it was a few days later when he realised how far away it actually is.

On the Saturday morning the 4am alarm clock sounded and Paul, Adam, David and I, as well as our respective wives, jumped in David’s mini bus for our 6 hour plus journey South, totalling 360 miles. We arrived at the hotel around 11am, got checked in, said our goodbyes to the wives and headed for the ground, stopping at a local watering hole on the way. The weather was glorious, with the temperatures in the low 20’s.

We arrived at ‘the other’ St James Park around 1pm for a pre-arranged dugout photo. I’d emailed Exeter City to inform them of my attendance completing the 92, and they readily agreed to show me pitchside. When we got pitchside, the club photographer and social media manager were also there, and escorted the four of us out onto the pitch into the centre circle for another photo. This was then posted on Exeter City’s official Twitter page, we also featured on their Youtube channel and had a write up on the club website.

📸 Congratulations to @colinpodge who has today completed the 92

He arrives here today accompanied by his friends and they’ll be watching the match from the Big Bank#ECFC pic.twitter.com/O0JtTuAj7y 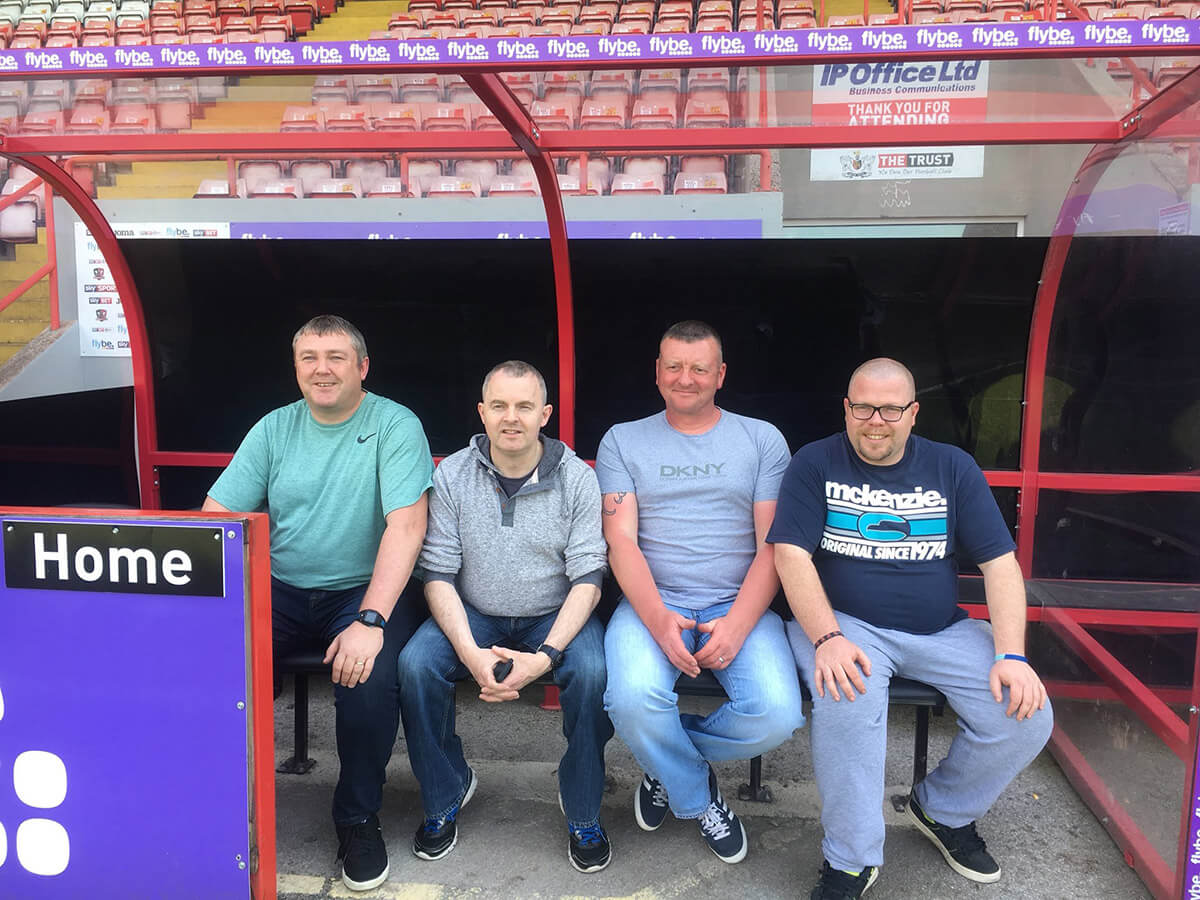 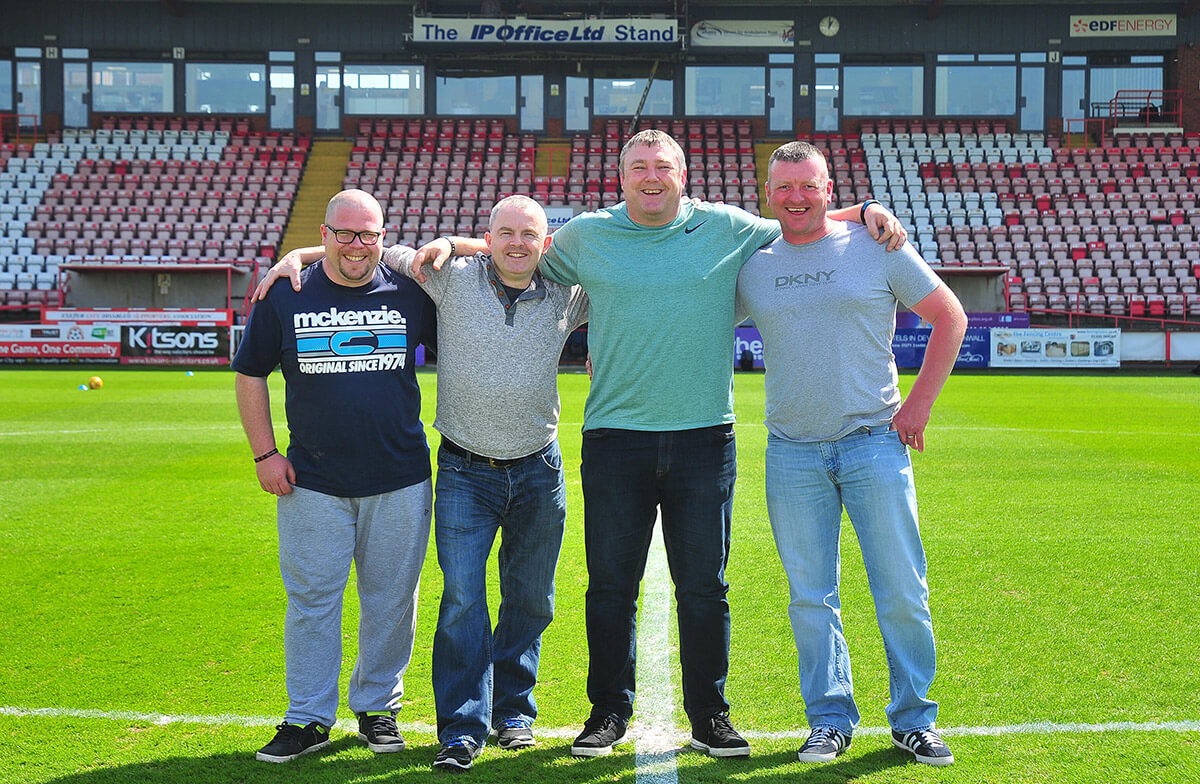 The ground is under-going a major redevelopment, and as such is only made up of two stands. The Main Stand is all seated and the ‘Big Bank’, a standing terrace behind one goal. The Big Bank is where our tickets were for. After the photos were taken we made our way back out to where the bar areas were and sampled a couple of pints of real ale. The club also gave me a free Exeter scarf to remember the day, however I could not put it on as wearing a red & white scarf is strictly forbidden in my family… 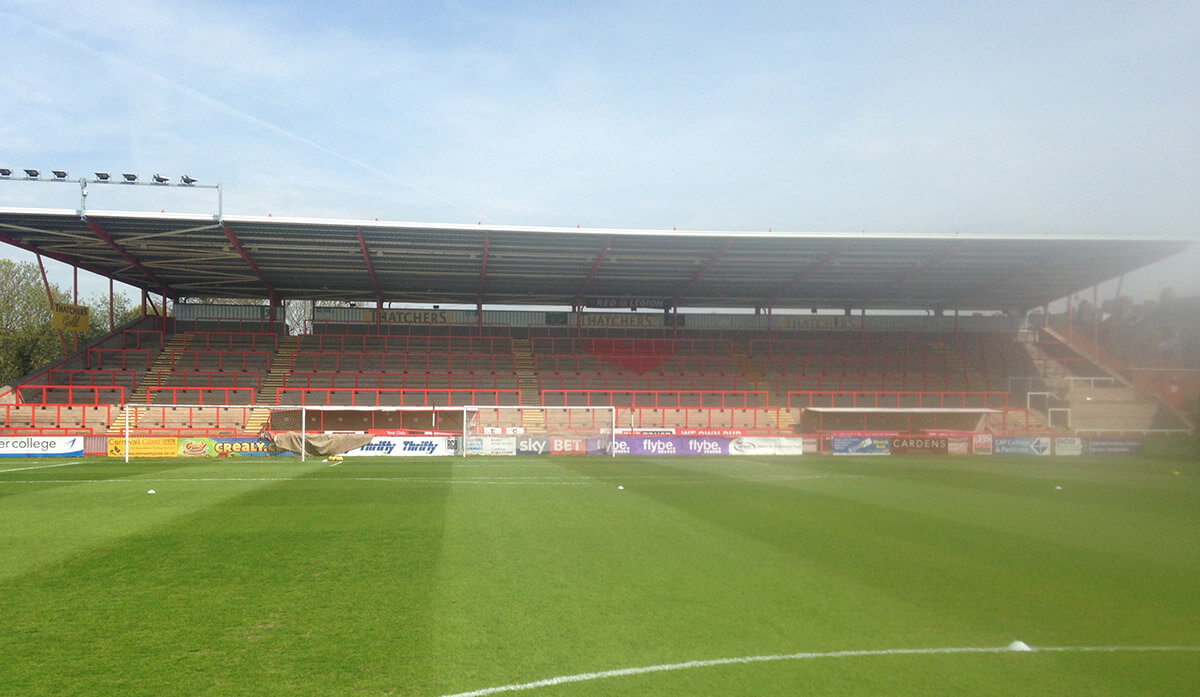 We took our places on the Big Bank, and I must say the atmosphere was excellent. The ‘Red Legion’ together with their drum ensured nothing was heard from the small away following at the other end of the Main Stand. 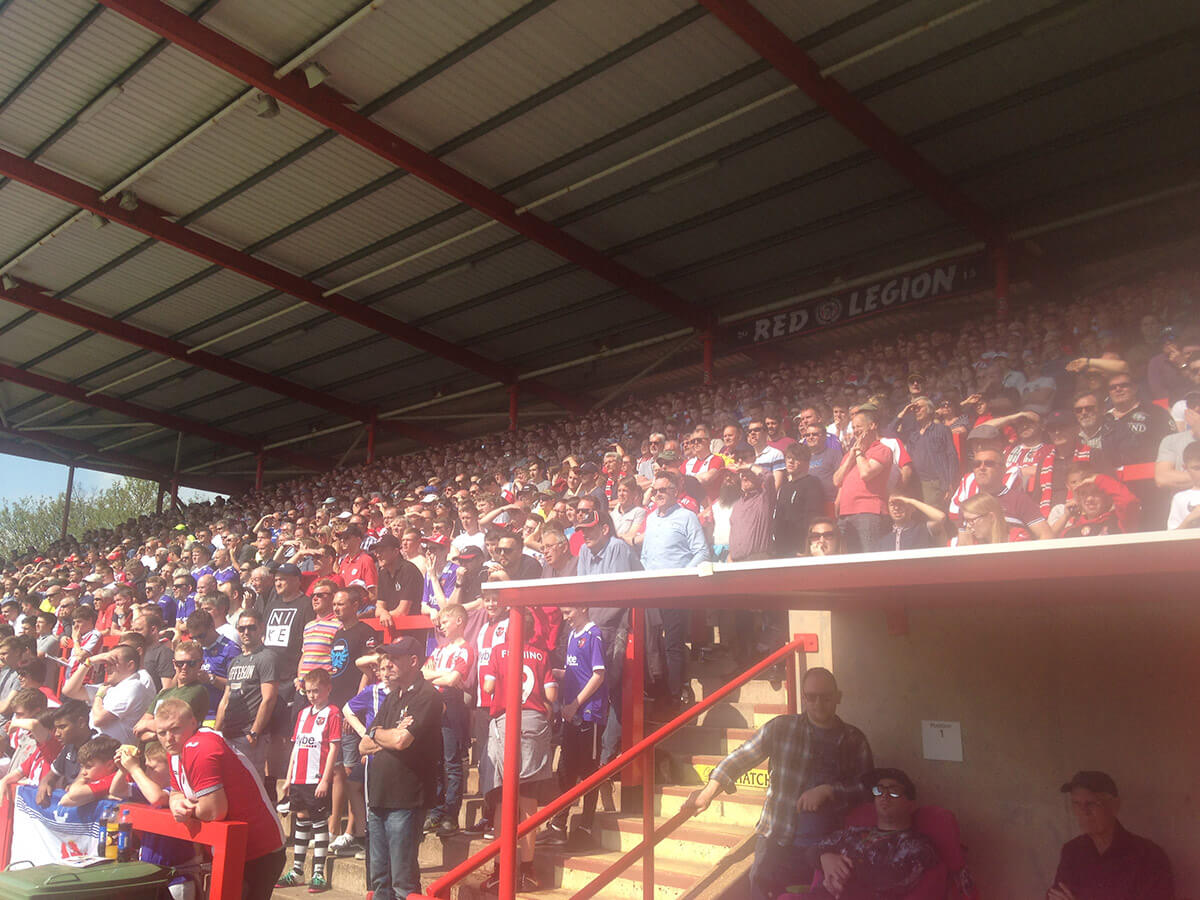 A silence fell on the Big Bank as Crawley took the lead, but with a few minutes left of the half the scores were level. Exeter took the lead on the hour mark and news of Wycombe Wanderers losing at home made the noise levels go up further. However Crawley equalised themselves and the frustration was apparent within the home support. The game ended 2-2 which was great for the neutral but not for the home supporters, as they knew this was two points dropped in the race for promotion.

The end of the game saw me howl with laughter at my mate Adam. He is a Sunderland fan, and the scores app on my phone informed me that they had conceded twice in the last few minutes at home to Burton Albion, which meant they were relegated to the third tier of English football. We walked back to the hotel to meet up with the ladies, before enjoying a night out in town.

Atmosphere 4.5/5: Great noise from the Big Bank, I’m just not a fan of drums.

Location 4/5: A ten minute walk from the centre of town, passing a couple of bars on the way.

Value for Money 4/5: £16 to stand on the terrace behind the goal was fair.

Pie Rating 3/5: It was actually a pasty, which was scorching hot.

Character 3/5: Lost a little due to the redevelopment.

Stewarding 5/5: Exceptional from start to finish.

See Colin’s complete 92 on his the92.net profile and follow him on his future groundhopping trips on Twitter @colinpodge.