Thoughts on the ground:
Eastleigh was always a ground that I had hoped to tick off – the Spitfire’s, along with a handful of other non league clubs will always have a place in my footballing heart from past Football Manager Campaigns. The club where hoping to follow in the footsteps I made in the virtual world where I made it to the Championship and they have been enjoying a rise over the the past decade and a half from the Wessex league to now be looking towards the top end of the Conference and daring to dream of joining the 92.

The ground itself is fairly small, but you can see steps are being taken to progress the ground to match the rise of the club on the pitch. In the summer new fencing was installed around the pitch perimeter – its previous being render useless following scenes of jubilation following last season’s triumph in the Conference South. Behind the goal at one end the impressive South Stand towers over the stadium which seats just under two and half thousand. At the opposite end sits a small covered terrace and the club house. Similar terracing runs, which looks fairly new runs down the far side of the ground, opposite to which is the Grandstand which was opened in 2004. 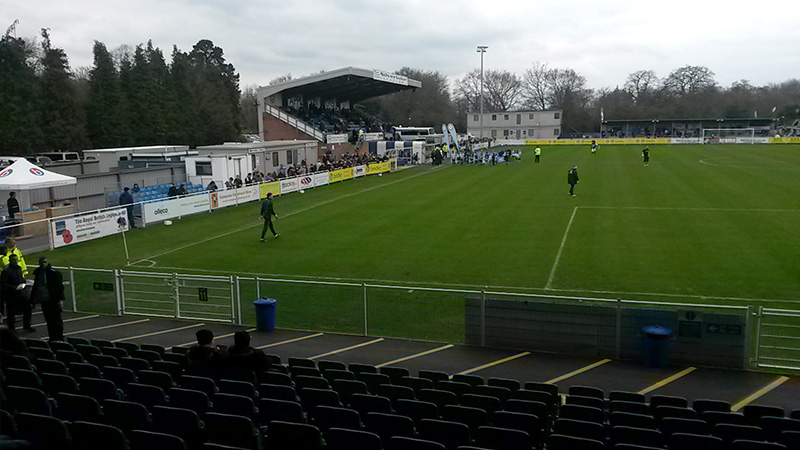 View from the South Stand towards the Grandstand

Thoughts on the game:
With the games in the Conference being staggered over the weekend Eastleigh went into the game knowing how some of their rivals had faired and with further results going to plan the Spitfire’s had to the carrot on offer of possibly being in 5th place on Easter Sunday. Looking through the home side’s squad there were some recognisable names with good league pedigree. Keeper Ross Flitney, Midfielders Ben Strevens and Jack Midson stood out along with Brian Howard – still only 32 and for me most notably former Oxford United striker James Constable who I was particularly surprised to see had dropped down to the Conference newcomers in the summer. Of the visiting squad former Fulham youth product Stefan Payne and Carlisle midfielder Solomon Taiwo stood out from the teamsheet, but i didn’t recognise any others. Dover, also promoted to the division last summer were enjoying a successful season sitting 10th prematch, well clear of danger and just short of being in with a sneak of a late play off push.

The homeside began the match with real intent and looked to get in behind early on. Besides Dover having a cross flash across the the six yard box the majority of the first half was one way traffic. Twice the lively James Constable got in behind the defence, first firing just wide and then drawing a decent save from the visiting keeper who was out off his line quickly to block and gather. Ben Strevens curled a freekick a whisker past the righthand post and striker Craig McAllister should have scored racing through only to fire straight at Walker in the Dover goal who again was well positioned. 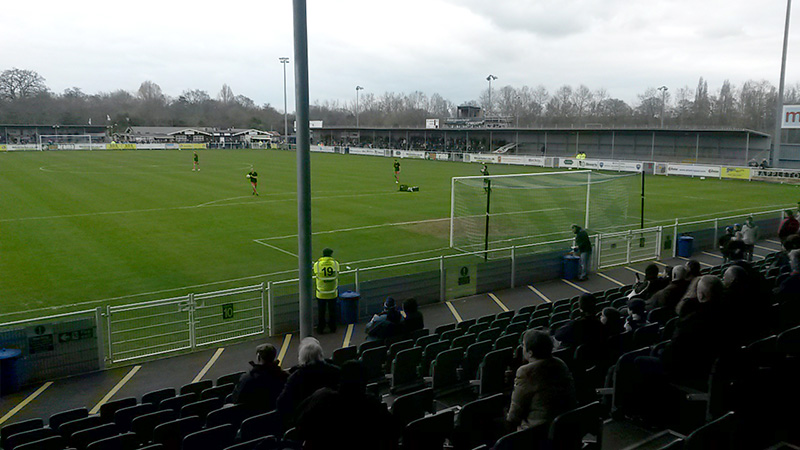 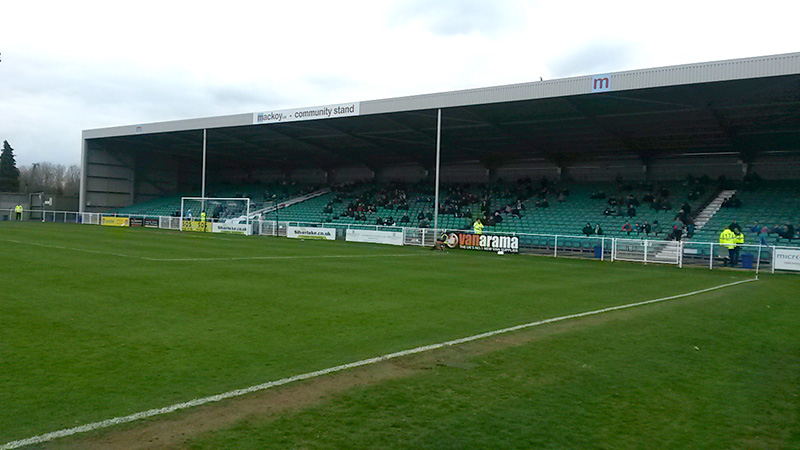 It seemed that if the game continued in the same fashion then it was just a matter of time before Eastleigh took one of their chances, but it didn’t arrive. The play in the second half became far less fluid and rather disjointed as the back three of Dover held firm and frustration grew in the home side’s ranks. Constable managed to wriggle through again, and slightly off balance hit a powerful shot which cannoned off the bar. The numerous spurned chances came back to haunt the Spitfire’s as Dover executed the perfect smash a grab. With their first corner of the game after 71 minutes centre half Sean Raggett powered in an unstoppable header.

Eastleigh did carve out an opening to grab a point as the ball fell in the box to Constable. However his slightly sliced effort only rippled the side netting. Aside from that a half effort from a dangerous freekick was helped onto the post by Mitch Walker in the Dover goal as they held on for the three points. Eastleigh shouldn’t be too disheartened from today’s game, they played really well in patches and carved out enough chances to win the game. Slightly better finishing and / or better decision making would have ensured the win. If I had my critical hat on I would have said a bit more width especially second half when they were pushing forward would have helped. But with a game in hand they are still well in the race for the final play off spot.

Atmosphere 3.5/5: For a crowd of just over 1700 the noise was decent – particularly in the first half with the home supporters with the drum in the south stand.

Location 4/5: Easy to find and close to the motorway, with plenty of free parking at the ground.

Programme n/a: Didn’t see one but sure they were available somewhere.

Stewarding 5/5: Like with all good stewards, similar to good children – seen but not heard! Non league is a different world, with no segregation, standing generally accepted and fans switching stands at half time there’s never normally an issue so the stewards didn’t have a lot to do.

Overall 4/5: A good day out, with an earlier arrival I would have headed to what looked like a very welcoming club house to catch the early kick off – the enticing tweet with hashtag cheapbeer is an advert for any fan! If you get the chance the Silverlake is definitely worth a go 🙂

You can keep up with Peter’s 92 on his the92.net profile here. Do you fancy blogging about your experiences doing the 92? If you’re interested drop us a tweet to @the92dotnet.