Groundsman: You are heavily involved in football nostalgia and ground hopping websites. What sites do you run, and why did you start them?

Han: I was an overseas contributor of photographs for www.footballgroundguide.com in its embryonic stages, having been alerted to this brainchild of webmaster Duncan Adams in an English Saturday newspaper in the nineties. I contributed with photographs from my private collection to build content and assisted in shaping the subsection about ‘lost but not forgotten’ at the Old British Grounds and stands.

I started The Beautiful History to share my passion for the history of club crests, colors and nicknames. In fact, it is a manuscript for a book that unfortunately was never published, here is what happened. 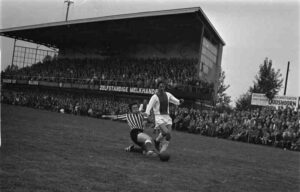 The ground of PEC, De Vrolijkheid, where his ground hopping adventures started.

I have an obsolete blog which charted El Gouna FC, a team from the Egyptian Red Sea resort, and their fairy tale rise of to the Egyptian Premier League which you can read here.
I also did a catalogue of Egyptian football ground here. Finally, I also recorded El Gouna FC’s history here.

Groundsman: Where did the ground hopping all start for you?

Han: I followed my hometown PEC from Zwolle from the Netherlands, both home and away. They played at ‘De Vrolijkheid’ before moving to the ‘Gemeentelijk Sportpark’, aka ‘De Ceintuurbaan’, aka ‘Oosterenk Stadion’ and now aka IJsseldelta Stadion.

Groundsman: When did you realise you were hooked?

Han: The moment I first passed the entrance to a football ground in my hometown Zwolle, I was transfixed by the main stand and the open terracing. Not long after I attended, with my father and my older brother, The Netherlands vs Switzerland in 1962 at the Olympic Stadium in Amsterdam. I was 8 years old at the time. I have no recollection of the score, the goal scorers or the run of play. I do remember, however, all too well the travelling Swiss support, equipped with massive cowbells, making a deafening serenade outside the stadium, prior to the match. 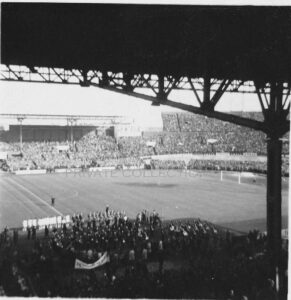 Olympisch Stadion Amsterdam in 1962, the scene where Han got hooked.

I also vividly recall walking up the interior stairway of the main stand; my father holding my fist in his hand; such tense was I in the sheer anticipation of the sight of a full stadium unfolding.
Once we reached the top of the stairs, with the full stadium in sight, I was a very young boy from a country province, physically in tears; such was the overwhelming panorama. My father and older brother had to comfort me. I cherish that intense emotional moment with my father and older brother until today.

Groundsman: Given you are from the Netherlands, where did your passion for the 92 start ?

Han: It all started with the TV coverage of the 1966 World Cup. The sheer size and shape of a compact, brimming, Goodison Park… I did not know what hit me at the time.

Groundsman: What was the first of the 92 grounds you ticked off your list? 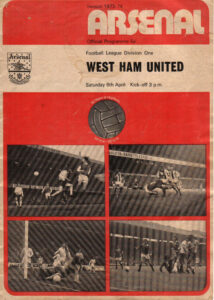 Han: Highbury on Saturday 6 April 1974, standing on the North Bank to see a 0-0 draw with West Ham United in the old 1st Division in front of 37,868. I was transfixed, the moment I left the underground station. I cannot recall the atmosphere, the standard of the game or even the strip West Ham United played in. What I do recall is that I only gazed in trance and admiration at Charlie George, wherever he went.

Groundsman: When did you join the 92 club?

Han: I completed the 92 at Boundary Park on Saturday 19th of April in 2003, to see the home side beat Chesterfield 4-0 in front of 6,885, in the company of three Dutch soulmates and Duncan Adams. The first time I set my eyes on Boundary Park, April ’92, I knew I wanted to finish there, just hoped the ground wouldn’t change much through the years. Fortunately, it didn’t, and was a perfect ending to a wonderful challenge.

Groundsman: Which ground was the favourite of the 92 during the course of your journey?

Han: It has to be Deepdale before redevelopment because it encapsulates everything I love about British football grounds. Terracing on all four sides, a barrel roof, a main stand with a wooden interior and a paddock, pillars obstructing the view, mural paintings summing up the club’s history in the pavilion stands, a pre-match pitch meeting with the legendary Sir Tom Finney and Whitney Houston’s ‘I will always love you’ over the tannoy when leaving the ground. Very impressive.

The Deepdale west stand, with the barrel roof, pre development in the 1990’s.

Groundsman: And your least favourite of the 92?

Anfield; it did not live up to high expectations. The only interesting aspect at the time was The Kop in ‘standing modus’.

Groundsman: What are the lasting memories of your travels?

Han: There is no specific memory that tops the rest. Some memories may have been the best in their own category. Meeting Sir Tom Finney on Deepdale’s pitch and the atmosphere at Ibrox for the Old Firm are moments to savor. Preston North End walking out at Wembley, a minute of deafening silence at Anfield to commemorate Hillsborough and Brighton’s last home game at The Goldstone are also momentums to cherish. 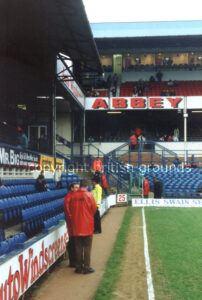 The Baseball ground, a terrifying experience, but in hindsight a lot better!!

Some were funny, and some were frightening. As an adolescent on the other side  of the water, one could only try to imagine the thrill of what it must have been like standing on an absolutely jam-packed terrace, your feet not touching the ground, people pushing up to the front with every goalmouth action.

I had always craved to be part of it one day. On Boxing Day ’92 I visited Derby County vs. Portsmouth and stood in the mid-section of the Co-Op stand at the Baseball Ground. One hour before kick-off, I was unaware what was in store for me. By 3 pm my dream had fast turned into a nightmare. Thousands were boxed in and cramped into what, to me, looked like a cage. So there I was, stood, hardly able to move or breath, my feet barely touching the terrace, swaying up and down to the back and the front. But the worst was yet to come. When Derby County scored the section I was in literally exploded. After the celebrations, I found myself twelve steps lower, in the process losing a scarf and even one of the gloves I was wearing. To be quite honest, I was absolutely petrified. At half-time, I managed to squeeze out and was transferred to a seat opposite main stand. Looking back, how horrifying it may have been, strangely enough, I now consider it to be one of the best experiences on my travels.

Not the best but the most exciting match has got to be Carlisle United vs Plymouth Argyle on 8 May 1999 when goalkeeper Jimmy Glass scored a 95th-minute winner to keep Carlisle United in the League. 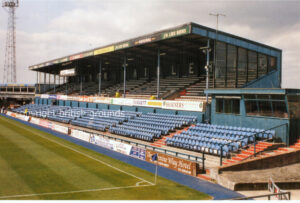 Groundsman: What was the funniest experience on your travels?

Han: A bizarre incident occurred on Saturday 14th of April 2001. Macclesfield Town vs Rochdale. I install myself first row opposite the main stand. My travelling companions are behind me, second row. The seats to the left and right of me are completely free. I make myself comfortable with today’s match magazine and tiny earphones to follow the league results elsewhere. The first half in underway, around the twentieth-minute mark. A Macclesfield defender intercepts a Rochdale attack and kicks the ball out of play. It hits a valve of and unlocks the sprinkler system, beaming water with the power of an aqua gun of an armed forces vehicle.

I’m virtually shot out of my chair and get entangled in the wires of my earphones, desperately trying to escape the drenching, much to the entertainment of the entire ground and players. Eventually, I managed to escape the soaking wet. A very kind steward comes to the rescue and accompanies me to a first aid station under the stand to wrap me in towels. Five minutes later I return to my seat under a rapturous reception from the crowd. 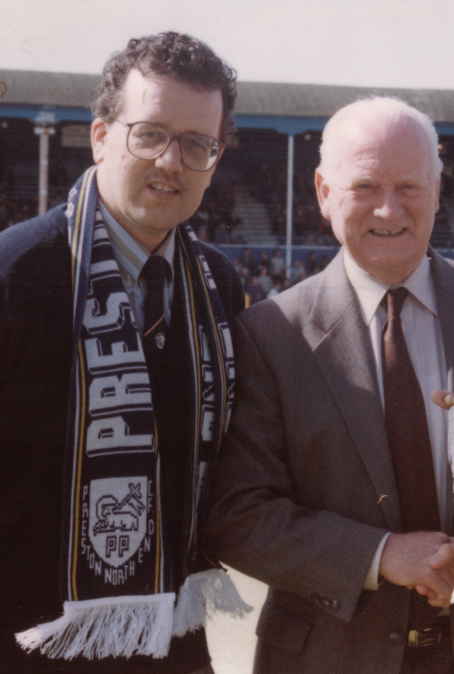 Han meeting with Tom Finney, on the pitch at Deepdale.

A few years later, there’s a small anecdotal reference to this incident in Life Sentence, published by a Rochdale journalist and life-long supporter, putting his memories on paper.

A couple of years after on Saturday 25 January 2003 and I am Spotland as Rochdale host Coventry City in the FA Cup 4th round. I’m in the home end with my travelling soulmates from Moss Rose. “Ah, so you are the bloke who got soaked in Macclesfield”… and the rest is history.

Groundsman: What future groundhopping plans do you have?

Han: I have watched Preston North End home and away in division two, three and four, the league and fa cup, and divisional playoffs. In the event Preston North End would play at top flight level again, I would like to take in a double against another founder member.

Groundsman: Finally, as we all know the 92 can sometimes only last a season if relegations and promotions go against you – who are you looking to come up from the Conference, to complete the 92?

Han: Aldershot, although it’s not my ambition to refresh the 92 after having completed it at one stage.