Blogger and the92.net co-founder Pete reports back on an unforgettable experience getting behinds the scenes access to the #NonLeagueChallenge at Steel Park.

Usually for me pre-season is a quiet time. Balancing doing the 92/ground hopping with work/family/life in general I tend to spend the time planning, banking my football chips for when the season starts.

However there was a date that kept cropping up that confronted this notion. After doing an interview with the guys from ‘Play with a Legend’ earlier in the season they mentioned an initiative they were involved in called the Non-League Challenge. In a nutshell it’s a competition run by Marathon Bet to find the best goal celebration in non-league. And the prize: £10000 and a home game against a star stubbed team of Premier League legends.

This year’s winners were Corby Town FC. They bagged the prize after their defender Jason Lee polished off a pint he found on the hoardings while the team were celebrating a goal. The day would prove to be massive for a club in Corby Town that had experienced back-to-back relegations. On top of the £10000 prize money they also pocketed 90% of gate receipts and cash from refreshments/merchandise etc on top of great exposure in the press and on social media.

Fast forward to a fortnight ago and I received a message from our good friend the Stadium Hoppers. They had organised some filming with some of the legends and wondered if we’d like to come along…wow!

As the days passed and the confirmed names kept coming I felt like a child again. When I first started going to football in the mid-nineties I used to like to get autographs. This would be a prime chance to get some signatures from the Premier League players I grew up watching, not to mention getting to see them take to the turf again.
But there was one name in particular that stood out…Emile Heskey. Those that have known me over the years are well aware of the sometimes unhealthy obsession I’ve had for the talents of the Heskeylator. Often mocked by the media and fans I always felt the need to stand up for a player that I thought was significantly undervalued. I mean England used to get into quarter finals with the big man up top, now we can’t even get out a group!

Apologies, I digress. So the evening before the game was spend rummaging through the loft digging out stickers and trading cards from my youth in the hope of getting them signed. They were carefully packed along with my 2010 World Cup England away shirt adorned with ‘Heskey 21’, I was all set.

I headed off from my base in the East Midlands taking just over an hour to breeze down to Corby Town’s Steel Park. Meeting Richard from the Stadium Hoppers we headed in the ground with no idea of how the day would go and who we would get a chance to meet. 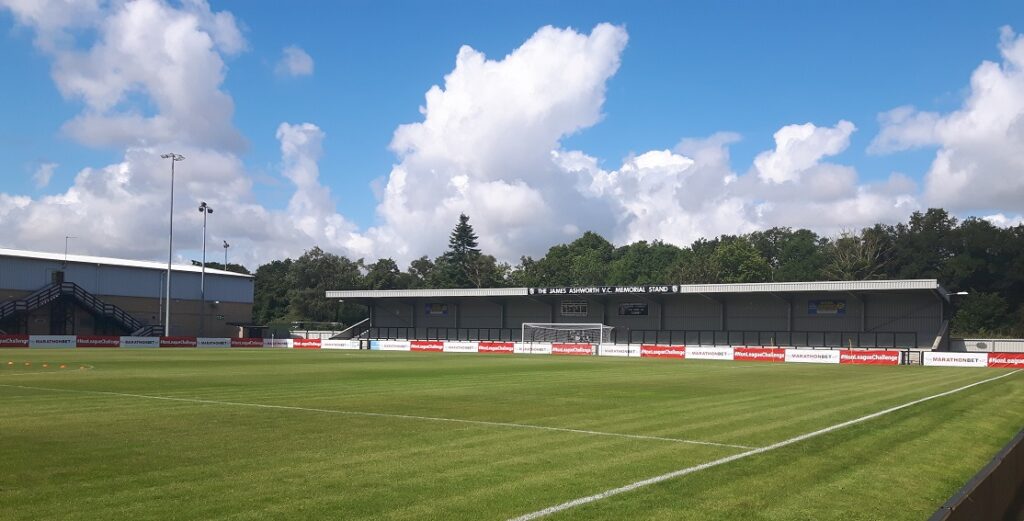 Despite some heavy rain over the night the pitch was looking in pristine condition. Steel Park is still under a decade old having been opened in 2011. The tidy ground features 2 stands; a seated stand spanning around a third of one touchline and a terrace behind one of the goals. The remainder is standing around the perimeter fence and there’s plenty of space to mill around with your pre-match beer and burger.

As we entered the building with the changing rooms etc we were greeted by the lads from the Non-League Challenge who filled us in on the filming. They had arranged for Peter Reid and Mark Crossley to do a Q&A about grounds throughout their career, using one of the Stadium Hoppers scratch maps, in the legends dressing room; amazing!
Next we were shown in to the dressing room to get set up and who would be casually sitting in the corner, none other than World Cup winner William Gallas! This indeed set the tone for the day. We had a quick chat, photo and autograph before the fire alarm sounded. We headed out to the car park and remained there while the legends started to arrive. I managed to get some cards and stickers signed as they went in but as the time went on the players had to get in and we were told there would be opportunities later…the Heskey shirt would have to wait.

Behind the scenes in the Legends dressing room 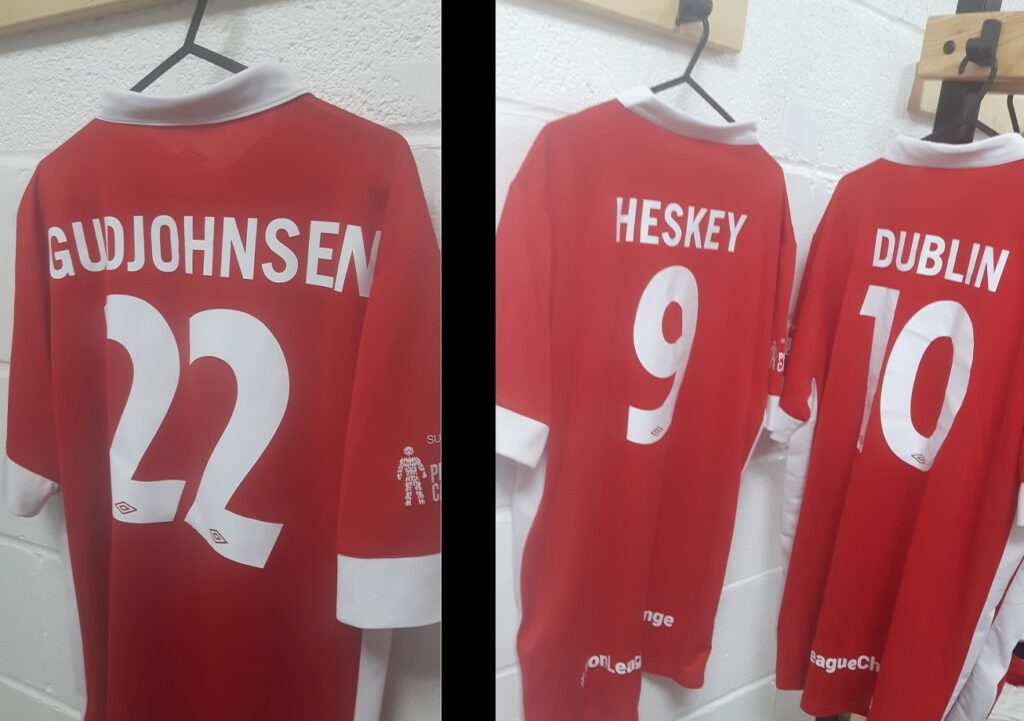 With an hour and half to go before the game, with our access all areas wrist bands we headed back in and were pointed to the bar. Little did we know but this small room was where all the legends would be, having a coffee, sitting around chatting about old times, jackpot! With the legends to general public ratio at around 80/20 it was a great chance to get autographs and all the players were happy to oblige. I even got the chance to meet Emile Heskey, get my shirt signed and a photo.

I felt like I was a kid again, it was truly unbelievable and very surreal to have such access to such big names.
The legends gaffer was Peter Reid. The former combative midfielder had the task of picking a starting line-up from a squad also including the likes of Mark Crossley, Nigel Winterburn, Trevor Sinclair, Ian Harte, Chris Waddle, Danny Murphy, Dion Dublin and Kevin Davies. Reid joked the latter only made the bench after his pre-match assault on a plate of biscuits. 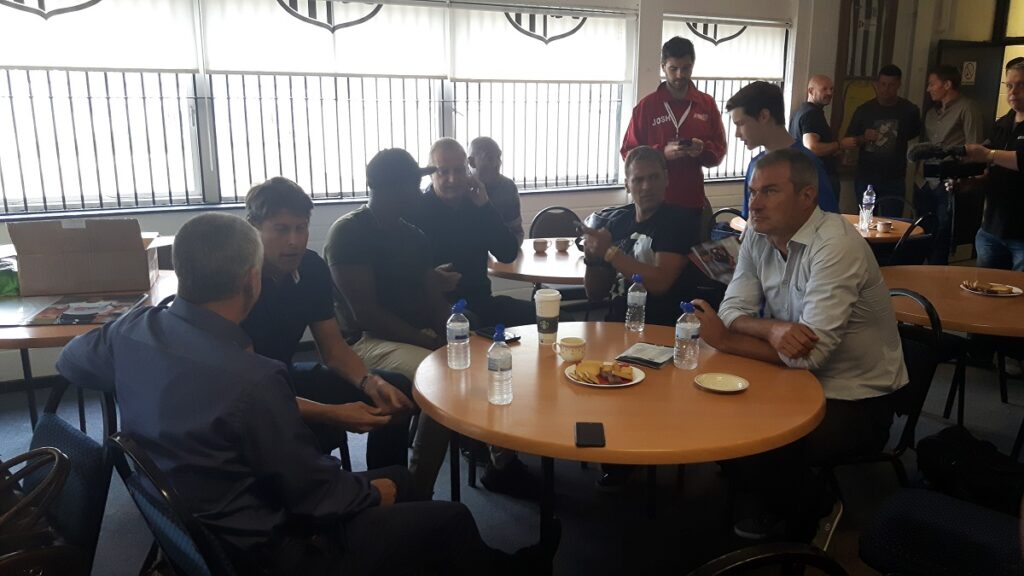 Heskey, Anderton and Winterburn amongst others in the foreground. Danny Mills and Matt Holland in the top right corner

The squad also had a Scottish contingent. Corby has a large Scottish community from migrant workers who came south for the steelworks. To help entice the locals the Non-League Challenge had managed to recruit former Old Firm players Stiliyan Petrov, Dion Dublin, Alan Stubbs and Stanislav Varga and ex-Scottish international Matt Elliott. 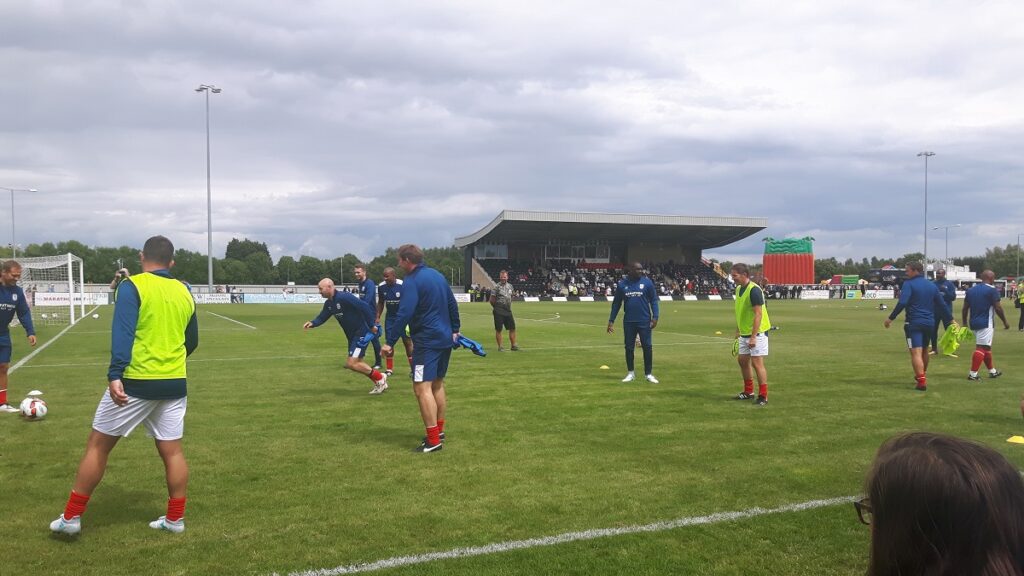 The Premier League Legends are put through their paces pre-match

The game itself was fairly even in the first half, although Corby had the majority of the chances hitting the woodwork twice and scoring twice. The legends got back into the game as half-time approached. Eidur Gudjohnson played a key part in the move carving open the home defence to release skipper Matt Holland who calmly finished.
And the former Ipswich man could and should have equalised as the heavens opened. Receiving the ball 10 yards out his low drive was blocked on the lined at the Steelmen threw bodies in the way. 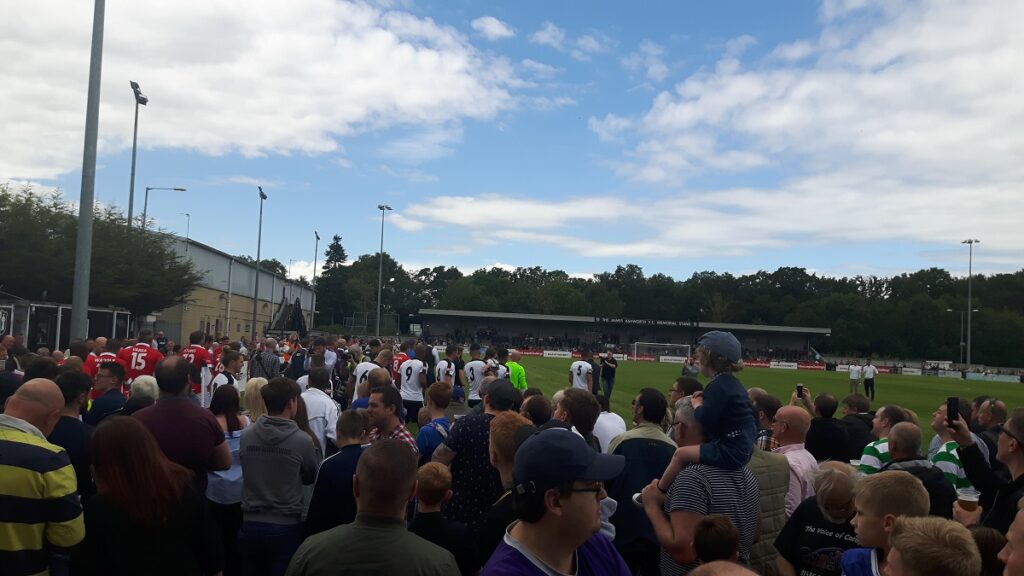 In the second half the younger blood of the Evo-stick North side begin to show as they exploited the likes of Alan Stubbs and Matt Elliot in the legends defence. There were moments to savour for the Steel Men, particularly the sub left back who left William Gallas in a daze with 5 or 6 step overs before slamming past Mark Crossley.

With the game seemingly gone the Legends did have the chance to make the score line a bit more respectable. Substitute Emile Heskey was cruelly scythed down whilst in the midst of a powerful run into box. Trevor Sinclair took the spot kick, but despite doing the keeper with his eyes he sent his penalty well over the bar. 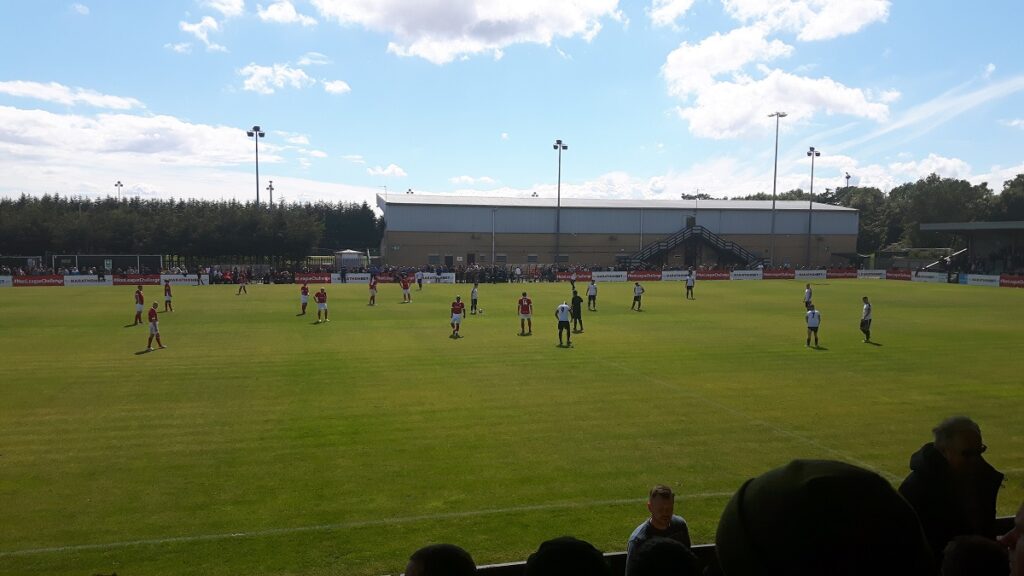 And that was that, Corby Town ran out 6-1 winners. Despite a 1 or 2 nippy challenges from a couple of young home subs in the last few minutes the game was played in great spirits.

We made our way back into the bar where most of players made a post-match appearance. Again they were happy to give autographs, have photos and a chat over a post-match pint. I was even able to get a Premier League ball that I’d won on the Carling Tap App signed by Eidur Gudjohnson, Dion Dublin, William Gallas, Matt Holland, Danny Murphy and Matt Elliott.

Richard managed to grab a few of the legends to take a look at the Stadium Hoppers map and scratch off some of their favourite grounds too. Impressed with the concept Peter Reid among many scratched off the Stadium of Light and Mark Lawrenson went straight for Deepdale. Eidur Gudjohnsons’ favoured grounds of Old Trafford and Stamford Bridge had been scratched off though, when asked to scratch off his worst instead surprisingly went for the Macron!

Kevin Davies, Peter Reid and Mark Lawrenson all scratch off their favourite grounds

All in all it was a fantastic day and one that will live long in the memory. As a fan it was a chance to meet some of the stars I grew up watching from the stands and on TV but for Corby Town is was much more. I’ve not been able to find the final attendance figure yet, but they were estimating around 1800, which is fantastic considering usually they’d be looking in the few hundreds for a match.

Hopefully this will help boost gates for the current season as well as the playing budget. Thanks to Corby Town for hosting such a brilliant day and we wish them best of luck for the new season.

You can keep up with Peter’s ground hopping adventures on his the92.net profile and on Twitter @the92dotnet.