The debate is intense, fiery and fierce: should you actively fund MK Dons, the breakaway republic of Wimbledon FC, and visit stadium:MK on your quest to the hallowed 92 football league grounds? We look further into the Phantom Derby.

I have had a healthy debate with several people on their quest for the ‘91’ who aren’t even acknowledging the existence of MK Dons as part of a 92. These guys were Hull City, Darlington and West Brom fans. They have no allegiance to Wimbledon. Just resolute morals of right and wrong in football and they have disregarded MK Dons. I’ve even had a heated discussion with Americans, whilst sat in a bar in Los Angeles, about the existence of MK Dons. Challenging the culture of the sport and team ethics that are Imperial to each empire either side of the pond, it was evident that this is a problem on a global scale. 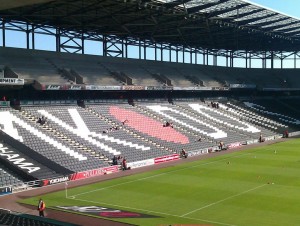 A visit to Stadium:MK

I’ve been to stadium:MK. An opportunity was presented to me by a friend to go and see Ghana. They played Latvia in a warm up before they rompped to the Quarter Finals of the 2010 World Cup finals (before being halted by the antagonist Luis Suarez). The game was to be held at stadium:MK. My moral reasoning was that it wasn’t to see MK Dons. It was an international friendly and the ticket was £10. Marginal justification and this agreed with my morals. 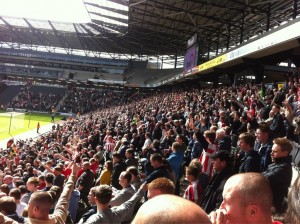 However, two years on, the subject has been propelled to the forefront of the media circus. MK Dons will play host to AFC Wimbledon in an FA Cup Second Round game; the first meeting of these two teams.

The emotion that this has stirred is unquestionable. For those not in the know, Wimbledon, in the Championship at the time, had their roots uplifted and moved 80 miles north from the upmarket suburb of South West London to the roundabout riddled concrete commuter town of Milton Keynes in 2003. In protest, the fans started their own team, AFC Wimbledon, and started in the 9th Tier of English football in the Premier Division of the Combined Counties League. 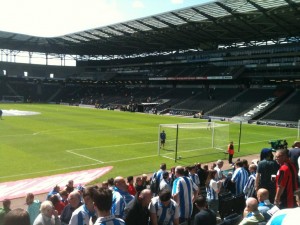 Huddersfield visit Stadium:MK in the League One play off Semi, pic from @B4RN35Y87

Football fans are a passionate bunch at the best of times, but this has enough boiled emotion to make a witches recipe. The majority of AFC Wimbledon fans don’t recognise MK Dons as a team, yet are drawn to play them in the FA Cup. How does this work? Well, some are boycotting the game.

However, the most notable success of the ‘original’ Wimbledon team was the emphatic victory over Liverpool in the 1988 FA Cup Final, the one trophy they fought hardest to claim rights to stop following the franchise of MK Dons. AFC Wimbledon could reach the third round of the FA Cup for the first time since the phoenix team was created; which would be a magical occasion.

So what do you think? Is this the Phantom Derby? Are the AFC fans right in their objection? Or should they get behind their team, let bygones be bygones? Should the move have ever happened in the first place? If Pete Winklemann and his merry men wanted a football team, why not just start at the bottom and work their way up? Just like AFC have anyway? On a more jovial note, could there be a paradoxical quantum physics event? Upon the referee starting the game, a weird shift occurs in the time space continuum. The likes of Vinny Jones, Efan Ekoku, Hans Segers, Øyvind Leonhardsen and other lifers of the Crazy Gang appear and all the other players melt away to other teams in a butterfly effect moment? We are interested in hearing from those passionate fans. So let us know your thoughts via twitter or on our Facebook page here.