Blogger and the92.net co-founder Pete was on the 92 trail for first time in 2017. Greater Manchester was the destination as Bradford City made the trip down the road to face Oldham Athletic.

Approaching the final 20 doing the 92 even the closest grounds left are now into 3 figures for mileage each way. One of the shortest left was a 208-mile round trip to Oldham’s ground; SportsDirect.com Park or to give it its ‘proper’ name Boundary Park.

When it rains it pours

With heavy rain falling from the early hours and not due to stop until midday I set off early doors. In case of a postponement I wanted to allow enough time to get to another game if the worst was to happen!

However, my fears were premature as upon arrival in Oldham the showers had passed and the pitch was in no danger. Arriving on the early side before 12 I was able to bag a free street parking spot on Sheepfoot Lane, a minutes’ walk from the ground. Be wary when you go that outside of this road in the residential areas around the ground there are parking restrictions. 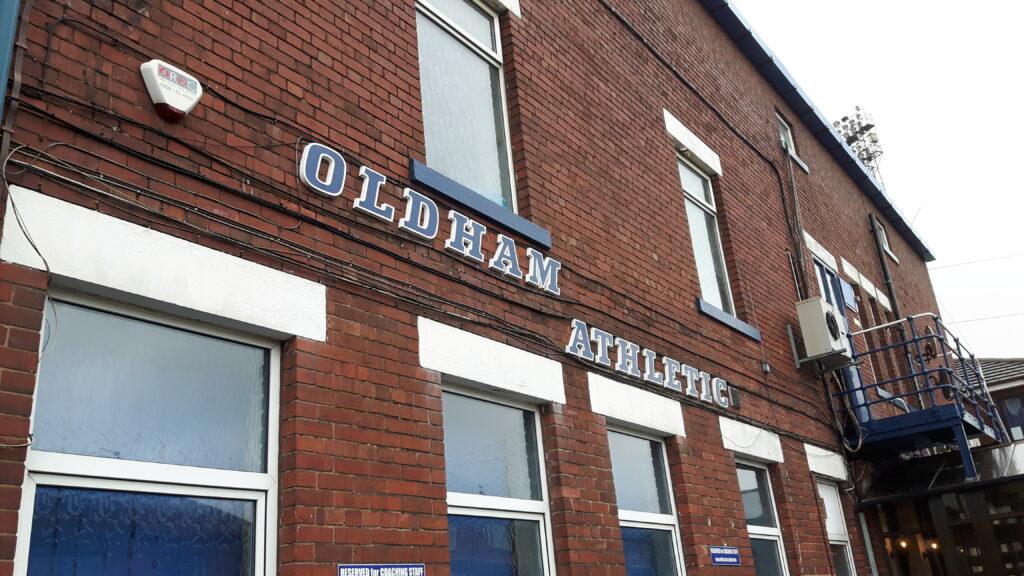 The back of the Main Stand

With plenty of time to spare I set off to explore the ground and my what a ground it is. One that aside from the new North Stand doesn’t look like it has changed much since one of my earliest footballing memories. When I started getting into football in the early nineties Oldham were in the Premiership, part of my first Merlin Sticker Album and won one of the maiden thrillers in the newly formed league; a 4-3 against my team Southampton.

Anyway back to the ground and the new North Stand, which is still being completed in parts. With facilities such as an events centre, gym and Sports Direct outlet/club shop it will provide the club with new revenue streams in years to come (*I’m not sure if Sports Direct get a cut from the profits of this income). To the right of this is the Chaddy End, which houses the away supporters. Its distinctive white gabled roof with the wording Zen office displayed across the top slopes down to cover the stand and provides great acoustics for the away end. Today this would be filled with approaching 3000 fans making the journey from Valley Parade. Behind the opposite goal is the Rochdale Road End where the hardcore Latics fans are positioned and in each corner sit large traditional style floodlight pylons (keep your eye out for those on a #FloodlightFriday soon!). 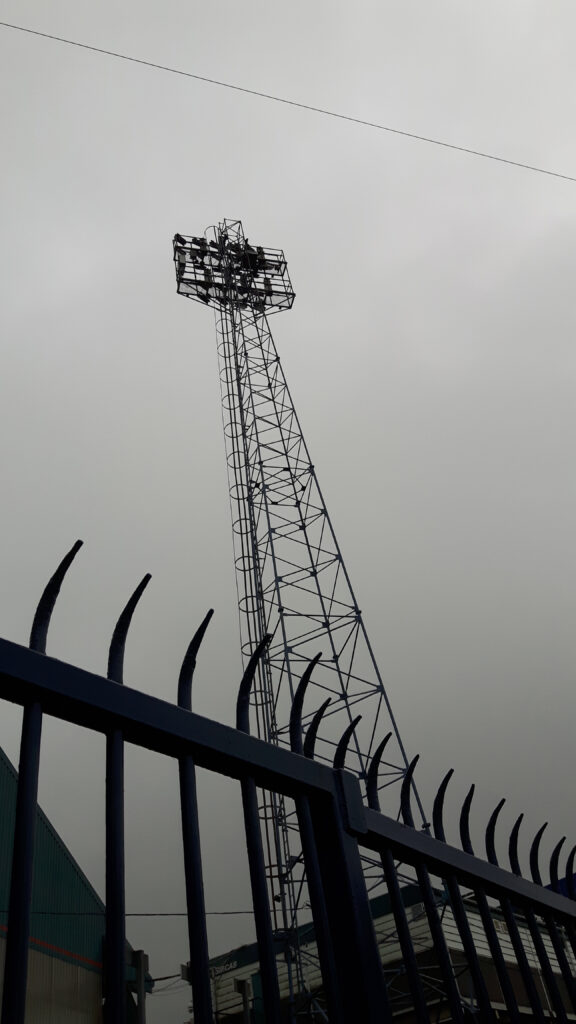 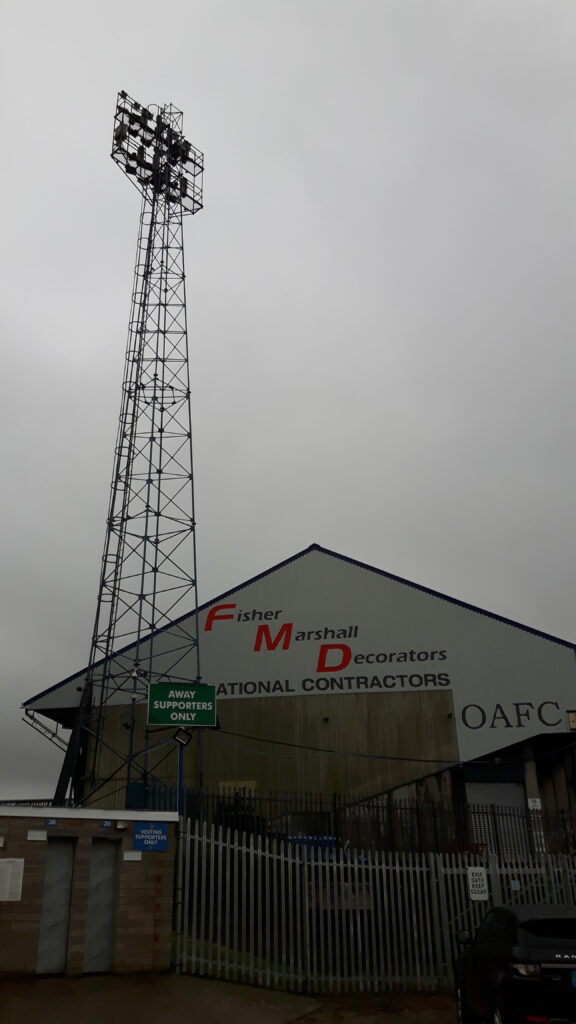 Finally, there was the Main Stand, which would be my choice of location for the game. In trips to the Matchroom Stadium and Home Park earlier this season I had regretted not choosing to go in the older stands and didn’t want to make the same mistake again. The Main Stand is made up of 2 tiers, either side of which are 2 small parts of terracing left from when the lower tier was standing. Unusually the dugouts are located at the back of the lower tier and include a real wooden bench, no bucket seats to see here! The concourse reminded me of the Bullens Road Stand at Goodison Park with a number of quirky areas with painted brick work and the odd low ceiling including the bar (I think called Frizzell’s Bar). 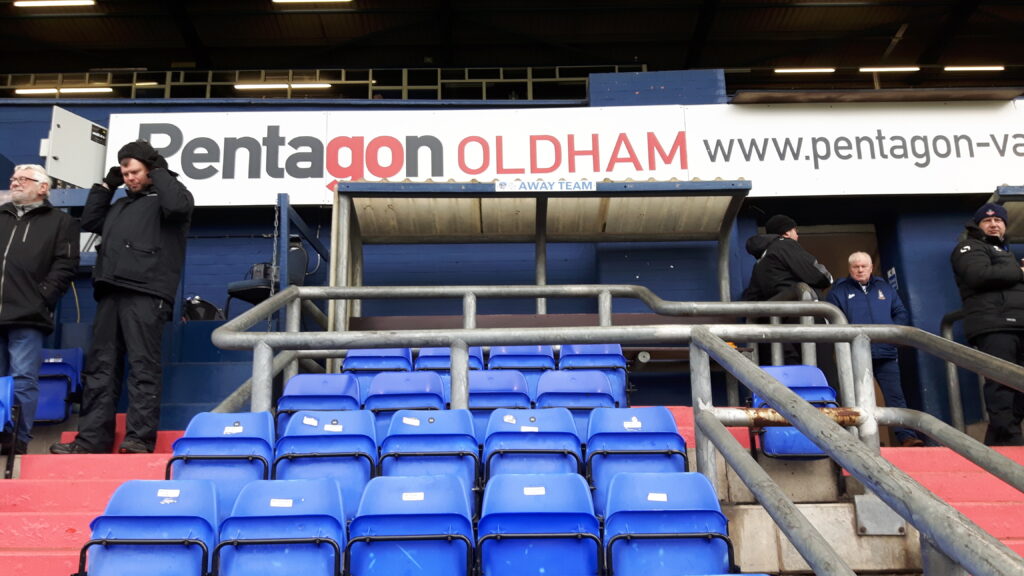 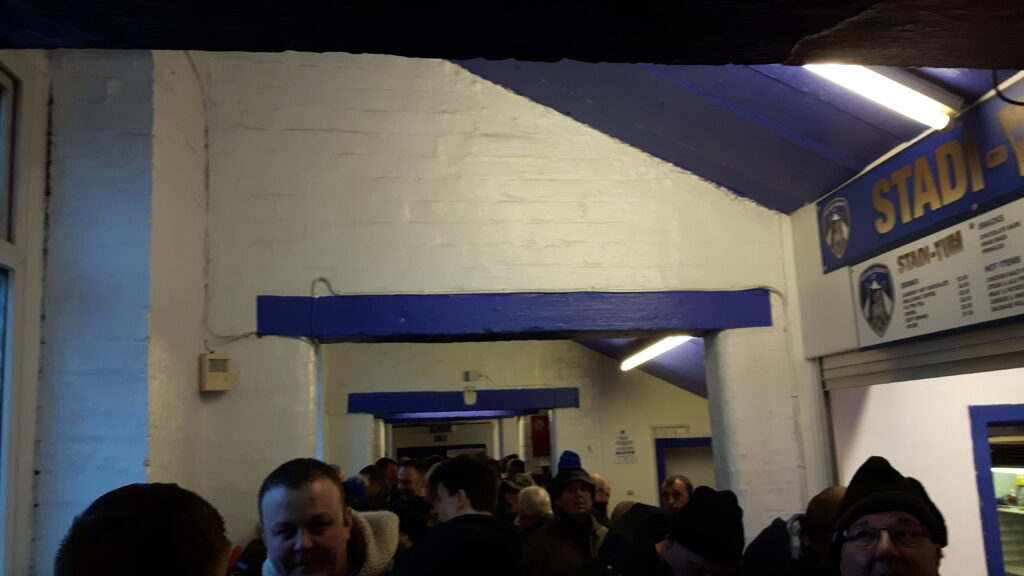 The bar area in the Main Stand 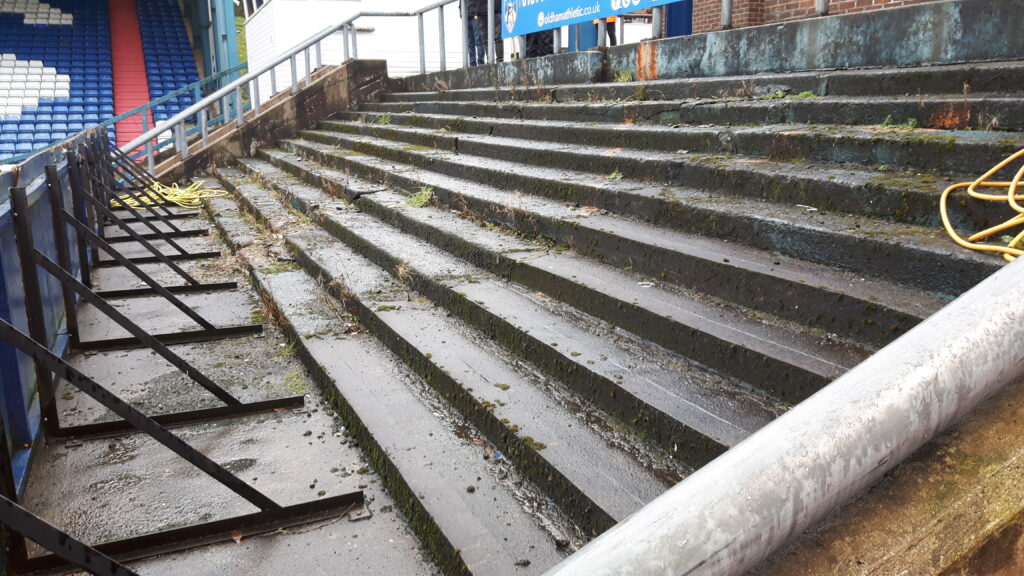 The game started off as a scrappy encounter. Neither side was able to find a real rhythm with perhaps the visitors looking the sharper. And it was the away side that took the lead after they were gifted a corner. A cross to the far post was put behind by Oldham left back Reckord, despite there being no opposition player near him. The resulting corner was neatly worked to Josh Cullen whose perfectly flighted cross was glanced home by Vincelot. Frustration began to grow amongst the home fans as their side couldn’t get going and City almost made it 2. Full back Tony McMahon made a mazy run down the right and just kept going, cutting in along the by line, past the hapless Reckord only to be denied by a face save by Latics’ keeper Ripley. 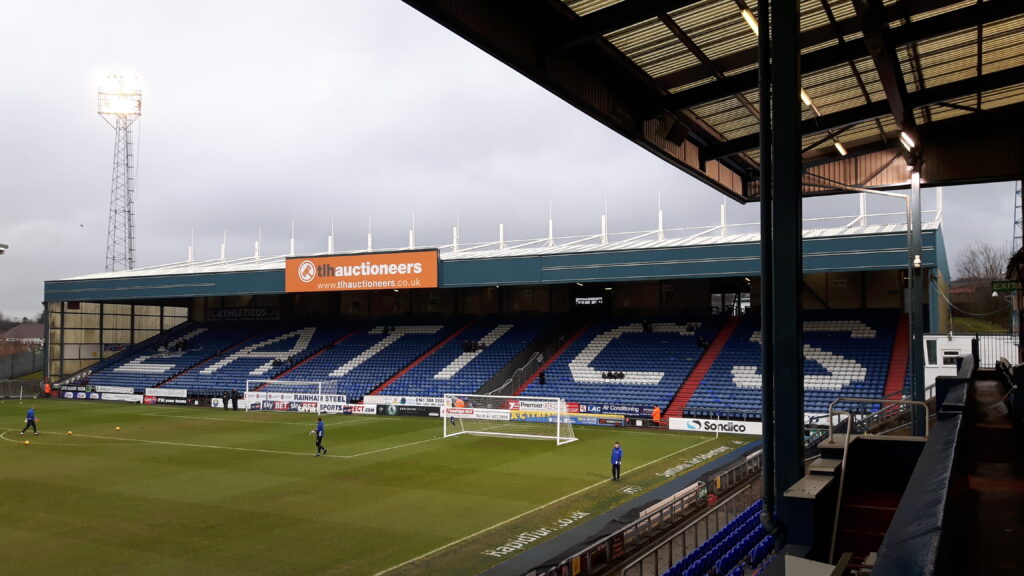 Out of nothing though Oldham levelled as half time approached with their first real attempt on goal. Taking inspiration from McMahon’s effort right back Brian Wilson picked up the ball on half way, kept going and shot tamely left footed from 18 yards. It looked to be a comfortable save for Doyle, but as the ball approached the Bantams’ keeper it hit a divot and bounced over the stopper and into the net. Cue laugher and chants of “hey Brian Wilson, oh ah, I wanna know o o o o, how you scored that goal” from the home stands. 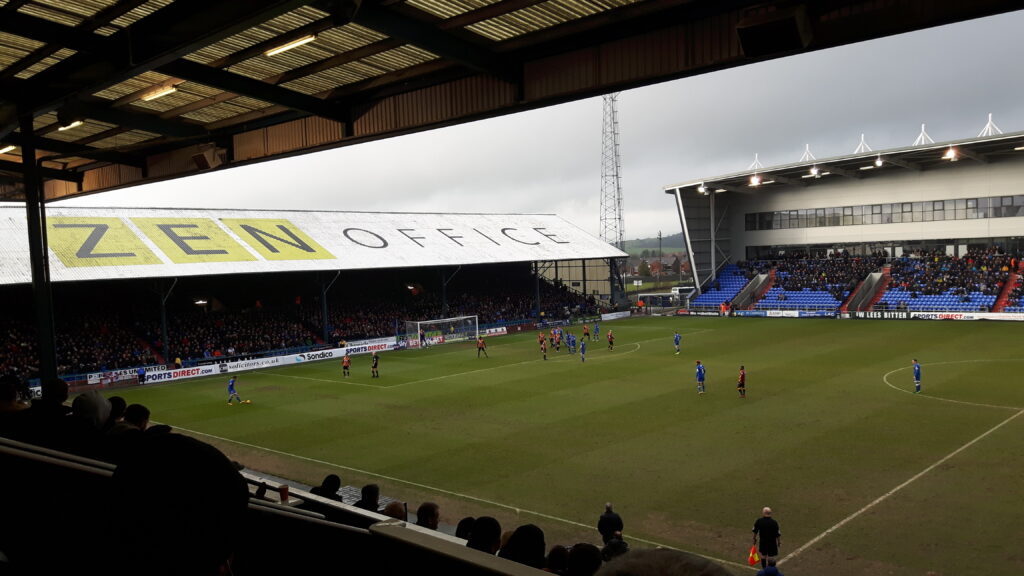 Game on second half you would have thought, but it was always the visitors who looked the more dangerous. Hiwula, Cullen and McCardle all had opportunities to score before the latter went one better poking in fellow centre half Vincelot’s header. Chances for John Sheridan’s men were few and far between during the game, McLaughlin probably had the best but fired wide. The midfield was where they lost the game as they could never get a foothold with Cullen on loan from West Ham dictating play for large periods. Lactics’ midfielder Ollie Banks bore the brunt of the home fans criticism and didn’t have the best of games. His cause wasn’t helped when he skipped past a couple of defenders, got to the edge of the area, went down and was booked for diving. In such a promising position he really should have done better to stay on his feet.

Atmosphere 3/5: Was decent in stages, noise was great when the Bradford fans were in full voice under the low roof.

Value for Money 2/5: £24 for pay on the day is a bit on the high side. To be fair to Oldham though it would have been £20 if I’d bought in advance and they did give free entry to their previous home game.

Have you made the trip to the home of Oldham Athletic? If yes, you can tick Boundary Park off your 92 checklist or if not plan your trip there: