As he closes in on the magical 92 blogger Tim Dove heads south to the American Express Community Stadium. With Dougie Freedman taking the Forest hot seat after the sacking of club legend Stuart Pearce would new manager syndrome strike…

Thoughts on the ground:
Brighton & Hove Albion moved to the American Express Community Stadium in 2011 which is located just outside of Brighton, in Falmer. I travelled to Falmer via train and upon leaving the station walked up the hill toward the stadium which looks an impressive structure. At first the semicircular roofs of the stand and the tubular supporting steelwork above them are reminiscent of the Galpharm Stadium in Huddersfield. However, at “the Amex” the stadium is an enclosed bowl rather than 4 stands with open corners, and visitors can walk around the entire ground. Behind the East Stand is a collection of famous players from the clubs history displayed on material and hung for display.

On one side is the impressive looking West Stand. This is a three tiered stand, with a large lower tier, a small middle tier and a medium sized upper tier. The seating in the upper tier follows the semicircular design of the stand, giving it an atypical effect. The team dugouts are located on this side, along with an open press area which is conveniently situated above the players tunnel on the half way line. Opposite is the smaller East Stand. This is a two-tiered stand. The gap in-between the two tiers is occupied by the Clubs’ administrative offices. 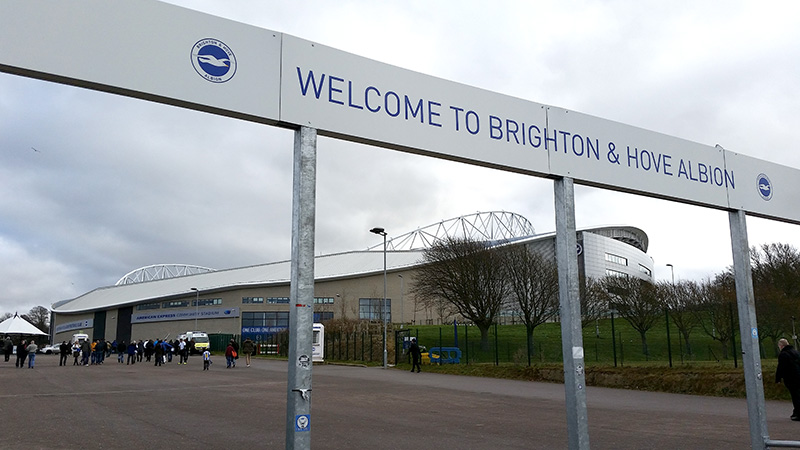 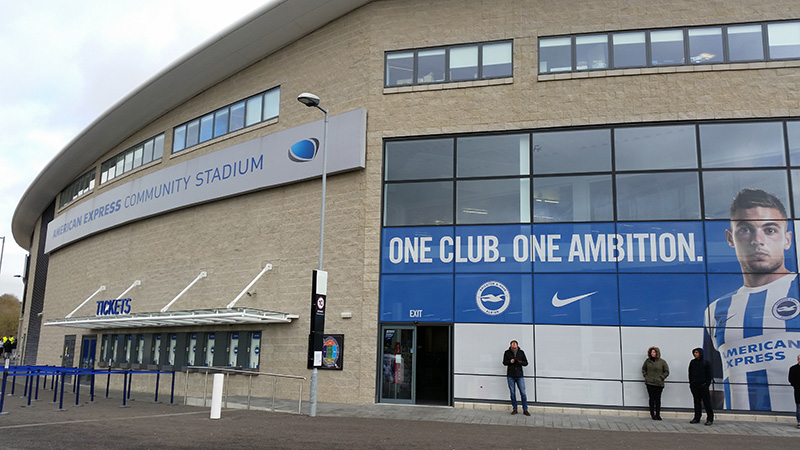 The North and South stands are behind each goal at the ends of the pitch and are both small single tiers of seating. One of these ends, the South Stand which is used for away fans, has a hospitality area containing a number of executive boxes and is situated above the seated area. The roofs over both the North and South stands slope down from the larger West Stand on one side to the East Stand opposite.
A couple of unusual points noticeable are that firstly, the images of seagulls are included in the ground seating display rather than club lettering, and secondly that the ground is particularly light due to the amount of transparent material used in the roofs of the stadium.
As is common with more modern built stadia the ground is located “out-of town”, but the ground had many different fast food outlets available, a bandstand with live music being played, and there was a social club which showed football, served beer and provided one of the finest pies that I’ve had at a football ground to date!

Thoughts on the game:
This was chance to see the beginning of yet another managerial tenure at Nottingham Forest, with negative publicity having surrounded the club since the managerial sacking of club playing legend Stuart Pearce and a football league transfer embargo following the late payment to other clubs of outstanding transfer fees in the previous week. Seventeen hundred fans travelled to support the away side and were rewarded with an entertaining game and a winning start.

Brighton had the majority of possession in a relatively uneventful first half, with Holla hitting the angle of bar, and it was no surprise later when Holla’s set-piece allowed Dunk to score. However, Brighton were left to rue other missed chances throughout the first-half when a set-piece two minutes after the opening goal from the Forest left from Osborn saw the recalled Danny Collins’ header go in off the post to level the score just before half-time. This was the first effort on target from the away side. 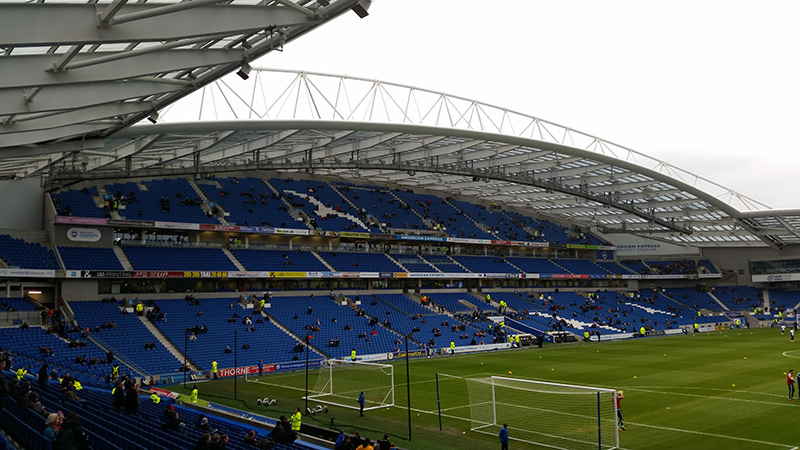 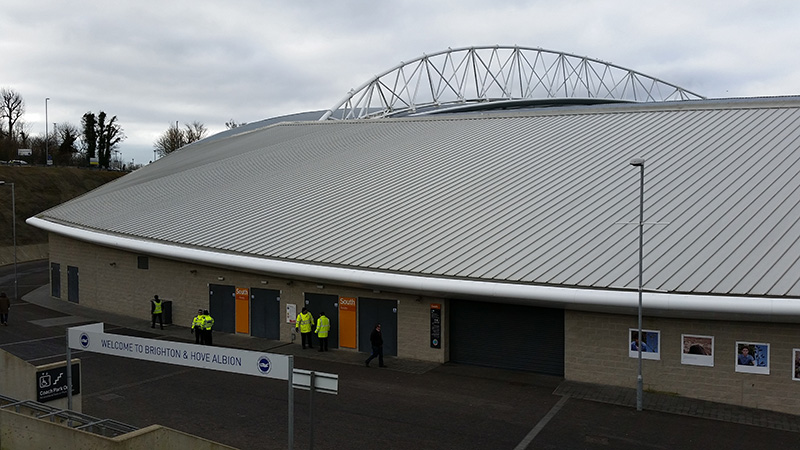 The second half started at a quick tempo and Brighton’s Teixeira was superbly denied by Darlow and then Teixeira put a free header wide.

After Forests Antonio had been crudely felled by Brighton’s Ince, right on the edge of the Brighton box, Forest made the most of the opportunity as the lively Osborn flicked a short free-kick to Lansbury to thread an angled shot through the eye of the needle, somehow finding a gap in a huge mass of players, to steer it into the back of the net.

Osborn looked to have put an air of comfort on things, when he benefited from some fine work from a rejuvenated Burke, applying a composed finish to the winger’s intelligent pass to make it 3-1 with just a few minutes left, after he had again combined well with the equally impressive Lichaj.

With a feeling that a two-goal lead and Forests play throughout the second half might have won the game, Brighton again exposed the Forest weakness to crosses into the box with a corner in the 90th minute, as sub Kayal flicked home a header. Forest then reshuffled in the final few minutes with Lascelles entering play and the substitute still had a key role to play by heading clear a clever effort from Kayal off the line in injury time, after the Israeli international had lifted a shot over Forest goalkeeper Darlow.

This was a match that Brighton might have won on another day. Dougie Freedman began his career as Nottingham Forest manager however with a win and an air of positivity returned to the club. 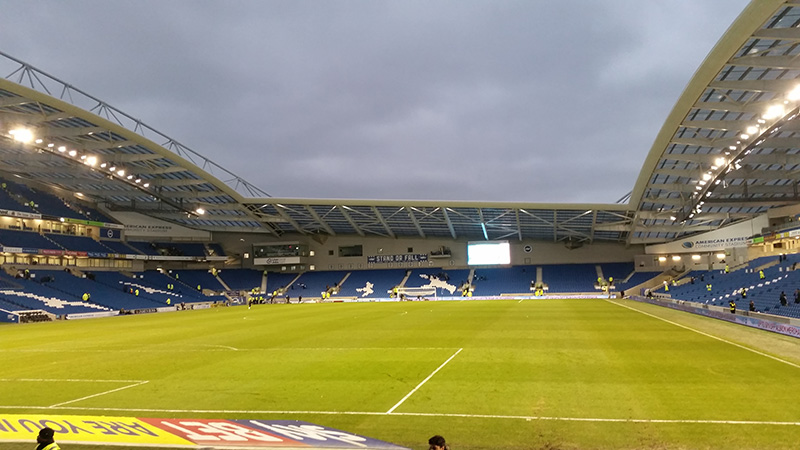 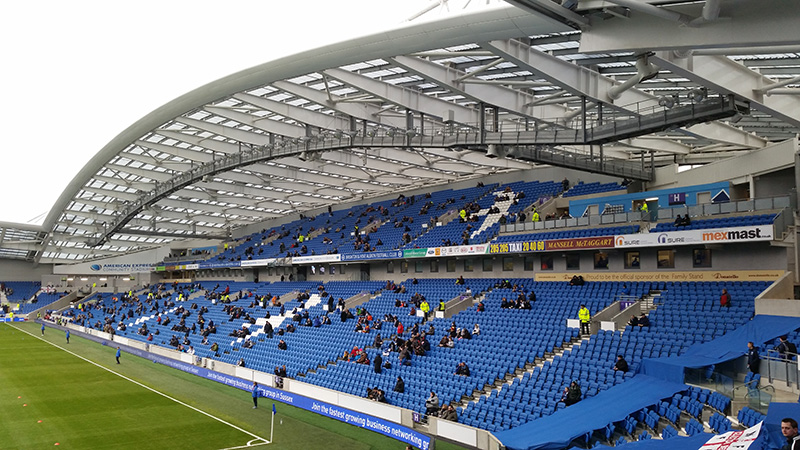 Atmosphere 3/5: A well-attended match but with both sides having recently struggled for form then both sets of fans were relatively quiet. Better atmosphere in second half as match entertainment increased.

Location 3.5/5: Located in Falmer just 10 minutes by train from Brighton. There doesn’t seem to be much around the ground as a recent out of town development, but a social club, multiple food outlets and a bandstand are available for pre-match entertainment. Frequent trains post-match to take fans back to Brighton.

Value for money 4.5/5: £32 for a match with 5 goals, 2 shots hitting the woodwork and a last minute goal-line clearance. Free travel to the stadium included. Comfortable padded seats but fans chose to stand all game!

Pie Rating 5/5 Excellent. A top quality pie far exceeding the quality typically found at sporting or musical events. Four fillings available. More clubs should look to this example at how to provide food.

Pint Rating 3.5 A decent pint but slightly expensive and served in a plastic glass.

Programme 4/5: A thick programme on decent quality paper. Good quality features inside which even included an interview with the youth team physio. A better than average programme.

Overall 4.5/5: A great day out at a thoroughly entertaining game.

Keep up with Tim as he nears the end of his journey to complete the 92 on Twitter @dovet1975. Have you ticked Brighton’s home off your list? Add it to your 92 here www.the92.net/ground/amex or plan your visit using our away day planner here www.the92.net/plan-your-away-day/amex.