A lot has been made of German football in the English media in recent years, more so following the financial machine of FC Bayern and fan owned Broussia Dortmund reaching the 2013 UEFA Champions League final. The no frills direct approach of the Bundesliga, famously known for fan owned clubs, cheap tickets and the ability to swirl down a sturdy German beer in the spectator viewing area, further backed the prestige and fanfare of the German Bundesliga. Not surprisingly, these traits of the league trickle down the league system through to the Zweite, Dritte and Regional Bundesligas. My article here covers my visit to see 1. FC Union Berlin, in the 2. Bundesliga, facing MSV Duisburg, at the fan built Stadion An der Alten Föresterei  (Stadium at the Old Foresters House). 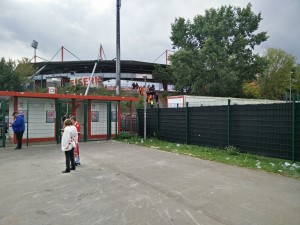 The stadium as you approach it.

On a warm early Autumn Saturday, I set off from the centre of Berlin towards the old eastern subburb of Köpenick, changing the S-Bahn train for a street tram, joining more Union fans for the journey north of the river Spree. The tram stop for the stadium drops you close to the stadium, by a forest. To get to our stand, we had to walk around the stadium, and through the shade and mottled patches of illuminated pathway created by the shadow of the trees close by. The 24,000 capacity stadium was recently reconstructed by the fans of the club, telling in the way the stadium is constructed, with three large terraced stands, with the Main Stand housing all the modern seating and facilities needed to support football in the Zweite Bundesliga. 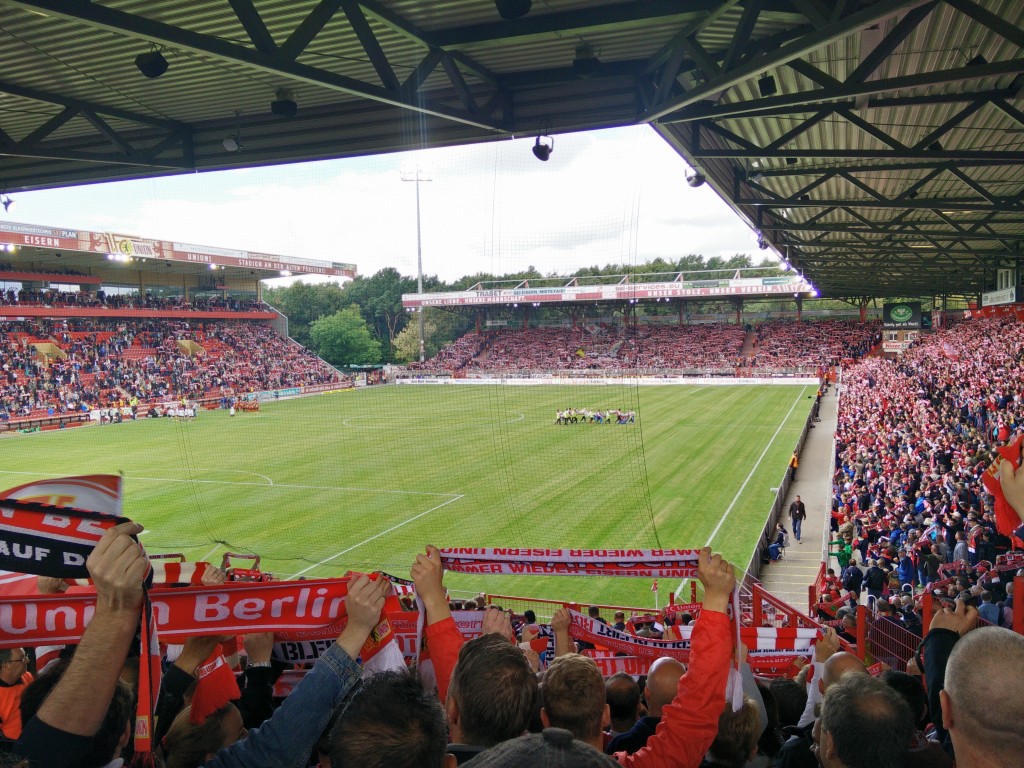 Build up, with the three terraces engaging in pre match rituals.

We gained entrance to the outer part of the stadium, greeted by a wall of beverage and food stalls, the smoke from crisply grilled meat wafted through the air, as fans chattered in groups, the sound of rock music murmuring through speakers located nearby. The grill offered the traditional German wurst (Sausage) in a roll and, surprisingly, a steak too, also served in a roll. I took the wurst, drenching it in ketchup and mustard as I headed to a small queue for a beer.

Once stocked up on essentials, I passed the small benches dotted around, climbed the steps to the back of the stadium and enter the terraced section of the stadium, taking sentry just behind the goal, with the 500 strong away fans to my left. The atmosphere grew as kick off approached, with regular chants being cued by the tannoy announcer, and occasionally by raucous home fans, a wall of red and white, behind the goal at the other end. 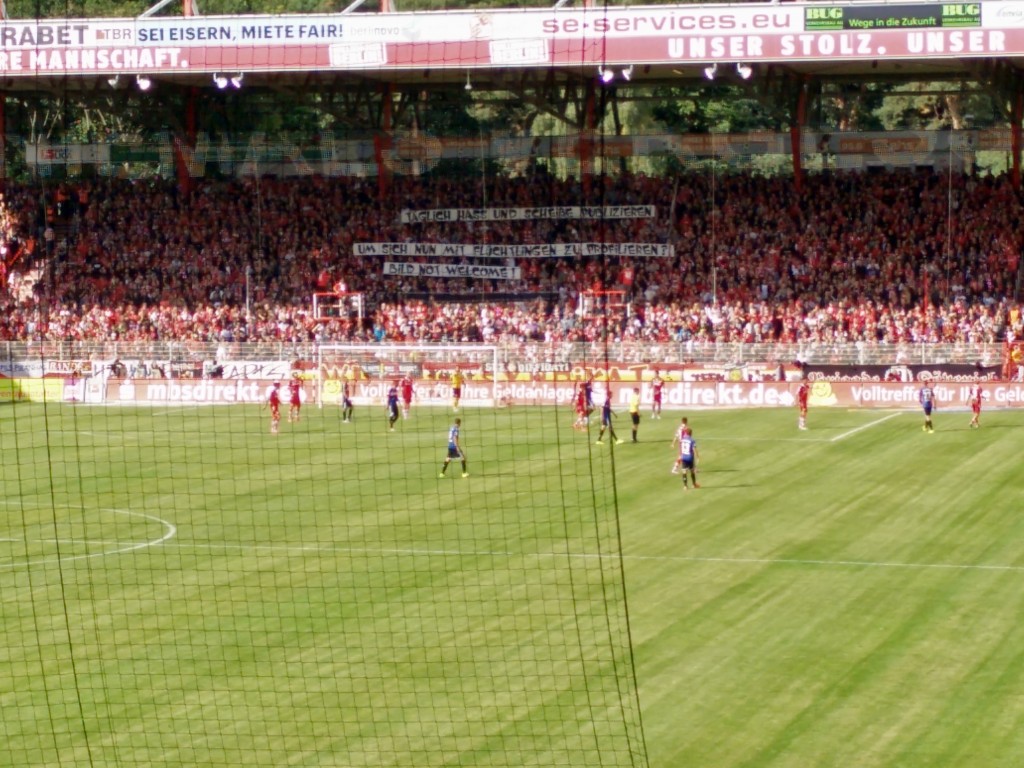 The Ultra’s terrace protests at poor journalism from the national tabloid ‘Bild’ regarding the Refugee crisis.

As kick off drew nearer, the terraces were almost full, whilst the seating in the Main Stand was barely half filled. The tannoy announcer read the teams out, the Stadium erupting in unison after every Union Berlin players name was read out; “Eisern Union” bellowed the home support. I noticed in the hoard of fans at the other end of the stadium, there were two plinths, jutting out from the terrace, which hosted a fan and a large drum. Built into the stadium! For the want of creating a fearsome atmosphere for the fans.

With Union taking an early lead, the stadium exploded, and doubling it shortly after the half hour mark. The stadium was warmed by the performance, but it was only the vocal end, housing the ultras, that was consistently maintaining noise within the stadium. The lead was extended on the stroke of half time, a third goal riffled in, to Union’s advantage, 3-0!

During half time, I was served quickly the required liquid refreshment, in my reusable and returnable deposit paid plastic container, before this time opting for the stake served in a roll, again drenching suitably in ketchup and mustard, consuming my haul in the spacious outside area, soaking in the warm sun rays. 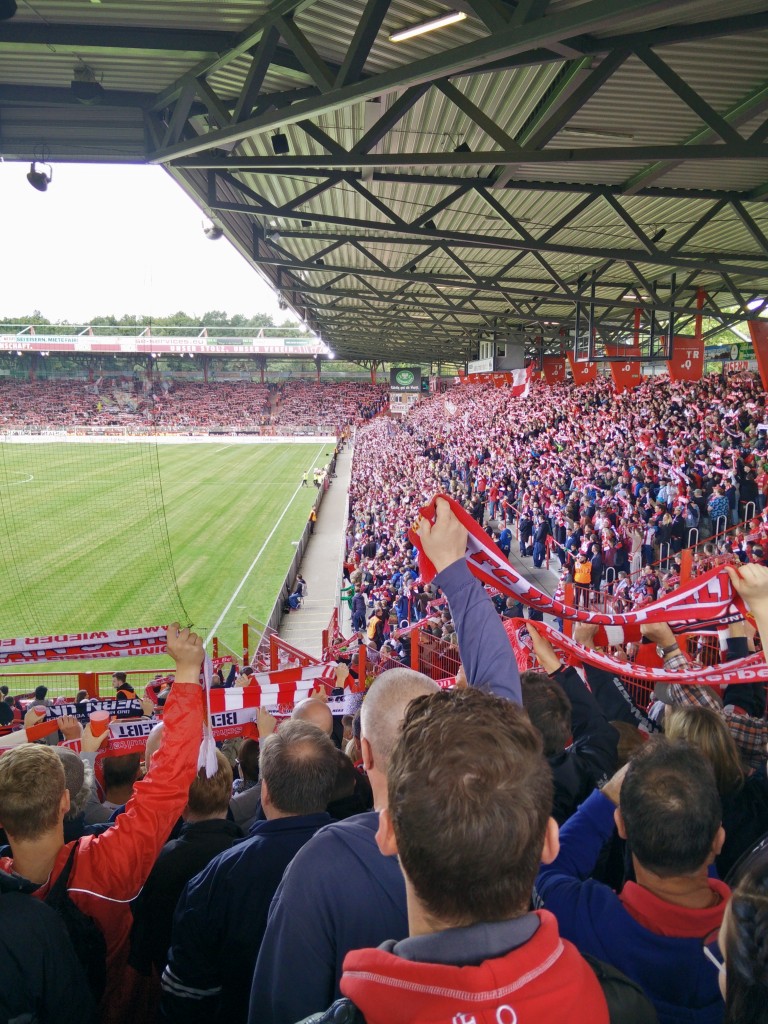 I took to my spot for the second half, the stadium lit warmly in the sun, the atmosphere warming up slowly too, but Duisburg pegged a goal back after 11 minutes, as Union failed to find rhythm. The atmosphere didn’t wain, but Union’s control did. A well played through ball for Union lead to an intense 50-50 chase, the winner of the ball would either clear well or earn a penalty.  PENALTY. However, the MSV Duisburg keeper did well to protect his goal, the offender squandered the chance to close the game, and with it MSV Duisburg came alive. A flury of subs, before the inevitable goal for MSV came with just 6 minutes left on the clock, the feeling around me became tense, but in the away area, the fans turned it up a notch. Eventually the game drew to a close, but without some rushed defending, to see Union roll out 3-2 winners.

I took my time to leave the stadium, admiring the craft of the fan built stadium, with the fan front and centre of all design processes. Easy access bars with short queue times, safe standing for three or the four stands, plinths for fans to lead the football chanting, relaxed seating areas to enjoy well cooked meats and chilled drinks, rock music on in the background. The price of my ticket was 15€, which isn’t even the cheapest. The club and stadium don’t stop to impress there, during the last FIFA World Cup in 2014, the stadium became a huge lounge, the club hosted people’s couches and sofas, allowing the owners to watch the game on big screens. This is not only a football stadium, but a home to thousands, thousands who also helped build it.