Groundhopper Tim Dove heads to Kingsmeadow to tick off the home of AFC Wimbledon on his quest to join the 92 club.

Thoughts on the ground:
Kingsmeadow is a small but tidy stadium that has a modern feel to it due to the investment in recent years since AFC Wimbledon took over the lease from Kingstonian FC, who still groundshare with the Dons. On one side is the Paul Strank Stand. This is a covered and all seated Main Stand which has recently been extended and runs the full-length of the pitch. It is only right rows high but lacks any pillars so fans have a good view of the playing area. This stand can seat 1265 supporters. Opposite this is the Your Golf Travel (East) Terrace. This terrace is covered but has open flanks to either side. The scoreboard and TV gantry are located at the top of this stand at the halfway line of the pitch. At one end is the Chemflow Terrace where the majority of the vocal home supporters stand. This newish looking covered terrace is located quite close to the edge of the pitch. At the opposite end of the ground is the Nongshim Stand. This smart looking stand was opened in September 2012. It is covered having a raised roof and has an all seated capacity of 1,000. At each of the four corners of the stadium are four traditionally-styled floodlights. 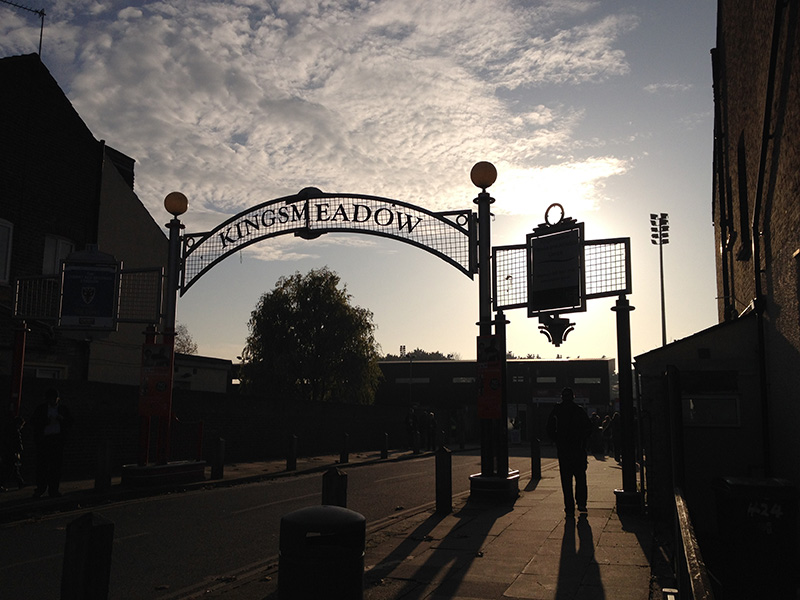 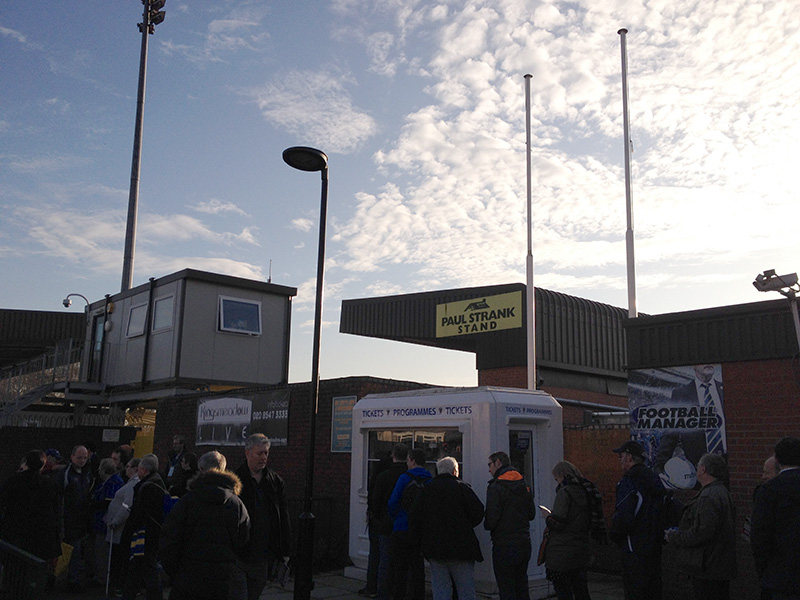 Thoughts on the game:
This match was a great advert for League 2 football with two closely matched sides creating frequent goalscoring opportunities.

Cambridge United came from behind to beat AFC Wimbledon and claim their first away win in four matches and also end Wimbledon’s unbeaten home league record since August.

Wimbledon went ahead after Tubbs latched onto an Akinfenwa flick-on from a long ball to round the goalkeeper and then place the ball past the covering defender after only nineteen seconds. It had all looked so promising for Wimbledon after this and then a further good spell but that goal was cancelled out by Appiah, whose sublime curling effort from the edge of the box found the net after just thirteen minutes. Despite such a cracking individual goal, Appiah refused to celebrate against the club he had served well at the end of last season. 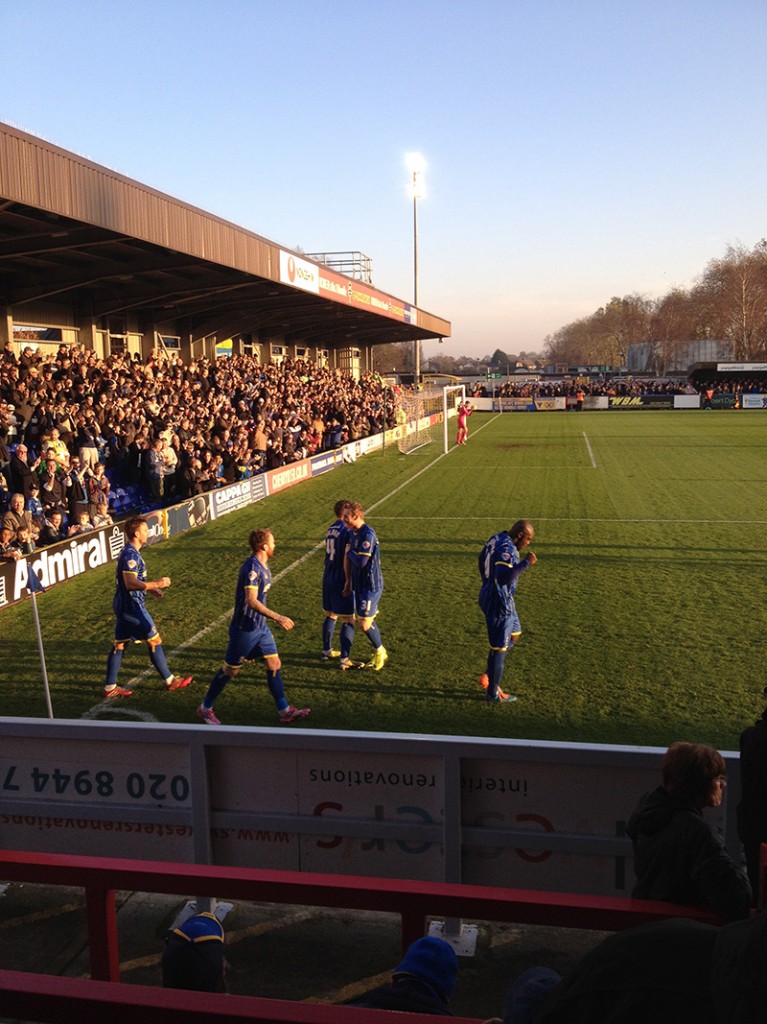 Wimbledon recovered well from this setback and a great ball by Bulman gave Akinfenwa a sight of goal through the middle, but he delayed his shot and the chance was gone. Wimbledon came so close before the half hour mark when Akinfenwa’s flick-on fell nicely for Rigg and he produced a clever lob that Dunn just managed to tip wide. However, Cambridge showed a real threat with shots from long-range and the visitors so nearly snatched the lead with a powerful drive from Kaikai that flashed just wide.

Cambridge started the brighter after half-time with Kaikai proving to be a constant threat. Kaikai threatened with a solo marauding run just minutes into the second-half that ended with a shot deflected just wide. Wimbledon should have gone in front on fifty-six minutes when Akinfenwa uncharacteristically missed a gilt-edged chance. Rigg produced a powerful run down the left and his deep cross fell for Akinfenwa just six yards out, but he fired into the side netting from close range. Barely a minute later and Cambridge took the lead for the first time. Kaikai sent over a teasing free-kick from Wimbledon’s right side and Hughes bundled the ball over the line at the second attempt after Shea had initially saved. The Dons could have been killed off shortly afterwards when Bird latched onto a long ball over the top and cracked a fierce drive that flashed just wide of Shea’s near post.

With the game approaching its latter stages, Wimbledon were struggling to mount anything as an attacking force. Akinfenwa attempted to breathe life into the hosts with a fine run and pass to Fuller, who sent over a lovely cross to the back post, but no one was on the end of it. Wimbledon struggled to fashion anything of note after that as Cambridge comfortably held on. The Hughes goal in the fifty-eighth minute proved to be the winner for the U’s. 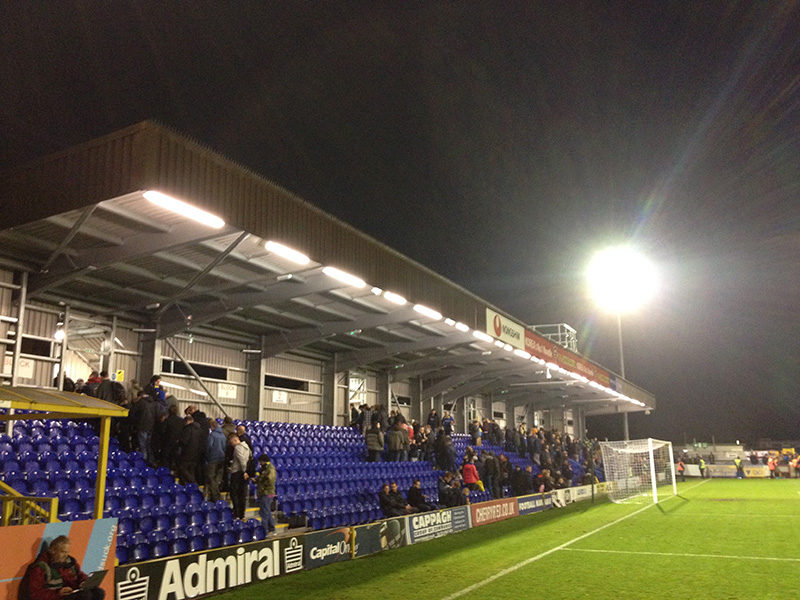 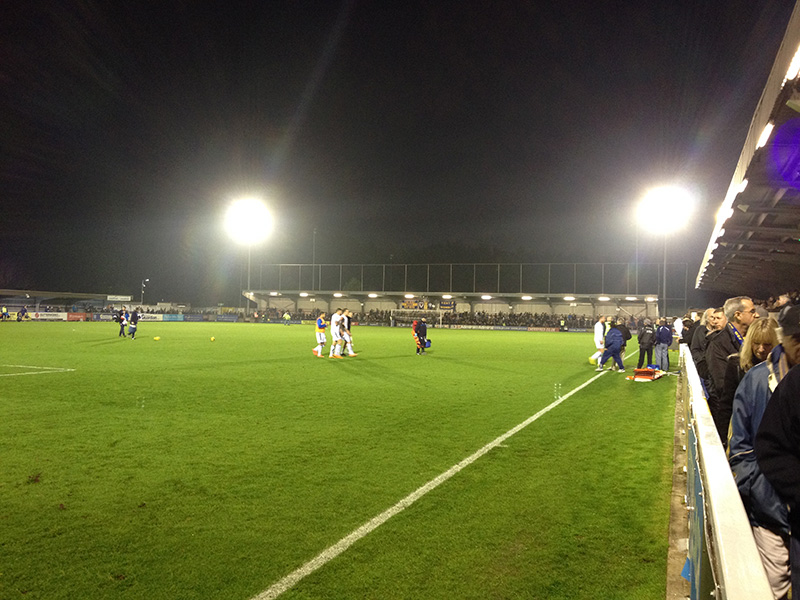 Atmosphere 4/5: Good vocal support from home and away fans, with home fans encouraged by the womble mascot banging a wheelie bin.

Location 3/5: 25 minutes by train from central London and then a 15 minute walk from Norbiton train station. No signs for the ground, but only 3 junctions to navigate and a steady stream of fans heading to the ground.

Value for money 4/5: £22 for a game with many goal-scoring opportunities. 3 goals, including an opener after 19 seconds, and plenty of good saves and missed chances throughout.

Programme 3.5/5: A thick programme on decent quality paper. Good quality features inside and only let down by regular advertisements. A better than average programme.

Overall 4/5: An enjoyable day out at a thoroughly entertaining game.

You can keep up with Tim on Twitter @dovet1975 and follow his 92 here. Have you ticked the home of the Dons off your list? Add it to your 92 here www.the92.net/ground/kingsmeadow or if you’re thinking of going plan your visit using our planner here.