the92.net co-founder and global groundhopper Michael Moss touches base on his first blog from the World Cup 2014 in Brazil

The planet Earth, our World, does a complete orbit of the life giving star, the Sun, in 365.25 days, meaning that every four years we have to incorporate an extended February to catch up with the true orbit of our planet.

Every four years, an event occurs that causes much of the World to stop, or at least slow down. That is the World Cup, and for 2014, it is in Brazil, the country who have taken the World Cup home on a record 5 occasions, but lost it on home territory in unceremonious fashion in a group game against Uruguay in 1950 to Uruguayan Alcides Ghiggia’s goal. It is claimed he was one of only three people to silence the world famous Maracana (the others being Frank Sinatra)!

So, we are 64 years on, and the axis of the World has shifted, the Cold War has ceased, then been potentially re-ignited by another Russian megalomaniac, albeit without a moustache, the wall has fallen in Berlin, football has become such a commercial venture, nations are will to spend €20 million just on the bid process and reportedly up to €5 million just to bribe their way into the electorate and Rik Mayall was born, influence the comedic landscape and subsequently died. Manchester United also knocked Liverpool off their perch.

So, why do I continue writing such dribble? I am passionate about football, and the opportunity to visit Brazil, where one of my closest friends is fortunately living during this tournament, for the World Cup in 2014 was just too good to look away from. At first I was hesitant about the cost of everything, then I accidentally slipped into a spiral and am now entering the group stages with gusto (along with a mini Tech House break to see Seth Troxler and Mano Le Tough at the world famous Wahrung club…).

OK, so I might be seeing such salivating delights as Iran vs Bosnia & Hercegovina, and you may snot in laughter, but this isn’t about 90 minutes, it is about the culture of football. Both countries have and are going through some pretty hectic shit, Bosnia with the atrocities of the early 90’s and recent flooding, and Iran… well, where do you start.

This blog will cover football, culture, the people of the World Cup, the unpredictable reaction of the Brazilian people, the cities, how the governing bodies fare at completing the required infrastructure and overall how FIFA handle the event and potential problems.

I will update often, however, another challenge, is I am doing this sans technology. I am connected to the world 24/7, so three weeks should be a good enough break!

If you want an itinerary, please see below… 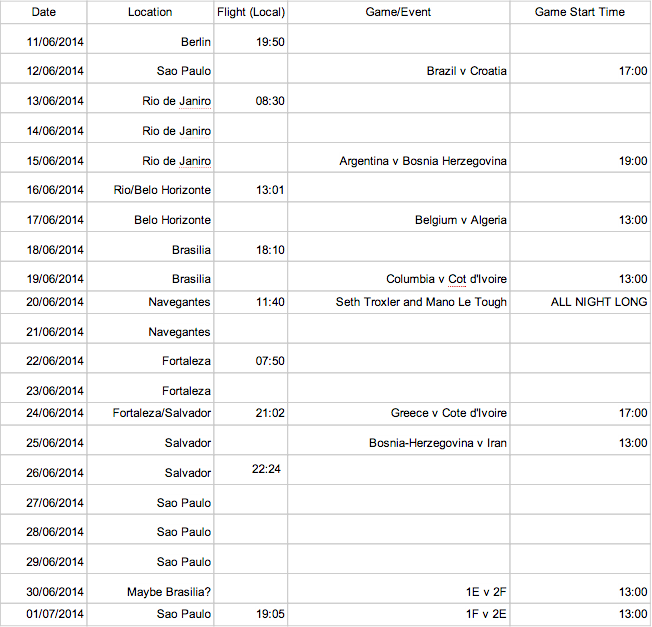