The World Cup 2014 has been lambasted for it’s poor effort to support Brazil, a developing country, with it’s infrastructure programs. The two biggest cities with a combined population of 20 million individuals, although neither the capital, have no rail connection, despite being a relatively close 420km apart.

Our group of seven assumed escape velocity from the concrete swamp of Sao Paulo and raced into luscious countryside, however none of us witnessed this due to drowning in slumber. Upon occasionally waking, I admired the freshness of seeing my first panoramic of Brazilian greenery, before resuming sleep mode.

At what I assume was close to the mid point, we stopped off at a services. Collectively the group rose and marched into the store, with an alertness to the beer fridge. We were on holiday after all. After attempting to board the wrong bus, we were on our way to Rio, eager to be captivated by Holland Spain. Lady luck was not on our side and in the middle of a sweeping contoured countryside did the dual carriageway come to a stop. Every person disembarked from their vehicle and the waiting begun. Hours later and we resumed and passed the wreckage of a lorry that had smashed into the rocky hillside, presumable taking another vehicle or two along the way. 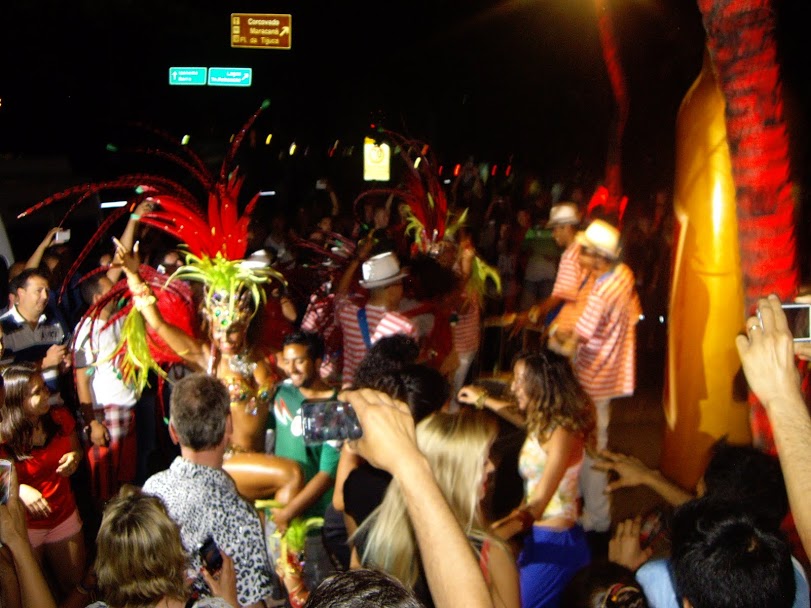 Party Atmosphere on the Copacabana!

The remainder of the journey was eventless, although the foolishness of not buying more beer for the journey was a hard pill to swallow. A quick taxi journey to our temporal home for nights, two streets off the Copacabana, and a quick check-in with the continually sweaty Emerson left us to delight in the destruction of Iker Casillias and World Champions Spain. We entered cruise mode and settled on a restaurant for Chile to tease the Australians before leaving them for dead like the kilos of steak we consumed for dinner. A steady flow of drinks, banter and card games ensued as we walked the crescent of the Copacabana and soaked up the atmosphere of dancers, football fans and general lively people. As sleepy heads started to fall asleep mid card game, it was declared to hit the hay and embark on an early start to get into the Rhythm of Rio and enjoy the full four fixtures of World Cup – Day 3.

Starting your day with a decision to go for a swim on the Copacabana is nothing short of amazing. With a marginal hangover a troop of the seven headed towards the Atlantic with nothing but essentials. After a couple of swims, it was decided to have a break(fast) for Caipirinhas. Upon the group reuniting and getting ready, there was a split in decision making. Four wanted a day of football and the Copacabana, whilst three were geeking out for tourist attractions. I was in the football loopy section. 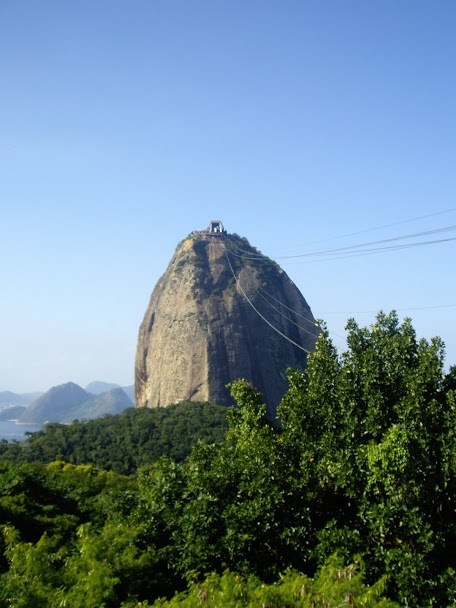 Halfway up towards the Sugar Loaf.

The day evolved slowly and the build up of Argentinians on Avenue Atlantica reached a pinnacle when cars were unable to pass and the continual flow of Spanish sung words from 1,000 people created an interesting atmosphere. The Malvinas claiming group were slowly encouraged out of the road and onto the beach where the parting and praise for Maradona and Messi were not necessarily greeted with much empathy from the Brazilian.

Our day cruised effortlessly from one casual beer, caipirinha or swim in the ocean until we decided to go back and change from beach wear to evening wear and see England’s entrance to the 2014 World Cup.

The England performance was predictably shit and a friend back in Berlin had forecast that England could be out after two games looked to be on collision course, combined with the Costa Rica shocker against Uruguay, England were in trouble. Maybe these Costa Ricans can play football.

The intoxication levels were increasing and the decision to hit up a club was clear and Electronic music, much to my delight, was the selection.

The mornings hangover was softened by the swim in the ocean. The football troop of the previous day decided to be tourists, with the Sugar Loaf Mountain the destination. It was also the first game at the Maracana, with Argentina playing Bosnia, for which three of the guys had tickets (but I didn’t).

It was a short while before the first liquor was consumed, but alas the view half way towards the Sugar Loaf was so sumptuous, not swigging back a Skol would be scandalous. Onwards to the peak. And Wow. What a view. Rio is certainly one of the most beautiful big cities I have visited, and this view summarised that thought process further. 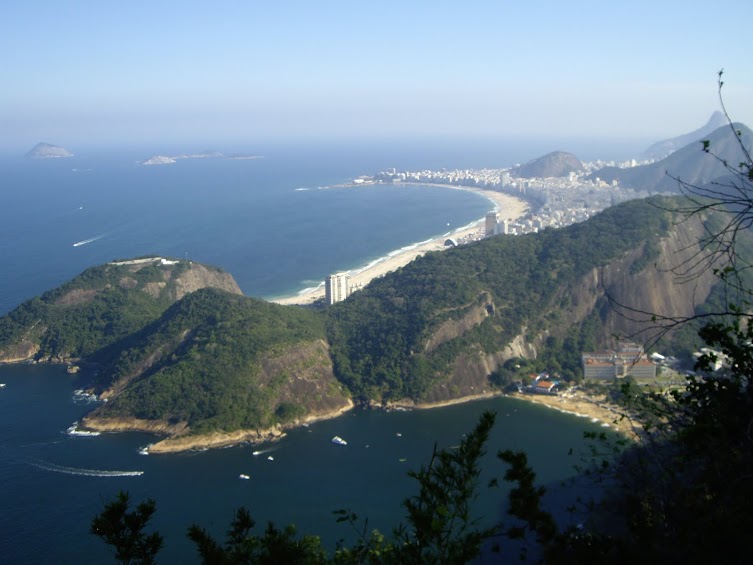 Panoramic of the Copacabana from the Sugar Loaf.

After such beautiful scenery, it was decided to head to the Maracana, with kick off approaching. We took the metro and at a key interchange, the train sucked hundreds of loud Argentina fans aboard. All the way to the Maracana was an eventful charade of songs and bouncing.

Upon arrival I got my touting head on, along with Ravi, and learnt the Spanish, Portuguese and Bosnian for “Ticket” and as we walked to the wonderful Maracana, pipped up to alert those selling of my need; there were plenty in my situation, not so many sellers. The prices offered were hardly friendly and FIFA’s contempt was low. The occasional transaction being made close to Police or FIFA officials, if I can notice what is going on, then surely people of an official nature should be enforcing the rules. The continual bullshit, scaremongering and propaganda that FIFA offers to the ticketing situation is nothing short of embarrassing and frustrating and if anything complicates the process to embarrassment. I have on many occasion touted for tickets, however I refuse to enter a capitalist regime of profiteering. I once witnessed a Manchester United fan furiously calling for the head of Malcolm Glazer, before offering me a FA Cup final ticket to the tune of £300 (value of ticket £70). The difference between him and Malcolm Glazer is minimal to me. 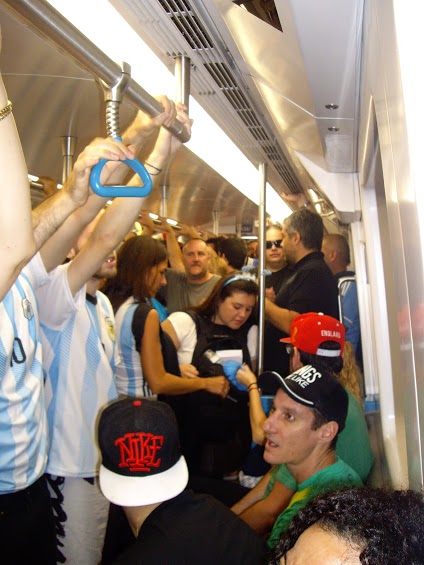 The one train was a Sardine Tin for Argentina fans. And us.

I eventually declared war on one French tout, calling him out for his callousness towards the plight of those who want tickets and those clever enough to obtain them by the hand full. His asking price of close to 1,000€ was horrific.The ensuing slagging match put him in his place, but was not a substitute for his mercenary way. Despite pointing out the apparentness off the illegality he was engaging in, the police did nothing.

With minutes to go, and success shadowing me like Liverpool’s inability to win a Premier League title, we decided to head back to the Copacabana to watch the game in the fan zone. A brief encounter with an old colleague, Matthew Woodcock, was a pleasant surprise. His smugness in telling me he had his ticket was not required (or maybe it was).

The Maracana would have to wait, but I have been there on a game day and the vast size and sculpture of it is impressive.

Entering the fanzone was easy, but finding our friends was troublesome, which was compounded when I lost Ravi, who was the one of us with a phone. In a crowd of several hundred thousand people, I thought I would not find them. However, I applied some common sense and started making my way through in a coordinated zigzag in the approximate area where I was last informed of their positioning. Success was achieved and relief between us all was good. Beer was the reward. After a valiant Bosnia succumbed to the talent of Messi, we again hit the crescent of the Copacabana to embrace food and beer. An early night was on the cards, the previous nights antics had caught up on another eventful day. 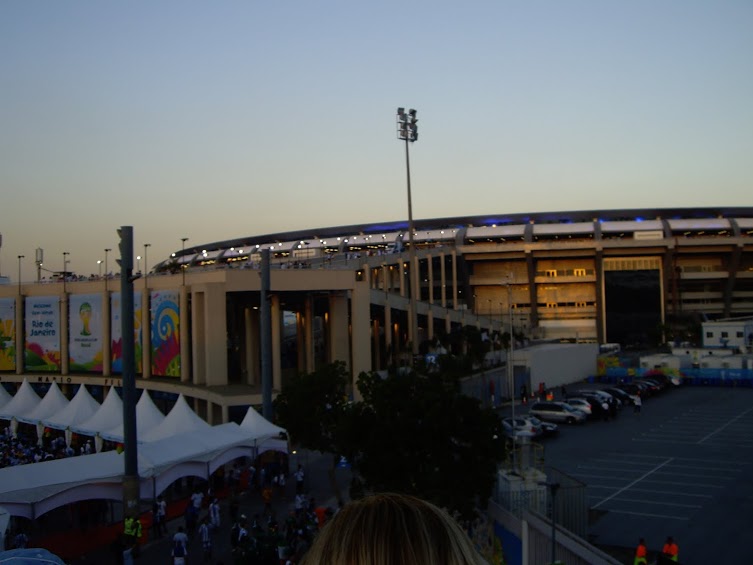 The Maracana in a sunset tone.

I decided to write a blog at this point, and this is where I instantly realised it would be difficult. Keyboards weren’t fixed, but electronic on screens were used where keys didn’t work, with stickers on the keys to identify those that didn’t work. Given this blog alone is 1,400 words, the challenge was going to be too big and I would, as I am now, have to write the blog retrospectively. The infrastructure theme of Brazil would become all too apparent through this journey.

Our next destination was Belo Horizonte (translated as Beautiful Horizon), so quickly packing and tidying our temporary home, a small group departed. The other group would meet us later, as they didn’t want to miss the German thrashing of Portugal (they were German afteral). Our group left Rio from the domestic airport, which is in the ocean and climbs over the city on take off… A wonderful way to wave goodbye to the brilliance of Rio, a city I could identify with living in at some point in my life.

You can keep up with Moss on his global adventures on Twitter @enjoycoca_, look out for part 4 coming soon.