the92.net blog veteran Tim Dove flies into Newport to tick off Rodney Parade as he inches closer to joining the 92 club.

Thoughts on the ground:
Having spent eighteen years at the Newport Stadium, Newport County moved to Rodney Parade at the beginning of the 2012/13 season. This is shared with Newport Gwent Dragons Rugby Club and there are more signs for the rugby club than Newport County as you walk around the ground. As is typical with older stadiums it is situated very much within the local community and there is plenty of free street parking to be found amongst the houses around the ground. 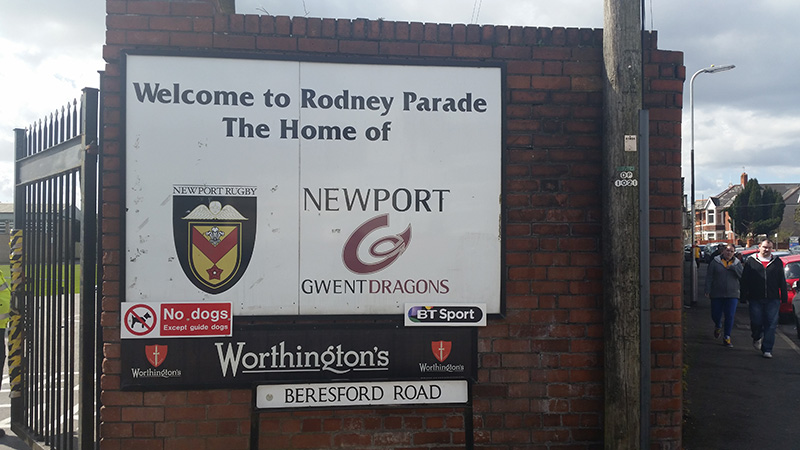 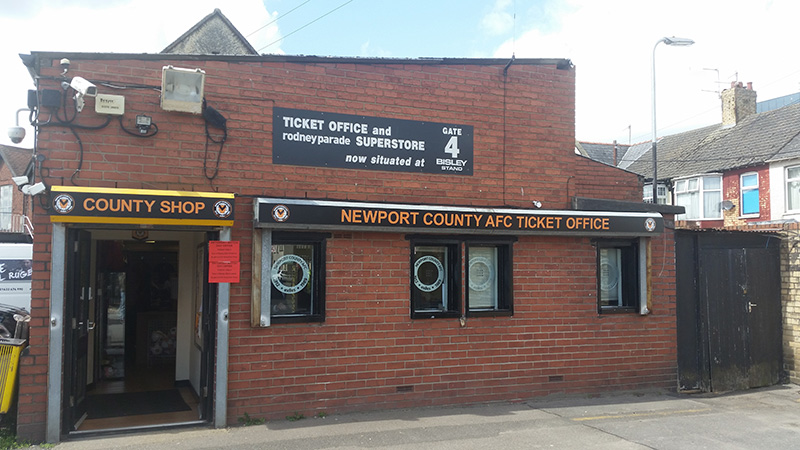 Situated on the East bank of the River Usk, Rodney Parade has seen some recent investment with the opening of two new stands. At one side is the Bisley Stand that opened in 2011. This is an all seated stand and covered stand with a capacity of just over 2,500 seats. It is single tiered and incorporates 13 executive boxes, that are visible at the back of the stand. The roof is situated quite high up above the spectators area and incorporates a television gantry and there are no supporting pillars to obstruct your view of the playing action. On a bright sunny day such as the day I attended then many spectators in this stand had to shield their eyes to watch the game. Having arrived early and seen the stand whilst empty then the seats were comprised of different colours which produced an eye catching ‘polka dot’ effect from the club colours. This stand has a row of four floodlight pylons protruding from the roof. 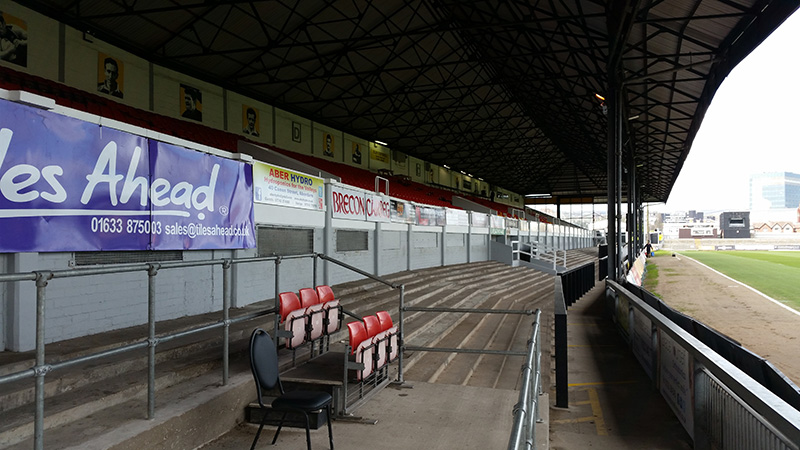 The other most recently redeveloped stand at Rodney Parade is the North or Town End, and this is set unusually far back from the playing area. This is a small open terrace.

Opposite to the Bisley Stand is the Hazell Stand. This is a covered stand with seating to the rear, windshields at both ends and terracing to the front. There is a row of thin supporting pillars running across the middle of this stand. The Hazell Stand does not run the full length of the pitch and has a section of open terracing on one end towards the North End terrace. The team dugouts are situated at the front of this stand. This stand also has a set of four – albeit older looking – floodlight pylons protruding from the roof.

At the South is a small stand of seating which runs for only half the width of the pitch. In one corner is an unusual building with a large pyramid shaped roof. This houses the dressing rooms and the teams come onto the pitch from this corner of the ground. There is an electric scoreboard mounted on the front of this building. 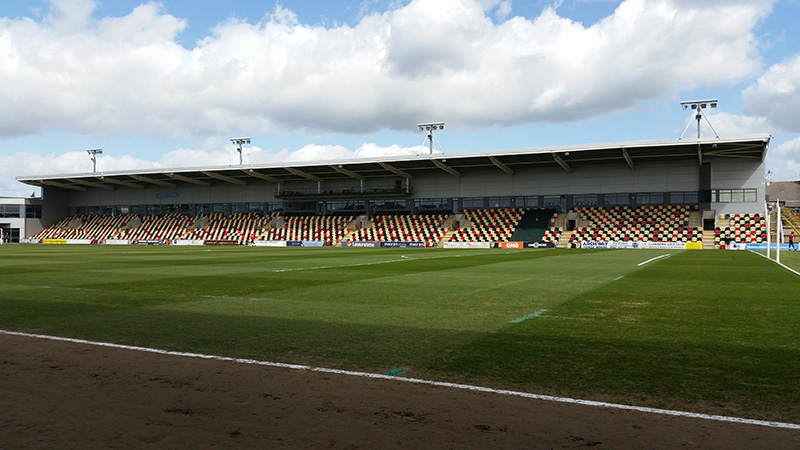 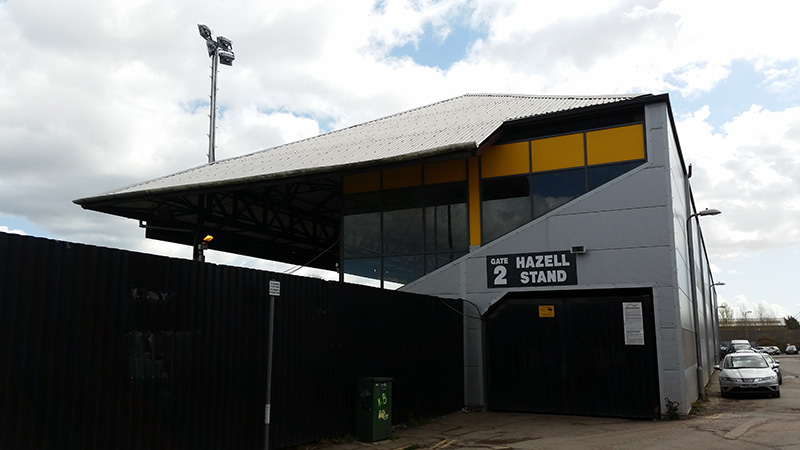 Thoughts on the game:
Bury kept up the pressure on the League Two automatic promotion places and continued their recent excellent form with a deserved win and dented Newport County’s play-off hopes.

After initial home pressure with frequent attacks on the right hand side that failed to breakthrough a well organised Bury defence, the visitors were in control after Ryan Lowe opened the scoring, flicking Chris Hussey’s drive into the net.

Newport continued to chase the game without really creating any clear-cut openings and Bury continued to control the game with possession and moving the ball around quickly. Newport came closest to scoring early in the second half when a cross from the Newport left was unexpectedly sliced against the Bury post by a Bury defender. 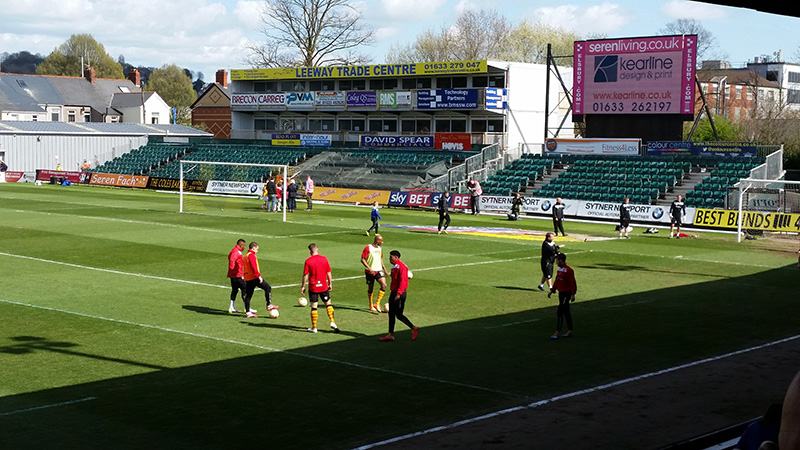 Newport continued to push forward throughout the second half and the defence began to play higher up the pitch. Bury then looked to catch them on the counter attack as Newport played the offside trap. This provided a critical moment of the game on eighty minutes as a controversial offside was given against Bury and there was a prolonged protest about the decision. Within two minutes another offside decision was not given and Daniel Nardiello made sure of the three points as he beat the off-side trap to slide the ball home. Being sat directly in line with the second decision my initial reaction was that this was offside but felt the referee had allowed the game to continue so shortly after the previous decision.

A very solid performance from Bury and a deserved win, although not the most entertaining game as not many clear cut chances were created. 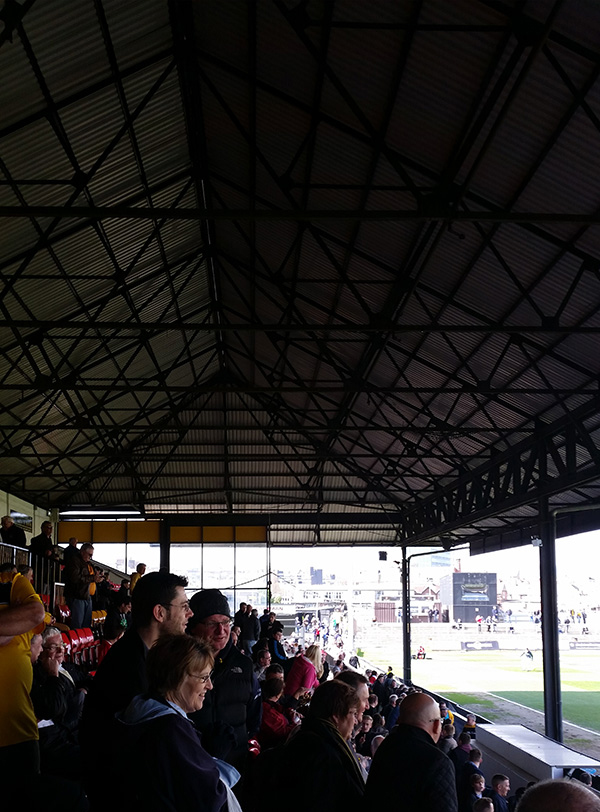 Atmosphere 3/5: A decent enough atmosphere with home support encouraged by a drum.

Location 3.5/5: About a 10 minute walk from the train station, a short walk to Newport High Street, and on the outskirts of town for those arriving from England. Ample street parking next to the ground when arriving early enough.

Value for money 3/5: £18 for a seat under cover and not restricted by the bright sunshine. A remarkably low seat for an adult!

Character 3.5/5: 2 recently redeveloped stands; a terrace; an older stand. One set quite far back behind a goal. It did have a bit of a rugby feel to it (unsurprisingly) but for all this it have a slightly charming feel to it.

Stewarding 4/5: Helpful to point out location of seats; otherwise unseen. Very hospitable to let me take pictures from different parts of ground.

Overall 3/5: An enjoyable day out at an average game.