Blogger Katie recounts a trip to the Selhurst Park, the home of Crystal Palace as she continues her journey to reach the 92 club before turning 30.

Thoughts on the ground:
Selhurst Park is a traditional old ground with 4 big stands very close to the pitch. The away fans are located in the Arthur Wait stand which holds nearly 10,000 fans. My issue with this stand (being the titch that I am) is that the rows are fairly shallow so if there’s anyone stood in front of me that’s over 5″5 I end up watching the game through the back of their head. I’m not sure it’s that easy to get a good view in the away section though as further back there are huge pillars which can block the view of the pitch.

To the right of the Arthur Wait stand is an odd stand which seems to be more corporate boxes than seats. The stand opposite is another old fashioned main stand with plenty of pillars running down the full length of it. Finally, to the left of the Arthur Wait stand is the Holmesdale Road stand which houses the Crystal Palace “ultras” who generate a fair bit of noise. I’ve visited Palace a couple of times and the atmosphere has always been good though sometimes it would be nice if the guy with a drum could give it a rest. 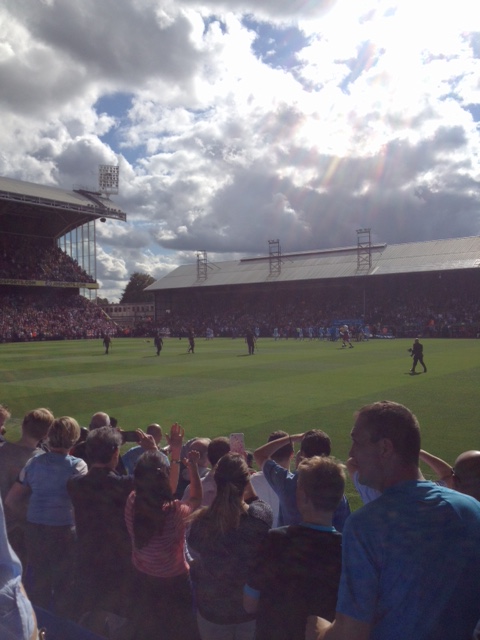 One of my major complaints about Crystal Palace is the facilities. The first time I went to Selhurst Park there were mile long queues for the ladies toilets but I dismissed this as the stand was built in the 60s when not many women went to football games. However, the section has had a big refurb during the close season (you could still smell the paint) and yet the powers that be decided that 3 ladies toilets would be adequate in a section which holds around 2 and a half thousand fans. Funnily enough, it isn’t!

Thoughts on the game:
The game kicked off with City fans in a pretty confident mood after recent results. There wasn’t much of note football wise in the first half apart from when Scott Dann decided to hack at Sergio Aguero on 25 minutes which meant that we saw the debut of Kevin de Bruyne much earlier than anticipated. He looked bright, sharp and was always looking for the forward pass which nearly worked wonders early on in the second half. KdB played a cracking ball through to Navas who rounded the keeper with great composure and then proceeded to fall over and fire the ball into the side netting. We were still discussing it 20 minutes later it was that bad.

It looked like the game was going to peter out into a draw when on 89 minutes we brought on the young lad Kelechi Iheanacho. 54 seconds later he got on the end of a loose ball in the box and fired home our winner. Cue madness in the away end!

The programme at Palace is £3.50 which I guess is fairly standard. I find that it’s one of the best in the league with plenty of reading material and a good section on City. There’s also a ‘Sponsor the Crystals’ page where you can show your support for Charli, Neesha, Malika, Stacey and the other girls.

Value for money 3.5/5: Around £40 is pretty average in the Premier League these days unfortunately.

Overall 4/5: A cracking day out thanks to Kelechi

You can keep up with Katie and her mission to do the 92 before her 30th on Twitter @katiemcmillan90, her blog (https://92before30.wordpress.com/) and her the92.net profile. Have you ticked off the Selhurst Park? Add it to your 92 here www.the92.net/ground/selhurst-park or plan your visit using our away day planner here www.the92.net/plan-your-away-day/selhurst-park.