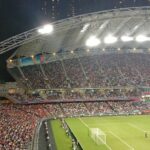 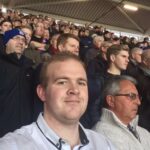 2017 started in style for ground hopper Jason Lintern. The Crystal Palace and Bristol Rovers fan completed the 92, a journey that for many will take a lifetime, well before reaching 30! We caught up with Jason to find out more about his journey doing the 92. Groundsman: Firstly congratulations on completing the 92! Which was your final ground and did you commemorate the occasion? Jason: Thanks! West Ham’s new ground, the London Stadium was my final one. I just celebrated on the day with a few beers with friends, but i’m looking to get a ’92’ themed tattoo later… Read more » 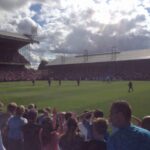 Blogger Katie recounts a trip to the Selhurst Park, the home of Crystal Palace as she continues her journey to reach the 92 club before turning 30. Ground: Selhurst Park Game: Crystal Palace 0-1 Manchester City Date: 12/09/2015 Thoughts on the ground: Selhurst Park is a traditional old ground with 4 big stands very close to the pitch. The away fans are located in the Arthur Wait stand which holds nearly 10,000 fans. My issue with this stand (being the titch that I am) is that the rows are fairly shallow so if there’s anyone stood in front of me… Read more » 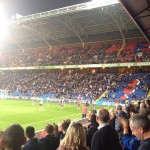 Blogger Tim Dove enters the final furlong of his 92 with a visit to Selhurst Park, the home of Crystal Palace. Ground: Selhurst Park 82/92 Game: Crystal Palace 2-3 Newcastle AET Date: 24/09/2014 Thoughts on the ground: Located just a short walk from the Selhurst train station Selhurst Park feels like a traditional ground but has obviously seen recent redevelopment. The stands behind the goal are the most recently re-developed at the ground. The two-tiered Holmesdale Road Stand at one end is where the noisiest home fans sit. This stand has a large lower tier, with a smaller upper tier… Read more »