Blogger pb1uk completes a hat-trick of visits to the One Call Stadium, the home of Mansfield Town. Yeovil were the visitors as the Somerset side sought to continue their impressive run of form under new boss Darren Way.

Following Yeovil hasn’t been a pleasant experience in recent years. Since reaching the Championship in 2013 the club have been relegated in each of the last 2 seasons finishing bottom of the league. Being a Midlands exile I usually can only make a handful of Yeovil matches per season and racking my brains couldn’t remember that last time I’d seen them win in the flesh (at least 3 years!). After a poor first half of the season there were green shoots of recovery for the Glover’s. Off the back of a pair of 1 nil wins they were undefeated in 4 and had moved a few points above the drop zone. 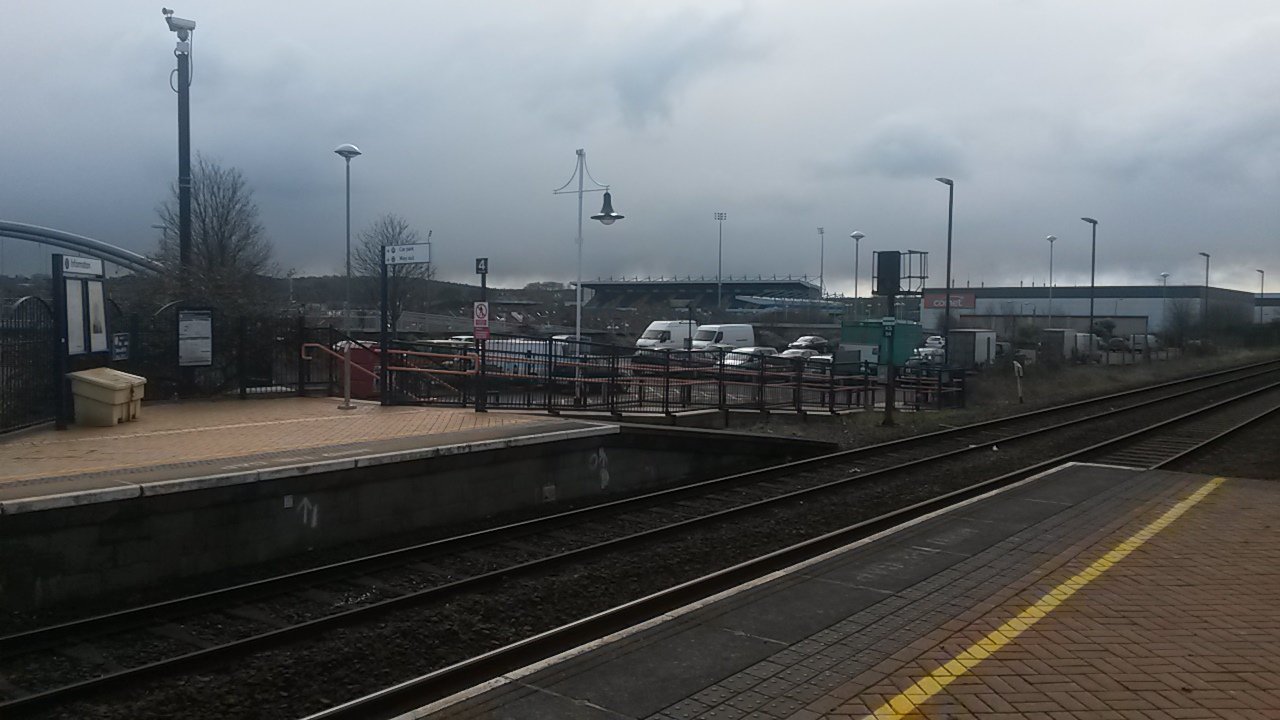 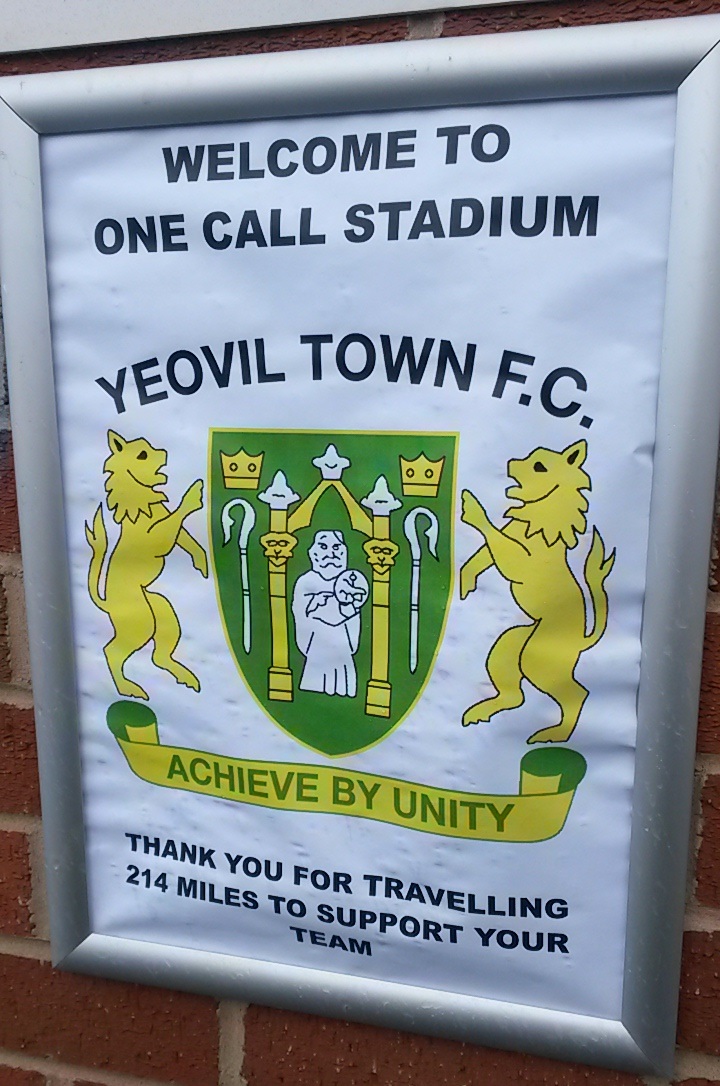 Mansfield had enjoyed a much better first half of the season and were looking like surprise play off contenders. However their run had been stuttering of late and was at best inconsistent with 2 wins, 2 defeats and a draw in their last 5 outings.

The One Call Stadium had not been a happy hunting ground for me in my past 2 visits. I support Southampton and Yeovil (I won’t bore you with reasons why now!) and in my maiden visit I saw a Harry Redknapp managed Saints side lose 1-0 in the Carling Cup unable to score past the considerable frame of veteran Kevin Pressman. The following season I saw arch rivals Portsmouth beat the Stags 2-1, again a Carling Cup Fixture. To make matters worse it was after Redknapp had returned to Pompey after taking Saints down.

On the search for a place to grab a pre-match pint there was a recurring theme on various reviews; away fans generally weren’t too welcome. Indeed one site said to avoid any pub in the town centre! Travelling by train there was a positive report of the Midland Hotel, conveniently located next to the station and with Sky for the early kick off. From the outside it looked like it had seen better days, but we received a warm welcome both before and after the game. Giving the Town centre establishments a miss we made the short 10 minute walk to the ground, which has a bar in the back of the Ian Greaves stand called the Sandy Pate Bar. The atmosphere was decent inside with a good mix of home and away fans with plenty of screens for people to enjoy the North London Derby. 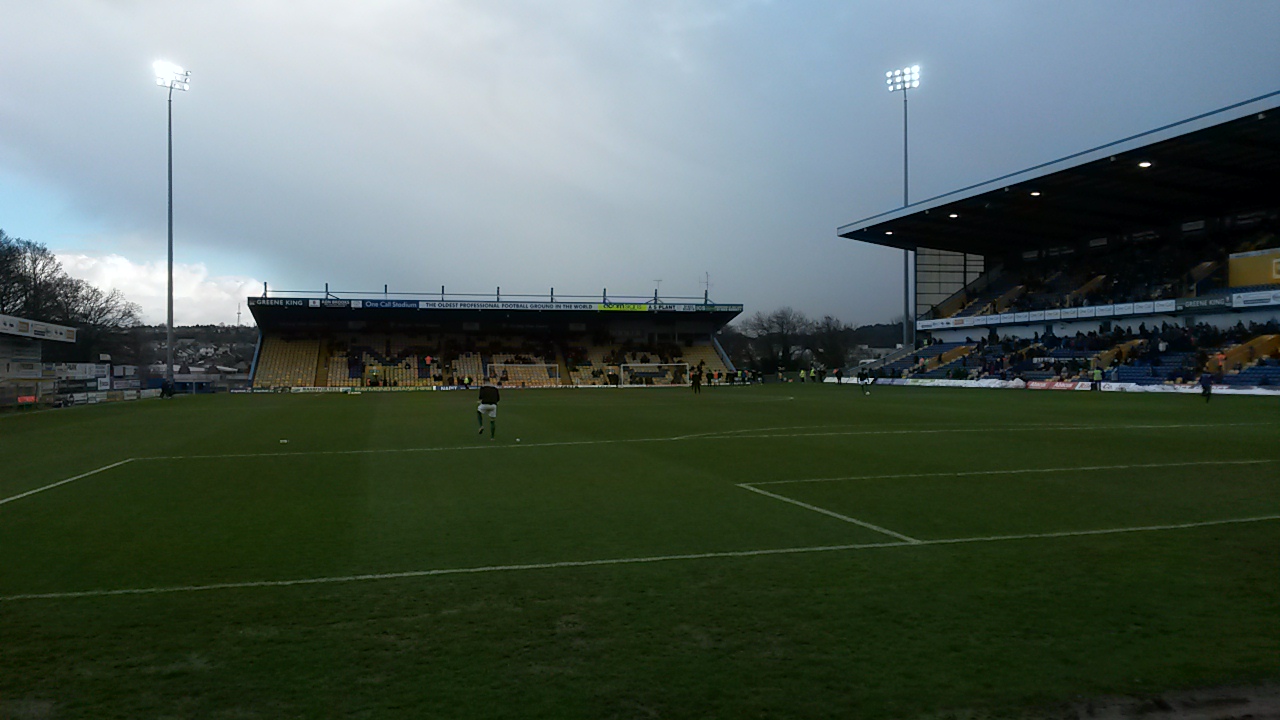 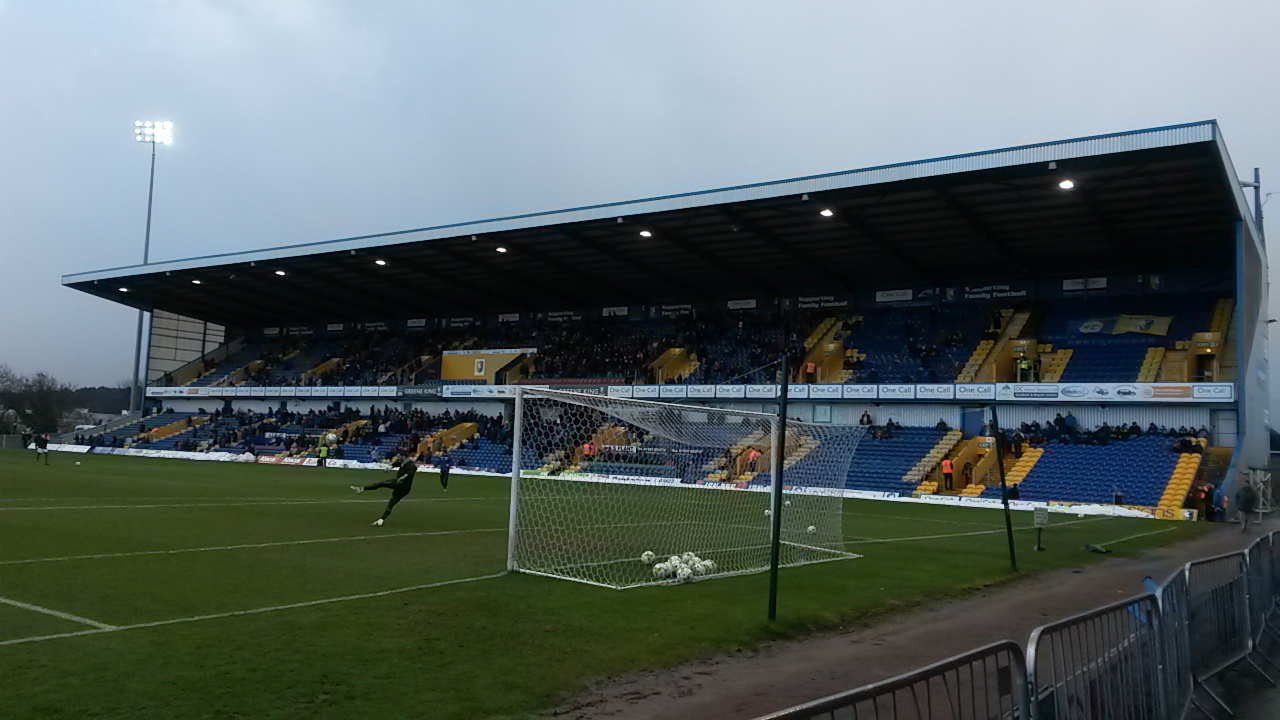 The Ian Graves stand is the main stand at Field Mill holding just below 5500 fans. Behind each goal sit similar looking stands holding around 1900. All 3 stands were rebuilt in the late nineties/early noughties. On one of these, the Quarry Lane End, behind the South goal the front of the roof holds the words “The Oldest Professional Football Ground in the World’. Upon further digging the site has played host to the beautiful game since 1861 with some reports dating back to the 1850’s (good old Wikipedia!). The ground does have shades of when I ticked Vicarage Road off my 92 with the Bishop Street Stand, which is opposite the main stand, currently out of use after being condemned. The small stand situated in the middle either side of terracing is boarded up and plastered with advertising in front of which sit the dug outs. I’m sure both managers appreciate this as they are away from any potential abuse coming from over their shoulders for once.

Onto the game and it wasn’t one for the purists! The home side had the better of the first period, but the visitors off the back of 3 clean sheets looked fairly comfortable. The best chance fell to Reggie Lambe from a corner, but he snatched at the shot which was sliced high and wide. In the second half Mansfield did create a number of openings but failed to take their chances. The conditions helped neither team as a hail storm on the hour mark left its mark. Striker Matt Green was twice denied by Krysiak as well as having an effort ruled out for offside. Lambe was again involved as his pile driver cannoned back off the bar with Baxendale inexplicably heading the rebound over an unguarded net. 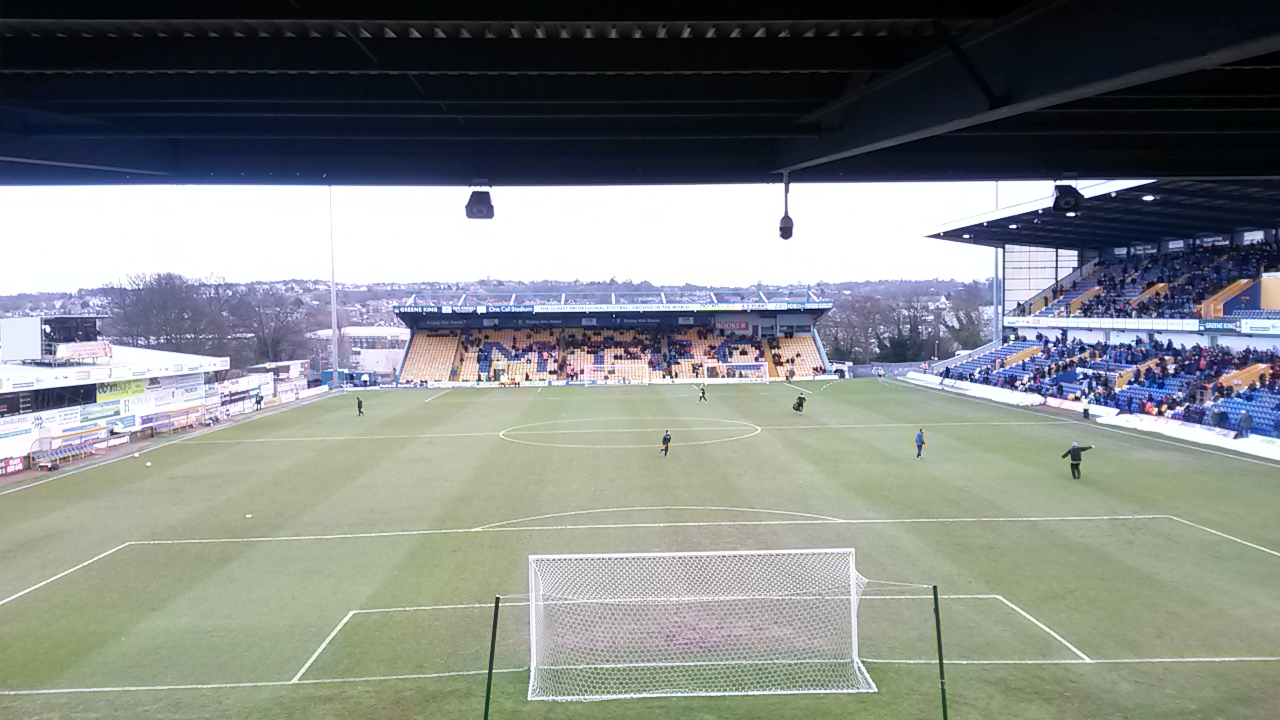 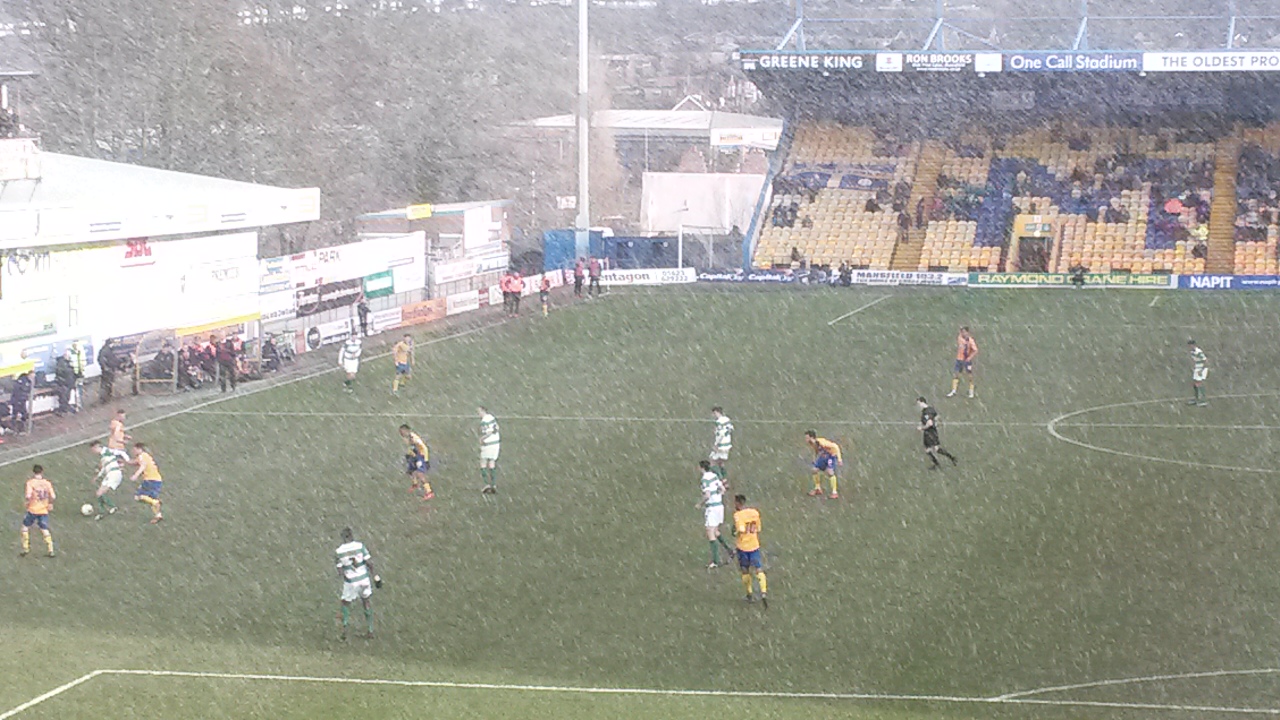 Despite these chances Yeovil were growing more and more into the game knocking the ball about nicely but lacking the final incisive touch to create a clear cut chance. There was no sign of shutting up shop and taking a point as you might expect from a relegation threatened side away to play off chasers. This approach paid off for the Glovers and was perfectly encompassed in the winner. Left back Ryan Dickson cut inside, advanced into midfield and passed to West Brom loanee Tahvon Campbell who slipped the ball into substitute Brandon Goodship. The Bournemouth loanee got to the byline and slid in a low cross which was expertly finished by Ryan Dickson, who had continued his run into the box, to send the away fans into raptures. 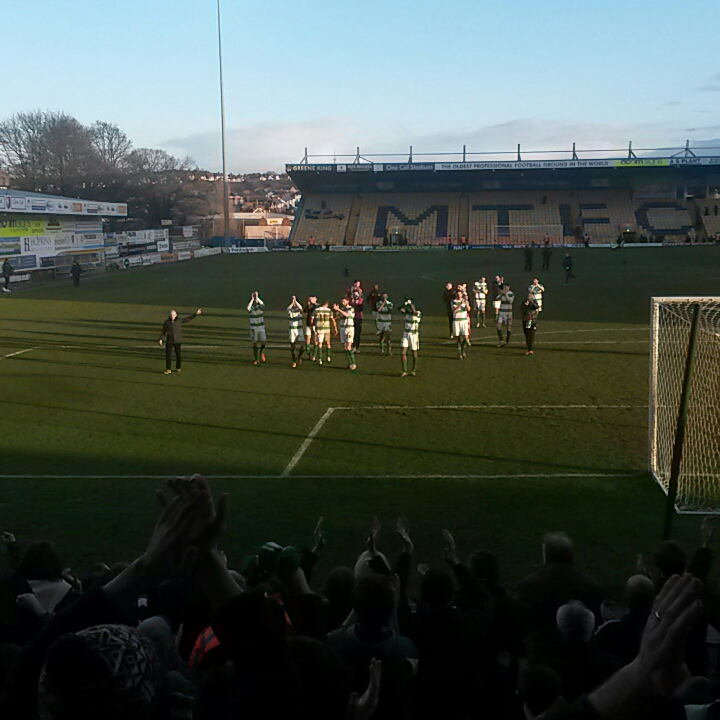 Atmosphere 2/5: Very poor from the home fans who made minimal noise. In the Ian Greaves Stand there were clappers on seats, as have been seen and indeed heard in the King Power this season, but they didn’t catch on at this game.

Location 3/5: Short walk from the station and easy to find.

Value for money 3.5/5: £18 for an away ticket is decent in today’s game, however it was a bit odd that the game was all ticket for away fans.

Pint Rating 3.5/5: They weren’t bad, put it that way. At half time we got the last 2 Bulmer’s from the bar in the ground, which considering Yeovil’s association with cider can’t have gone down well with the remainder of the queue.

Character 2.5/5: The 3 stands in use are pretty similar to standard modern stadium architecture. If the condemned stand was in use it would add a much needed bit of character back in.

Stewarding 4/5: Nice bit of banter on the gate.

You can keep up with Peter’s 92 on his the92.net profile here. Have you been to the One Call Stadium before? Add it to your 92 www.the92.net/grounds or plan your trip using our away day planner www.the92.net/plan-your-away-day/. the92.net is a free service open to all football fans. Register now to create your 92 plus rate and review the grounds as you go!