Today we catch up with Andrew Chapman, a passionate Plymouth fan who helps to run their Greens on Screen fan page, which is partially endorsed directly by the club.  On his journey into the realms of the 92 club, and where he learnt his love of football through is late dad, and is now passing on his love of football to a new generation.

Groundsman: Firstly, congratulations on completing the 92!!! Which was your final ground and how did you mark the occasion?
Andrew: Broadfield Stadium, home to Crawley Town took me to the 92. It was actually my team Plymouth’s second visit there, but I missed it the first time around due to a holiday. I kept it quite low-key but a few friends knew so I got some handshakes and back slaps at the game, and a couple of Facebook threads spurned from it. I couldn’t even have a drink to celebrate it, as it was a 4-hour drive there and back, for me, from Leeds!

Groundsman: What was the first ground you ticked off your list?

Right at the start – Andrew and his late Dad behind the scarf at the front en route to Wigan in April 1986.

Andrew: Elm Park, the then home to Reading in December 1985, in Dave ‘Ciderman’ Smith’s 1985-86 promotion season started my journey to the 92. I got there on the train, with my Dad, from Plymouth. I remember getting off at Reading West Station full of excitement. Reading had set a record of 13 consecutive wins from the start of that season – we were 3-0 up and coasting at HT, doing the conga around the away end. We then had a man sent-off (in the days when such things were still rare) and went on to lose 4-3. I vowed to never return to Elm Park – and never did. The next time I went to Reading, they have moved into the Madejski Stadium! 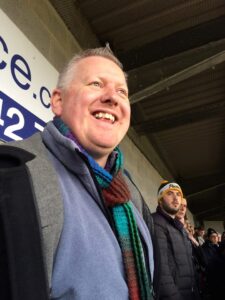 Andrew completing the 92 at Broadfield Stadium, but without a beer!

Groundsman: How long has it taken you to join the 92 club?
Andrew: For that first match at Reading, I would have been just 12 years old, I’m now 42, so it’s taken me pretty much the best part of three decades to do the 92 ! Surprisingly, that first away game didn’t put me off!

Groundsman: When did you realise you were hooked on being a ground hopper?
Andrew: Probably those early matches with my Dad – I also did Wigan, Bournemouth, Cardiff and Darlington that season – I think it was the whole match-day experience – the journey, a new town, spotting the proper floodlights from afar, not that you can do that much nowadays! I really got into it when I went to University in London in the early 1990s, as it was a good way of reconnecting me with all things Plymouth whilst I was away from home. 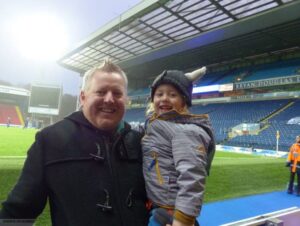 Andrew and son Linus at Ewood Park in January 2016.

Groundsman: Which ground was your favourite over the course of your journey into doing the 92?
Andrew: Probably Darlington’s old Feethams ground. I only went twice, won both and on both occasions ended up legging it over their pitch in delirium after clinching a runners-ups promotion spot there in 1985-86. Then winning our first silverware since 1959 in the 2001-02 season. It’s a shame it has gone – especially for the ‘white elephant’ of an Arena which ultimately cost the club their existence.

Groundsman: And your least favourite?
Andrew: Nowhere is that horrid actually – it’s all part of the away day ‘experience’. That said, the away end at Kenilworth Road is something to behold, and I’ve had very little pleasure from any trip to Turf Moor, results-wise, even if the pies are quite good. I’d still rather Luton’s away end then any sterile, anodyne replacement identikit ground, though! 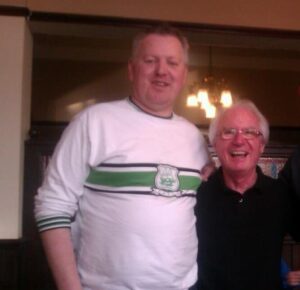 Andrew with Syd Little at Fleetwood

Groundsman: What are the lasting memories of your travels?
Andrew: Rochdale, from London, in October 1999 with another well-known Argyle fan, “Loud”. We were on a train out of Kings Cross with loads of Watford fans en route to Old Trafford. The train broke down and was delayed quite a long time in Nuneaton. Eventually, Virgin said they were organising coaches for everyone, well, “for all the Watford fans”, and having asked anyone else to identify their travel needs to them, which we had proceeded to announce loudly, that the “two Plymouth fans have had a taxi ordered for them”, you can imagine the song which followed from the Watford fans and the stick we got! The story, unfortunately, didn’t end there either. We jumped in a taxi there, having been dropped at Manchester station, where the train terminated, and the guy’s gearbox literally imploded as he drove away from Piccadilly. I handed my cash over just as the referee blew to start the game; how we made kick-off, I will never know! And of course, after all, it ended up a non-descript 0-0 draw!

Meeting Syd Little, of Little and Large fame, at Fleetwood, was pretty neat too!

Groundsman: Now the 92 is complete, what future groundhopping plans do you have?
Andrew: I’m already on it, Scotland, currently on 19 out of the 42 there. Would like to ‘do the 134’ – is there a club? If not, there should be!! Not quite sure what I’ll do after that, though, but will probably involve encouraging my son a bit more!! 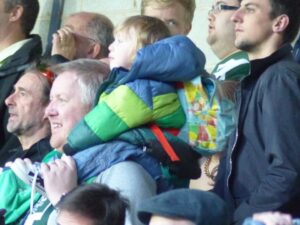 Andrew’s Son’s first ever away game at the Pirelli Stadium, Burton, Nov 2014

Groundsman: Unfortunately we don’t have any plans to branch out, but then there is always the Welsh league grounds?

Groundsman: Finally, as we all know the 92 can sometimes only last a season if relegations and promotions go against you – who will you look to come up from the Conference?
Andrew: I like to see a former league club return each year – but I also like to see a newbie given a crack at the FL life – so any new teams are always quite exciting. So looking at the current table, Forest Green or Gateshead, and yes, I know technically they would be returning, but albeit from a long time ago, it would be quite exciting.